Endoscopy in Practice: A Penny for Your Thoughts 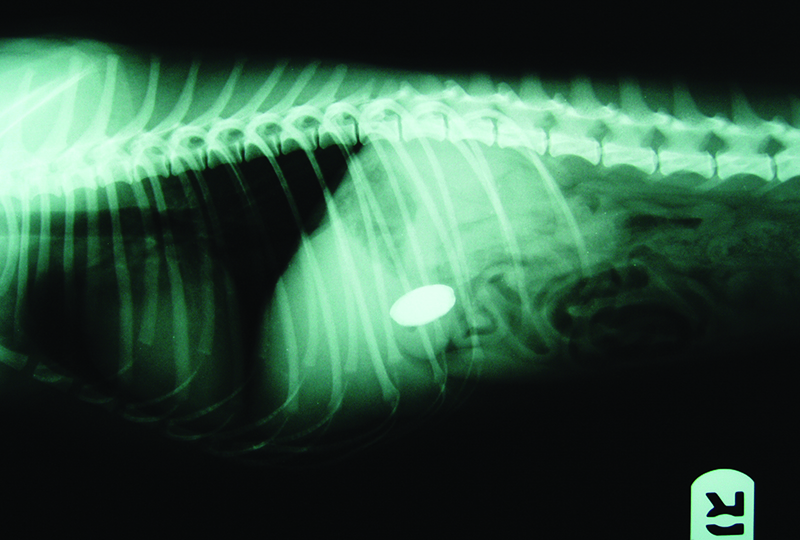 Dr. Honeckman illustrates the importance of endoscopy with a case study of an emergency endoscopy performed on a Jack Russel terrier experiencing anorexia, weakness, and vomiting.

For those unable to attend, this column provides the opportunity to experience the excellent education provided at the Institute. Visit navc.com/institute for further information.

At the NAVC Institute 2014, veterinarians were introduced to small animal endoscopy and common procedures in clinical practice that utilize rigid and flexible endoscopy. The course incorporated lectures with hands-on wet labs. Lectures focused on:

For the wet labs, both live animals and models were used, and each participant—under the supervision of a board-certified specialist—practiced:

Participants performed endoscopic retrieval of cotton balls from the stomach, and the techniques, equipment, and required skills for this procedure are similar to those highlighted in the following case study.

A 1-year-old neutered male Jack Russell terrier was presented to its primary veterinarian for acute onset of anorexia, weakness, and vomiting. The owner noted that the urine of the dog was red in color.

Pertinent blood analysis results are listed in the Table; other than those values, the complete blood count, serum biochemical profile, and blood smear examination were unremarkable.

Urinalysis revealed hemoglobinuria and bilirubinuria, but no red nor white blood cells were identified on microscopic sediment examination.

A presumptive diagnosis of immune-mediated hemolytic anemia (IMHA) was determined.

Treatment included a blood transfusion and initiation of immunosuppressive therapy. Injectable medications (dexamethasone, 0.25 mg/kg IV, and cyclophosphamide, 200 mg/m2 IV) were administered rather than oral medications because the dog was vomiting.

While the packed cell volume was 34% immediately posttransfusion, by the next morning, it had dropped to 22%.

Based on the response to initial treatment, the dog was referred for additional diagnostics and more intense management of IMHA.

Due to the vomiting, abdominal radiographs were obtained (Figures 1 and 2). The radiographs revealed the presence of a metallic gastric foreign body, likely a coin. This finding, in conjunction with hemolytic anemia lacking spherocytes and agglutination, was consistent with zinc toxicity.

Figures 1 and 2. Presence of a metallic gastric foreign body, likely a coin, in conjunction with hemolytic anemia lacking spherocytes and agglutination, is consistent with zinc toxicity. 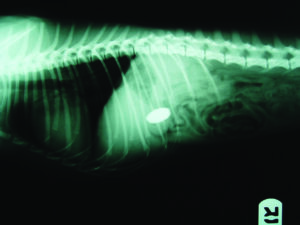 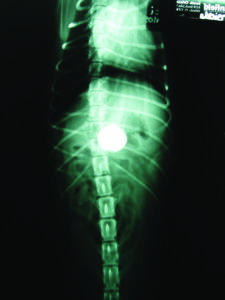 A diagnosis of intravascular hemolysis from zinc toxicity, rather than immune-mediated hemolysis, was made. Immunosuppressive therapy was discontinued.

An emergency endoscopy was performed, and a penny was removed from the stomach (Figure 3). A lateral radiograph was obtained postendoscopy and confirmed removal of all foreign bodies (Figure 4). 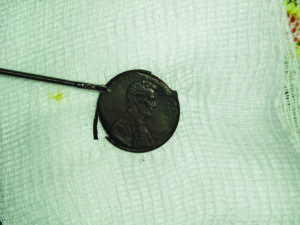 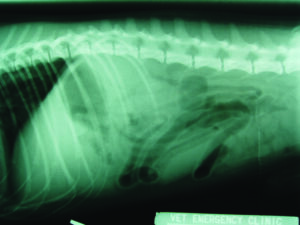 After endoscopic retrieval of the penny, along with administration of intravenous fluids and famotidine, the patient made a complete recovery. No chelation therapy was required for the zinc toxicity.

In a review of 19 dogs with zinc intoxication, most of the dogs were successfully treated with endoscopic retrieval of zinc foreign body and supportive care (IV fluids, blood products, H2 blockers, sucralfate). Chelation with Ca-EDTA was only used in 2 dogs. Of 19 dogs, 17 survived, and most were released from the hospital within 2 to 3 days.5 In another study, the half-life of plasma zinc levels was approximately 7.6 days.2

Abdominal Ultrasonography for Masses. Ultrasonography readily identifies liver masses, splenic masses, and hemoabdomen, and can also be useful for diagnosis of some causes of anemia. While GI masses can be detected, gas can interfere with imaging of some masses. In my experience, intestinal masses are easier to detect than gastric masses, and endoscopy may be needed to detect the latter.

The quality of ultrasonographic evaluation depends greatly on the experience and training of the person performing the examination.

In the other study, radiographs were only diagnostic in 70% of dogs with obstructive intestinal foreign bodies, while ultrasound was diagnostic in 97% of patients.7

Role of Radiography. Although ultrasound was sensitive for diagnosing obstructive intestinal foreign bodies, it has been my experience that ultrasound is not as useful in detecting gastric foreign bodies due to gas interference.

Contrast Studies. Barium is generally the preferred positive contrast agent for most cases (see Step-by-Step Approach to Upper GI Barium Study). However, barium should be avoided in patients suspected of having a GI perforation (ie, free air or fluid in the abdomen). Barium can also clog the biopsy/suction channel during endoscopy; therefore, its presence in the stomach is a relative contraindication if endoscopy is anticipated.

In most cases, to perform an upper GI barium study:

Ideally, lesions should be visible in multiple time periods to confirm that they represent real findings.

Pneumogastrogram Studies. Air gastrogram studies, which are performed by passing an orogastric tube and administering 13 mL/kg of room air into the stomach—are underutilized in most small animal practices. The advantages of using room air as contrast include:

When IMHA Doesn’t Respond to Therapy

IMHA may not respond to therapy due to:

The other important reason that a patient fails to respond to therapy is an incorrect diagnosis. Although IMHA is probably the most common cause of hemolytic anemia in dogs, other differential diagnoses (that should particularly be considered if the patient is exhibiting intravascular hemolysis) include:

In the case study presented here, the diagnosis of IMHA was questioned due to unusual signalment, lack of autoagglutination/spherocytosis, and presence of vomiting.

However, lack of regeneration, as seen in this case, can be seen in cases of IMHA. In one study, approximately 70% of dogs with IMHA had reticulocytosis, whereas 30% did not have evidence of regeneration.8 Since it takes 3 to 5 days for bone marrow to respond and increase the reticulocytes in circulation, in acute cases, the anemia is nonregenerative initially.

Also, some cases of immune-mediated anemia target the red blood cell precursors in the bone marrow, which can result in nonregenerative anemia.

Radiography. Vomiting is not common in dogs with IMHA, making radiographs an important part of the diagnostic workup. Zinc-induced hemolytic anemia was suggested based on the presence of a metal gastric foreign body found on survey radiographs.

When to Refer. Due to the risk of complications, esophageal foreign bodies should be referred, if possible. Gastric foreign bodies (especially coins), on the other hand, can often be successfully retrieved by veterinarians in general practice with endoscopic training.

Would you like to learn more about endoscopy? Look for the first article in our new Endoscopy Essentials column, which begins in the January/February 2015 issue of Today’s Veterinary Practice.

Endoscopy, like any other skill or procedure in veterinary medicine, requires training and practice. The Introduction to Small Animal Endoscopy Course at the NAVC Institute in May 2014 provided an excellent foundation for the participants, who were encouraged to gain more training and experience so that they could incorporate endoscopy in their practices.

Adam Honeckman, DVM, Diplomate ACVIM, owns a mobile internal medicine practice in the Orlando area, and is an internal medicine consultant for the Veterinary Information Network. He received his DVM and completed an internship at Purdue University School of Veterinary Medicine. He practiced in the Chicago area, then accepted a small animal internal medicine residency at the Animal Medical Center in New York City. There he developed a special interest in ultrasonography and endoscopy.