Ultrasonography of the Adrenal Glands

Part of our series on ultrasound evaluation of specific abdominal organs/systems, this article reviews ultrasonography of the adrenal glands.

Elizabeth Huynh, DVM, is a diagnostic imaging resident and graduate student at University of Florida College of Veterinary Medicine. Her interests include ultrasonography, cross-sectional imaging, and nuclear medicine. She received her DVM from Ross University, finished her clinical year at Ohio State University, and completed a diagnostic imaging internship at Animal Specialty and Emergency Center in Los Angeles, California.

Welcome to our series of articles on small animal abdominal ultrasonography. The initial articles provided an overview of basic ultrasonography principles and a discussion about how to perform a systematic scan of the abdomen. The rest of the series discusses ultrasound evaluation of specific abdominal organs/systems.

Read the other small animal abdominal ultrasonography articles published in Today’s Veterinary Practice on the website.

The following are anatomic landmarks that help identify the location of the left adrenal gland: 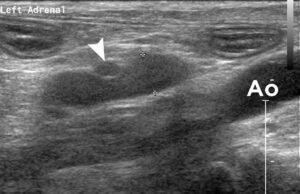 FIGURE 1. Longitudinal axis view of the left adrenal gland including the phrenicoabdominal vein (white arrowhead) on the ventral aspect of the adrenal gland in a dog. Ao, aorta. 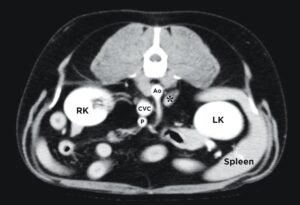 The left adrenal gland is slightly lateral and ventral to the abdominal aorta and sits adjacent or caudal to the celiac and cranial mesenteric arteries.1,4,5

The caudal pole of the adrenal gland is localized cranial to the “hook” of the left renal artery and its origin from the left lateral margin of the abdominal aorta (Figure 3). 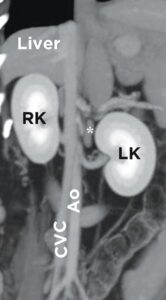 The left phrenicoabdominal artery is noted along the dorsal surface of the left adrenal gland. Without color Doppler ultrasound, it may not be visible.

The left phrenicoabdominal vein, seen in the near field or ventral aspect of the adrenal gland and transecting it into equal cranial and caudal poles,1 is an inconsistent finding using gray-scale 2D imaging but, when present, helps confirm the localization of the left adrenal gland.

It is uncommon to see a distinct cortex and medulla in cats unless using a high-resolution linear transducer (Figure 4). 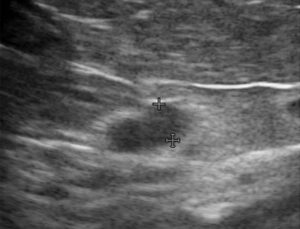 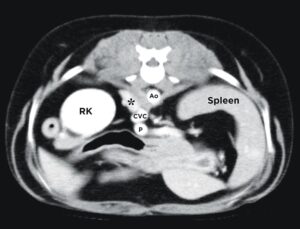 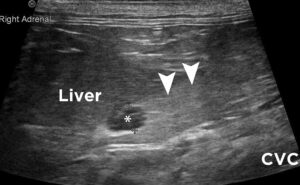 FIGURE 7. Longitudinal axis view (A) without and (B) with color Doppler of the V-shaped right adrenal gland of a dog, adjacent to the caudal vena cava.

The left adrenal gland has variable shape in dogs (Figure 8) but is consistently oval or bean shaped in cats (Figure 4).6

The shapes seen in small-breed dogs include a dumbbell or biconcave disc shape (similar to a cross-section of a red blood cell). In medium- and large-breed dogs, the left adrenal gland may have a pancake or lawn-chair shape (Figure 8). All of these shapes are considered normal variants. 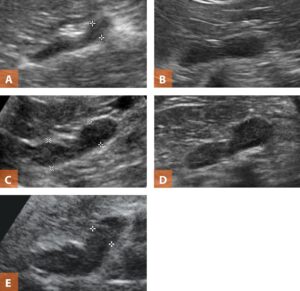 The left adrenal gland in dogs is hypoechoic relative to the surrounding retroperitoneal fat, and often a hyperechoic oval stripe can be visualized in the middle of the gland. This stripe is assumed to be the delineation between the adrenal medulla (hypoechoic) and outer cortex (hypoechoic).2,3 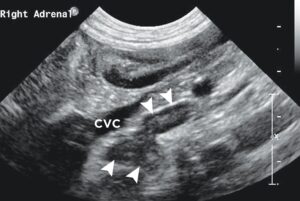 Pathology of the Adrenal Gland

Small adrenal glands can be seen in dogs and cats with iatrogenic or spontaneous hypoadrenocorticism (Figure 10).2,3,11,12

FIGURE 10. Longitudinal axis views of the (A) right and (B) left adrenal glands of a dog with iatrogenic hypoadrenocorticism. Note the small size of both adrenal glands, measuring approximately 0.3 cm in height.

The adrenal glands of dogs with pituitary-dependent hyperadrenocorticism can be normal sized, be bilaterally enlarged (hypertrophic) with a normal shape and increased caudal pole width/height (Figure 11), or have nodular hyperplasia.2,3,7,13–15 Often there is an accompanying steroid-induced hepatopathy, such as a generalized increase in echogenicity, hypoechoic nodules that are ill-defined, hyperattenuation of the ultrasound beam, and biliary debris (Figure 12).2,3,16–19 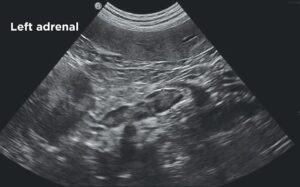 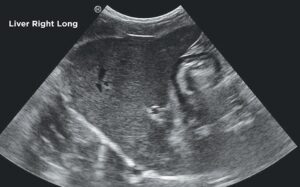 FIGURE 12. Longitudinal axis views of the right division of the liver in a dog diagnosed with vacuolar hepatopathy. Note the diminished portal wall markings that are consistent with a hyperechoic hepatic parenchyma.

Focal enlargement, such as hyperechoic or hypoechoic nodules, can be present in the adrenal glands and can represent benign or malignant lesions (Figure 13).7,13–15 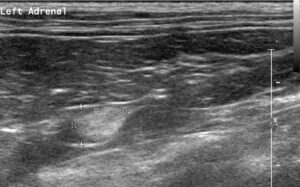 FIGURE 13. Longitudinal axis view of the left adrenal gland of a dog with an oval, well-defined, hyperechoic nodule in the caudal pole of the adrenal gland. This nodule is presumed to be secondary to hyperplasia or myelolipoma; however, an adenoma cannot be ruled out.

Benign adenomas can be unilateral or bilateral and functional (glucocorticoid secreting) or nonfunctional.2,3,20,21

Marked enlargement >2 cm of the adrenal gland is usually associated with malignant etiologies, such as adenocarcinomas or pheochromocytomas (Figure 14). Adenomas and adenocarcinomas are more likely to be mineralized,22,23 and malignant tumors often invade the phrenicoabdominal vein and/or caudal vena cava (Figure 15).2,3,20–22,24 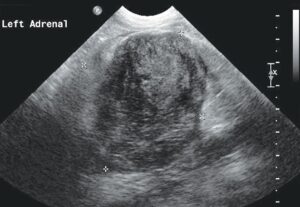 Mineralization of the adrenal glands in cats is an age-related change that has not been reported to have clinical significance (Figure 16).13,25

Adrenal tumors are much rarer in cats than in dogs; however, aldosterone-secreting tumors, resulting in Conn’s syndrome, have been reported (Figure 17).2,3,26–32 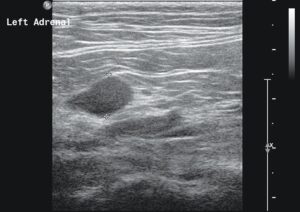 The vascular anatomy is key to adrenal gland localization. The ability to routinely identify the adrenal glands is a standard part of the complete abdominal ultrasound evaluation. The most common observed abnormality of the adrenal glands is enlargement, which can take the form of hyperplasia, nodules, and masses. In cats, mineralization is seen as an incidental age-related change.