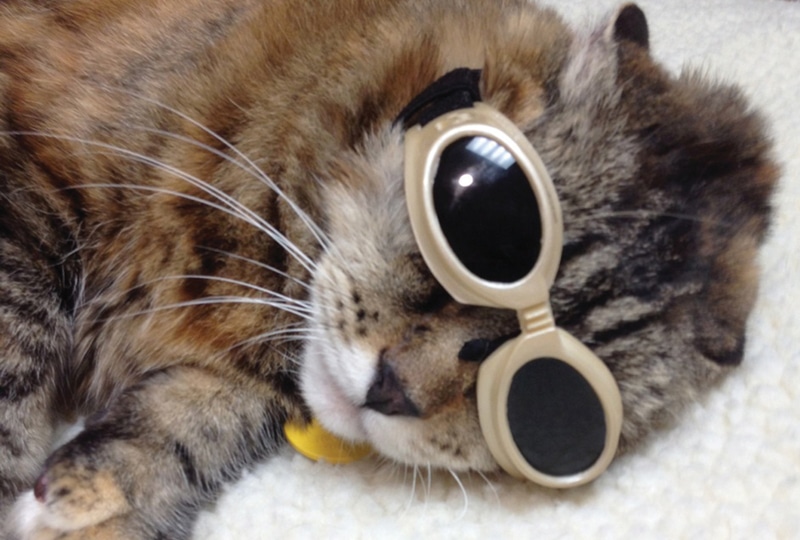 Laser therapy use is on the rise in veterinary medicine. Discover the properties of lasers, how they work, and their use in wound healing, pain management, and rehabilitation in the small animal patient.

The use of laser therapy in small animal patients has been on the rise over the last several years. More and more information is becoming available about the different uses and benefits of lasers.

Unfortunately, from an evidence-based medicine perspective, there is very little information in the veterinary literature. Therefore, current thoughts regarding therapeutic benefits of laser therapy are mainly derived from human and laboratory studies and subjective experiences, that is, anecdotal evidence. Lack of objective, evidence-based observations and studies makes it difficult to evaluate the true therapeutic value of lasers.

The intent of this article is to:

Each reader is encouraged to seek evidence-based studies to determine whether your patients can benefit from laser treatment, not only for rehabilitation, but for other uses as well.1

WHAT IS LASER THERAPY?

The light produced by a laser, which is an acronym for light amplification by stimulated emission of radiation, has the ability to be absorbed by tissues, creating both photothermal and photochemical reactions that create a therapeutic benefit.

The initial form for rehabilitation purposes used low-level laser therapy (LLLT)1 as opposed to the high power used in surgical lasers, which apply heat to cause thermal destruction of cells and tissues. New therapeutic lasers have recently emerged that deliver more power than LLLT, but less power than surgical lasers.

For rehabilitation, exact interaction between lasers and tissues is not completely understood. However, lasers have been shown to modulate cellular functions. For example, LLLT helps modulate various biologic processes that enhance:

HOW DO LASERS WORK?

Lasers are created by activating electrons to an excited state.5 Once the electron moves from an excited state to its ground state, release of photons occurs, and they form a beam of light.

Many types of lasers are available for purposes ranging from industrial to medical; in veterinary medicine, they are most commonly used for surgery, rehabilitative therapy, management of chronic conditions, and pain control.

Lasers consist of a monochromatic, coherent, collimated light; these properties help distinguish between laser light and light generated by other sources, such as sunlight.

Tissues interact with lasers in varying ways, allowing light to be reflected, scattered, transmitted, or absorbed.

The Benefits of Absorbed Photons

A chromophore is responsible for a molecule’s color and, in biologic molecules, undergoes a conformational change when hit by a light, such as a laser. This change in the chromophore excites cells and can possibly alter, or speed up, cellular reactions.Commonly noted chromophores include hemoglobin, water, melanin, proteins, and amino acids.1 The thought process is that these compounds—when exposed to laser light—cause alteration of cellular functions, allowing increased healing and/or recruitment of secondary mediators to facilitate healing.

Wavelengths are typically measured in nanometers (nm). Wavelength is important when determining the biological effect of lasers on tissues. Tissues, such as melanin and proteins, absorb ultraviolet light (100–400 nm). Light on the other end of the spectrum (1400–10,000 nm) is absorbed by water. Therefore, optimum wavelength ranges of 600 to 1200 nm—which minimize scatter and maximize absorption—are recommended for tissue penetration (Figure 1). 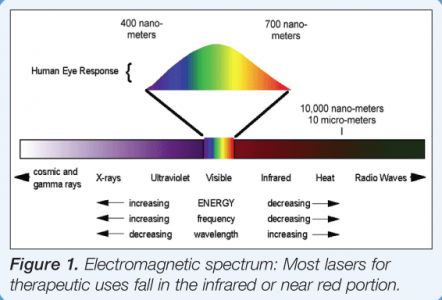 The power density or intensity indicates the amount of power in a given surface area, while the spot size of the laser indicates the surface area size that can be treated when the laser is held stationary. Lasers with larger spot areas have a more homogeneous passage of the photons with less scatter.

The energy of the laser characterizes the power emitted over time, measured in joules. Frequently, energy density is used to report dosage of the laser in joules per cm2 (J/cm2).

Continuous or Pulsed Emission of Photons

Photons can be emitted either continuously or by pulse.

Currently, there is debate for superiority of continuous versus pulsed therapy. Some have suggested that there is no difference,1,6 while others have shown that pulsed therapy may be more effective.7

Laser classification is based on wavelength and maximum output in power or energy. Current classifications consist of class 1 through 4.

Class 1 lasers are very mild and safe. They include lasers used in everyday life; for example, those used in equipment that implements bar code scanning, such as cash registers at the supermarket.

Class 2 lasers are in the visible light spectrum (400–700 nm). Some therapeutic lasers and laser pointers fall into this class. Damage can occur if the laser is directed into the eye for prolonged periods.

Class 3 lasers (Figure 2) include the commonly used therapeutic lasers. These lasers are further subdivided into: 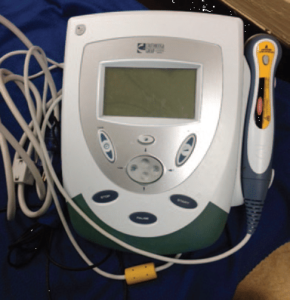 Class 4 lasers are the strongest lasers, and mostly include surgical lasers. They have the ability to permanently damage the eyes or burn the skin. 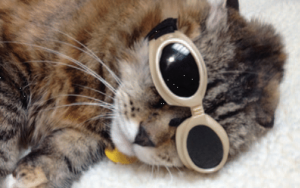 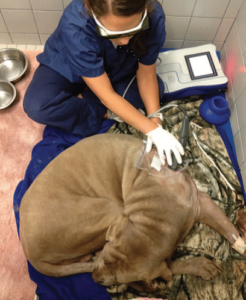 Figures 3 and 4. Eye protection should always be worn when the laser is in use; this includes any individuals in the room as well as the patients, if they will tolerate it. Courtesy Artise Stewart, DVM, CCRP, Charleston Veterinary Referral Center, Charleston, SC

WHEN SHOULD LASER THERAPY BE USED?

From a biologic perspective, photons absorbed through cellular pathways allow production of adenosine triphosphate (ATP). This process is similar to photosynthesis in plants: light is absorbed and converted into chemical energy (ATP) by reduction of CO2 to useful organic compounds, such as glucose.

ATP not only alters cellular metabolism, but also acts as a cell-signaling molecule8 and/or neurotransmitter.

Further, in-depth discussion of biochemical reactions is beyond this article’s scope.

The anti-inflammatory effects of laser therapy are considered to be due to reduced levels of PGE2 and COX-2.10 In rat osteoarthritis (OA) models, laser therapy (1) reduced edema within the joint by 23%, (2) decreased vascular permeability in the periarticular tissue by 24%, and (3) decreased pain by 59%.11

Some subjective studies in humans with OA have shown (1) improved quality of life,2 (2) reduced pain, and (3) increased analgesic and microcirculatory effects.12 However, there have been conflicting reports in human medicine that reveal no benefits of laser therapy.1

Therefore, it has been suggested that individual results may depend on:

In humans, results are conflicted, with about 50% of studies showing a positive effect and 50% showing no effect. In human ligamentous injuries, laser therapy has shown improved tensile strength and stiffness compared with controls.14

The exact mechanisms remain un-known, but it is thought that laser therapy has the potential to influence pain perception by direct and indirect actions on superficial nociceptors and modulation of inflammation. Furthermore, repeated application of laser therapy may decrease central sensitization.

Laser effects appear to be mainly inhibitory for pain receptors, and sensory nerves are more commonly affected.1 The superficial location of A delta and C nerve fibers, along with neurons that supply the vasculature for vasoconstriction and vasodilation, allows laser penetration.

Unfortunately, use of lasers for pain management is purely speculative due to lack of studies. Hopefully, more evidence will become available in the future.

HOW IS LASER THERAPY APPLIED?

To treat small areas, laser therapy is administered using a handheld probe with a beam. The probe can be placed in: 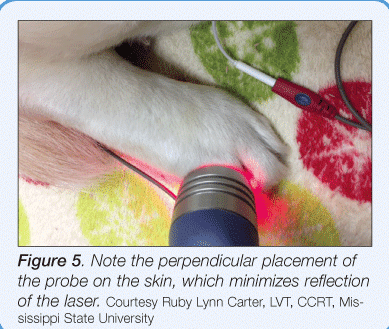 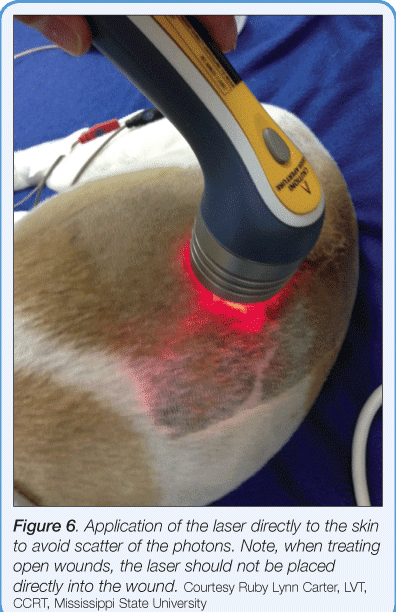 Currently, the most efficient way to determine the dose and time is to use available treatment tables1 (Table). 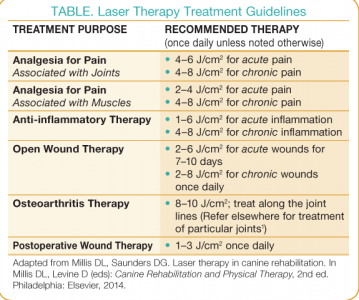 Precautions with laser therapy generally involve protecting the eyes during treatment. Since the light is coherent, a small amount focused on the retina may cause permanent damage. Fortunately, visible light will generate a blink reflex to help protect the user; however, infrared lights are not visible so a blink reflex will not occur.

In general, laser therapy is an emerging technique that appears to at least have subjective benefits. Potential areas where laser therapy can be incorporated are in wound healing, pain management, and rehabilitation for various conditions (eg, OA). As has been emphasized, evidence-based, peer-reviewed studies are lacking. The author encourages readers to pursue well-controlled studies that help document a proven benefit, along with appropriate doses and conditions that can be treated.