Diagnosing primary metastatic bronchial carcinoma in a cat can be difficult when the patient’s primary clinical sign is lameness. Lung-digit syndrome should be high on the list of diagnostic differentials.

Stephanie Apple, DVM, is currently completing a small animal rotating internship at SouthPaws Veterinary Specialists and Emergency Center in Fairfax, Virginia. She has a special interest in feline medicine. Dr. Apple received her DVM from Virginia-Maryland College of Veterinary Medicine.

Sandra Diaz, DVM, MS, DACVD, is assistant professor in the Department of Veterinary Clinical Sciences, Ohio State University. Previously, she was assistant professor of dermatology at Virginia-Maryland College of Veterinary Medicine and a veterinary dermatologist at New York City Veterinary Specialists. Dr. Diaz received her DVM from Universidad Santo Tomas, Santiago, Chile, and an MS from University of Minnesota, where she completed her residency. 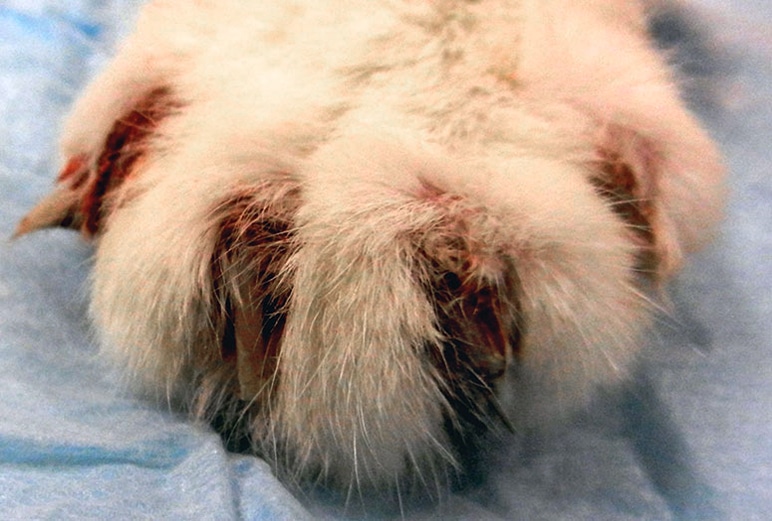 A 15-year-old castrated male domestic shorthair cat presented with a 2-month history of progressive lameness, swelling, and pain in its right front paw.

The patient was an indoor only cat. No other animals in the household were showing clinical signs. He was anorectic and had vomited a few times after eating in the recent past.

The previous attending veterinarian had taken radiographs of the affected paw and conducted a basic serum biochemical profile; however, results were not definitive. Therapy for the pain and lameness, including butorphanol, was administered, and the patient received a vitamin and mineral supplement (Lixotinic, zoetisus.com). No apparent changes in the patient’s condition were noted while receiving these treatments.

Upon closer examination, the cat’s right front paw demonstrated severe inflammation, and a bloody, purulent discharge was present between the footpads and interdigitally. All of the nail beds varied from eroded to ulcerated (Figure 1).

In addition, a small cranial abdominal mass was palpated, and a mild heart murmur was auscultated. The patient also had moderate dental disease. The remainder of the examination was normal.

Figure 1. Ulceration of the nail fold (A); all digits were affected. A bloody, purulent discharge was associated with the areas of ulceration (B).

Radiographs of the thorax and right forelimb were performed under sedation. Thoracic radiographs revealed a solitary 2.9 cm (height) mass in the left caudal lung lobe (Figure 2). Right forelimb radiographs suggested bone lysis of the P3 of digits 1 and 2. 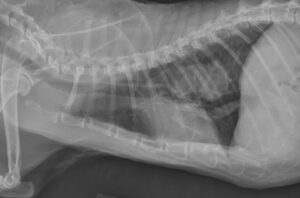 Skin samples from the ulcerated areas of the nail beds were collected by scraping the surface of the skin with a scalp blade and then were stained with Diff-Quik for cytologic evaluation. Bacterial rods and cocci were visualized. Neutrophilic inflammation and multinucleated epithelial cells were also present.

The skin samples were submitted to a clinical pathologist for analysis. Large clusters of neoplastic epithelial cells were noted, as well as many inflammatory leukocytes, rods, and cocci. The pathologist’s diagnosis was carcinoma, chronic neutrophilic inflammation, and bacterial infection. The owner declined further diagnostics for the abdominal mass.

Combined with radiographic evidence, primary pulmonary carcinoma with metastasis to the digits of the right front foot and bacterial infection were tentatively diagnosed.

Due to the presence of a mass in the lung and the lysis of the digits, the final diagnosis was primary bronchial carcinoma with metastasis to the digits, also known as lung-digit syndrome.

Cats with pulmonary neoplasia commonly have a history of increased lethargy, depression, anorexia, diarrhea, and vomiting.1 Our patient showed signs of systemic disease, including anorexia, depression, digital pain, and lameness.

However, of all cats with pulmonary neoplasia, only 25% to 50% present with respiratory signs over the course of their disease.2,3 Since this patient did not show respiratory signs, he fit well into the defined clinical picture of primary metastatic bronchial adenocarcinoma.

Although little information is available, metastasis of a pulmonary neoplasm to the digits appears to be rare. In one report of 116 cases of feline primary pulmonary neoplasia, only one case had digital involvement.4 Much like our patient, the most common presenting complaint for cats with metastasis to the digits is lameness and pain associated with one or more limbs.

The differential diagnosis for the skin lesions in this cat includes neoplasia, infectious paronychia (bacterial or fungal), and immune-mediated disease.5

Prognosis for cats with metastasis of primary pulmonary carcinoma to the digits is generally grave. Advanced age may contribute to this shorter survival time, but treatment options are limited. A recent retrospective study of 36 cats with this condition found mean survival time to be 58 days (median, 64 days), with a range of 2 to 122 days.4

In this case, we did not attempt treatment, and the owners opted for euthanasia due to short survival time associated with current available treatments and poor quality of life of the patient. Palliative care would have consisted of pain control and treatment of the secondary infections.

For those with digit metastasis, digital amputation as a treatment option has limited benefit; the median disease-free interval in cats with and without evidence of a lung mass at time of amputation was found to be 24 days, with median post amputation survival time being 104 days.6

In a more recent study, signs, such as dyspnea and pleural effusion, as well as evidence of metastasis, were shown to be associated with significantly lower survival times.2

Limited studies have evaluated the use of chemotherapy in cats with evidence of primary pulmonary neoplasia and metastatic disease. One case report documents management of a single cat that had a well differentiated pulmonary carcinoma and no evidence of metastatic lesions, using lobe resection and adjuvant therapy with mitoxantrone.8

Primary pulmonary neoplasia is most common in older cats, with 11 to 12 years the mean age of presentation;2 however, it is a rare occurrence in cats.

Previous reports have suggested that it occurs in only 2.2 per 100,000 cats, but these numbers may be rising. This increase in occurrence may be due to increased age of the feline population or increased exposure to atmospheric pollutants.5,9 Another possibility is that, with the use of more advanced technology and increased owner awareness about their cats’ health, we are able to diagnose this condition more accurately.

Primary pulmonary carcinomas have been shown to metastasize to the digits, ulna, fundus, lymph nodes, kidneys, spleen, limb muscles, and intestinal wall.11-13 The pathogenesis of pulmonary carcinoma’s predilection for digit metastasis is currently unknown, but it has been hypothesized that the digits are selectively affected due to the high digital blood flow in cats, which allows cats to maintain an appropriate core temperature. In patients with pulmonary carcinoma, this increased blood flow may predispose the digits to metastatic embolization and, thus, metastatic disease.5 Metastasis is most commonly found in weight-bearing digits.13

Cats with metastatic bronchial adenocarcinoma do not usually present for primary respiratory disease. Initial complaints are commonly lameness and pain associated with digital metastasis, or visual or neurologic deficits associated with metastasis to the fundus or brain.4,12 Dyspnea, tachypnea, and cough can signify pulmonary involvement, while auscultation of the lungs may reveal increased bronchovesicular sounds or dullness of respiratory sounds. A history of anorexia and lethargy can also be an indication of neoplasia in older cats.