This is the second article in our Imaging Essentials series–a series focused on providing critical information on radiographic positions and techniques.

This article will review the 3 components of creating repeatable, high-quality abdominal radiographs of the dog and cat. These components include:

For radiographic imaging, dogs and cats are measured at the thickest part of their bodies, typically at the liver or cranial abdomen.

Dogs measuring 15 cm or greater: For any dog measuring greater than or equal to 15 cm, a grid (8:1, 110 lines per inch) should be used to reduce scatter radiation from degrading the final image quality. Based on the type of grid used, the technique will need to be adjusted.

For any given mAs setting, the higher the mA station used, the faster the time station that can be used.

Even in the abdomen, motion can be a problem. Therefore, keeping the time station faster than 1/30 of a second is important. Adjustments in the technique will need to be made depending on the animal’s body condition. However, for a dog of healthy body weight that measures 14 cm, the previously discussed technique should be an appropriate starting point for building a technique chart.

The overall image should be evaluated for radiographic contrast (film blackness outside the patient versus shades of gray and white within the patient) and subject contrast (edge detail within the abdomen where fat will contrast with soft tissue borders for normal serosal detail). 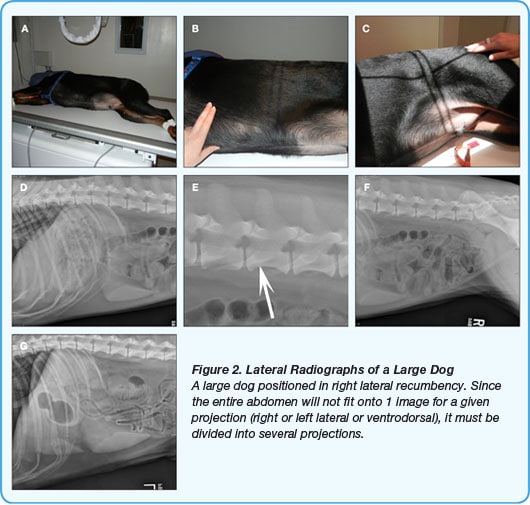 Collimation
To set the collimation for the abdominal anatomic boundaries of a lateral image (right or left):

1. Positioning: Unlike thoracic positioning, abdominal positioning has no set place for the vertical line of the collimator light (field of view) due to the various sizes of patients. Therefore, the edges of the collimation beam are your cranial, caudal, ventral, and dorsal borders.

4. Caudal border: The caudal border of the collimator light should reach the level of the greater trochanter of the femur. If the caudal beam does not reach the trochanter, then it becomes necessary to take a cranial and caudal image for each projection (right lateral, left lateral, and ventrodorsal; Figure 2). 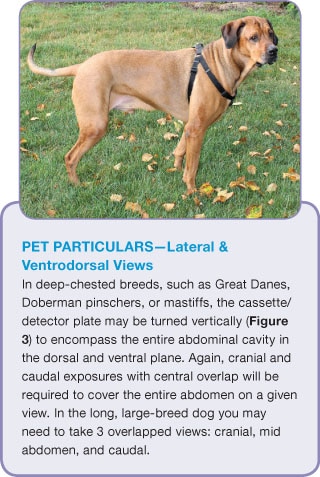 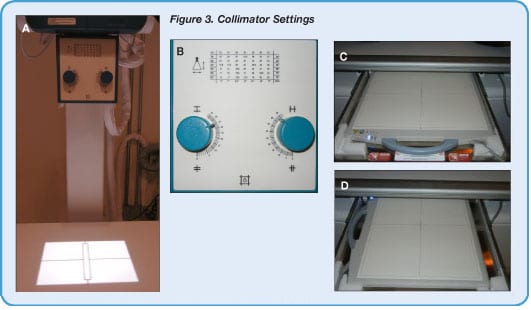 Figure 3. Collimator Settings (A) Picture of the detector and collimator knobs set to size showing the numbers; the initial abdominal field of view is set to the size of the cassette based on the collimator numbers on the light collimator housing. (B) After this the field of view (close-up of collimator) is decreased to appropriate levels based on the size of the dog. (C & D) If the dog is a large or giant breed, you may need to switch the cassette or digital plate from a horizontal position (C, long axis of the dog) to a vertical position (D, longer part of the cassette or digital plate is now perpendicular to the long axis of the dog).

Positioning
For the ventrodorsal view, the patient should be placed in dorsal recumbency (Figures 1and 4).

1. Using a V-trough helps keep the patient’s spine and sternum aligned and superimposed.

2. The pelvic limbs are pulled caudally and secured.

3. The thoracic limbs are evenly taped together and pulled forward with the patients muzzle placed between the limbs to help keep the whole vertebral column straight cranially.

The technique described in Step 3 does not work well for brachycephalic breeds, such as English bulldogs or pugs, that might have issues with upper airway disease or obstruction or chondrodystrophic breeds, such as dachshunds or basset hounds, because they are physically unable to do so. When presented with these breeds of patients, ensure that the head and neck are straight in front of the body and not obliqued to the left or right.

Collimation
To set collimation for the ventrodorsal view, the landmarks are the same as the lateral projection:

3. Horizontal line: The horizontal line along the long axis of the dog or cat’s body should be placed in an imaginary plane on the midline of the abdomen in order to bisect the abdominal cavity into equidistant left and right sides. 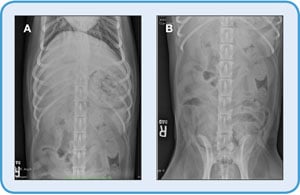 Figure 4. Ventrodorsal Radiographs of a Large Dog
Cranial (A) and caudal (B) ventrodorsal (VD) radiographs of a large dog; note the overlap of structures between the 2 images (caudal part of the VD cranial image and cranial part of the VD caudal image). Also note the straight positioning of the caudal thoracic and lumbar spine, resulting in equal amounts of the abdomen on the right and left side of each image.

The dorsoventral radiograph is one of the hardest radiographs to position consistently (Figure 5). The dorsoventral projection is typically used when performing contrast studies, such as upper and lower gastrointestinal imaging or gastrograms, and when gastric dilatation-volvulus is suspected. It also specifically evaluates the fundic portion of the stomach.

2. The thoracic limbs are pulled cranial and abducted.

3. The anatomic landmarks are the same as for a ventrodorsal image, although the dog will be shorter in the craniocaudal direction. 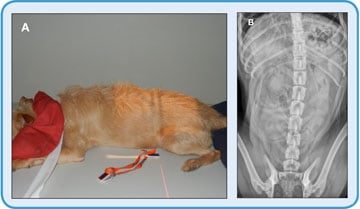 Figure 5. Dorsoventral Positioning
Dorsoventral (DV) positioning of a dog (A) for a DV image (B); the gas within the stomach is noted to be in the fundus and body of the stomach.

This view is obtained in addition to the routine radiographs for better visualization of radiopaque calculi that might be present within the urethra of a male dog or any perineal abnormalities of the dog or cat. Visualization of radiopaque urethral calculi proximal to the os penis within the membranous urethra can be hindered when the pelvic limbs are pulled caudally.

After taking the normal lateral radiograph, pull the pelvic limbs cranially so the stifle joints are touching the ventral abdomen (Figure 6). A sandbag works very well to keep the legs in position (make sure not to include the sandbag in the field of collimation). The collimation should include cranial from the iliac crest to the caudal-most skin margin at the ischiatic tuberosity or perineum.

Figure 6. Lateral View with Pelvic Limbs Pulled Cranially
(A) Placement of the dog for a cranially or flexed position of the pelvic limbs with the image centered on the perineum so as to evaluate the length of the male urethra. (B) Flexed lateral radiographic image from a male dog; this view could also be used to evaluate any perineal abnormalities in the dog or cat.

Horizontal beam lateral or dorsal projections are used for assessing free air within the abdominal cavity. These views are dependent on the ability of the radiology machine tube to be manipulated in a 90° angle. In addition, using a positioning trough makes these views easier to obtain.

For quality control of any diagnostic image, keep a simple 3-step approach in mind:

1. Determine if the technique is appropriate: all portions of the abdominal viscera should be adequately exposed with sharp contrast between the air and the patient.

2. Ascertain if the appropriate anatomy is present within the image. Make sure that there is anatomic overlap if the dog is split into cranial and caudal images.

3. Check the positioning for laterality and straightness.

The laterals, ventrodorsal, and dorsoventral projections should:

If technique exceeds quality standards and the correct anatomy is present, then check patient positioning.

Abdominal radiographs are often used as a first-line screening test for possible intra-abdominal disease. High-quality, correctly positioned radiographs are required in order to provide as accurate an assessment as possible. An abdominal series containing no less than right lateral, left lateral, and ventrodorsal view is considered the standard of care in veterinary medicine. Following a consistent, repeatable pattern for obtaining abdominal radiographs ensures that the quality of the images should be considered diagnostic.