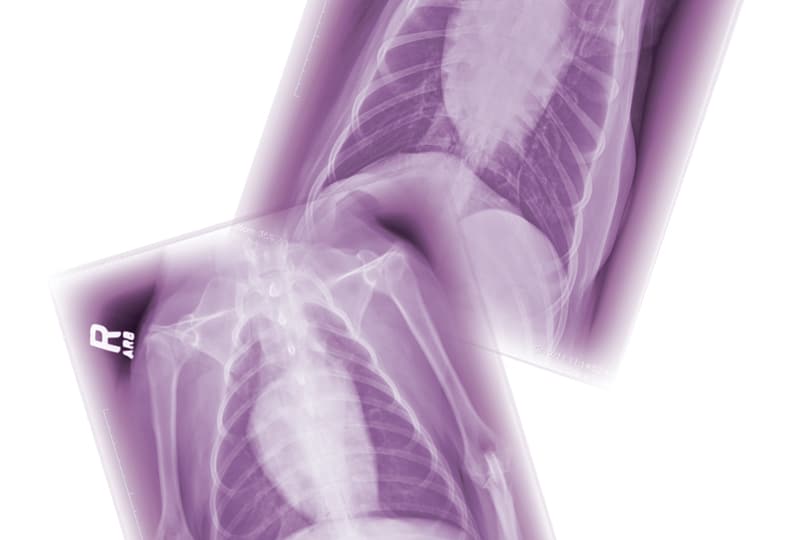 This article is the first in a series of articles that will discuss various radiographic positions and techniques. The veterinary technician plays a critical role in the development and maintenance of a radiographic program at a veterinary practice. Thus, it is the responsibility of the technician to be familiar with the basics of:

The purpose of this article is to review the 3 basic components of creating high-quality thoracic radiographs of the dog and cat, including positioning, technique, and quality control of the final images.

With advances in imaging technology (computed and digital radiography), errors in technique are less common; however, if anatomy is not appropriately collimated and positioning is inadequate, all imaging studies can be rendered nondiagnostic.

From a technical standpoint, thoracic radiographic exposure should be obtained using a high peak kilovoltage (kVp) (80-120 kVp) and low milliampere-second (mAs) (1-5 mAs) technique. This technique allows for latitude (long gray scale) images, which are important when evaluating the structures of the thorax.

Several examples would include:

For any dog measuring 15 cm or greater (measured at the liver or thickest part of the thorax), a grid (8:1, 110 lines per inch) should be used. Grids are available from most radiology manufacturers and a grid tray comes with all radiology units. For almost all radiology units, a grid is sold with the radiographic machine and table.

The rotor for the anode and the low-voltage circuit for the focusing cup/electrons of the cathode should be coupled to a foot or hand switch so that accurate timing of the exposure at peak inspiration can be made (Table). 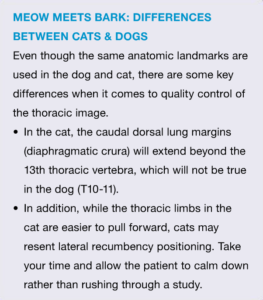 Collimation
To set the collimation for the thoracic anatomic boundaries of a lateral image (right or left):

Remember to always include the sternum of the patient so as not to exclude vital anatomy:

For the ventrodorsal view, the patient should be placed in dorsal recumbency.

The technique described in Step 2 does not work well for:

When presented with these types of patients ensure that the head and neck are straight out in front of the body and not obliqued to the left or right.

Collimation
To set collimation for the ventrodorsal view, the landmarks are the same as the lateral projection:

The dog is either in:

Horizontal beam sternal or dorsal projections are used for assessing the cranial mediastinum or fluid/air distribution within the thoracic cavity.

These views are dependent on the ability of the radiology machine tube to be manipulated in a 90-deg angle. In addition, using a positioning trough makes these views easier to obtain.

For quality control of any diagnostic image, keep a simple 4-step approach in mind:

Given that the desired technique has been attained, make sure that the appropriate anatomy is included. The laterals, ventrodorsal, dorsoventral, humanoid, and horizontal beam projections should:

If the technique exceeds quality standards and the correct anatomy is present, check patient positioning. 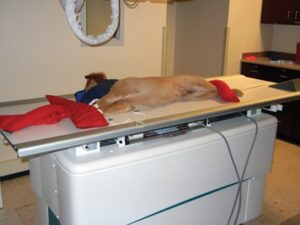 The following positioning devices can be used to help position patients and reduce staff members’ exposure to radiation:

Patient in lateral recumbency showing correct use of tape and sandbags; the dog is muzzled due to its history of biting (see Dog Bites: Protecting Your Staff & Clients)

Finally, determine if the projection was taken at the peak of inspiration:

Thoracic radiographs are often used as a first-line test for possible intrathoracic disease. High-quality, correctly positioned radiographs are required in order to provide as accurate an assessment as possible.

In addition, a 3-view thorax (right lateral, left lateral, and dorsoventral or ventrodorsal view) is considered the standard of care in veterinary medicine. Following a consistent, repeatable pattern for obtaining thoracic radiographs ensures that the quality of the images will always be diagnostic.

The 3 Principles of Radiation Safety

X-rays are a form of electromagnetic radiation that has high-energy, high-frequency, and short-wavelength rays. These rays are classified as ionizing because they can create atomic ions or charged atoms, specifically in biological tissues (ie, animal and human tissue).

Three basic principles should be adhered to when dealing with radiation and making radiographs:

These principles form the basis of a broader radiation safety concept called ALARA (As Low As Reasonably Achievable).
Patient in dorsoventral position; the veterinary staff will step behind the control wall before making the exposure.

The principle of distance means that there needs to be physical distance between the technician/veterinarian and the patient/x-ray tube at the time of exposure.

The x-ray intensity will exponentially decrease as one doubles the distance from the primary source of radiation; in this case, the area of the collimated patient that is being imaged. If you can move from 2 to 4 feet away, you will have decreased the intensity of the scatter radiation by 25%.

Shielding is required if you are staying in the room at time of exposure or within the walls of the room.