Drains are placed in wounds to evacuate fluid that would otherwise accumulate due to dead space, inflammation, infection, and/or necrosis. Fluid accumulation in a wound can be detrimental because it:

Drains do not replace debridement and lavage, and wounds that contain bacteria, foreign material, or tissues that might necrose are preferably left open and bandaged with moisture retentive dressings rather than being prematurely closed over a drain.2

Drains should be used sparingly in neoplastic sites due to the potential of tumor cell tracking along the drain. If a drain must be placed after tumor resection, it should be exited close to the wound edge at a site that could be readily resected or radiated if clean margins were not obtained.1,3

A Jackson-Pratt drain (JPD) is an active suction drain consisting of a fenestrated, flexible, silicone tube connected by a nonfenestrated tube to a compressible reservoir (called a grenade due to its shape) (Figure 1). 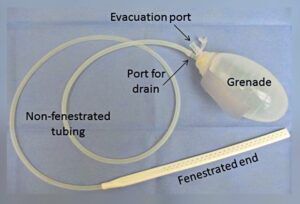 The fenestrated end of a JPD (which is placed in the wound bed) is available in a range of widths and may be flat or round. The fenestrations direct fluid into the nonfenestrated portion of the tubing and then into the grenade. The grenade has a one-way valve to prevent retrograde movement of the fluid. Common grenade sizes range from 100 mL to 400 mL. 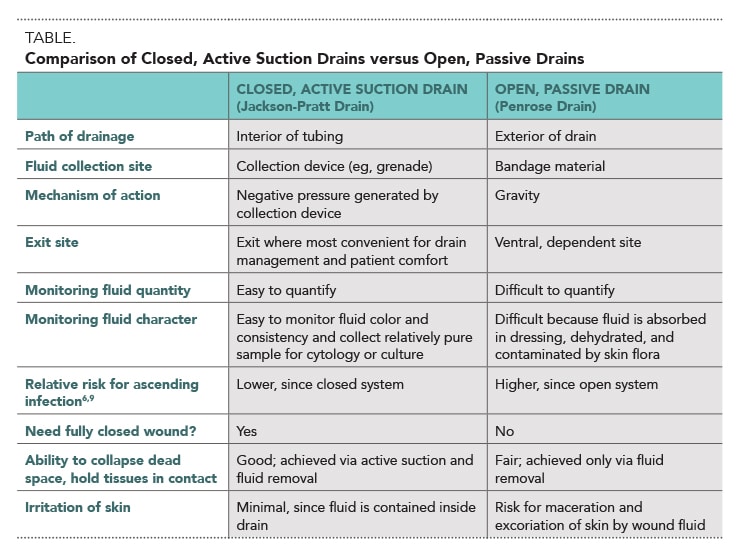 If the JPD will not hold suction, make sure:

If the incision itself is not airtight, add sutures or staples or cover it with a dressing +/- sterile ointment. The incision should become more airtight as the fibrin clot in the wound edge becomes more organized.

A JPD can become obstructed with blood clots, fibrin, pus, or tissue, although due to the large number of holes, this is unusual. If there is an obstruction:

A tube that remains obstructed may be flushed with sterile saline using sterile technique. This should only be done after carefully considering whether keeping the drain functional is more important than the potential risk for introducing contaminants into the wound when flushing. Drains that are not functioning should be removed, as their presence may increase the amount of wound fluid and risk for infection.4,5

Step by Step: Placing the Drain

As with any drain placement, aseptic technique is essential when placing and handling a JPD.8 Disposable or sterile gloves should be worn when handling the drain and grenade, and when removing the drain.

After wound debridement and lavage, choose a drain exit site in healthy skin, where it is:

For example, a good exit site for a wound over the caudolateral abdomen is a location where the JPD exits dorsally, which allows the clinician easy access to the tubing and grenade (rather than working under the dog or next to the hindlimb, if the drain exited ventrally or on the side, respectively) and allows the dog to lie in lateral or sternal recumbency without lying on the drain or getting the exit site dirty.

Do not exit the tube through the incision itself, as this may:

To place the drain, tunnel a pair of forceps from inside the wound to the planned exit site (A). Push the forceps tips against the deep surface of the skin and incise the skin immediately over the tips with a scalpel blade, making a hole no larger than the JPD tube. (Some JPDs have a trocar; push the trocar through the skin from the wound-side out, then cut the trocar off).

Place the JPD’s fenestrated end into the most dependent part of the wound where fluid will accumulate (F). The entire fenestrated area must be underneath the skin and, therefore, inside the wound when it is closed; the end can be cut shorter as needed. 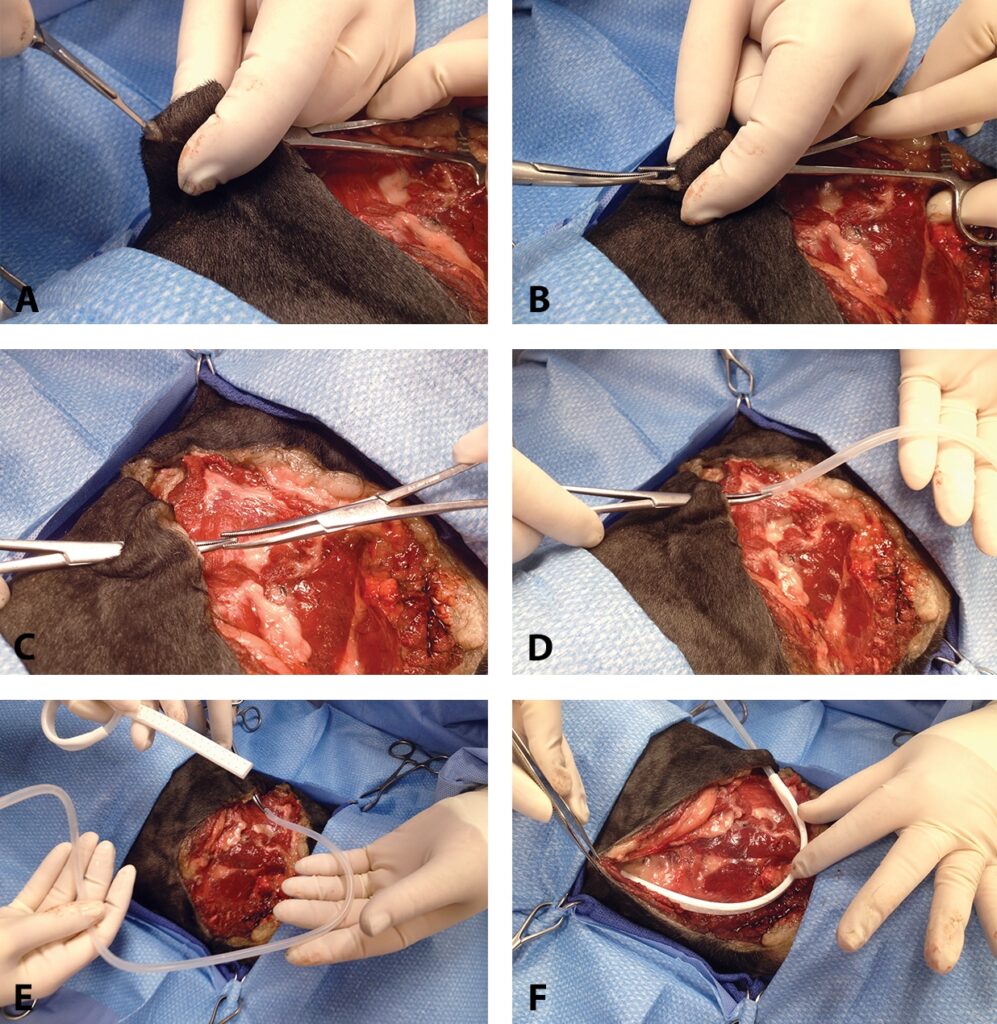 Place a purse-string suture (eg, 2-0 nylon) in the skin around the exit site to help hold the tube and create a seal. It is important to:

Close the wound in multiple layers as appropriate. Do not catch the drain in the sutures.

Trim the external tubing to a length that allows convenient manipulation of the grenade; then place a bulldog clamp on the tube, which allows it to be readily closed off if the grenade is dislodged. Securely attach the nonfenestrated end of the tube to the port with the one-way valve on the grenade (A).

To activate the grenade, compress it to push air out the evacuation port, close the evacuation port with the built-in plug or an IV catheter adapter cap (PRN), and release the compression (B). As the grenade tries to resume its original shape, negative pressure is exerted through the tubing and into the wound. Higher suction can be generated by rolling up the grenade from its apex to base on a table top to push out the air rather than squeezing it by hand.10

Residual fluid from lavage, and/or residual air after surgery, may cause the grenade to fill up right away. If this occurs, simply empty the grenade (see Step 6) and repeat the activation process until negative pressure is achieved.

Cover the JPD’s exit site with an adhesive dressing to prevent bacteria entry around the tube. Put a shirt, stockinette, or bandage on the patient to protect the external tubing and grenade from being stepped on, caught in a kennel door, or soiled. If the patient can reach the drain with its mouth, the patient should wear an Elizabethan collar when not under direct observation. 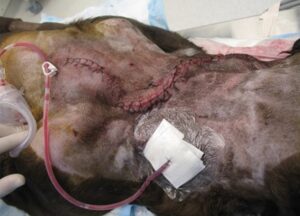 Monitor the quantity and quality of fluid in the grenade, starting with checks every 1 to 2 hours to get a sense of the production rate for the wound; then every 4 to 6 hours as appropriate. Empty and reactivate the grenade at least once a day or whenever it is half full (whichever is shorter), since the strength of suction decreases as the grenade fills.11

To empty the grenade:

Alternatively, if a PRN was placed in the secondary port, clean the PRN with alcohol and aspirate the fluid with a needle and syringe (as seen in the Figure).

Reactivate the drain as described in Step 4. Daily cytology can be performed on a sample of fluid to monitor the state of inflammation or infection. 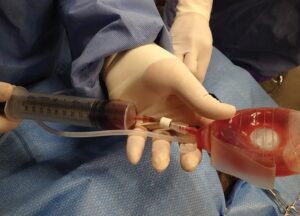 It is difficult to establish rules on when to remove a drain because fluid production varies with the wound’s etiology, dimensions, location, and degree of inflammation or infection.1,10 Because the drain itself stimulates some fluid production, the amount of drainage is not expected to reach zero.

When a wound is healing, the:

All these signs indicate that it is time to remove the drain.

The risk for seroma formation was higher in human and canine patients that were still producing relatively large amounts of wound fluid when the JPD was removed compared with patients in which the wound fluid production had steadily decreased.8,9

To remove the drain:

There are several important reasons to keep patients with a JPD in the hospital, which is my preference:

If a patient is sent home with a JPD, I advise clinicians to:

In my experience, JPDs are well tolerated by dogs, and removal can be done in a fully awake patient. Just as for vaccine administration, distracting the patient with petting and talking is typically all that is needed.