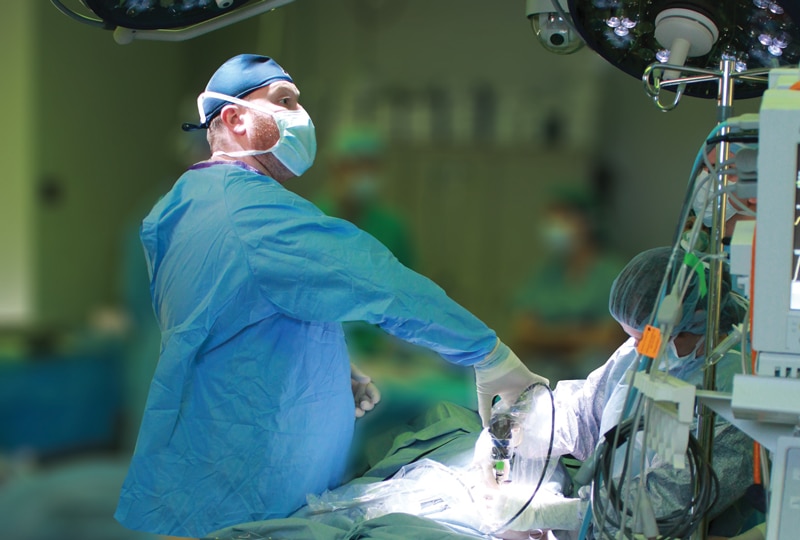 In both animals and humans, minimally invasive surgery has revolutionized modern surgical practices; it has significantly changed modern surgical thinking, surgical techniques, and patient care.1 Compared with similar open procedures,2 these new techniques are readily available for companion animals with proven advantages, such as:

As the number and variety of minimally invasive procedures increase and become proven as safe alternatives to open surgery, practitioners should ensure that they continually educate pet owners about the entire range of treatment options available for their pets.

Due to the progressive ingenuity within the laparoscopic environment, efforts in human and veterinary surgery are now directed at further minimizing morbidity. One of the emerging concepts is a platform called reduced port surgery. This platform has led to the development of new techniques, devices, and instruments that allow laparoscopic procedures to be performed through a small single skin incision 1- to 2-cm in length (often hidden within the umbilicus of human patients).

Development
This platform is an advanced minimally invasive operative approach that may be considered a bridge between conventional multiport laparoscopic surgery and natural orifice transluminal endoscopic surgery (NOTES),4 which uses natural orifices, such as the mouth, anus, and vagina, for access into the abdomen to avoid making a skin incision. NOTES may represent the ultimate goal of avoiding external incisions completely in minimally invasive major abdominal surgery.

Reduced port surgery was pioneered in Philadelphia by Paul G. Curcillo, MD, and Stephanie King, MD, in 2007; at that time their group deemed the technique single port access (SPA).5 The SPA technique enabled the reduced port surgical platform to enter mainstream human laparoscopy and gain widespread acceptance as a safe and viable platform for laparoscopic surgery. Seeing an opportunity to extend the breadth of this new platform, a collaborative effort between human surgeons (Curcillo and King) and a veterinary surgeon (Runge) in 2010 enabled the SPA technique to be adapted for clinical veterinary laparoscopy (Figure 1).6 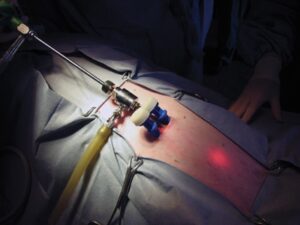 Since the first description of SPA cholecystectomy,7 a wide array of commercially available multitrocar ports have become available. This has led to two platforms available for reduced port surgery. These platforms come with their own acronyms as well; hence, the commercial entities who have developed these ports have adopted their own trademark nomenclature for the laparoscopic techniques used through their multitrocar ports.

Currently, the two platforms are the:

The SPA technique maintains use of standard instruments and multiple trocars inserted through a single skin incision (ie, port of entry) with multiple fascial incisions within the abdominal wall. The single port device platforms utilize novel multitrocared ports that can be placed through a larger fascial incision.

Descriptions for the use of commercially available multitrocar ports are present throughout the human laparoscopic literature and include but are not limited to:

In 2007, SPA introduced a novel approach to abdominal entry for human laparoscopic procedures. A single, often concealed, skin incision through the umbillicus5 (generally < 18 mm in length) was used and a wide variety of human surgical procedures have been successfully performed, including cholecystectomy7 and oophorectomy.9

In 2010, our group at University of Pennsylvania School of Veterinary Medicine reported on the successful use of the SPA technique in canine patients.6 SPA maintains standard instrumentation and techniques and cost control, while preserving safe dissection techniques defined by multiport laparoscopy.10,11 With the SPA technique, the large triangle of trocar positioning seen in multiport laparoscopy is simply moved—the trocars are arranged in a smaller triangle completely within a single incision.

Switching to the SPA Surgical Technique

The SPA surgical technique introduces an innovative approach to abdominal entry and trocar placement through a single skin incision. This technique is based on standard exposure and dissection of multiport laparoscopy. It requires the surgeon to learn only one new method of access and then become comfortable performing the familiar dissection and surgical techniques with a new arrangement of standard, familiar instruments in close proximity.5,7,10

The efficacy and learning curve of this access system in veterinary surgery is currently being evaluated clinically for select procedures in canine and feline patients at University of Pennsylvania School of Veterinary Medicine (Figure 5). 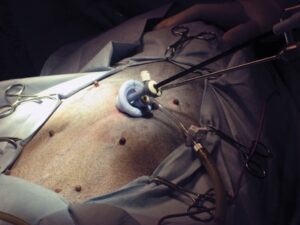 The SILS multitrocar device is an FDA-approved access system used for reduced port laparoscopic surgery in humans. This port allows the clinician to simultaneously pass multiple instruments through a single access point (Figure 2).

The SILS multitrocar port is packaged and supplied as a sterile single-use device. It is a blue flexible port made from hourglass-shaped elastic polymer that conforms and fits snugly within the abdominal incision.

When using the SILS port with standard laparoscopic instruments, the parallel and close proximity of the left and right hands may result in crowding, ultimately preventing adequate triangulation. This problem is offset by using novel instruments that have the capability to articulate (Figure 6). 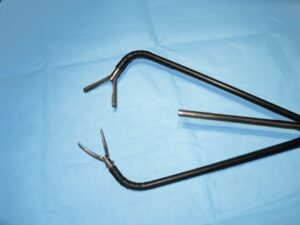 Clinical Evaluation
In veterinary medicine, the efficacy and limitations of the SILS multitrocar port with use of articulating and straight instruments is currently under evaluation.

The Triport+ multitrocar device is an FDA-approved multitrocar access port used for reduced port surgery in humans (Figure 3). It allows the clinician to pass multiple instruments simultaneously through the port’s single incision (Figure 7).

This port is packaged and supplied as a sterile single-use device.

The system can be used in combination with a deflectable tip EndoEYETM optical camera (olympusamerica.com) for visualization (Figures 7 and 8). This optical system allows the camera operator to visualize organs from different angles, bending and flexing the scope tip as needed to create the necessary view of the surgical procedure. 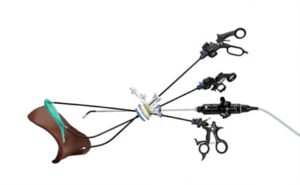 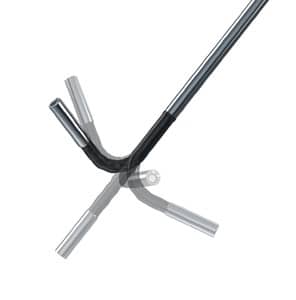 The outer portion of the port can be removed without having to disengage the inner sheath from its snug fit against the abdominal wall. This allows for specimen retrieval without port removal.

The clinical benefits and limitations of the TriPort+ access device are being assessed in both human and veterinary surgery. Efficacy in veterinary patients is currently being clinically evaluated in select canine and feline cases at University of Pennsylvania School of Veterinary Medicine. As of yet, no data exist within the veterinary literature comparing Triport+ to standard multiport laparoscopy. 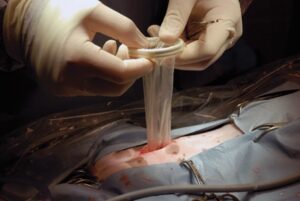 Figure 9. An extra small Alexis wound retractor being placed on a canine patient’s midline. The outer ring is rolled down to sit flush with the abdomen, allowing 360o radial wound retraction.

The clinical benefits and limitations of the GelPOINT access system are currently being evaluated in veterinary surgery. Select canine patients are currently participating in trials at University of Pennsylvania School of Veterinary Medicine. To date, no data in the veterinary literature compares this system to standard multiport laparoscopy.

Current efforts in human laparoscopy are focused on reducing overall surgical morbidity and veterinary laparoscopy has continued to follow suit. However, reduced port surgery in veterinary medicine is in its infancy. Further refinements in instrumentation and operative techniques are required before this method of surgical access can be widely accepted.

Ongoing advancements in human laparoscopy have inspired our group to improve existing minimally invasive surgical techniques and evaluate the reduced port platform’s use in veterinary laparoscopy (Tables 1 and 2). Our initial experience is promising. The combination of successful use of SPA techniques in canine patients and multitrocar devices in cats and dogs for specific laparoscopic procedures have provided evidence that, with appropriate patient selection, the reduced port platforms have a role in companion animal veterinary medicine. 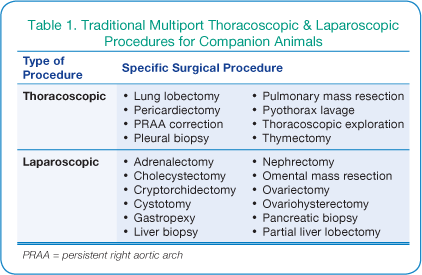 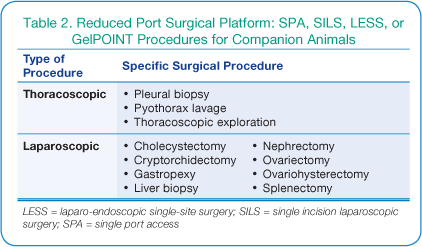