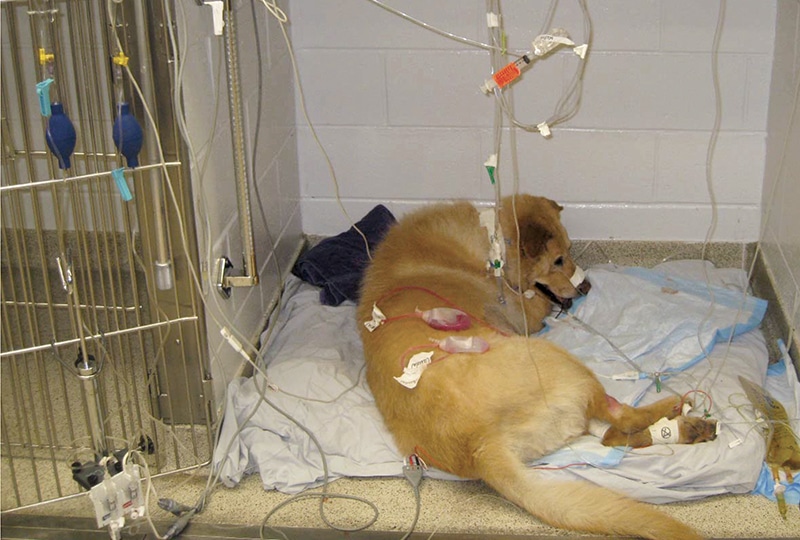 Early recognition of patients with systemic inflammatory response syndrome (SIRS) and sepsis is imperative in order to optimize the chance of patient survival. Early intervention is then necessary to minimize further tissue ischemia, cellular damage, and organ injury.

While early aggressive fluid therapy is essential to help increase cardiac output, tailoring fluid requirements to individual patient needs is important to avoid the detrimental effects of fluid overload. Patients with SIRS/sepsis may be resuscitated and supported with one or more of the following fluids:

Isotonic crystalloids are the cornerstone for resuscitation and treatment of patients with SIRS/sepsis.

In patients with severe cardiovascular shock (noncardiogenic), the safest way to administer these fluids, and tailor fluid resuscitation to the patient, is to:

In normal animals, approximately 30% of the volume administered remains in the vasculature 30 minutes after isotonic crystalloid administration, with the remainder lost into the interstitium and via the kidneys. However, patients with SIRS/sepsis often have vascular leak syndrome, which can lead to even more fluid loss from the intravascular space. Therefore, judicious fluid therapy is especially important in these patients.1

The practice of delivering a “shock dose” of fluids—90 mL/kg (dogs) and 50 mL/kg (cats)—as a single bolus is no longer recommended due to predisposition to volume overload.

Administration of hypertonic (7%–7.5%) sodium chloride, also known as hypertonic saline (HTS), causes a transient osmotic shift of water from the extravascular to the intravascular compartment in interstitially hydrated animals.

Evidence suggests that HTS may also aid in:3–5

A 3 to 5 mL/kg IV bolus of HTS may be administered at a rate not to exceed 1 mL/kg per minute, which avoids dangerous adverse effects, such as vagally mediated hypotension, bradycardia, and bronchoconstriction.6,7 The volume-expanding effects of HTS are greatest 30 minutes after infusion; then gradually decline over the following 2 to 4 hours.1

Because osmotic diuresis results after HTS administration, additional therapy with isotonic crystalloids or colloids is indicated to prevent interstitial dehydration and maintain volume expansion. However, HTS therapy should not be repeated due to risk for hypernatremia.

Synthetic colloids may be useful in patients with SIRS/sepsis, especially if they are hypoproteinemic.

Even though evidence is lacking in veterinary patients, there is serious concern in human medicine that colloid solutions may be associated with an increased need for renal replacement therapy. As a result, use of synthetic colloids in humans has been dramatically reduced in recent years.9

The need for blood products in patients with SIRS/sepsis depends on the disease process and individual characteristics of the patient.

Other important parameters that help determine a patient’s transfusion needs are increasing lactate level, changes in respiratory rate, and increasing heart rate; all of these are possible indicators of poor oxygen delivery to the tissues.

Suggested doses for transfusion therapy are:

Therapy should be guided by the individual patient’s response and improvement of tissue perfusion parameters.

Management Goals for Patients with SIRS/Sepsis

Albumin is critical for the transport of drugs, chemicals, toxins, bilirubin and enzymes, and for wound healing.

Animals with SIRS/sepsis and severe hypoalbuminemia (ie, albumin level < 2 g/dL) may benefit from concentrated albumin (human or canine) therapy. Studies in dogs showed that administration of human albumin increased circulating albumin concentrations, total solids, and colloid osmotic pressure.10 However, sensitization, acute and delayed reactions, and potentially lethal complications from administration of human albumin to dogs have been reported.10–14 Therefore, this treatment should be reserved for patients that are:

When administering 25% human albumin (250 mg/mL), use the following approach:

Canine albumin—which is sold as a lyophilized product that has had intermittent availability in recent years—may offer a safer alternative, but further research will prove useful.

Patients with SIRS/sepsis can develop hypotension—as a result of excessive vasodilation—despite adequate intravascular volume replacement. This vascular relaxation may necessitate use of adjunct vasoactive agents.

When to Use a Vasopressor Drug

This decision is generally made when:

Most vasopressor drugs are given as a CRI. Initially, the lowest recommended dose is typically used, with upward titration every 15 to 30 minutes based on the patient’s cardiovascular response. Table 1 provides dosages of commonly administered vasopressors.

The general aim of treatment—an attempt to support vital organ perfusion—is a mean arterial pressure of 65 to 70 mm Hg or Doppler blood pressure of > 100 mm Hg. 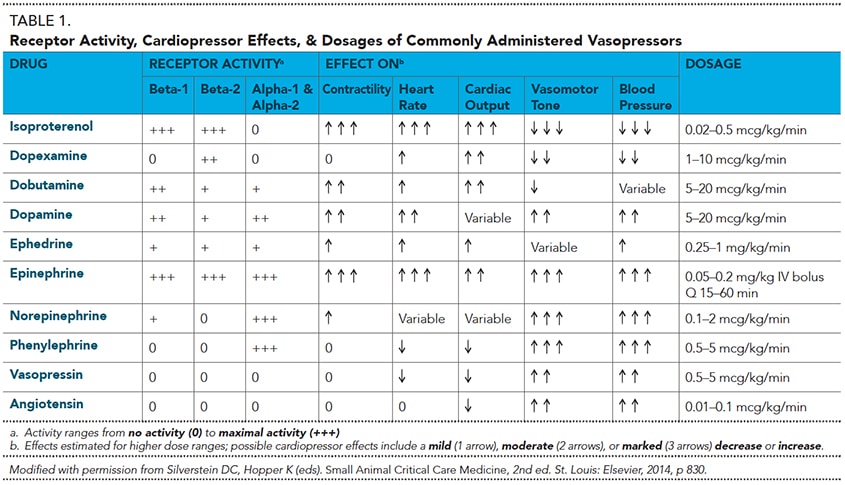 Dopamine has dopaminergic, beta-adrenergic, and alpha-adrenergic effects at varying doses. In a given patient, the actual dose response is unpredictable, but the range typically varies between 5 to 12 mcg/kg/min in hypotensive patients.15

Norepinephrine has preferentially alpha-adrenergic effects, acting as a pressor in animals with normal or increased cardiac output states. Recent human studies have shown that, in septic patients, more renal protective effects and successful outcomes are seen when norepinephrine is used as the first-line pressor of choice rather than dopamine.16 This is most likely because norepinephrine is associated with fewer tachyarrhythmias and a more predictable dose-response curve. In addition, in some patients, dopamine can adversely affect renal blood flow at relatively low doses.17–19

Epinephrine is a potent pressor with mixed alpha- and beta-agonist activity. Compared to other vasopressor drugs, it may have increased proarrhythmogenic effects and a greater tendency to impair splanchnic blood flow.20 Epinephrine is rarely used as a first-line vasopressor agent due to its high rate of adverse effects, but it may be indicated in critically ill animals.

Phenylephrine acts as a pure alpha-agonist drug, resulting in profound vasoconstriction. It is typically used in patients unresponsive to other sympathomimetics, but may be considered a sole first-line agent in vasodilated, hypotensive animals. Due to its lack of beta-agonist activity, it is the least arrhythmogenic of the sympathomimetic pressors and may be desirable in patients already displaying tachyarrhythmias. However, adequate cardiac contractility should be confirmed before administering phenylephrine as a sole vasoactive agent because of risks for increased afterload due to this drug’s strong alpha effects.

Dobutamine is a pure beta-agonist that results in increased cardiac output and oxygen delivery and mild peripheral vasodilation. It is useful in patients with decreased systolic function, but may worsen tachyarrhythmias and increase cardiac oxygen consumption.

Vasopressin is a nonadrenergic vasoconstrictor agent with both direct and indirect effects on the vascular smooth muscle via V1 receptors. During the early stages of shock, endogenous vasopressin is released to help stabilize arterial pressure and organ perfusion, but this results in depleted hypothalamic stores during prolonged states of shock. Use of low-dose vasopressin in the later stages of catecholamine-refractory vasodilatory shock may be beneficial. Vasopressin is also more effective in severely acidemic patients because, in states of low pH, the catecholamine response is blunted.

In septic dogs, early empiric antimicrobial therapy has proven beneficial. When an early antibiotic protocol was used to treat intra-abdominal sepsis, survival increased from 60% to 70%.22

Once samples have been obtained for culture, or if high suspicion for a septic process exists but samples cannot be obtained immediately, initiate broad-spectrum antimicrobial therapy as soon as possible (Table 2). 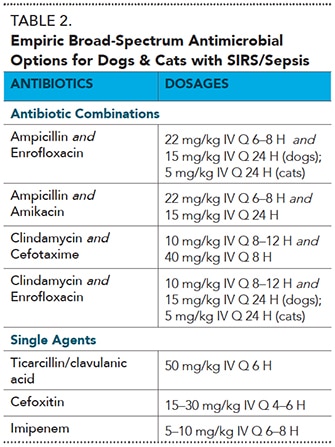 Gastrointestinal (GI) bleeding and dysfunction secondary to SIRS/sepsis is common:

Strategies to minimize and treat GI upset include use of antiemetics, antacids, promotility agents, and early enteral nutrition (Table 3). 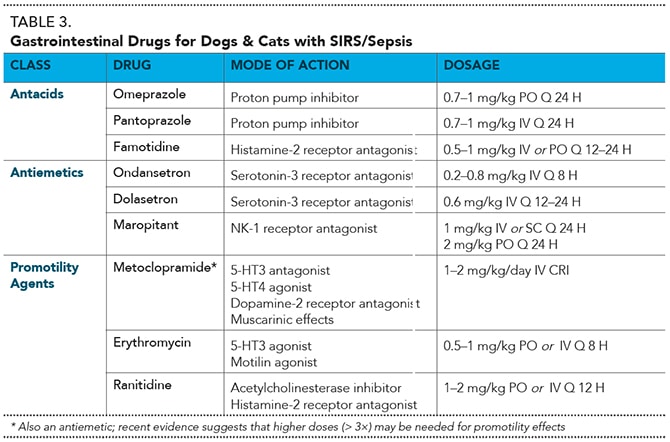 Once a patient has been stabilized, nutritional needs should be addressed. If tolerated by the patient, enteral feeding is preferred to maintain GI villi health, decrease bacterial translocation, and encourage gastric motility.

Pursue parenteral nutrition if enteral feeding results in vomiting, nausea, or abdominal pain, and does not appear to be well tolerated.

Patients should be monitored every 12 to 24 hours for:

Electrolytes should be supplemented as indicated, and hyperglycemia should be avoided because, in humans, it has been associated with a higher risk for infection and morbidity.23 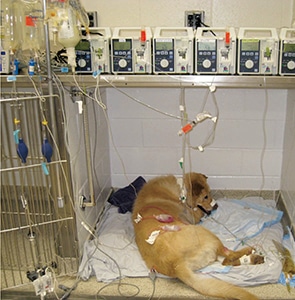 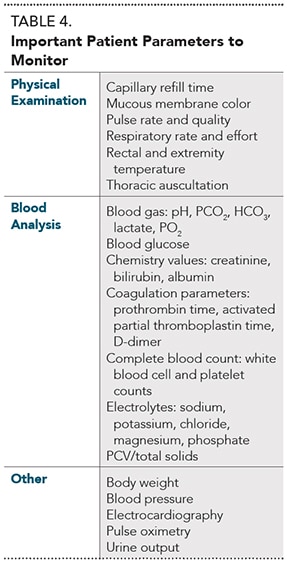 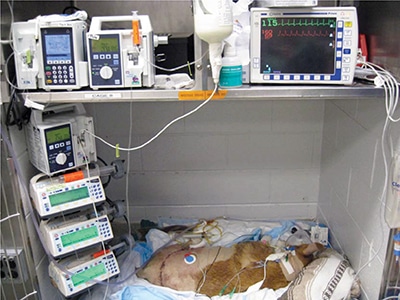 Prognosis for patients with SIRS/sepsis depends on the type of underlying disease, ability to correct the underlying disease process, and patient’s response to aggressive treatment and supportive care.
Due to the typical prolonged length of hospitalization, intensive monitoring, and necessity for 24-hour care, these patients require a substantial financial commitment from their owners, and regardless of cause, SIRS/sepsis has a high mortality rate in both humans and animals. The most common causes of a declining condition, even with aggressive treatment, include cardiovascular collapse, persistent coagulation abnormalities, multiorgan dysfunction syndrome, and acute lung injury.

A patient’s chance of survival depends on:

Deborah Silverstein, DVM, Diplomate ACVECC, is an associate professor of critical care at University of Pennsylvania Ryan Veterinary Hospital. She is the co-editor of the Small Animal Critical Care Textbook, speaks both nationally and internationally on topics relating to critical care medicine in small animals, and has published numerous articles. For questions or comments, she can be reached by email at [email protected]