The Voice for Companion Animals: An Interview With Steve Dale 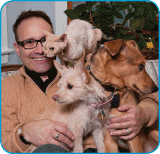 Steve Dale, a certified dog and cat behavior consultant, is the author of the syndicated newspaper column My Pet World (Tribune Media Services); host of nationally syndicated radio programs Steve Dale’s Pet World and The Pet Minute with Steve Dale; the pet expert at WGN Radio, Chicago; and a contributing editor for USA Weekend. A familiar face to those in the veterinary world, it was a pleasure to learn more about his enthusiastic commitment to pet welfare. Dr. Jack O. Walther, DVM, and former president of AVMA said it best: “The animals of America have no better friend!”

What motivated you to become a journalist specializing in pets and their people?

I always wanted to pursue a television, radio, or newspaper career. My first media job—as a radio DJ in Chicago—left my afternoons free, which led to writing for a suburban Chicago newspaper, covering everything from board meetings to fires to sports. Eventually I began working the celebrity beat for the Chicago Tribune. I found that many celebrity interviews contained more discussion about their cats or dogs than the movies they were promoting.

I have always loved animals and found myself writing more and more features about them, particularly companion animals. This led to invitations to write for other publications, such as Dog Fancy and Dog World. I wrote about pets and owners, benefits and events, shelters and organizations, dog breeds, toughest pets to own, and many other topics close to the hearts of pet caregivers.

Why did you become an animal behavior consultant?

Animal behavior is the area that resonates the most with readers and listeners—about 70% of the questions I receive are related to behavior. My belief is that behavior problems are the number one cause of companion animal deaths; so many are euthanized due to undesirable behaviors.

I’ve had two pets that have greatly influenced my views on animal behavior, not to mention changed my life: Chaser, a female Brittany afraid of everything from people to fire hydrants, became a social and playful dog; Ricky, a Devon rex cat, matured into a skillful piano player. Both were pets that thrived in an environment that catered to their individual needs and abilities.

My pet journalism interactions and personal experiences led to certification by the International Association of Animal Behavior Consultants (iaabc.org). I often refer pet owners to American College of Veterinary Behaviorists (dacvb.org) board-certified specialists. There is a great need for board-certified veterinary behaviorists—there are only approximately 54 in the U.S., with some working in academia or industry instead of directly with pets and owners.

Tell us about the work you do to promote animal welfare.

I am involved with a number of organizations and passionate about all of them. I have served on the American Humane Association (americanhumane.org) board for six years. I love this organization for two reasons: (1) it focuses on animal welfare rather than promoting an agenda and (2) it is a science-based organization, which appeals to me.

I helped found the CATalyst Council (catalystcouncil.org) in order to elevate the status of cats: Cats are the Rodney Dangerfield of pets—they get no respect! Compared to dogs, cats are more often relinquished to shelters, less likely to receive veterinary care or be microchipped, and perhaps more likely to be abused.

I am also on the board of the Tree House Humane Society (treehouseanimals.org), a cageless cat shelter in Chicago and one of the first no-kill cat shelters in the country..

Is there an organization or program that has special meaning to you?

When my cat Ricky passed away from feline hypertrophic cardiomyopathy (HCM), I was devastated; however, the circumstances led me to the WINN Feline Foundation, where I serve as a board member. The Foundation raisies funding to support research for many feline diseases, such as HCM, feline leukemia, and diabetes. The Ricky Fund (winnfelinehealth.org/RickyFund.html) helped develop a genetic test to identify the gene responsible for HCM. More research is needed on HCM, but this is a great step forward.

What would you like to say to our readers?

Clients need to see you! Veterinarians and their teams need to better communicate the importance of preventive care visits (twice yearly, not once) to pet owners—these visits save lives! I can’t stress the importance of this message enough. And to all veterinary technicians, in recognition of National Veterinary Technician Week, I’d like to say “Thank you!” for all that you do.

Learn more about Steve, his work, and commitment to pets at:

The American Heartworm Society Looks Toward the Future – An Interview with Dr. Christopher Rehm