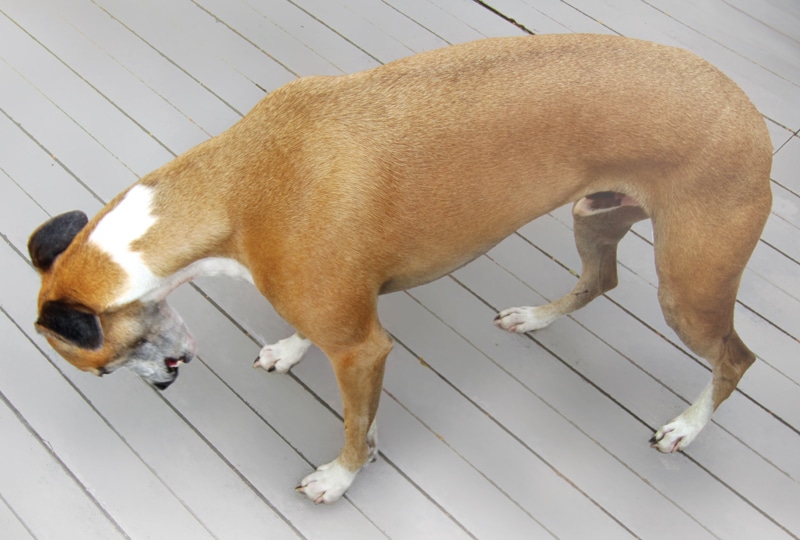 Once a neurologic examination has been completed in a patient, the practitioner can use the abnormalities, or lack thereof, to help localize the lesion to the brain, spinal cord, peripheral nervous system, or cauda equine, which provides critical information on the patient’s condition.

The neurologic examination evaluates different parts of the nervous system; the findings from the examination help localize the lesion to the:

A fundic examination is recommended, especially in patients with brain disorders. Repeat neurologic examinations are helpful to discover subtle abnormalities and assess progression of disease.

Read The Neurologic Examination in Companion Animals—Part 1: Performing the Examination (January/February 2013) at todaysveterinarypractice.com.

Lesions in the brain can be localized to the:

In order to localize the lesion to a specific part of the brain, an understanding of the anatomy and function of the brain is necessary (see Brain Anatomy & Related Functions).

The brainstem connects the cerebrum with the spinal cord and body. All information to and from the body (which is examined by postural reaction assessment) passes through the brainstem and thalamus to leave or reach the cerebrum.

The brainstem includes the midbrain (mesencephalon), pons, and medulla oblongata. Localizing to one specific part of the brainstem is often not possible; however, cranial nerve deficits may help pinpoint the lesion.

The brainstem contains the cranial nerve cell bodies (except CN I and II).

The cerebellum adjusts and moderates all movements initiated by the cerebrum and executed by the thalamus. Clinical signs that may indicate a cerebellar lesion include: 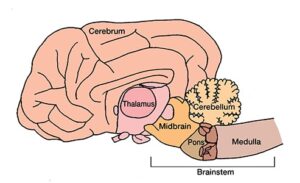 Cross-section of cerebrum and thalamus and lateral aspect of brainstem

A patient with ataxia may have a lesion in the proprioceptive pathways (peripheral nerves, spinal cord, or cerebrum), vestibular system, or cerebellum. Ataxia can be described as an uncoordinated gait, with crossing of the limbs and, sometimes, listing or falling to 1 or both sides. Ataxia can be further characterized as:

This rare posture is seen with a severe lesion in the cerebellum. Findings include:

This rare posture is seen with a severe lesion in the midbrain or pons.

Horner’s syndrome is caused by a lack of sympathetic innervation to the eye. In patients with other neurologic dysfunction, it is most commonly seen with peripheral vestibular dysfunction, C6 to T2 myelopathy, or brachial plexus injury (ie, outside the spinal canal). Clinical signs include:

Hemineglect is a reduced reaction to a stimulus (body or head) contralateral to a lesion in the cerebrum. To test for hemineglect observe the patient’s reaction (turning the head around, whining, trying to bite) while pinching the side of the trunk with hemostats. Compare reactions when pinching the other side.

A change in mental status is caused by a lesion in the prosencephalon or brainstem (the reticular activating system is diffusely spread in the brainstem and responsible for our awareness and arousability).

A patient with a cerebral lesion usually has mild, almost unnoticeable paresis. Patients with brainstem lesions have more pronounced paresis and ataxia ipsilateral to the lesion.

If there is a history of seizures, the lesion can be localized to the prosencephalon, even if the neurologic examination is normal.

In addition to postural reaction assessment, these areas are also evaluated by testing the spinal reflexes (Figure 1). 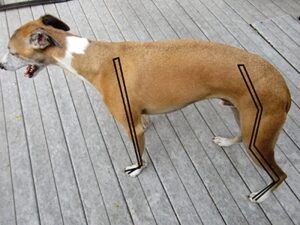 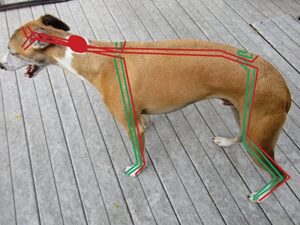 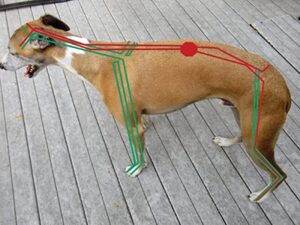 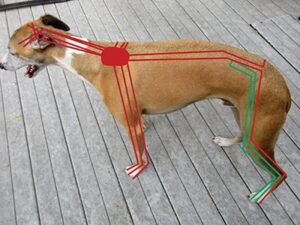 Figure 4. C6 to T2 myelopathy: Postural reactions are delayed or absent in all limbs; spinal reflexes are reduced or absent in thoracic limbs (red lines) and normal or increased in pelvic limbs (green lines) 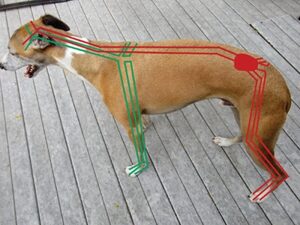 Tetraparesis without cranial nerve deficits or other brainstem signs suggests a cervical myelopathy; paraparesis is suggestive of a thoracolumbar myelopathy.

This posture is seen with severe spinal cord injury between the T3 and L4 spinal cord segments. There is increased tone in the thoracic limbs, and normal or reduced tone with paralysis of the pelvic limbs; the prognosis is guarded but not hopeless.

All postural reaction tests assess the sensory pathway from the paw to the brain stem and contralateral cerebrum (through the limb and spinal cord) and the motor pathway that returns the same way to the paw (Figures A and B).

Conscious recognition is required from the cerebrum in order for the patient to replace the paw correctly; a slow or absent response indicates a problem somewhere along the pathway. The pathways to and from the cerebellum contribute to the response and, in patients with cerebellar lesions, cause altered postural reactions.

Other findings help pinpoint the lesion to a specific area.

Figure C. With a left-sided brainstem lesion or right-sided cerebral lesion, postural reactions are affected in the left thoracic and pelvic limbs (red lines) but normal on the right side (green lines)

The peripheral nervous system includes the:

Peripheral nervous system diseases can be difficult to diagnose, with signs of neurologic dysfunction being vague or nonexistent. The following information does not pertain to diseases of the autonomic nervous system.

The cauda equina are the spinal nerves (L6–L7, S1–S3, and Cd1–Cd5) caudal to the spinal cord in the lumbar vertebral canal.

Helena Rylander, DVM, Diplomate ACVIM (Neurology), is a clinical assistant professor in the Department of Medical Sciences at University of Wisconsin–Madison’s School of Veterinary Medicine. Her clinical interests include spinal surgery, electrophysiology, and diagnostic imaging. Dr. Rylander has published several articles and a book chapter as well as presented at national and international meetings. She received her veterinary degree from University of Agricultural Sciences in Uppsala, Sweden. After 10 years in private practice in Sweden, Dr. Rylander completed a residency in neurology/neurosurgery at University of California–Davis. She also completed the Educational Commission for Foreign Veterinary Graduates (ECFVG) certification program and received her DVM.