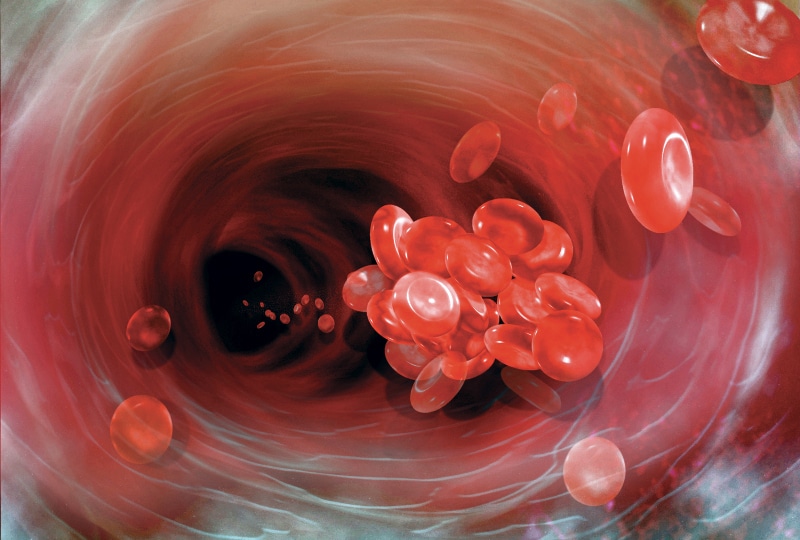 Calculation of the anion gap (AG) is helpful for differentiating causes of metabolic acidosis. The AG is the difference in the sum of commonly measured:

The AG is an artificial, calculated measure because the patient always has equimolar amounts of anions and cations to maintain electroneutrality. The unmeasured anions (UA) and cations (UC) maintain the balance of positive and negative charges:

Therefore, the anion gap is the difference between the number of unmeasured anions and unmeasured cations:

Decreased tissue oxygen delivery (causing lactic acidosis due to anaerobic metabolism) can occur as a result of:

When treating with sodium bicarbonate, calculate the amount to administer by using the following equation: Base excess (BE) x body weight (kg) x 0.3 = Bicarbonate deficit (mEq) Depending on the needs of the patient, usually ¼ to 1/3 of the calculated dose is given at a time: Careful monitoring of pH, HCO3-, BE, carbon dioxide (CO2), and Na+ should occur when sodium bicarbonate is administered. Side effects of sodium bicarbonate therapy should be considered, and include:

Consequences of metabolic alkalosis include: In humans, these signs are described as malaise, lethargy, and weakness, and can progress to confusion, stupor, muscle twitching, tetany, seizures, and coma.

Respiratory acidosis is associated with: Acute hypercarbia can have cardiovascular, metabolic, and neurologic sequelae.

Therapeutic Measures Respiratory acidosis can rapidly become life-threatening and requires immediate recognition and treatment. Treatment is aimed at correcting the: If anesthetic or sedative agents have been administered and are causing hypercarbia due to depression of brain respiratory centers: If the cause of hypoventilation cannot be rapidly corrected, the following are indicated: 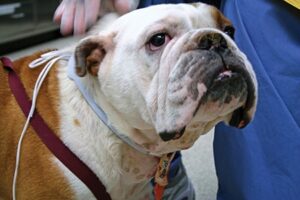 Figure. Tracheostomy tubes can be used to treat hypoventilation and respiratory acidosis in dogs with upper airway obstruction.

Clinical Signs & Consequences Differential Diagnoses Therapeutic Measures Treatment is aimed at correcting the underlying process that is driving the hyperventilation.

Interpretation of venous and arterial blood gases can be essential to treatment of many patients. Blood gas analysis has important implications with regard to:

Diagnostic Results & Interpretation A 2-year-old, castrated male domestic shorthair cat is presented with a few-day history of lethargy, anorexia, and occasional vomiting. Table 1 provides pertinent laboratory results; Table 2 provides interpretation of results. Differential Diagnosis Differentials for this severe, normochloremic (when the slightly low Cl- is corrected for the low Na+, it is in the normal range), high AG metabolic acidosis should include: Ketosis is unlikely given the normal glucose, and lactate is normal. However, BUN and creatinine (248 and 20.6 mg/dL, respectively) indicate that the cat is severely azotemic. Diagnosis & Treatment 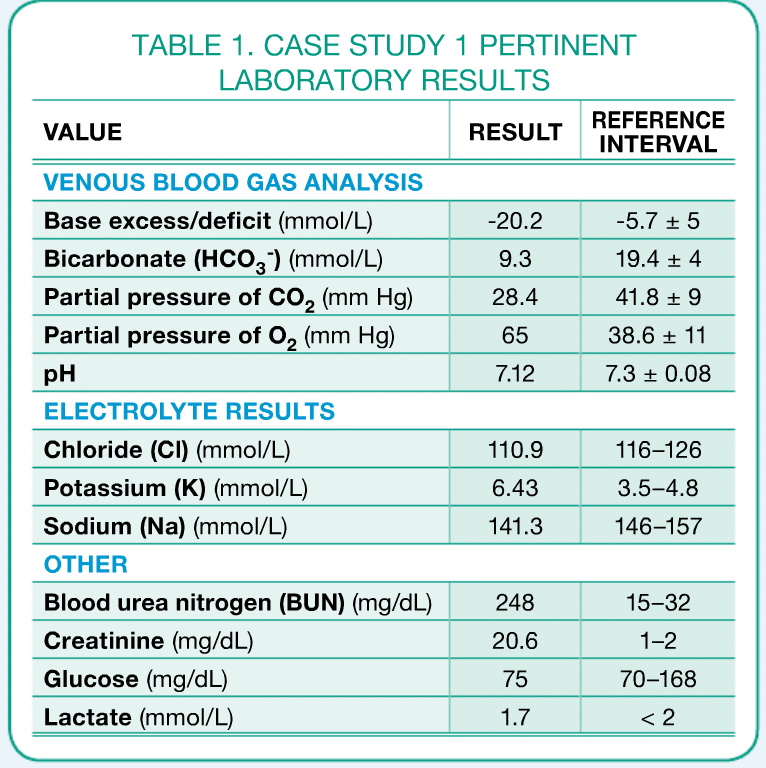 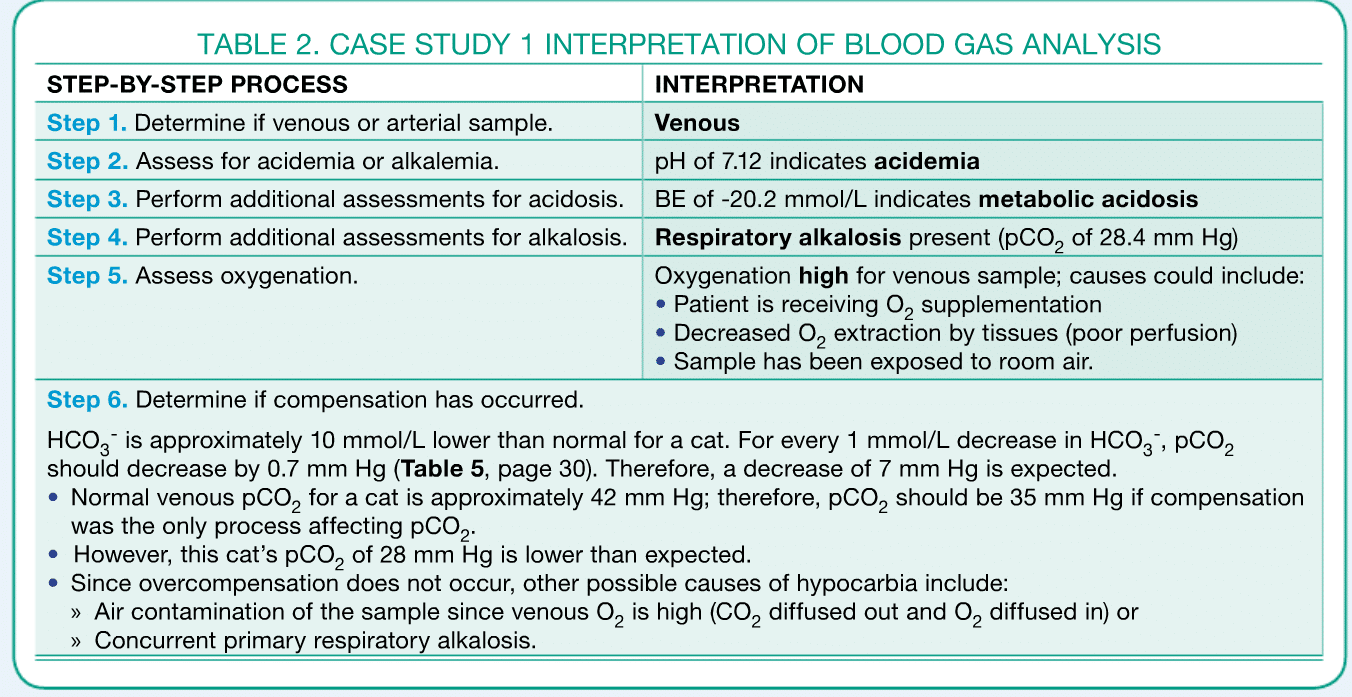 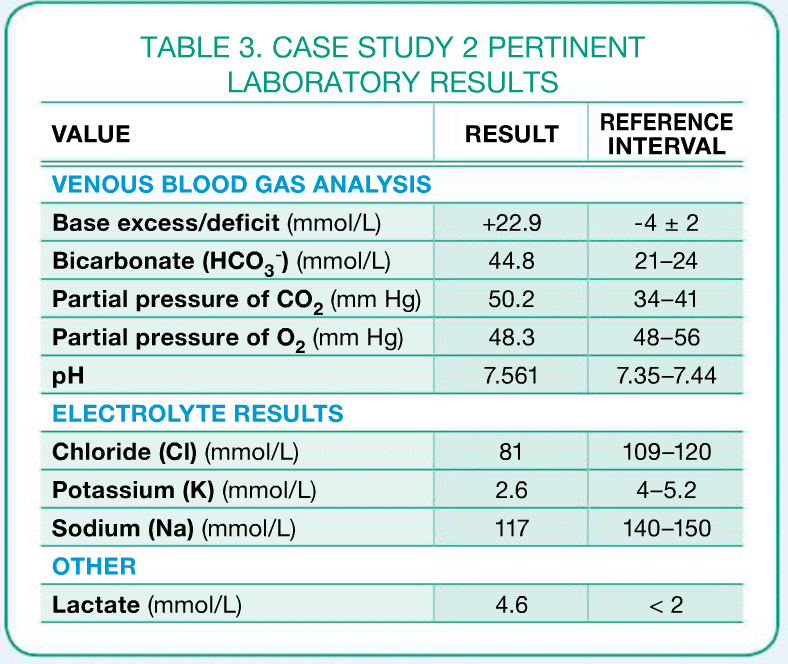 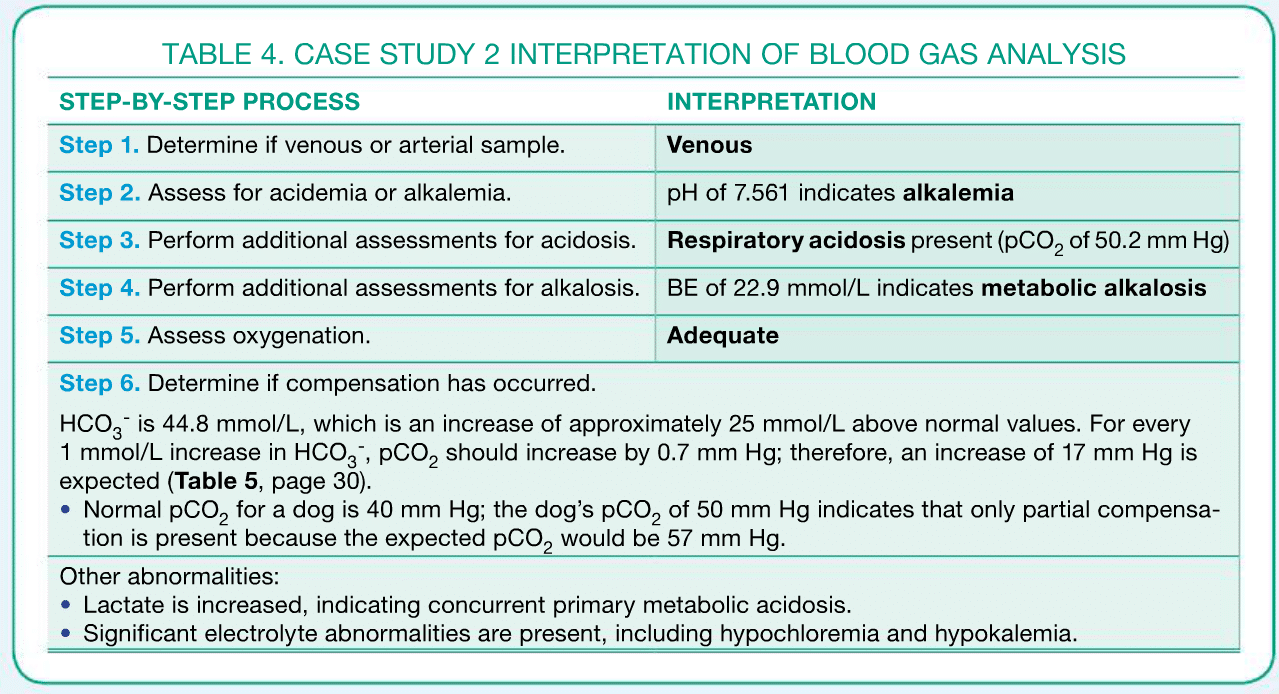 Lori S. Waddell, DVM, Diplomate ACVECC, is an adjunct associate professor in critical care at the University of Pennsylvania School of Veterinary Medicine, working in the Intensive Care Unit. Her areas of interest include colloid osmotic pressure, acid–base disturbances, and coagulation in critically ill patients. Dr. Waddell received her DVM from Cornell University; then completed an internship at Angell Memorial Animal Hospital in Boston, Massachusetts. After her internship, she worked as an emergency clinician in private practice until pursuing a residency in emergency medicine and critical care at University of Pennsylvania.