The 2019 AHS Heartworm Incidence Survey shows that heartworms maintain a stubborn hold in the United States.

A 1983 graduate of the College of Veterinary Medicine at Auburn University, Dr. Duke is the founder of the Bienville Animal Medical Center in Ocean Springs, Mississippi. He is a member of the South Mississippi VMA, the Mississippi VMA, and the AVMA, and is a Hospital Director for the AAHA. He has been published in numerous magazines and newspapers over his career. Dr. Duke has special interest in orthopedic and reconstructive trauma surgery. He has served on the AHS Executive Board since 2016.

Changes in weather patterns. Lapses in preventive medication compliance. Pet relocation. These factors and more were cited in a recent survey of U.S. veterinarians as factors contributing to the rise and fall of heartworm incidence in their practice areas.

To help veterinary professionals, shelter personnel, and pet owners understand heartworm trends in their areas, the American Heartworm Society (AHS) began tracking U.S. heartworm incidence in January 2002. Since then, the AHS Heartworm Incidence Survey has been conducted every 3 years, using heartworm testing data submitted by veterinary practices, reference laboratories, and animal shelters. Following the analysis of survey results, a U.S. heartworm incidence map is generated to provide a visual representation of the spread and severity of heartworm infections.

The AHS released the results of the most recent survey, which reflects testing results from the 2019 calendar year. Just under 6000 veterinary practices and shelters submitted data from more than 5.5 million pets. The 2019 map (Figure 1) was unveiled in April 2020. 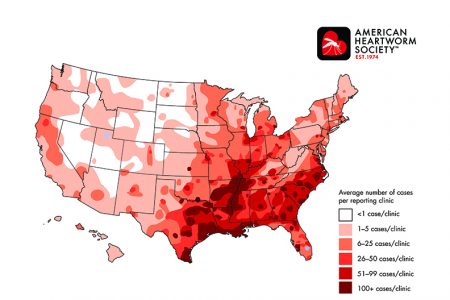 Figure 1. Heartworm incidence in the continental U.S. and Hawaii based on the 2019 AHS Heartworm Incidence Survey. Courtesy American Heartworm Society.

How Many Pets in the U.S. Are Heartworm-Positive?

While it is possible to use the survey data to make rough projections regarding heartworm prevalence, it is impossible to know exactly how many pets in the U.S. are infected with heartworms at any given time. An important factor is that heartworm diagnosis requires one or more blood tests that must be conducted in a veterinary clinic and/or reference laboratory, which limits diagnoses to patients seen in clinics and animal shelters. Dogs and cats not seen by veterinarians and/or not tested for heartworms during annual veterinary visits may be infected but go unrecognized for years. Unfortunately, the lack of veterinary care translates to a lack of heartworm prevention, and these pets are among those most likely to be positive, infecting mosquitoes and other dogs in the neighborhood.

While acknowledging these important caveats, the AHS hypothesized a conservative estimate of heartworm prevalence via the following calculations: 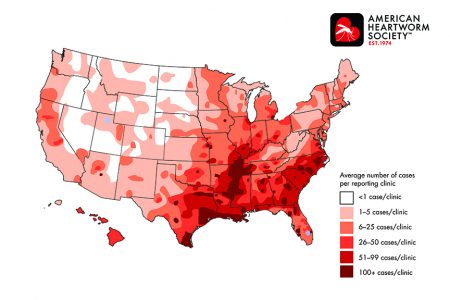 Almost 6000 veterinary practices and shelters participated in the AHS survey in early 2020. Veterinarians reported numbers of patients tested for heartworm infection, as well as the number of positive cases from that total. 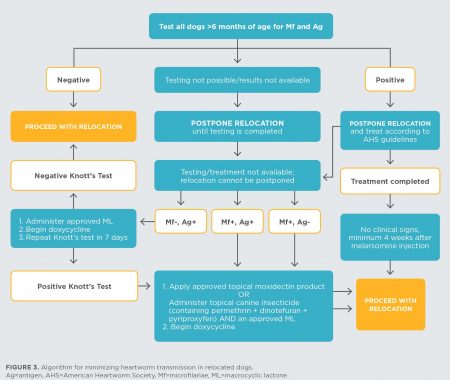 The results of the AHS Incidence Survey represent a mix of both bad and good news. On one hand, heartworms maintain a stubborn hold in the U.S., with the southeastern U.S. leading the nation in incidence. On the other hand, it is clear that there is a straightforward answer to this: persuade more pet owners to use preventives and convince them to protect dogs and cats year-round—with no lapses. In addition, adherence to the AHS/ASV recommendations on animal transport by veterinarians, shelters, and rescue organizations can help minimize the chance that heartworm-positive pets moved from one part of the country to another do not become reservoirs for heartworm infection in their new homes.

The 2019 AHS Heartworm Incidence map, as well as maps from 2001 to 2016, can be downloaded at heartwormsociety.org/veterinary-resources/incidence-maps.