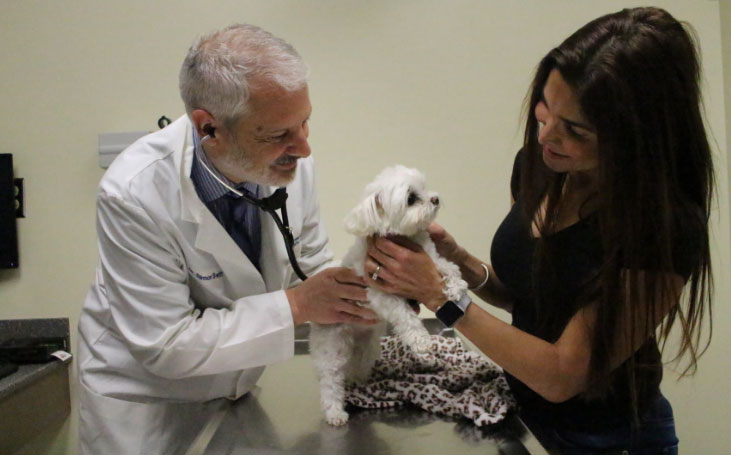 Dr. Simon Swift examines Zoey, a 12-year-old Maltese, while her owner, Janette Jordan of Oviedo, Florida, looks on. Zoey received a mitral valve repair procedure from Dr. Masami Uechi approximately one year ago in France and has come to UF subsequently for checkups. (Photo by Sarah Carey)
35     more
35
Shares
Gainesville, Fla. — The University of Florida College of Veterinary Medicine will launch an open heart surgery program for dogs later this year, becoming the only fully functional program of its kind in the United States and the only one to offer the complex procedure known as mitral valve repair. The program will be a collaboration between UF and renowned veterinary cardiologist Masami Uechi, D.V.M., Ph.D., of the JASMINE Veterinary Cardiovascular Medical Center in Yokohama, Japan. Uechi visited UF in February at the college’s invitation and gave a presentation on mitral valve repair. He regularly performs the procedure in Japan and he and his team have performed it in France and elsewhere. He has a success rate over 90 percent. “The plan is for Dr. Uechi to come with his team and equipment for a week in the spring to perform the procedure initially on one dog, then to return two months later to do four more cases. From then on, he and his team plan to operate on six dogs every two months,” said Simon Swift, D.V.M., a clinical associate professor and chief of the cardiology service at UF’s Small Animal Hospital. “This will lead to a teaching and research collaboration between UF, the JASMINE Clinic and Azabu University.” As part of an agreement Uechi reached with UF, he and his team would provide training in mitral valve repair surgery to UF cardiologists, surgeons, anesthesiologists, perfusionists, critical care specialists and other key staff with the ultimate goal of UF being able to operate and maintain the program independently. Mitral valve repair surgery treats a condition known as degenerative mitral valve disease, or endocardiosis. This disease has a genetic component and is responsible for about 75 percent of all canine cardiac issues, Swift said. The disease causes a thickening of the heart valves, weakening them and allowing a backflow of blood into the left atrium from the left ventricle, causing the heart to dilate and increasing left atrial pressure. Ultimately, fluid builds up in the lungs as pulmonary edema, causing congestive heart failure and, ultimately, death. Although any dog breed can develop degenerative mitral valve disease, small-breed dogs such as cavalier King Charles spaniels, dachshunds, Malteses, poodles and chihuahuas are most commonly affected. Older dogs are more likely to have the disease, but some breeds get this disease at a younger age. For example, 50 percent of cavaliers have this disease by age 5 or 6, Swift said. “We currently have three clients of the UF Small Animal Hospital that have gone to France to have the surgery, and we are sending a further two to Japan,” Swift said, adding that the first patient to receive the procedure would be selected based on need and severity of illness. Only patients deemed qualified to receive the procedure after referral from a veterinarian will be considered, he added. Prior to coming to UF, Swift worked as a cardiology specialist on faculty at the Liverpool University Teaching Hospital. He served as the cardiology adviser to the Cavalier Spaniel Club in the United Kingdom for 20 years. “Medication can slow the progression and we can treat these dogs medically once they develop heart failure, but the average survival is only about nine months,” Swift said. “It’s a surgical disease, and it needs a surgical cure.” The cardiology service at UF consists of four board-certified cardiologists with three residents supported by two technicians. In addition to the medical treatment of degenerative mitral valve disease, UF veterinary cardiologists have studied gene therapy of dilated cardiomyopathy and hypertrophic cardiomyopathy as well as advanced interventional techniques. “In collaboration with cardiologists at UF Health Shands Children’s Hospital, we have recently published details relating to the long-term follow up of stenting the right ventricular outflow tract in dogs with pulmonic stenosis, a congenital disease in which this area is narrowed,” Swift said. The UF Small Animal Hospital has the expertise and facilities to support this complex work, Swift said, and the pediatric bypass team at UF Health has offered to assist the new program in the early stages. Uechi has visited several universities in the United States over the past five years and has performed this surgery on an occasional basis, but the UF program represents the first time he and his team have made a formal agreement to come on a recurring basis with visa status to work in the U.S. “We want to give the maximum effort to save many dogs with mitral regurgitation, working with the UF team,” Uechi said. “I am very excited to develop innovative medical and surgical treatments through academic exchanges between UF, JASMINE and Azabu University.”