Early Diagnosis of Chronic Kidney Disease in Dogs and Cats: Use of Serum Creatinine and Symmetric Dimethylarginine

Chronic kidney disease (CKD) is a common cause of decreased quality of life as well as death in dogs and cats.

Chronic kidney disease (CKD) is a common cause of decreased quality of life as well as death in dogs and cats. The prevalence of CKD has been estimated to be 0.5% to 1% in dogs and 1% to 3% in cats,1,2 but it increases with age, especially in cats. An estimated 30% to 50% of cats 15 years of age or older have CKD.3-5

Although not proven by prospective, controlled clinical trials, it is logical to assume that early diagnosis—followed by renoprotective treatment of CKD—can slow its progression in dogs and cats. Firm evidence shows that dietary management can slow the progression of CKD, and increasing evidence suggests that antiproteinuric treatments also have this effect.10-14

Early, nonazotemic CKD—International Renal Interest Society (IRIS) stage 1—in dogs and cats may be associated with:

Plasma clearance techniques (eg, iohexol plasma clearance) that do not require collection of urine have led to simplified measurement of GFR in recent years. However, due to expense, time, and labor, GFR is rarely measured in the practice setting.

Serum creatinine (sCr) concentrations are commonly used as a surrogate for GFR because they have an inverse relationship. In early CKD, relatively large changes in GFR are associated with small changes in sCr concentration, while the opposite is true in later stages of CKD. Unfortunately, this relationship is not linear (Figure 1), which limits the sensitivity of sCr for detection of early renal disease. 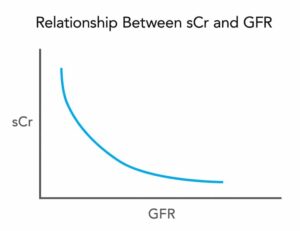 FIGURE 1. Curvilinear inverse relationship between serum creatinine (sCr) and glomerular filtration rate (GFR). Note that, on the right side of the graph, relatively large reductions in GFR result in only minor changes in sCr, while the opposite relationship is demonstrated at the top of the graph.

Interpretation of sCr concentrations can also be influenced by the method of analysis (Jaffe reaction versus enzymatic reaction; benchtop versus reference laboratory). Comparing sCr concentrations from the same patient when more than one laboratory or method is involved does not always provide an “apples to apples” comparison.

One of the most disconcerting aspects of sCr interpretation is the relatively large variation in reference intervals between laboratories, which can lead to false-positive and false-negative diagnoses of azotemia.15,16 Reference intervals need to be individualized to each laboratory, but many veterinary nephrologists have suggested that a threshold is crossed over at IRIS stage 2 CKD:

sCr concentrations must always be interpreted in light of the patient’s muscle mass, urine specific gravity (USG), and physical examination findings in order to rule out volume-responsive and postrenal causes of azotemia. For example, a high normal sCr concentration in an older cat with loss of muscle mass may indicate decreased renal excretory function. Conversely, a high sCr concentration in a dehydrated dog with a USG of 1.040 would suggest prerenal azotemia.

Despite all these potential pitfalls, longitudinal assessment of sCr concentrations (analyzed by consistent methods) is an excellent tool to assess renal function and diagnose early CKD. For example, a sCr concentration that increases from 0.7 to 1.4 mg/dL over several years in a patient without evidence of dehydration or an increase in muscle mass could indicate a minimum 50% reduction in GFR. The reduction in renal function may be greater than 50% due to compensatory hypertrophy of remaining nephrons. Increases in sCr of at least 0.3 mg/dL are more than would be expected with normal assay variation when the same method is used.

SDMA is derived from intranuclear methylation of L-arginine by protein-arginine methyltransferases; it is released into the blood after proteolysis. SDMA is eliminated primarily by glomerular filtration and is not affected by tubular reabsorption or secretion. Therefore, it can be used as an intrinsic GFR marker.

Several studies in humans have documented the utility of serum SDMA concentrations as a biomarker of renal function; a meta-analysis of 18 studies involving more than 2100 humans documented a high correlation of SDMA to both GFR and sCr.18

Role as a Biomarker

In addition to correlating well with GFR, serum SDMA may be a more sensitive biomarker for detection of early CKD compared with sCr. In longitudinal studies in cats that developed CKD, SDMA increased above normal (> 14 mcg/dL) in 17 of 21 cats a mean of 17 months (range, 1.5–48 months) before sCr exceeded its reference range (> 2.1 mg/dL) (Figure 2).20 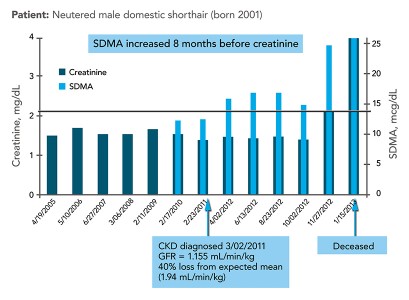 Another potential advantage to monitoring serum SDMA concentrations for early diagnosis of CKD compared with monitoring sCr is that changes in lean body mass in dogs and cats do not appear to influence SDMA.23,24

Preliminary results suggest that serum SDMA: creatinine ratios may have prognostic value in dogs and cats with CKD (as long as the SDMA value is > 14 mcg/dL); ratios greater than 10 were associated with mortality within 1 year.26

In patients with IRIS stage 2 CKD who have low body condition scores and SDMA concentrations of 25 mcg/dl or greater, the sCR may have led to an underestimation of renal function; IRIS stage 3 CKD treatment recommendations may need to be considered.

Similarly, in patients with IRIS stage 3 CKD who have low body condition scores and SDMA concentrations of 40 mcg/dl or greater, the sCr may have led to an underestimation of renal function; iris stage 4 CKD treatment recommendations may need to be considered.

On the basis of the preceding studies, it appears that compared with sCr, SDMA is a more sensitive renal function biomarker, and can facilitate early diagnosis and treatment of CKD.

A persistent elevation in SDMA (> 14 mcg/dL), accompanied by an isosthenuric USG, even if sCr levels are less than 1.4 mg/dL or 1.6 mg/dL in dogs and cats, respectively, indicates reduced renal function and IRIS stage 1 CKD. Similar to sCr, SDMA needs to be interpreted in light of hydration status and physical examination findings. For example, a dehydrated dog or cat with a SDMA concentration of 16 mcg/dL and a USG of > 1.040 likely has prerenal azotemia. In contrast to sCr, SDMA should not be affected by changes in muscle mass.

Dogs and cats with borderline sCr and/or SDMA concentrations should be retested:

Additional tests that may help further characterize potential renal disease and associated complications are listed in the Table. Bacterial pyelonephritis, partial or complete ureteral obstruction, hypertension, and proteinuria are all potentially treatable causes or complications of CKD. 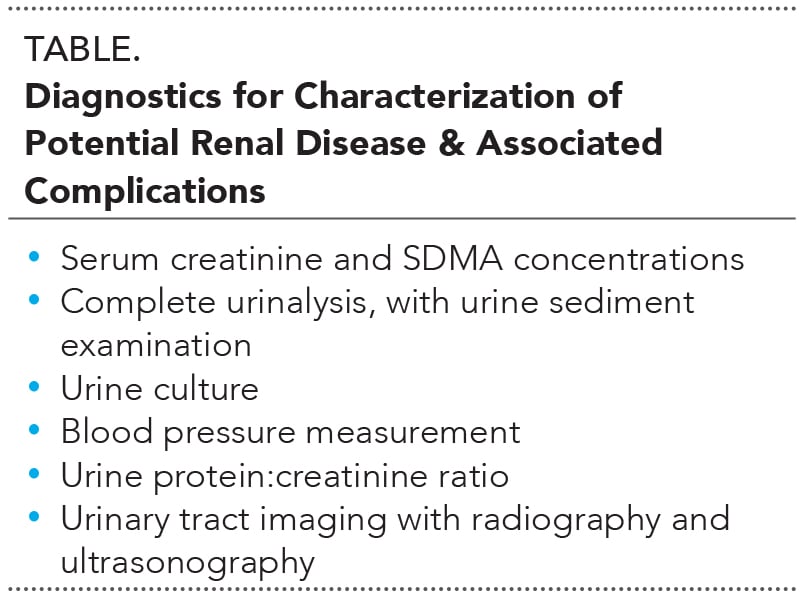 Incorporating evaluation of serum SDMA along with closer monitoring of sCr may facilitate early diagnosis of CKD in dogs and cats. In general, diagnostic results that indicate increased monitoring include:

Similar to sCr, results from SDMA analysis must always be interpreted in light of patient USG and physical examination findings in order to rule out volume-responsive and postrenal causes of azotemia. In addition, longitudinal assessment of serum SDMA concentrations is preferred over one-time assessments.

The author has participated in research projects funded by IDEXX Laboratories (idexx.com) and has been paid by IDEXX to attend conferences/meetings as a key opinion leader.