By the Numbers: Feline Urinary Diseases

A look at the prevalence of cats with urinary diseases presented to Banfield Pet Hospitals in 2015 and what these numbers mean to the practitioner.

In each issue of Today’s Veterinary Practice, Pet Health by the Numbers correlates an article topic with statistics provided by Banfield Pet Hospital (banfield.com). These statistics are extracted from data collected from the medical records of nearly 2.5 million dogs and nearly 500,000 cats presented to more than 920 Banfield Pet Hospitals in 2015. 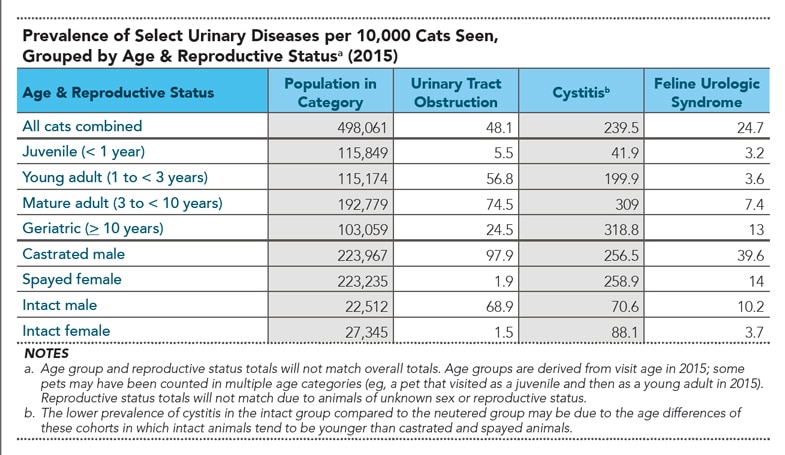 Path to Pet Wellness: This dataset is an interesting look at the diagnosis of cats presented to their primary care veterinarians with lower urinary tract signs (LUTS). The main causes of both obstructive and nonobstructive LUTS in cats include feline interstitial cystitis, urolithiasis, urethral plugs, bacterial infection, anatomic abnormalities, and neoplasia.

From this data, only a small number of cats were identified as having feline urologic syndrome (FUS)—a term that historically had been used to describe cats with idiopathic LUTS with or without urethral obstruction (UO)—when all other causes have been excluded.1 This term has been largely replaced by feline idiopathic or interstitial cystitis (FIC), which may explain the low number of cats with the diagnosis of FUS.

The most common diagnosis in this dataset is cystitis, which likely includes cats with FIC as well as cats with bacterial cystitis. FIC is cited as the most common cause of LUTS in cats, which is similar to the data presented here.2-4 The literature on a gender predisposition to FIC has been conflicting with studies from the United States citing male and female cats affected equally,2,5,6 as noted in this dataset; however, recent studies from Europe and a large epidemiologic study from the U.S. have demonstrated a male predisposition.3,7,8

Bacterial cystitis is a less common cause of LUTS and is cited to occur in 2% to 13% of cats.4,8,9 Consistent with the literature, UO was found to occur most commonly in young and mature adult male cats due to the narrow penile urethra, and rarely occurring in female cats. UO is diagnosed in approximately 22% to 55% of male cats presenting with LUTS.3,4,6,7

As both recurrence of UO and idiopathic cystitis is common, it is possible that cats are represented more than once in this dataset. This data does not specifically identify cats diagnosed with urolithiasis, which may cause both obstructive and nonobstructive LUTS. In the most recent studies, urolithasis was found in 29% to 47% of cats with UO.10,11