This article provides an overview of canine infectious respiratory disease (CIRD) from the perspective of clinical manifestations and prevention, including vaccines and vaccination protocols.

No matter the name, kennel cough is one of the most common canine respiratory infections. As a clinical syndrome, it has undergone changes in etiology, treatment recommendations, and options for prevention. The causes are many and include a growing list of pathogenic bacteria and viruses.1-7 The most notable changes, however, are found in vaccine options and claims of efficacy.

The controversies in this area include:

CIRD is well recognized as a contagious upper respiratory infection of dogs resulting from bacterial or viral infection. Because clinical manifestations vary according to the primary infecting agent, or combination of agents, CIRD is appropriately referred to as a respiratory syndrome. B bronchiseptica is commonly implicated as the principal cause of kennel cough;8 however, it is by no means the exclusive, nor is it the most virulent, pathogen implicated.

Bacteria recovered from dogs exhibiting signs consistent with CIRD include:

B bronchiseptica. B bronchiseptica is a gram negative bacterium capable of infecting multiple species, including humans, and it can potentially be transmitted from dogs (and possibly cats) to humans.

For reasons not fully understood, these “innocent” bacteria are able to transition into highly pathogenic organisms. Bordetella virulence is linked to a gene complex (Bvg) capable of expressing multiple, well defined virulence factors (toxins) that cause serious, rapid injury to respiratory epithelium.9

Streptococcus equi subspecies zooepidemicus. Recently, S equi subspecies zooepidemicus, a gram positive bacterium, has gained attention as a zoonotic infection of horses. Althoughnot a commensal organism in dogs/cats, S zooepidemicus is capable of colonizing upper respiratory epithelial cells of dogs and cats. It appears to be a significant cofactor in upper respiratory infections of dogs and cats and has been attributed to fatal necrohemorrhagic pneumonia in outbreaks of CIRD in shelters.3

Primary pathogens in CIRD include:5,7

Additional viruses recovered from dogs with CIRD include:

Clinical signs vary based on the individual agent responsible for infection in clinically affected dogs.

Viral pathogens tend to be associated with clinical signs ranging from acute onset, highly contagious cough with expectoration of mucus that typically lasts 1 to 2 weeks to mild or no clinical signs (seroconversion only). Although coughing may persist for several weeks, dogs tend to effectively clear infectious viruses within 2 weeks following onset of signs.

Bacterial pathogens tend to be associated with not only cough, but systemic illness characterized by mucoid to mucopurulent nasal and ocular discharge, fever, and loss of appetite. Other clinical findings include orthopnea, dyspnea, and even life-threatening pneumonia, particularly in young animals. Clinical signs can persist for several days or longer depending on treatment administered.

Clinical illness associated with individual pathogens, however, does not necessarily represent the spectrum of clinical manifestations encountered in practice. For example, reports of dogs with confirmed CIV infection indicate that some simply seroconvert without developing significant respiratory signs, while others die.

However, it is unlikely that CIV, acting alone, causes such dramatic variation in clinical outcomes; CIRD likely results from the complex interaction between:

The occurrence of co-infection explains, at least in part, why predicting clinical outcomes of CIRD in individual dogs can be difficult, and it explains why well vaccinated dogs still develop kennel cough.

Routine vaccination of dogs at risk for exposure is indicated and generally effective in reducing severity of cough in challenged dogs, despite the inability to immunize dogs against each of the known CIRD pathogens. Table 1 lists the pathogenic viruses and bacteria associated with CIRD for which vaccines are available in the U.S. 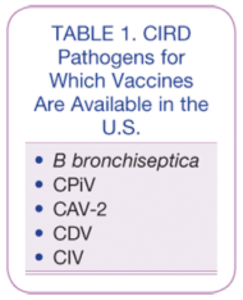 Several types of vaccine (Table 2) are available for administration to dogs by the intranasal, oral, and parenteral (subcutaneous) route. The constituents and the routes of administration of commercially available vaccines vary. The route of vaccine administration indicated by the manufacturer must be strictly followed.

Prophylactic Use of Antibiotics

Although not indicated for the prevention of signs of CIRD in individual pets, I have utilized doxycycline, 5 mg/kg PO Q 24 H for 5 days, administered to all dogs entering a large animal shelter experiencing high rates (> 50%) of acute onset cough. Follow-up over a 30-day period indicated:

Anecdotal observations suggest that empirical, daily administration of a broad-spectrum antibiotic may be of benefit in managing endemic respiratory disease associated with bacteria among shelter-housed dogs. While the cost of doxycycline may prohibit implementing programmatic treatment of all dogs entering a shelter, other less expensive, broad-spectrum antibiotics are available and may augment attempts to reduce the frequency or severity of CIRD in populations of co-housed dogs.

Nosodes are not recommended for the treatment or prevention of CIRD because:

There is no definition of a universal vaccination protocol applicable to all dogs. In fact, the availability of a diverse selection of vaccines against one or more agents of CIRD (Table 2) continues to raise the questions:

The overall quality of protection a dog derives from vaccination against CIRD is most likely correlated to the route of administration and the number of antigens administered.

Vaccines should only be administered to healthy animals. For example, administering a live, avirulent B bronchiseptica vaccine (intranasal or oral) to a dog concurrently receiving an antibiotic may exert an antibacterial effect on the vaccine antigen, resulting in reduced to no immunity.

While manufacturer advertisements and claims of vaccine efficacy can lead to confusion regarding vaccine selection; veterinarians recommending vaccination against CIRD must base selection on several factors:

Intranasal vaccines can be administered as a single dose as early as 3 to 4 weeks of age (see manufacturer label instructions) because maternally derived antibody (IgG) does not interfere with mucosal immune responses (secretory IgA). Although impractical among individual household pets, puppies housed in high-risk environments (animal shelters) may benefit from early vaccination (ie, at 3–4 weeks of age). In this case, intranasal vaccine may need to be repeated at 2 to 4 week intervals until 12 weeks of age.

Assessment of exposure risk is particularly important when selecting a vaccine. For dogs with limited risk for exposure, administration of any combination of parenteral, oral, or intranasal vaccines is indicated. In high-risk environments, however, administering either the oral or parenteral B bronchiseptica vaccines alone limits the scope of protection to B bronchiseptica; neither product contains vaccine against CPiV or CAV-2.

Following a single dose of intranasal B bronchiseptica vaccine, dogs have shown protection against aerosol challenge by 48 to 72 hours.11,12 Vaccination with oral B bronchisepticavaccine is expected to induce rapid-onset mucosal immune response similar to the intranasal vaccine.13,14

1. Vaccine Loss Following Administration
Following intranasal administration of vaccine to dogs, subsequent sneezing and head shaking is likely to result in a small volume of vaccine dose being expelled from the nose; however, it is unlikely that this degree of vaccine loss reduces efficacy due to:

When administering intranasal vaccine to small breeds, particularly small brachycephalic breeds, the volume of diluent may be arbitrarily reduced when reconstituting lyophilized vaccine antigen. Doing so reduces the volume of vaccine that reaches the nasopharynx without reducing antigen concentration or vaccine efficacy.

Due to the absence of published studies, administering a dose of oral B bronchiseptica vaccine by mixing the dose with food is not recommended. Doing so may result in significantly reduced antigen contact with mucosal surfaces and, thus, ineffective immunization.

When administering an intranasal vaccine, veterinarians may encounter sufficient resistance in some dogs to warrant switching to a parenteral or oral vaccine.

Switching from Intranasal to Parenteral. Intranasal vaccination may not consistently result in significant levels of serum IgG. Therefore, administration of 2 parenteral doses, 2 to 4 weeks apart, is recommended, regardless of the dog’s age when the dosing route is changed. The dog may be revaccinated annually thereafter.

Vaccines indicated for protecting dogs against CIRD must be administered in accordance with the manufacturer’s recommendations. See The Do Nots of Vaccine Administration.

Parenteral CDV + canine parvovirus (CPV) + CAV-2 vaccine combined with CPiV is among the multivalent vaccines most commonly administered to dogs in the U.S. and Canada.

Because intranasal B bronchiseptica vaccine may also include vaccine against CPiV or CPiV + CAV-2, dogs can receive both parenteral and intranasal vaccine for the same virus. There is no risk associated with doing so, even if administered during the same appointment.

Immunologically, dogs vaccinated against B bronchiseptica, CPiV, and CAV-2 by both parenteral (circulating IgG) and mucosal (secretory IgA) routes (oral and intranasal) at the same time may derive a greater degree of protection than those vaccinated either parenterally or mucosally. However, no scientific studies exist that confirm this.

The intricacies of systemic versus mucosal immunity are rather complex, and few studies are available that even attempt to “measure” mucosal immune responses. Mucosal immunity to B bronchiseptica does appear to involve mechanisms other than secretory IgA. However, further discussion of this topic is outside the scope of this article.

Published reports document the role of B bronchiseptica as a primary respiratory pathogen in humans, and it can be transmitted from dogs, cats, and rabbits to humans and other animals.

Postvaccinal sneezing and/or coughing are commonly reported in dogs that recently received intranasal vaccines. Reports of human infection with B bronchiseptica have raised concerns about administration of avirulent live (oral or intranasal) vaccine to dogs owned by immunocompromised individuals and families with young children (see Was It the Vaccine?). 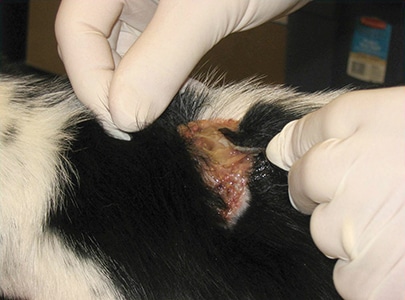 Figure. Spontaneous rupture of a subcutaneous abscess in a dog 5 days following parenteral administration of an intranasal vaccine containing avirulent live B bronchispetica.

Canine infectious respiratory disease is still among the most frequently encountered respiratory infections reported in dogs. Despite the availability and widespread use of vaccines for many of the viral and bacterial pathogens implicated, infections are still reported. The discovery of new respiratory pathogens for which vaccines are not currently available highlights the fact that even well vaccinated dogs can still develop CIRD. Due to the contagious nature of the organisms involved, animal shelters, dog day-care centers, rescue organizations, and veterinary hospitals continue to be recognized as high-risk environments for development of CIRD.

ichard B. Ford, DVM, MS, Diplomate ACVIM & ACVPM (Hon), is Emeritus Professor of Medicine at North Carolina State University’s College of Veterinary Medicine. He is a past president of the NAVC Conference and is a member of the scientific program committee. He serves on the AAHA Canine Vaccination Task Force and AAFP Feline Vaccination Advisory Panel. He received his DVM from Ohio State University and completed an internal medicine residency at Michigan State University.