With Legalization on the Rise, Veterinarians Warn Against Pets Getting Into Pot 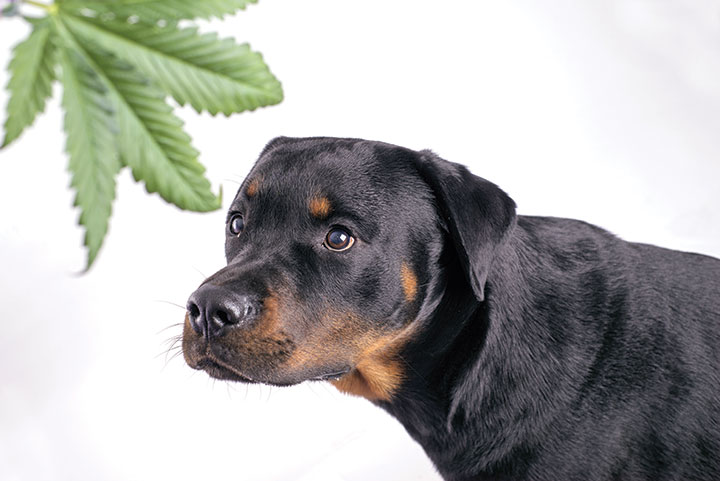 Thirty-three states and the District of Columbia now have legalized pot in some form. And since Colorado ushered in recreational marijuana in 2014, 10 more states and Washington, DC, have followed. Illinois Governor JB Pritzker signed a bill on Tuesday making Illinois the 11th state to legalize marijuana, and the American Veterinary Medical Association (AVMA) is encouraging all pet owners to make sure an increase in legalization doesn’t lead to an increase in pet poisonings.

As weed has become easier for people to get, it has also become a hazard for dogs.

While marijuana use can be a pleasurable experience for people, it can be scary and dangerous for dogs. Tetrahydrocannabinol (THC), the psychoactive substance in marijuana that produces a high for humans, is toxic to dogs, and can cause vomiting, incoordination, depression, sleepiness or excitation, low blood pressure, low body temperature and seizures. Death is rare but there have been a few cases reported.

Marijuana poisonings have been on the rise in dogs in recent years. In 2019, the ASPCA’s Animal Poison Control Center reported a 765% increase in calls about marijuana ingestion by animals over the same period last year. The Pet Poison Helpline has reported an over 400% increase in marijuana-related calls over the past six years. And anecdotally, the AVMA has heard from member veterinarians reporting an increased number of pets coming into their clinics with signs of marijuana intoxication.

Legalization of medical and recreational marijuana may increase the chances of dogs ingesting harmful amounts of the drug. For example, a 2012 study showed that cases of marijuana toxicosis at two Colorado veterinary hospitals quadrupled over a five-year period (2005-2010) during which the number of state medical marijuana registrations increased by more than 100 percent. Two dogs died after eating baked goods containing tetrahydrocannabinol, the active ingredient in cannabis, the study stated.

The Dangers of Edible Products

Edible products — such as pot brownies, candy bars and other baked goods — are a particular concern. Due to its lipophilic (“fat-loving”) nature, THC is highly concentrated in the butter used for such edible products compared to plant material. Therefore these products can cause pets to become particularly ill. These products could pose an increased risk due to additional toxic ingredients, such as chocolate, raisins or sugar-free sweeteners such as xylitol, which could compound their toxicity.

Veterinarians should warn pet owners that there may also be risks of smoking around their pets, as toxic exposures are possible. If the client smokes marijuana, the AVMA recommends that they do so away from their pets. As with any drug, they should make sure to keep it secure and inaccessible to their pets.

Even if the pet owner doesn’t bring marijuana into their house, legalization could increase the chances of their dog coming upon a discarded joint or edible while outdoors. Pet owners should be cautioned to keep their dogs on a leash and to prevent them from grazing while out on walks to avoid such exposures.

The Signs and Symptoms

If the pet shows any signs of marijuana toxicity it’s important that they be seen by their veterinarian. Signs and symptoms include: wobbly movements, like a person who is drunk; dribbling urine; a dazed or glazed look in their eyes; drooling; vocalizing; having seizures; low temperature and/or nervousness.Dogs exhibit these symptoms because THC — the psychoactive element of marijuana — is poisonous to them. While there’s nothing about the actual drug itself that will kill the animal, seeking veterinary medical attention is advised.

Cannabidiol, or CBD, on the other hand, is marketed to pet owners for a variety of pet ailments. But the research is incomplete about its efficacy for treating things like animal anxiety and seizures, and veterinarians are not allowed to recommend CBD to patients (although a bill making its way through California’s Senate could change that).

Read the survey results for what veterinarians say they know about medical marijuana.

Be prepared for most toxic exposures.

Pst the Top 10 Pet Toxicoses in your practice.