Keeping a wound in an optimally moist environment helps to promote faster healing. 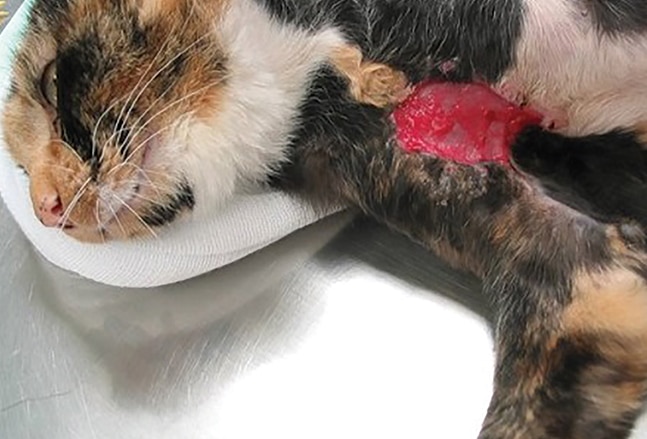 The needs of wounds differ as they progress through the healing process, and all wounds benefit from a properly moist environment that supports normal cell function. With just a few different moisture-retentive dressings (MRDs), the clinician can work synergistically with the cells to support microscopically precise debridement and repair for a wide variety of wounds, while providing the patient with a faster, healthier, and more comfortable healing experience.

The first step of wound care, whether from the viewpoint of white blood cells (WBCs) or the clinician, is debridement—that is, removing all contaminants, such as foreign material and bacteria, and damaged tissue from the wound.1

Forms of debridement include: 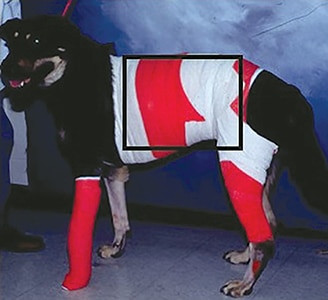 FIGURE 1. Several days after being hit and pinned under a car, this mixed-breed dog developed an eschar on its left side that ultimately sloughed, leaving a large wound. Surgical intervention was limited due to the client’s financial restrictions. Because this dog was treated before my exposure to moist wound healing practices, healing time was long. The boxed area shows the location of the wound. 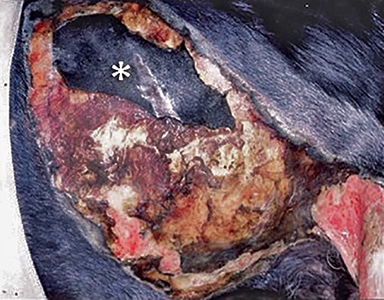 FIGURE 2. Patient from Figure 1; day 7 after injury: Necrotic tissue and an eschar (asterisk) remain after a large section of skin had sloughed. Microscopically, WBCs are selectively debriding the diseased tissue. Surgical debridement and lavage were performed after this photograph was taken. 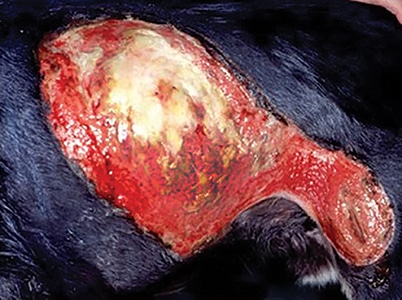 FIGURE 3. Patient from Figure 1; day 11 after injury: Granulation tissue is moving in from the periphery of the wound, while the central area is still undergoing debridement by WBCs. 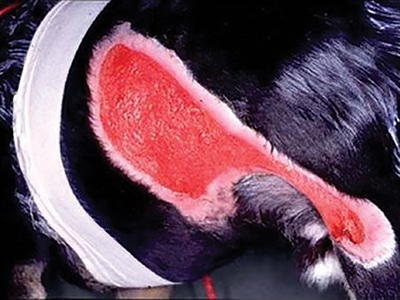 FIGURE 4. Patient from Figure 1; week 6 after injury: Granulation tissue is filling the wound. A rim of pink epithelial cells is migrating inward across the granulation tissue, building new skin. Contraction has pulled pre-existing skin inward, diminishing the size of the wound.

Wound closure is performed after all contaminants and nonviable tissue have been removed, and it can be orchestrated by the animal’s body or clinician.

The body typically accomplishes closure over 2 to 4 weeks via the repair (proliferative) phase of wound healing.2 During this phase, skin coverage of the wound is achieved through 2 simultaneous, yet independent, means—epithelialization and contraction.

This process is accomplished by creation of:

Wound fluid, a derivation of plasma that leaks out of blood vessels due to increased capillary permeability in response to inflammation,3 contains many beneficial factors for healing, including oxygen, nutrients, cytokines, growth factors, chemotactic factors, WBCs, enzymes that aid selective debridement, and systemic antibiotics, if the animal is receiving them.3-6 Wound fluid is serosanguineous in appearance.

Exudate, which has a more cloudy appearance, consists of wound fluid plus liquefied necrotic tissue created by WBCs via autolytic debridement and edema caused by inflammation, decreased patient mobility, and inadequate lymphatic or venous drainage.6 Exudate levels are proportionate to the amount of contamination, infection, and tissue damage in a wound, and should subside as the wound transitions from the inflammatory/debridement phase to the repair phase. Persistent exudate is an indication that more aggressive surgical debridement may be needed to remove foreign material, sites of infection, and/or nonviable tissues.

Surgical closure can be:1

Surgical closure should be reserved for wounds that contain only viable tissue, are free of contamination, and can be closed in a tension-free manner. Regardless of timing, surgical closure is preceded by one or more rounds of debridement and lavage, and, except in the case of primary closure, initial management as an open wound.

In some cases, open wound management may be continued until the wound closes on its own (second intention healing); this is appropriate when:

Wet-to-dry bandages involve placing saline-soaked gauze pads on the wound, then removing them after the bandages have dried and adhered to the wound. Although once a traditional choice in human and veterinary medicine, wet-to-dry bandages are no longer the standard of care because they compromise wound healing in many ways (Table 1).1,7-11

Moist wound healing (MWH) is now the standard of care.1,4,7,9,11 Moist—not soaking wet or dry—wound healing techniques can be achieved with MRDs, and numerous studies confirm the benefits of MRDs compared with traditional wet-to-dry or dry dressings (Table 1).4-6,9,12

Choice of MRD is based on the specific needs of the wound at that point in time (eg, debridement, granulation, epithelialization) and amount of exudate the wound is likely to produce:

Reasons that MRDs do not increase infection rates include:

MRDs impregnated with antimicrobial substances, such as honey, silver, or zinc, may be beneficial in infected wounds.4,7,14

Many MRDs are available (Table 2). In my experience, the clinician can manage most companion animal wounds by focusing on the following 4 types (in order from most absorptive to least absorptive):

Table 3 summarizes the characteristics and indications for each of these dressings. 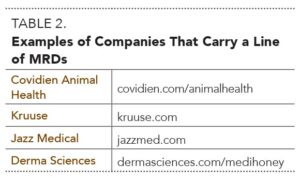 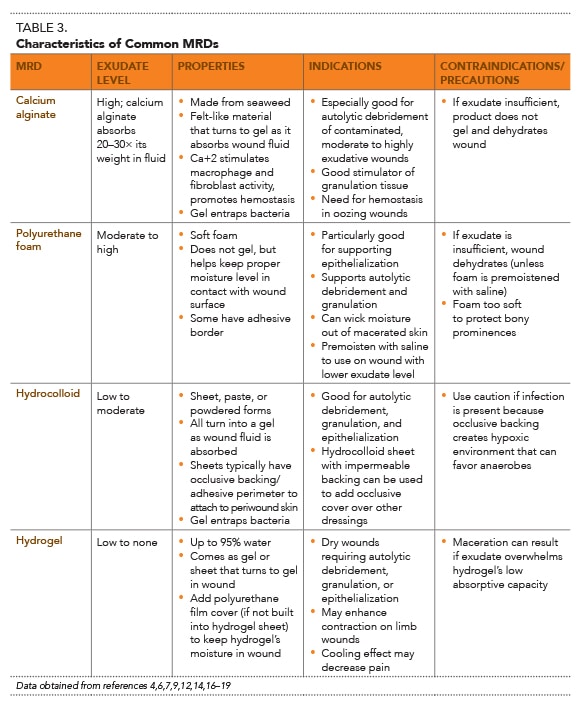 To select the most appropriate MRD, the clinician must ask:

Table 4 provides guidelines for selecting a dressing based on the answers to these 2 questions. Examples of appropriate dressing selection and application in veterinary patients are provided by Figures 5 to 16. 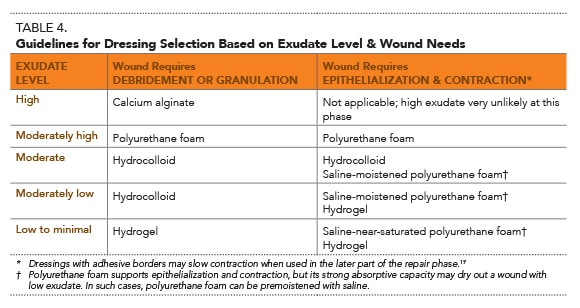 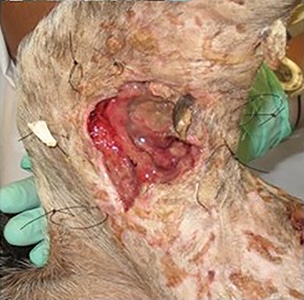 FIGURE 5. A German shorthaired pointer dog with multiple maggot-infested bite wounds. The appearance of this right lateral wound near the stifle was typical of this dog’s wounds. After the dog was anesthetized, wounds were lavaged and debrided of clearly nonviable tissue and maggots. Sutures were placed around the wound to secure a tie-over bandage. 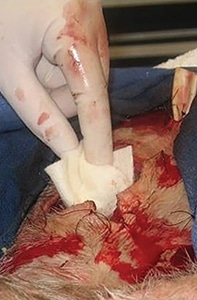 FIGURE 6. Patient from Figure 5: Calcium alginate was placed in the wounds to absorb the anticipated high level of exudate and support ongoing autolytic debridement by WBCs. 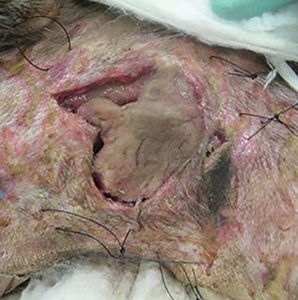 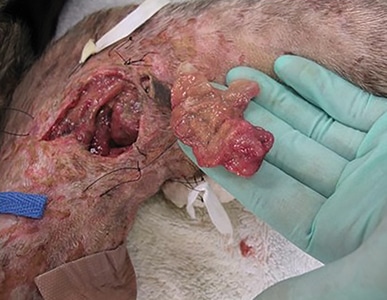 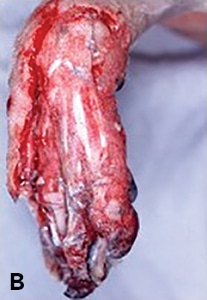 FIGURE 9. Degloving wound on the distal limb of a small-breed dog: This fresh wound with extensive damage is expected to be highly exudative, making calcium alginate an appropriate choice (A). Granulation tissue is forming, but the wound still has a moderately high exudate level; therefore, a polyurethane foam dressing is appropriate (B). 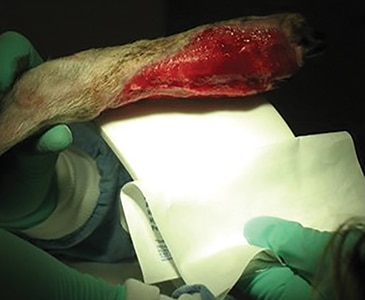 FIGURE 10. A 5-year-old border collie was hit by a car and sustained a degloving wound of the distal left hindlimb with exposed bone and tendon. Granulation tissue was forming with the use of MWH techniques. Polyurethane foam was selected due to the expectation of a moderately high exudate level and need for additional granulation and epithelialization. 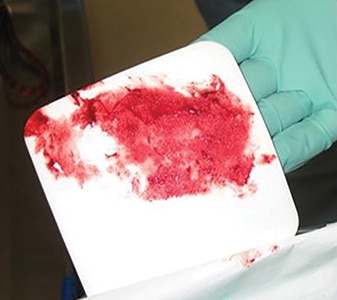 FIGURE 11. Patient from Figure 10: The polyurethane foam dressing was pressed onto the wound to create an imprint, then cut around the imprint so that the dressing would fit in the wound bed and not overlap skin. 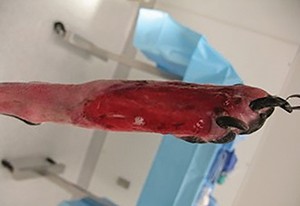 FIGURE 12. Patient from Figure 10: Six days and 2 bandage changes after the previous images (Figure 10 and 11) were taken, the wound had a healthy granulation bed and epithelialization was underway. A skin graft was then performed. 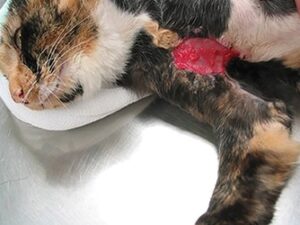 FIGURE 13. Nonhealing axillary wound—that had dehisced after each of several attempts at closure—in a cat. Prior to this image, the wound had no granulation tissue and a moderately high exudate level; thus, it was bandaged with a polyurethane foam dressing. At the time of this image, the wound required additional granulation tissue and epithelialization. Because the exudate level had decreased to a moderately low level, a polyurethane foam dressing—premoistened with saline before application—was used. The wound healed without requiring surgery. 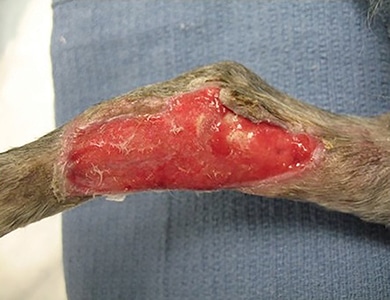 FIGURE 14. Wound on the medial tarsus of a dog’s limb that is producing a moderate level of exudate; granulation tissue is present but the wound requires epithelialization. Hydrocolloid or saline-moistened polyurethane foam are appropriate dressing choices. 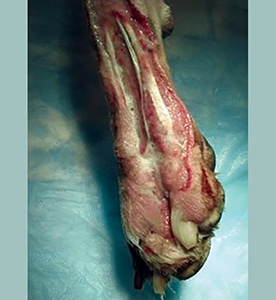 FIGURE 15. Degloving wound—that has been lavaged and debrided—on distal limb of border collie dog; residual moisture from the lavage can be seen. Due to the wound’s dry nature, a hydrogel dressing was selected. 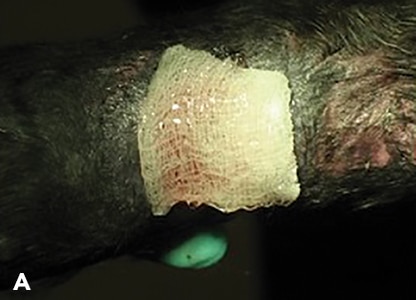 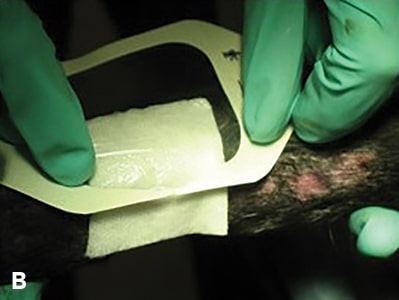 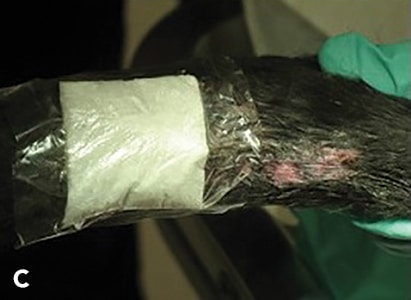 FIGURE 16. Dry, chronic wound on the tarsus of an 8-year-old Labrador retriever; hydrogel-impregnated gauze was placed after debridement (A). Following placement of a Telfa pad (covidien.com) over the hydrogel gauze, a polyurethane film was placed on top to secure the primary and secondary dressings and help maintain moisture in the wound (B and C).

As for any wound, use aseptic technique when handling the MRD and tissue.1 MRDs retain moisture in the wound. To avoid maceration (overhydration) of the skin and subsequent compromise of its epithelial barrier function, ensure the dressing is in contact with the wound surface but not with the skin (Figures 5, 6, and 10 to 12).9,14

When a semipermeable cover is not built into the MRD, adding an adhesive transparent polyurethane film over the MRD can be desirable in some cases (Figure 16). The semipermeable film allows gas exchange but serves as a barrier to bacteria and moisture. Thus, the film:7,9

Because the film is waterproof and has no absorptive capability of its own, it prevents wicking of excess exudate into the cast padding. Therefore, it should not be used in situations in which the underlying MRD cannot absorb and retain all of the wound’s exudate.

After placement of the MRD, bandage the wound in the standard fashion with:

The frequency of bandage changes depends on:

The dressing should be changed before it becomes oversaturated or dries out.

Adherence of the dressing may signal that the chosen dressing was:

In either case, a different dressing should be selected for the replacement bandage.

Making the Change to MWH

The use of MRDs and MWH requires some adjustments for clinicians more familiar with dry or wet-to-dry dressings.

Many MRDs combine with wound fluid to form a gel, and it is normal for this gel to have a slight odor, yellowish tinge, and slimy feel. While these characteristics can give the impression of infection, they are normal properties of these gels (Figure 8).

The wound and patient should always be examined for signs of infection, such as redness, swelling, pain, purulent discharge, and fever. In the absence of such signs, the bandage change can proceed as planned. If infection is present, MWH should still be used to support WBC function, with the dressing choice adjusted, if needed, to handle a higher exudate level.

The clinician new to MWH may initially feel uncomfortable waiting multiple days between bandage changes. One way to handle this concern is to, using aseptic technique, unwrap the bandage and look at the dressing in the wound. Upon noting, for example, that a calcium alginate or polyurethane foam dressing is not yet saturated, or that a hydrogel is still moist, the dressing is left in place and bandage replaced. After examining dressings for a few patients, the clinician becomes familiar with the behavior of MRDs and comfortable with the longer intervals between bandage changes.

Some clinicians may hesitate to use MRDs because the dressings themselves cost more than gauze or other dry dressings. However, the most cost effective dressing is the one that results in lowest overall cost of care.10 The overall cost of treating a wound with MRDs is lower than with traditional wet-to-dry or dry dressings for several reasons, including faster healing time, less frequent bandage changes (and, thus, lower material and labor costs), and less need for sedation during bandage changes.8-10

Responding to a Cardiac Emergency: Pericardial Effusion in Canine Patients