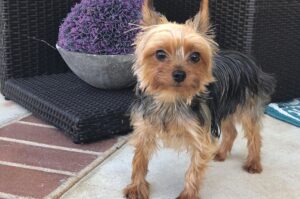 It began with a jump off the couch for a 2-year-old Yorkshire terrier named Ethel. Ethel broke both the ulna and radius in her right leg, and two previous surgeries had failed to properly heal them. MaryAnn Lawson, Ethel’s owner, consulted with veterinary orthopedic surgeons, all of whom recommended amputating the leg.

When Lawson asked about other options, one surgeon mentioned a new procedure that involves regrowing bone with the use of bone morphogenetic protein (BMP). Lawson was referred to Dr. Amy Kapatkin, DVM, MS, DACVS, with the Orthopedic Surgery Service at the UC Davis Veterinary Medical Teaching Hospital. UC Davis has been utilizing BMP to regrow bones in canine legs and jaws since 2012.

Dr. Kapatkin agreed to perform the surgery, but she told Lawson that there was only a 1% chance to save Ethel’s leg. Although BMP grows bone effectively, the bone needs to be stabilized with a bone plate to work and Ethel had almost no bone distal on her radius.

“Because Ethel had not used her leg for so long, her distal bones—carpal and metacarpal bones—had osteopenia,” recalls Dr. Kapatkin. “She had almost no distal radius left and we knew it was avascular, so we would have to stabilize her by also doing an arthrodesis across the carpal joint with a bone plate. Her metacarpal bone was smaller than most bone plates made, making this the most difficult part. It was also not that healthy and we were concerned it would not hold screws very well. It is why we gave her a very guarded prognosis. I was concerned that the implants would not hold in her remaining bone.”

These cases are considered at high risk of failure when using the traditional technique of rigid fixation and autogenous or allogenic bone graft; amputation is often recommended. “The reasons for the nonunions are not necessarily incorrect surgeries,” says Dr. Kapatkin. “Many of the cases I have used it on have had many unsuccessful surgeries and the bone is unhealthy with large gaps.”

The first step in the BMP procedure requires removal of all the failed implants. The bone has to be ostectomized to healthy bleeding bone on either end. The remaining bone ends are rigidly stabilized—usually with a bone plate. “BMP comes as a powder and must be sterilely diluted and allocated,” explains Dr. Kapatkin. “It is then frozen at –80˚ C until it’s used.” The UC Davis team is using the Medtronic compression resistant matrix (CRM) as the graft to hold the BMP. “BMP cannot be injected as a liquid into anything,” notes Dr. Kapatkin. The CRM is sterile soaked with 1 dose of BMP calculated for the correctly sized graft. It is pressed to fit into the gap, followed by routine closure.

Ethel’s case presented challenges, however. “I had to remove all the distal radius and then use the bone plate across the carpal joint and place it on the metacarpal #3 bone,” says Dr. Kapatkin.

In most cases, BMP patients are discharged a few days following surgery, but in Ethel’s case the veterinary team decided she should remain at UC Davis veterinary hospital for observation during recovery. “Nonunion after long-bone fracture repair in dogs represents a potentially devastating complication,” says Dr. Kapatkin. One postsurgery complication that arose for Ethel was that the bone plate used to stabilize the fracture—which typically remains in the patient permanently—started protruding from her leg due to the limited soft tissue and thin skin in her tiny distal limb. When it was decided that the plate was no longer needed, Dr. Kapatkin removed it to allow Ethel’s tissue to heal completely around the bone.

At Ethel’s 3-month recheck appointment, she was able to run on her new leg. “Without Dr. Kapatkin and her amazing team at UC Davis, Ethel’s story would be very different,” says Lawson. “She’s our little miracle.”

“We’re optimistic that our use [of BMP] in orthopedics will have long-term positive results,” says Dr. Kapatkin.

BMP is not commercially available in the USA; UC Davis is using it for research and has access.1

One World, One Medicine, One Health