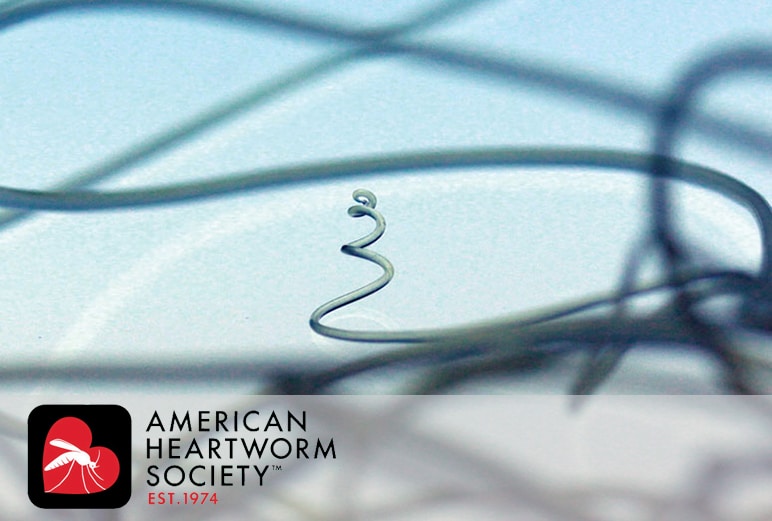 According to the American Heartworm Society, over one million dogs in the United States are currently infected with Dirofilaria immitis (heartworms). If diagnosed in a timely fashion, most infections can be managed medically with good results.

CS is a life threatening condition; therefore, it is extremely important that clinicians recognize and understand this syndrome. 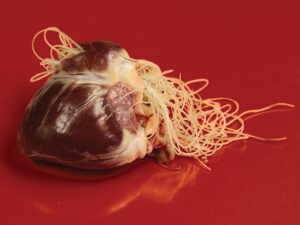 FIGURE 1. Classic caval syndrome in a dog with a high worm burden.

WHAT IS CAVAL SYNDROME?

CS is a specific condition that develops when a mass of heartworms becomes situated in the right ventricle, right atrium, and often, the vena cava (Figure 2). These worms partially obstruct the inflow tract to the right ventricle (Figure 3), interfering with closure of the tricuspid valve and consequently resulting in:1-5 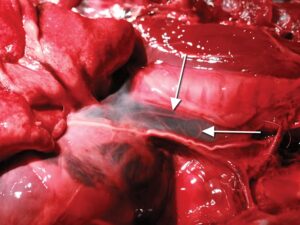 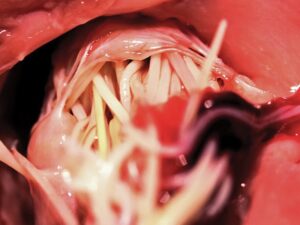 FIGURE 3. A mass of adult heartworms lodged within the tricuspid valve of a dog presented with caval syndrome (view from the right ventricle).

In the 1980s, a high level of scientific interest in CS led to an expanded—albeit incomplete—understanding of the condition’s etiology. Unfortunately, enthusiasm for the subject waned, and even today the etiology of CS remains incompletely defined.

While it is evident that more scientific studies are needed to completely explain this unique manifestation of a complex disease, information from earlier studies combined with more recent pictorial and clinical evidence allows formulation of a working hypothesis for the development of CS.

HOW DOES CAVAL SYNDROME DEVELOP?

The pathogenesis of HWD and the chain of events that leads to illness is quite complex. Dogs with natural infection may remain asymptomatic for extended periods of time, or may present with a variety of clinical signs (Table 1).6 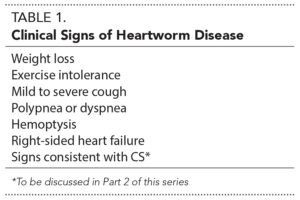 The wide variety of clinical presentations for heartworm infection (HWI) is expected due to the complex relationship between worm numbers, extent of vascular pathology, and individuality of each dog’s physiologic response, all of which result in the clinical variability observed between individual animals. Therefore, it is not surprising that trying to define specific causes of CS is complicated.

One logical explanation as to why heartworms may normally remain in the pulmonary arteries is:

If we assume that blood flow is the primary factor keeping adult heartworms constrained to the pulmonary arteries, it is logical to ask what condition—or series of conditions—might allow or cause multiple heartworms to retrogradely move into the right ventricle, atrium, and/or vena cava, as they do in CS.

WHY DO HEARTWORMS MIGRATE?

Studies in heartworm-infected dogs have shown that when hemodynamics are altered—forward flow is reduced and resistance to flow is increased—worms migrate toward the right atrium.

The effects of arterial obstruction on pulmonary arterial flow and its resulting impact on worm location in dogs heavily infected with heartworms were studied by Kitagawa and colleagues, who artificially induced obstructive disease by surgically placing silicone tubes, similar in size to adult heartworms, into the pulmonary arteries of infected dogs.8

A similar study utilized dead adult worms placed in the pulmonary arteries to mimic a more natural thromboembolic episode. In both scenarios, obstruction of the distal pulmonary arteries caused increased vascular resistance, reduction in blood flow, and resultant decrease in cardiac output. The live adult worm population subsequently moved or were forced, in a retrograde manner, toward the right atrium, thereby inducing CS.

The retrograde movement of heartworms and development of CS were similarly observed when cardiovascular collapse was experimentally induced.

In each of these studies, a resultant shock-like reaction led to cardiovascular collapse, and as cardiac output decreased, worms moved into the right atrium.

Although obstructive pulmonary vascular disease and cardiovascular collapse are entirely different disease processes, both lead to a dramatic decrease in pulmonary flow. If blood flow is indeed responsible for keeping adult heartworms constrained to the pulmonary arteries, it is plausible that the development of CS may be potentiated by any condition that causes a reduction in the normal velocity and/or volume of pulmonary blood flow.

WHAT CONTRIBUTES TO CAVAL SYNDROME?

Once believed to be the consequence of “too many worms to fit in the pulmonary arteries,” we now know that factors other than worm numbers are involved in the etiology of CS.4 The difficulty has been in defining these other “factors,” especially in dogs with natural infection.

Vascular obstruction commonly occurs in HWD and can result from several disease processes (Table 2).7,13-15 Individually, each of these obstructive conditions can cause increased resistance to blood flow, but when they occur in combination, the additive effect can be quite dramatic. 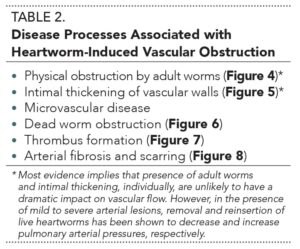 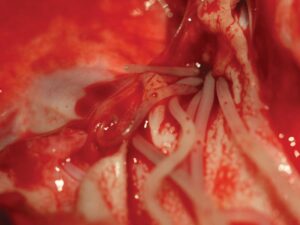 FIGURE 4. Adult heartworms occupying the lumen of a smaller branch of the pulmonary artery. 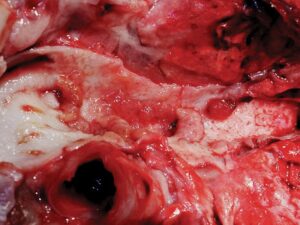 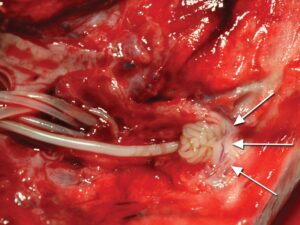 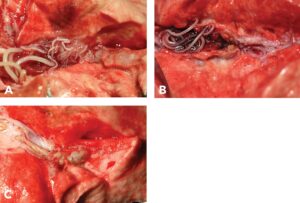 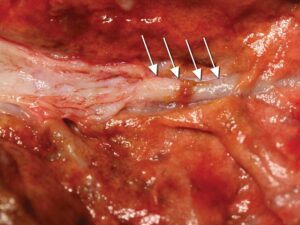 FIGURE 8. Vascular fibrosis (arrows) found in a dog presented with caval syndrome. Interestingly, only 6 worms were present, 5 of which were located in the right heart and vena cava.

Cardiac insufficiency can be a pathologic consequence of advanced HWD. Even without overt signs of right-sided heart failure, reduction in cardiac output can significantly impact hemodynamics, decreasing the ejected volume of blood.13 While many unrelated diseases can lead to cardiac insufficiency, HWD alone can notably diminish cardiac function through several mechanisms (Table 3). 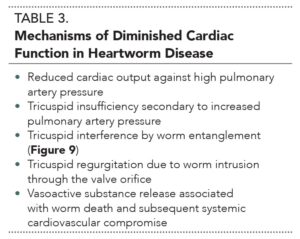 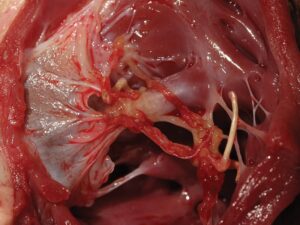 FIGURE 9. View from the right ventricle showing a dead heartworm intertwined in the chordae tendineae of the tricuspid valve.

Unlike obstructive disease in which blood flow is impacted solely by increased vascular resistance, cardiac insufficiency causes reduced flow due to diminished ejection of blood volume. In either case, because HWD can cause both obstructive disease and cardiac insufficiency simultaneously, a reduction in pulmonary arterial flow can become significant enough to allow heartworms to relocate to the right heart and/or vena cava.

Understanding the pathophysiology of CS is an essential first step to diagnosing and treating this serious and complex condition. While CS is not common, practitioners who see HWD should be prepared to identify patients with CS.

Stephen L. Jones, DVM, is the President of the American Heartworm Society and a general practitioner/practice partner at Lakeside Animal Hospital, Moncks Corner, South Carolina. He received his DVM from University of Georgia. Read more about Dr. Jones at lahmc.com/veterinarians.php.