Beyond Furosemide: The Role of Diuretics in Congestive Heart Failure Part 2 – Spironolactone

A look at spironolactone as a critical component of the pharmacotherapy of congestive heart failure.

Diuretics are a critical component of the pharmacotherapy of congestive heart failure (CHF). In humans with heart failure, 90% receive at least one diuretic.1 Of these, loop diuretics—furosemide, bumetanide, and torsemide—are the most potent and commonly used diuretics. When a single drug is administered in humans, furosemide is given 87% of the time.1

Furosemide has been, and remains, the diuretic of choice for acute and chronic management of CHF in both humans and animals since its release in 1966. However, other interesting options are now available, including:

Spironolactone is a synthetic 17-lactone drug and competitive aldosterone receptor (mineralocorticoid receptor) blocker (MRB). This antagonism of the MR in distal renal tubule cells results in an increase in urinary sodium and water excretion and decrease in potassium excretion.

In the dog, spironolactone is relatively quickly absorbed through the gastrointestinal tract into the plasma; then converted to several active metabolites.2,3 The bioavailability of spironolactone in dogs is highest when it is administered with food, reaching 80% to 90%.4

Using an experimental model of hyperaldosteronism, mimicking that in heart failure (see Heart Failure: Effects of Hyperaldosteronism), Guyonnet and colleagues found that the spironolactone dosage of 2 mg/kg PO Q 24 H restored the urinary sodium:potassium ratio to near normal via increased urinary sodium excretion and decreased urinary potassium excretion.4 On the basis of this result, and analysis of pharmacokinetic and pharmacodynamic data, the optimal dosage of spironolactone in dogs appears to be 2 mg/kg PO Q 24 H. The dosage established by this preclinical trial has been used in subsequent clinical trials.a,5 Of note, in this study, spironolactone was administered with food.

In animals with heart failure, chronic exposure to high concentrations of aldosterone:

An earlier study found that spironolactone had no effect on urinary sodium and water excretion in normal dogs when it was administered at dosages of 1, 2, 4, and 8 mg/kg PO Q 24 H for 8 days.6 Urinary potassium excretion, however, did decrease significantly at dosages of 1 and 2 mg/kg. These results—when compared to the results of the study by Guyonnet and colleagues—may be explained by the lack of hyperaldosteronism and administration of spironolactone to fasted dogs. While differences in timing of blood sampling for one of spironolactone’s active metabolites (canrenone) does not allow for direct comparison between studies, blood canrenone concentrations were apparently higher in dogs that received spironolactone with food.

Spironolactone was initially used to provide sequential nephron blockade and combat hypokalemia that resulted from the use of loop and thiazide diuretics. In the past 3 decades, the understanding of the consequences of excessive and prolonged aldosterone secretion in the progression and perpetuation of chronic cardiovascular and renal disease has grown significantly.7,8

Spironolactone and another synthetic MRB, eplerenone, have recently been evaluated in humans with mild to severe heart failure and low ejection fraction.9-11 The positive results of these studies showed that the addition of spironolactone or eplerenone to standard heart failure therapy—an angiotensin-converting enzyme inhibitor (ACEI) and a loop diuretic, with or without beta-blockers and with or without digoxin—led to a significant reduction in morbidity and mortality when compared with standard therapy alone.

These studies showed a significant benefit when additional blockade of the RAAS—in the form of MR blockade—was added to preexisting RAAS blockade with an ACEI. MR blockade is now considered the standard of care in humans with heart failure and low ejection fraction.12,13 The benefit seen with additional RAAS blockade in heart failure supports the concept of aldosterone breakthrough (see Aldosterone Breakthrough).

A similar study was performed in 212 dogs with naturally occurring myxomatous mitral valve disease (MMVD) and heart failure. This study demonstrated a 69% reduction in risk for cardiac morbidity and mortality when spironolactone was added to standard therapy (ACEI and furosemide, with or without digoxin) as compared with standard therapy alone (Figure).5 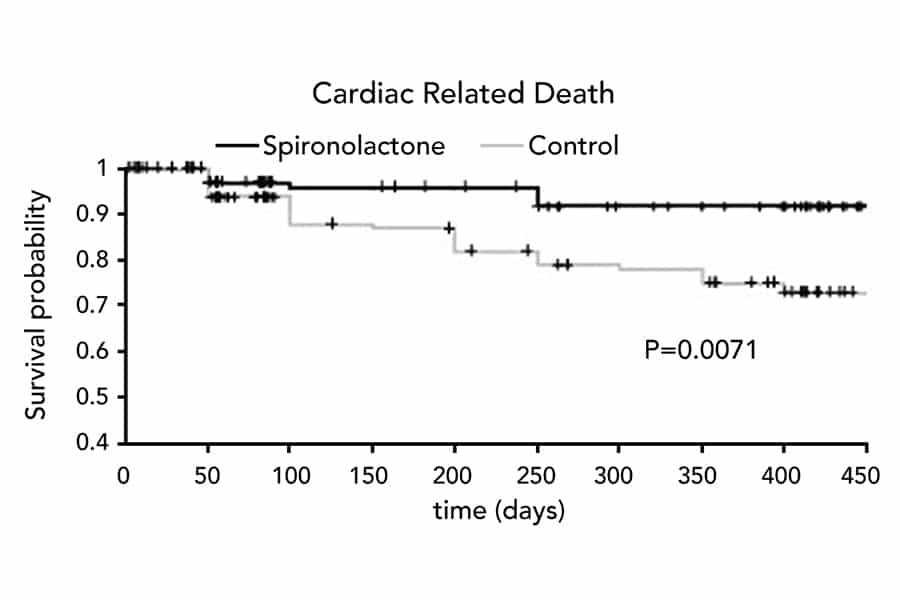 A separate safety analysis of dogs involved in the aforementioned study demonstrated that, when compared with dogs receiving placebo and standard therapy (loop diuretic, ACEI, and pimobendan), those receiving spironolactone in addition to standard therapy14:

In a study of Doberman pinschers with occult dilated cardiomyopathy (DCM), significant increases in serum potassium concentration (compared to each dog’s baseline values) were seen in those receiving both spironolactone and an ACEI.15 Although we deemed these changes clinically insignificant, in 50% of dogs, the serum potassium concentration exceeded the reference interval. Therefore, regular monitoring of serum electrolytes and renal values (as often as every 3 months) was recommended for Doberman pinschers receiving spironolactone and an ACEI.

Overall, regular monitoring of serum electrolytes and renal values is prudent in all animals receiving vasodilators and diuretics, including spironolactone and ACEIs. Finally, spironolactone in combination with ACEI therapy appears to be safe when used to treat dogs with naturally occurring asymptomatic MMVD, as well as those with occult DCM without preexisting azotemia.15,16

The 2009 consensus statement from the American College of Veterinary Internal Medicine defines the stages of heart disease and failure (Table) and provides guidelines for therapy of dogs with MMVD.17

Spironolactone is approved within the European Union as adjunctive therapy for canine heart failure, secondary to MMVD. Clinical trials are currently evaluating the effects of spironolactone in combination with an ACEI in the treatment of dogs with stage B2 and C MMVD.a,18 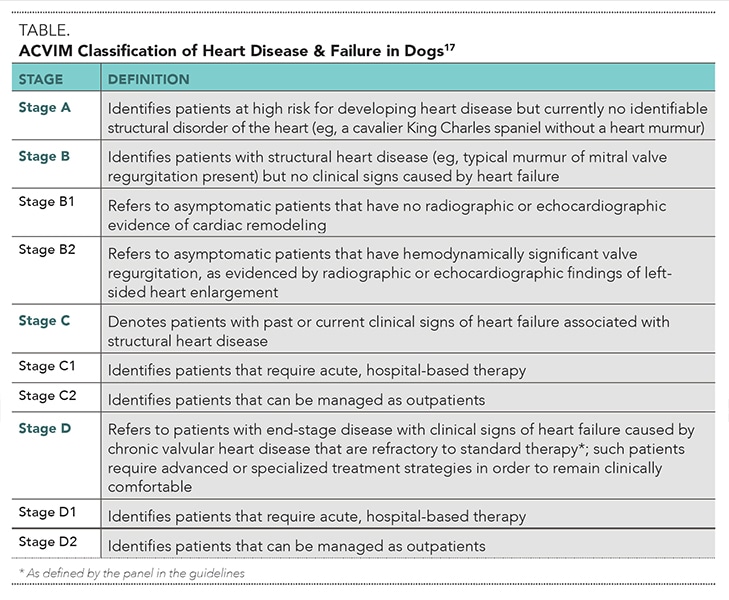 There are currently no consensus statements regarding the use of spironolactone in other diseases, such as DCM, heartworm disease, and congenital heart disease. Logic supports spironolactone’s utility and its history, along with research data, support its safety.

The role of spironolactone in the treatment of heart failure due to ventricular diastolic dysfunction and preserved systolic function (heart failure with preserved ejection fraction [HFpEF]) is an area of ongoing research.

The association between hyperaldosteronism and development of myocardial fibrosis in human and experimental animal models of hypertension is well established.19 Small studies in humans with HFpEF have shown that MR blockade with spironolactone improved diastolic function.20,21

Hyperaldosteronism and activation of the RAAS, in particular, are implicated in the pathologic ventricular remodeling and diastolic myocardial dysfunction in hypertrophic cardiomyopathy (HCM) in humans.23

Aldosterone is elevated in Maine coon cats with asymptomatic HCM,24 and use of spironolactone (2 mg/kg PO Q 24 H for 4 months) for asymptomatic HCM in cats has been evaluated.25 Unfortunately, this study did not show reduction in left ventricular mass or improvement in an echocardiographic parameter of diastolic function, and 4 of the 13 cats treated with spironolactone developed ulcerative facial dermatitis.

A double-blinded, placebo-controlled clinical trial has evaluated the use of spironolactone (1.7–3.3 mg/kg PO Q 24 H) in cats with heart failure due to cardiomyopathy (the majority of cats had HCM).26 All cats were also receiving furosemide and benazepril. The results of this study demonstrated an improved survival rate of 15 months in cats receiving spironolactone when compared to those receiving placebo. Also, at interim analysis27 (n = 16 cats enrolled), no cat receiving spironolactone had experienced ulcerative facial dermatitis.

The positive results from studies of MRBs in patients with heart failure and low ejection fraction support the existence of aldosterone breakthrough (ABT): the phenomenon in which RAAS blockade with an ACEI—with or without an angiotensin-receptor blocker (ARB)—is incomplete and aldosterone levels rise despite RAAS suppressive therapy.

UAldo:C Ratio
We use the urine aldosterone-to-creatinine (UAldo:C) ratio, which correlates to 24-hour urine aldosterone excretion,28 to assess RAAS activation in clinical patients and experimental RAAS activation,29-35 and propose a cutoff value of 1 mcg/g. This value is the mean +2 standard deviation of the UAldo:C ratio in a population of young (1–2 years of age) normal dogs from North Carolina State University Veterinary Hospital and Colorado State University Veterinary Hospital.36

Definition
There is no consensus regarding the definition (and, therefore, incidence), mechanism, and clinical implications of ABT in humans with chronic cardiovascular or renal disease, although its existence and importance are uniformly accepted.37 However, we suggest 2 definitions for ABT—based on UAldo:C ratio:

Incidence
Preliminary data from our clinics suggest that ABT occurs in dogs with heart failure due to naturally occurring heart disease, with an incidence of approximately 40%. This percentage is similar to that found in our model of RAAS activation as well as the incidence of ABT in humans receiving an ACEI. ABT also appears to occur early in the disease course.37

Monitoring the UAldo:C ratio may, therefore, help optimize an individual patient’s pharmacotherapy and determine whether spironolactone should be added as an adjunctive therapy to improve RAAS blockade.

Based on clinical and research data, we use spironolactone in almost all instances in which ACEIs are used, which includes dogs with the following:

Although preliminary data are promising, we do not feel there is yet adequate evidence for routine use of spironolactone in cats.

Practical Techniques from the NAVC Institute—brought to you by the NAVC and Today’s Veterinary Practice—provides the opportunity for you to experience the excellent education provided at the Institute within the pages of this journal.