Chiari-like malformation (CM) and syringomyelia are components of a structural central nervous system disease syndrome that primarily affects Cavalier King Charles spaniels (CKCS) and other small-breed dogs (BOX 1). CM is referred to in the veterinary literature by various names, including caudal occipital malformation syndrome, occipital dysplasia, Chiari malformation, and hindbrain herniation. In 2006, researchers meeting at the International Conference on Syringomyelia at the Royal Veterinary College in London agreed upon Chiari-like malformation as the correct terminology of the syndrome.1

The challenging aspect of this disease is that the clinical signs are often vague and nonspecific and overlap with other, more common, disease presentations such as dermatologic or otologic conditions. For this reason, it is important to understand the more common clinical presentations and incorporate Chiari-like malformation and syringomyelia (CMSM) into the list of diagnostic differentials.

CM is a complex developmental malformation of the skull and craniocervical vertebrae characterized by a conformational change, overcrowding of the brain, and subsequent partial herniation of the cerebellum through the foramen magnum (FIGURE 1). This causes compression of the brainstem and cranial cervical spinal cord and results in obstruction of the cerebrospinal fluid (CSF) channels at the craniocervical junction. Syringomyelia is defined as a fluid-filled cavity within the parenchyma of the spinal cord. Its pathogenesis is poorly understood, but it is hypothesized to be extracellular fluid accumulation secondary to abnormal flow of CSF.2 Patients with either CM or syringomyelia can be symptomatic or asymptomatic, which suggests that the disease syndrome may be multifactorial. 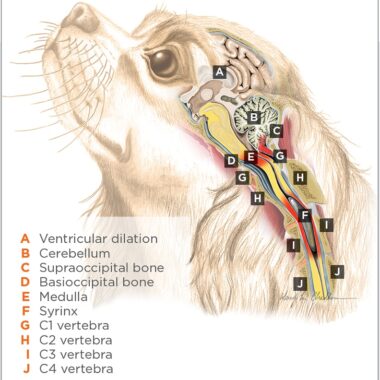 Figure 1. Schematic representation of Chiari-like malformation and syringomyelia. Note that the caudal aspect of the cerebellum (shaded in red) is herniated through the foramen magnum and is compressing the medulla. The syringomyelia (syrinx) is notable between C2 and C3. Illustration: Wendy Chadbourne of Inky Mouse Studios

CM is inherited in CKCS and is estimated to affect up to 95% of the population of this breed.3 Approximately 50% to 70% of CKCS with CM develop syringomyelia,4 although not all patients become symptomatic. Most dogs with CMSM start exhibiting clinical signs of disease as young adults, between 3 and 6 years of age; however, the age range is broad, ranging from younger than 6 months to older than 12 years. There is no sex predilection.

The most challenging aspect of CMSM is that the clinical signs are variable and vague and most often reflect manifestations of neuropathic pain (NP). NP is pain caused by damage or disease affecting the somatosensory nervous system. It is associated with abnormal sensations or pain from normally nonpainful stimuli; it may have continuous and/or episodic (paroxysmal) components. People who suffer from CMSM describe headaches, radiating pain affecting the arms and shoulder region, and paresthesia (pins and needles, burning or stretching sensations).5

The most common clinical signs in dogs are “phantom scratching” and unprovoked vocalizations seemingly resulting from poorly localizing pain. Phantom scratching is a behavior in which the patient exhibits scratching movements with the pelvic limb but does not actually make contact with the target body part (head, ears, neck, shoulder, or flank region).

Many patients clinically affected with CMSM do not exhibit abnormalities on a routine examination; presumptive diagnosis may be made on history alone. In the author’s experience, the most consistent physical examination finding in these patients is pain upon palpation of the atlanto-occipital region. Other abnormalities noted on examination may include cervical or head pain on palpation, ataxia, tetraparesis, cranial nerve abnormalities (menace deficit, facial nerve paresis, nystagmus), scoliosis, and proprioceptive deficits (TABLE 1). 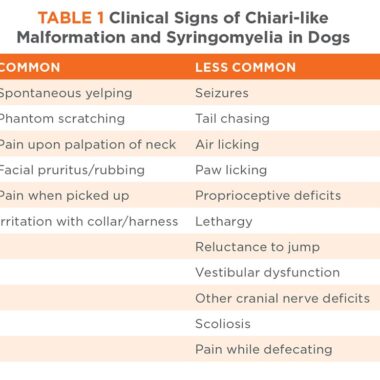 Before magnetic resonance imaging (MRI) became more available in veterinary medicine, CMSM was seldom diagnosed. The standard of care for the diagnosis of CMSM is MRI of the brain and cervical spinal cord (FIGURE 2), although some recommend imaging the entire spine for the presence of syringomyelia.6

In patients with CM, MRI shows caudal cerebellar herniation and compression, occipital dysplasia, and attenuation of CSF flow in the cranial cervical region. Syringomyelia appears as a linear hyperintensity within the spinal cord, most commonly from C1 to C4. Other concurrent, related abnormalities may include ventriculomegaly, kinking of the medulla, atlanto-occipital overlap, and dorsal compression at C1-C2. 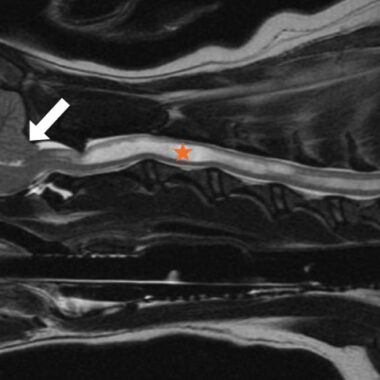 Patients affected with CMSM may experience significant morbidity, and their quality of life can be reduced. For most patients, initial therapy is medical management with the goal of a reduction in clinical signs associated with the disease, thus improving quality of life. Patients with severe disease or those that fail medical management should be evaluated as surgical candidates.

Medical management of CMSM primarily revolves around the treatment of NP and reduction of CSF production. In general, the most effective way to treat NP is with a multimodal or polypharmacy approach. Most of the drugs in TABLE 2 are used for the treatment of NP syndromes; both prednisone and omeprazole may aid in the reduction of CSF7 and thus may be of benefit for syringomyelia. 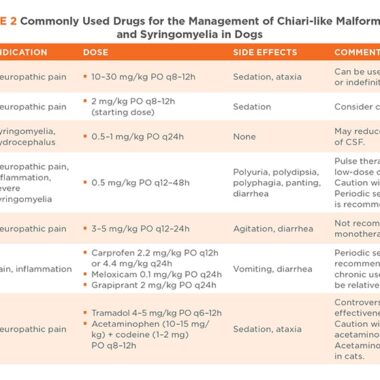 The severity of clinical signs can be variable; some patients that have minimal clinical signs, such as phantom scratching a few times per week with no vocalizations, may not necessarily require pain medication. Most patients show at least some improvement in NP with the addition of gabapentin8 or pregabalin. There is some controversy over the use of non-steroidal anti-inflammatory drugs (NSAIDs) for the treatment of NP; however, one study found that the combination of gabapentin with carprofen was superior to carprofen alone.8

Corticosteroids are useful in the treatment of CMSM and may be most effective in patients that are experiencing a more acute exacerbation of the disease. In the author’s experience, a short, anti-inflammatory dosing schedule of prednisone tapered down to the lowest effective dose is preferred; this can be repeated as necessary (pulse therapy).

Amantadine may enhance the effectiveness of gabapentin, NSAIDs, or opioids in the treatment of NP and should be considered as a component of polypharmacy in severe cases of CMSM9. TABLE 3 outlines recommendations for polypharmacy based on severity of clinical signs. 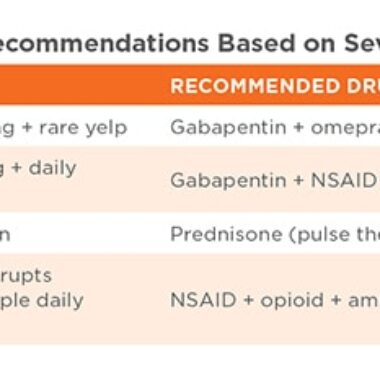 The two primary goals of surgery for CMSM are to (1) improve patient comfort and (2) slow or stop the progression of syringomyelia. Unfortunately, existing preoperative syringomyelia does not regress postoperatively; thus, it is unlikely that the preoperative level of NP (mainly in the form of phantom scratching) will completely resolve postoperatively without adjunctive medication.

Decompressive surgery for CMSM is known as a foramen magnum decompression (FMD), which is achieved by a suboccipital craniectomy, dorsal laminectomy (partial or complete) of C1, and durotomy over the atlanto-occipital region; some neurosurgeons also perform a concurrent duraplasty and/or cranioplasty.11 Studies have shown that 80% to 94% of patients exhibit early postoperative improvement following FMD; however, some patients show relapse of clinical signs approximately 1 year or more following surgery.12,13 Most patients experience little postoperative morbidity, and early surgical intervention has been recommended.

CMSM is a progressive disease of CKCS and other small-breed dogs causing NP and, in advanced stages, tetraparesis. The disease presentation can be challenging as the key components of the disorder may only be gleaned from a careful history or subtle examination findings. Phantom scratching and unprovoked vocalizations are the most common clinical signs reported by the pet owner. Definitive diagnosis is made using MRI of the brain and cervical spinal cord. The disease can be managed medically, usually with polypharmacy, for mild to moderate cases or surgically for more severely affected patients. Patients that ultimately require surgery have a better prognosis if treated earlier rather than in more advanced stages of disease.