Six months before presentation, Buster was presented to his primary veterinarian for polyuria, polydipsia, and weight loss. Physical examination and complete blood count (CBC) were unremarkable, while the serum biochemical profile (Table 1) demonstrated:

The urinalysis showed glucosuria, with no evidence of ketones, white blood cells, or bacteria. Based on these findings, Buster was diagnosed with diabetes mellitus. 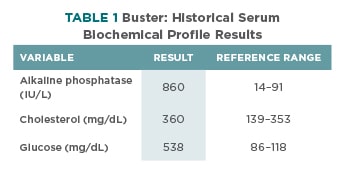 Upon presentation for a second opinion on diabetic control, Buster was receiving 30 U of NPH insulin q12h. The insulin was from a new prescription, stored in the refrigerator, and the administration technique (visualized as part of history collection) appeared appropriate.

Buster had no other known medical conditions and was not receiving any other drugs or supplements.

Buster was receiving a maintenance diet (daily requirements calculated at 700 calories/day; he was receiving approximately 800 calories/day), divided and fed in equal amounts roughly 10 to 12 hours apart. The diet and exercise pattern had been consistent since diagnosis.

Evaluating a poorly controlled diabetic animal can be frustrating for both the clinician and the owner.

A thorough history is key, including investigation into both the animal’s general history and specific questions related to diabetic history, such as initial diagnosis and management. When possible, available medical records should also be thoroughly reviewed.

Key points to any diabetic animal’s history include the following1,2: 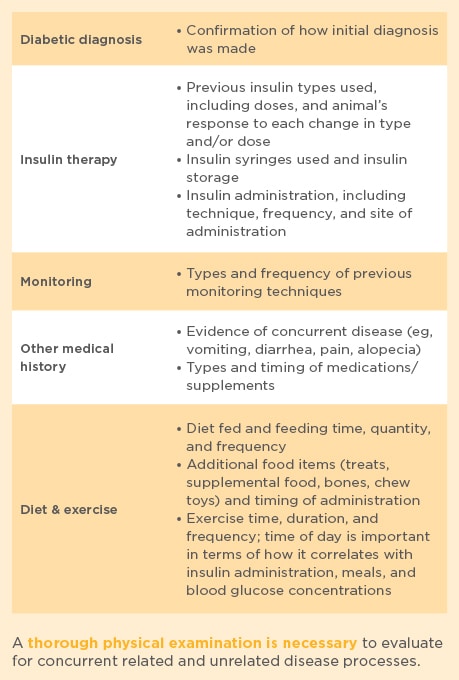 The owners noted that Buster was polyphagic, polyuric, and polydipsic, with no obvious improvement since initiation of insulin therapy. Buster had no recent vomiting, diarrhea, or alterations in appetite.

For a patient with uncontrolled diabetes mellitus, the goal of the diagnostic evaluation is to establish a problem list of conditions related and unrelated to the animal’s diabetes mellitus.

In addition, determine the suspected causes of poor diabetic control, which may include:

Buster’s problem list of conditions—both related and unrelated to his diabetes mellitus—included: 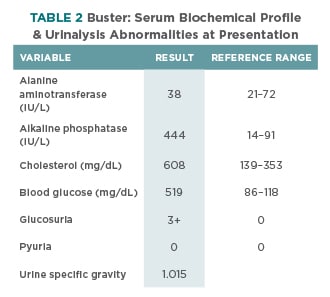 The patient was hospitalized in order to better assess diabetic control through serial blood glucose curves and monitoring.

Day 1: Blood glucose was assessed in-hospital on the night of admission (Table 3), before insulin administration. 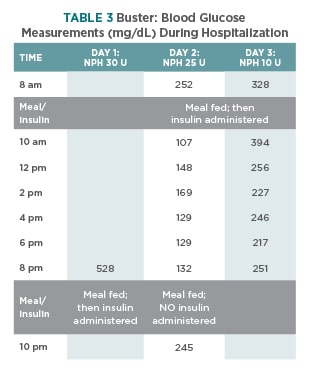 Day 2: Blood glucose monitoring began the next morning (Table 3). Because blood glucose was lower than anticipated at 8 am, Buster received 25 U of NPH insulin SC after a complete meal, with blood glucose measurements taken 2 hours later and then q2h.

Buster significantly responded to insulin while in the hospital, with a relatively low blood glucose at 8 pm. Buster was fed and no additional insulin was administered on Day 2. Blood glucose monitoring continued overnight until blood glucose was >200 mg/dL.

Day 3: Buster received 10 U of NPH insulin SC after a complete meal in the morning, with response monitored throughout the day (Table 3).

Key questions to ask when evaluating blood glucose curves include:

Clinicians must recognize the variability between blood glucose curves performed at home and those obtained in the hospital setting. Many owners may alter a pet’s daily routine (eg, feeding schedule, exercise) to accommodate the hospital visit. In addition, pets exhibiting fear or stress in a hospital setting are unlikely to be good candidates for in-hospital blood glucose curves. At-home blood glucose monitoring or other approaches (for example, continuous glucose monitors) must be considered.

On the basis of serial blood glucose curves and monitoring in the hospital, it was suspected that Buster was exhibiting clinical signs consistent with poor control caused by rebound hyperglycemia, also known as the Somogyi response.

This diagnosis was based on Buster’s clinical response (reduced clinical signs and increased body weight) and improved blood glucose values, both of which were associated with a significant reduction in insulin dose. See The Somogyi Response for further details on diagnosis of rebound hyperglycemia.

The specific criteria for a Somogyi response were not demonstrated on Buster’s blood glucose curves performed in the hospital. However, these criteria can be challenging to identify in hospital, and may not be identified at all because of:

In this dog, if the previous high insulin dose had been administered repeatedly, a Somogyi response with rebound hyperglycemia may have been documented in subsequent blood glucose curves.

Buster’s Day 3 dosage of NPH insulin (10 U SC q12h) was continued for 7 to 10 days, with a plan for the owner to return with Buster in 1 week for a blood glucose curve.

At Buster’s follow-up appointment, his clinical signs had improved but not resolved. A blood glucose curve was performed, revealing a nadir of 260 mg/dL at 4 pm. The insulin was effective, but the nadir was not ideal. Thus, the dose was increased to 12 U of NPH insulin SC q12h.

Additional follow-up showed that, with this dose, Buster’s clinical signs had resolved and his condition was controlled.

The Somogyi response, also called rebound hyperglycemia and insulin-induced hyperglycemia, is the physiologic response to impending hypoglycemia. This response is characterized by stimulation of hepatic gluconeogenesis and secretion of diabetogenic hormones, including catecholamines and glucagon.

Factors that may increase risk for the Somogyi response in dogs and cats include: 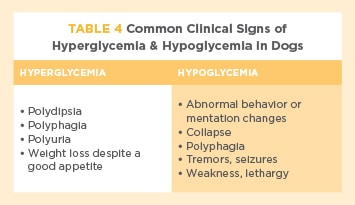 Rebound hyperglycemia is often between 400 and 800mg/dL. It is suspected that patients exhibit sustained hyperglycemia and insulin resistance (up to 24–72 H) after a hypoglycemic event.1,2,4

The Somogyi response should be suspected when:

Unstable diabetic animals can be a struggle to manage in clinical practice. Thorough communication with the owner and examination of the animal, along with careful monitoring, are the key to successfully stabilizing these animals. Making small, infrequent insulin dose changes and allowing time to assess the animal’s response are the best ways to prevent insulin overdose.

Ann Della Maggiore, DVM, DACVIM, serves as an assistant professor of clinical internal medicine at the University of California, Davis School of Veterinary Medicine, with a specific interest in small animal endocrinology. She received her veterinary degree from UC Davis, then completed a residency in small animal internal medicine at the same institution.