The first annual Today’s Veterinary Practice symposium—Insights from Experts—took place at the NAVC Conference 2016 in Orlando, Florida. This article reviews the information provided by Dr. Justine Lee and Dr. Garret Pachtinger in the session, Emergency Management of Hypoadrenocorticism. Stay tuned for more information on the 2017 NAVC Conference TVP symposium at tvpjournal.com and navc.com.

Lucky was presented to the emergency referral veterinary clinic because her primary care veterinarian was closed for the evening.

The owner reported that Lucky vomited in the car a week earlier when coming home from the groomer. Over the past week, Lucky’s appetite diminished but she seemed thirstier. Lucky had become progressively more lethargic and anorectic over the past 2 days.

Lucky was up-to-date on vaccines, receiving seasonal flea and tick medication and heartworm preventative, and healthy until a week ago.

The physical examination findings for Lucky upon presentation to the referral facility are listed in Table 1. Doppler blood pressure measurement revealed that Lucky’s systolic blood pressure was 80 mm Hg.

Due to the combination of Lucky’s dehydration and hypovolemia (based on poor pulse quality), a peripheral 18-gauge, 6-cm cephalic IV catheter was placed. A small amount of blood from the catheter hub was obtained for analysis of packed cell volume, total solids, blood urea nitrogen (Azostix, usa.healthcare.siemens.com), blood glucose, and venous blood gas/electrolytes. Laboratory results are listed in Table 2. 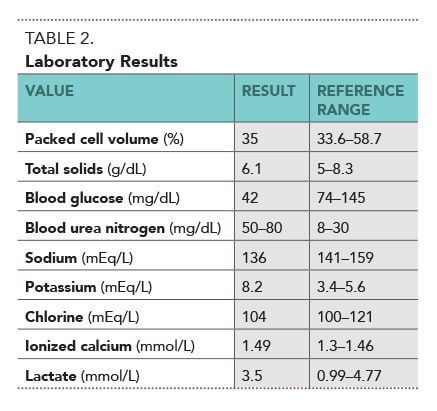 is a potentially life-threatening complication in a variety of conditions and, thus, emphasizes the importance of rapid evaluation and treatment.

Lucky’s sodium:potassium ratio was 16:1, which is most often seen in veterinary patients as a result of hypoadrenocorticism and mineralocorticoid deficiency. The hyperkalemia can potentially be life-threatening, resulting in severe arrhythmias. The hypoglycemia can result in clinical signs of weakness, tremors, vomiting, seizures, collapse, and death. Prompt treatment of the electrolyte abnormalities and hypoglycemia in this patient was imperative.

Hyperkalemia decreases resting potential, which makes it less negative and initially results in more hyperexcitable cells.7 To increase the normal threshold membrane potential, thereby normalizing the difference between the 2 potentials, a bolus of 50 mg/kg 10% calcium gluconate, delivered slowly over 15 minutes, was administered to Lucky.7

Alternatively, use of sodium bicarbonate or insulin:dextrose can be considered. Although calcium gluconate has the most rapid stabilizing effect in hyperkalemic patients, it does not address the hyperkalemia itself. Both sodium bicarbonate and insulin therapy result in a transient lowering of serum potassium, promoting its translocation from the extracellular to the intracellular fluid compartment (Figure 2).

Lucky received continuous ECG monitoring during calcium gluconate administration and until she was more cardiovascularly stable. It is important to remember that calcium gluconate does not directly affect potassium levels.

Lucky received an initial IV bolus of 0.5 g/kg dextrose (10 mL of 50% dextrose diluted in 20 mL of 0.9% saline) over 2 to 3 minutes to address the hypoglycemia. An additional bolus of 400 mL (20 mL/kg) of warmed lactated Ringer’s solution was administered over 15 minutes.

1. Replacement fluids: Lucky’s estimated dehydration was 5%. To correct this deficit over the next 8 hours, Lucky needed to receive fluids at a rate of 125 mL/H:

More information on the dosage of 50 mL Q 24 H can be found at aaha.org/public_documents/professional/guidelines/fluidtherapy_guidlines_toolkit.pdf. 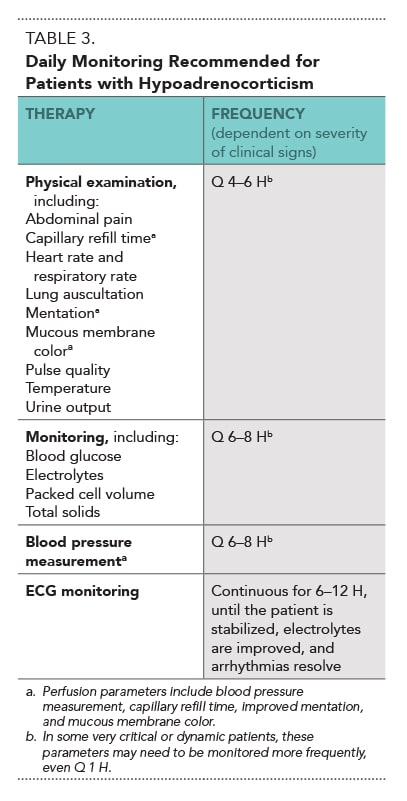 While the patient was stabilized, further diagnostics were pursued, including a complete blood count (CBC), serum biochemical profile, urinalysis (Table 4), and baseline and resting cortisol levels.

Based on the baseline cortisol and ACTH stimulation tests, all the clinicopathologic tests were consistent with a diagnosis of hypoadrenocorticism. Additional diagnostics may include fecal testing (to rule out whipworms) and advanced diagnostic imaging, such as ultrasound (to rule out signs and disease, such as gastrointestinal bleeding, ascites, and neoplasia).

Typical supportive therapies for the patient with hypoadrenocorticism include:8,9 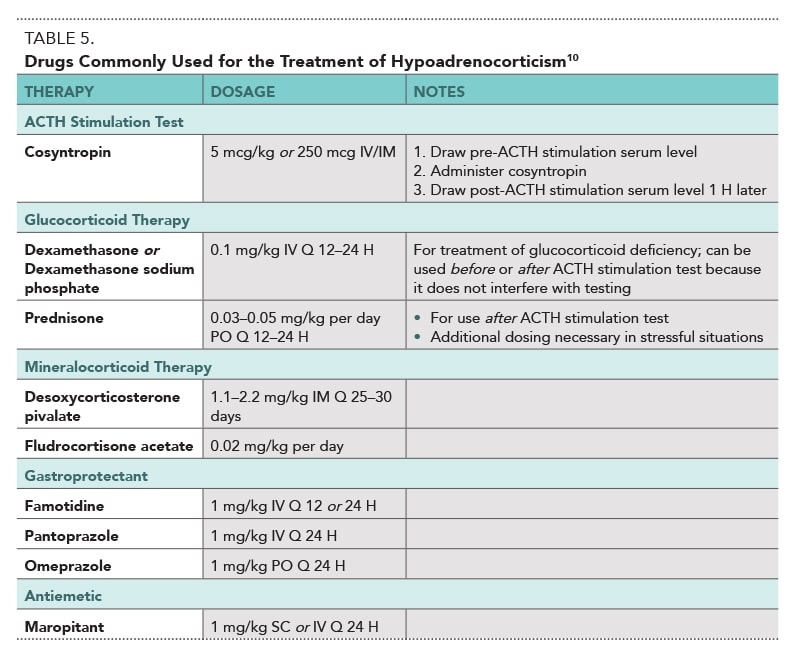 Lucky’s hydration and hypovolemic state improved with fluid therapy and her blood pressure returned to normal after 2 crystalloid boluses. Within 12 hours, Lucky was eating and drinking, and her electrolyte abnormalities had resolved.

Lucky was discharged the day after presentation—once she was appropriately hydrated, her electrolytes were corrected, and she was eating and drinking voluntarily.

Lucky’s owner was instructed on the long-term management of hypoadrenocorticism, taught how to administer medications (including extra dosing during stressful events), and counseled to follow up with the veterinarian for long-term mineralocorticoid management (eg, DOCP).

The primary care veterinarian performed a recheck examination 3 days after discharge and noted that the physical examination and electrolyte findings were normal; follow-up was scheduled for 3 weeks later to recheck electrolytes and administer DOCP (Table 6). 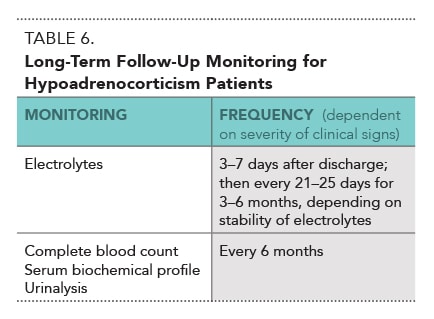 The owner was pleased with the outcome and rapid improvement in Lucky’s condition.

Other common laboratory abnormalities include azotemia, isosthenuria (from osmotic diuresis secondary to sodium losses), hypoglycemia (due to impaired gluconeogenesis), hypercalcemia (due to altered renal excretion, reduced gastrointestinal absorption, and decreased resorption of calcium from bone), hypoalbuminemia, and hypocholesterolemia.11,12

Treatment for the critically ill patient with hypoadrenocorticism should include symptomatic supportive care, aggressive fluid therapy, correction of electrolyte abnormalities and hypoglycemia, antiarrhythmic therapy (if needed), steroid administration, and mineralocorticoid supplementation, if needed. Appropriate use of steroids needs to be weighed so as not to impair diagnostic testing for baseline cortisol levels or for future ACTH stimulation tests.

While long-term management may be cumulatively expensive (eg, prednisone, periodic electrolyte monitoring, and mineralocorticoid supplementation), with medical management, the prognosis for hypoadrenocorticism is good to excellent. 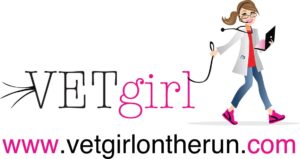 Are you a busy veterinary professional that is constantly on the run and experiencing “time poverty”? Join VETgirl, a subscription-based podcast and webinar service offering RACE-approved, online veterinary CE. Founded by Dr. Justine Lee and Dr. Garret Pachtinger, VETgirl offers clinically relevant, practical online veterinary CE for just $199/year. With a VETgirl ELITE subscription, you receive 40+ hours of CE, all provided by board-certified veterinary specialists and experts. Learn more at JoinVETgirl.com and use the discount code TVP2016 for a 10% discount.

Justine A. Lee, DVM, Diplomate ACVECC & ABT, is the CEO and founder of VETgirl (vetgirlontherun.com), a subscription-based podcast and webinar service that offers RACE-approved online veterinary continuing education. She recently received the NAVC Speaker of the Year Award (2011, 2015, 2016) and is the author and editor of several veterinary textbooks, book chapters, and scientific publications. She completed her veterinary training at Cornell University, Angell Animal Medical Center (Boston), and University of Pennsylvania.

Garret Pachtinger, VMD, Diplomate ACVECC, is the COO and co-founder of VETgirl (vetgirlontherun.com). He is also a criticalist at the Veterinary Specialty & Referral Center in Levittown, Pennsylvania. He completed his veterinary training at University of Pennsylvania.