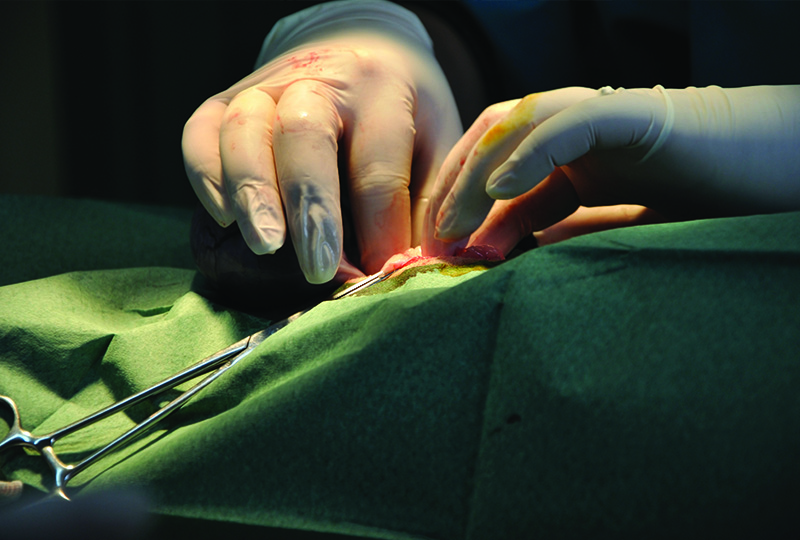 Certain binding, or friction, knots are highly useful in achieving consistently secure ligations, and ideal qualities of a first-throw friction knot include the ability to:

Very little information is available in the human and veterinary literature describing indications and contraindications for use of friction knots for ligation, and we could find no published, well-illustrated instructions on how to tie these knots. There is also considerable confusion regarding the descriptions on tying, and correct names for, these knots.1

The goal of this article series is to review principles surgeons use to achieve hemostasis on blood vessels (or pedicles) and factors related to ligation security, and provide step-by-step instructions on how to create friction knots.

Ligation is the act of placing a ligature, and a ligature has 2 components:

For surgery, ligatures are used to tightly occlude blood vessels.2,3 Ligation of solitary vessels, or multiple vessels within a pedicle (mass ligation), is used virtually daily in practice for ovariohysterectomy, castration, amputation, splenectomy, and lobectomy.

Despite the introduction of newer electrosealing devices4-6 for use in open and minimally invasive surgery involving large vessels, ligatures are still considered the gold standard method to achieve hemostasis. Therefore, creating secure ligations is one of the most critical steps in most soft tissue surgeries.

Generally speaking, it is good practice to choose the smallest suture material size that provides sufficient strength for the intended ligation.

Although many different suture materials can be used successfully to ligate a pedicle or critical blood vessel, many surgeons choose strong, absorbable monofilament material of 0 to 3-0 size for most small animal applications, such as the suture material listed in Table 1.2

Multifilament sutures, such as silk—a suture noted for its excellent handling and ligation qualities—can be used successfully for ligation, but:

Chromic catgut sutures have fallen out of favor for ligation because:

Therefore, if friction knots are used as part of ligature, chromic catgut is contraindicated due to the risk of excessive abrasion and fraying of the multifilament strands during tightening.

One of the most common, but dangerous ways, surgeons attempt to determine whether a ligation is leak-proof is to carefully and slowly release the clamps and any tension on the ligated pedicle; then watch to see whether bleeding occurs.

However, this method can be unsuccessful because:

Unfortunately, especially when the ligature knot crushes deep within the pedicle during tightening, it is quite difficult to know for sure that safe and permanent hemostasis has been achieved. Most seasoned surgeons have experienced a latent bleed after a splenectomy or lobectomy, even though there was absolutely no evidence of bleeding from any pedicle at the time of approach closure.

Seasoned, meticulous surgeons safely practice the principles of secure ligation (Table 2) rather than relying solely on whether the pedicle bleeds soon after the ligation is completed. 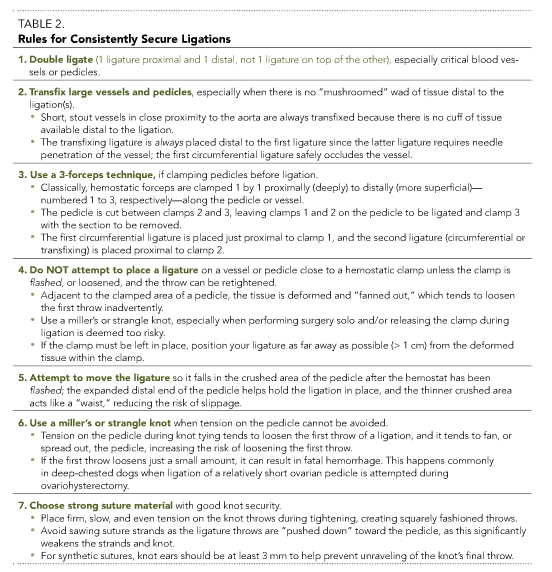 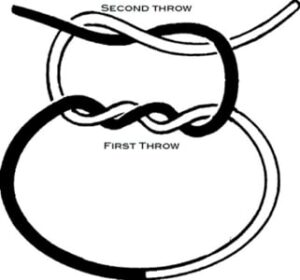 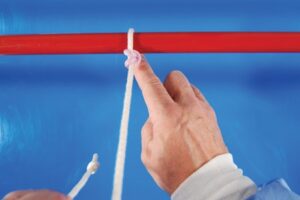 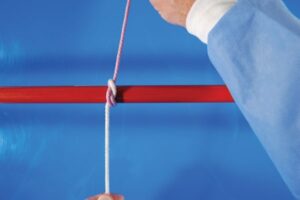 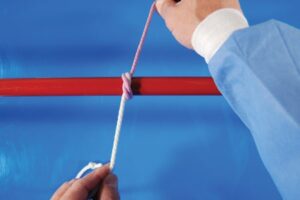 Binding knots, also called friction knots, are knots on a strand that either constrict a single object or hold multiple objects snugly together; the ends of the strands are either joined together or tucked under the turns of the knot. These knots are held in place by either:9

Whippings, seizings, and lashings serve a similar purpose to binding knots, but contain too many wraps to be properly called a knot.

Originally, these knots were designed for use by solo field workers to firmly close the end of burlap sacks. Binding knots were chosen because they would temporarily hold the neck of the sack tight without assistance until the knot was permanently secured with additional square throws.

Some of the more common friction knots used at that time were the miller’s, constrictor, strangle, double reverse half hitch, and surgeon’s knots.1,9

Why Not This Knot?

The surgeon’s throw can be used for ligation in practice, but it is generally NOT recommended for this use because:

Friction knots commonly employed in veterinary surgery can be classified by how many passes are placed around the pedicle.

Ideally, a tightly placed friction knot will remain tight around a pedicle until subsequent square throws are completed, and this permanently locks the tight ligature knot in place, safely maintaining hemostasis. In Part 2 of this article series, step-by-step instructions and images will provide guidance on how to tie surgical ligature friction knots.

Daniel D. Smeak, DVM, Diplomate ACVS, a soft tissue surgeon, is professor and Chief of Surgery and Oral Surgery at Colorado State University. He has written clinical and research articles, as well as textbook chapters on soft tissue surgery and core surgical skills instruction. His passion is teaching, and he is currently creating a complete set of interactive web-based core surgical skills modules to help train future veterinary students and practitioners around the world.

Kurtis M. Hazenfield, DVM, MS, is a surgeon at VCA Mission Animal Referral and Emergency Center in Mission, Kansas. His research on suture knot security was completed while serving as a chief resident in the Small Animal Surgery Section at Colorado State University. He has a passion for teaching, particularly surgical anatomy and basic surgical skills and principles. He received his MS in clinical sciences and surgery, and DVM at Colorado State University.

Local Anesthesia for the Distal Extremity