Dr. Kondert served as a Zoo and Exotic Medicine intern at the University of Georgia. Dr. Kondert received her DVM from the University of Veterinary Medicine in Vienna, Austria and successfully completed the ECVFG exam. She also completed one year of training in Zoological Pathology at the Research Institute of Wildlife Ecology and worked three years with small animals in private practice. Her research interests include small mammal medicine and surgery.

Joerg Mayer is associate professor in zoological medicine at the University of Georgia. He received his doctoral degree from the University of Budapest/Hungary; completed an internship in zoological medicine and surgery at the Roger Williams Park Zoo in Providence, Rhode Island; and completed a Master of Science degree in wild animal health from the Royal Veterinary College in London, England. He also served as a clinical associate professor and head of the clinical service for exotic animals for 10 years at Tufts University in Boston, Massachusetts. In 2013, he received the Exotic Speaker of the Year award by the NAVC. In 2016, he received the Oxbow/AEMV Exotic Mammal Health Award, an annual award to recognize excellence and innovation in the field of exotic mammal health

Distemper is an acute viral infectious disease with reported mortality rates in ferrets of 100%.1–5 Prevalence depends on the area, recent outbreaks have been documented in multiple countries.1,4 Since the invention of a vaccine against canine distemper virus (CDV) in the 1960s, the disease became uncommon in industrialized countries.1 Multiple different CDV vaccines have been used to prevent infections of distemper in ferrets since 1938.2 Currently there aren’t any studies available on the prevalence of distemper in the pet ferret population in the United States. If a patient is presented with neurological, gastrointestinal and respiratory signs distemper should be considered as a differential diagnosis.1 Early recognition and preventative vaccination are therefore imperative. No approved vaccine for ferrets was available in the U.S. market for a few years; therefore, some ferrets might not be up to date with their vaccination. CDV has a wide host range6 and unmonitored infections of the wildlife population are a potential threat to the pet ferret population (FIGURE 1). 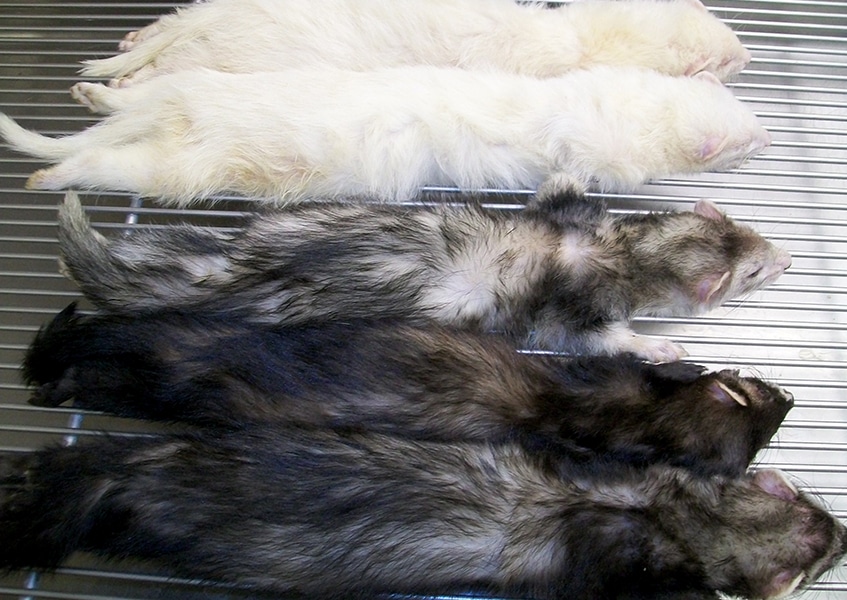 FIGURE 1. An outbreak of distemper in a ferret colony. Young animals are more susceptible than adults. Nonimmunized ferrets are at risk for disease if exposed to CDV-infected dogs or wild carnivores. Photo courtesy Dr. Jeff Baier.

Distemper is caused by a morbillivirus of the family Paramyxoviridae.6 The CDV has high mortality and morbidity and has been reported in dogs since its first description in the 17th century.7 Henri Carré first isolated the canine distemper virus in 1905.3 Slanetz and Smetana first reported an infection in a group of ferrets in 1937.2 Families of terrestrial carnivores are commonly affected, and members of the Canidae, Felidae, Hyaenidae, Mustelidae, Procyonidae, Ursidae, and Viverridae families have been reported to be infected with the virus.3

Several outbreaks of CDV infections in ferrets have been documented throughout the world over the past 10 years. In an outbreak of distemper in Spain in 2006, 14 domestic ferrets died.4 Three confirmed cases of CDV infections in ferrets that were euthanized in 2006, 2012, and 2013 were reported in New South Wales and the Australian Capital Territory.1 Two cases of distemper in domestic ferrets were reported in Germany in 2006.10 A major outbreak of distemper was reported in Denmark in 2012. Danish farmed mink (Neovison vison) were mainly affected. In a study of this outbreak, Trebbien showed that carnivores (foxes, raccoons, dogs, and ferrets) in that area affected by the disease died of CDV, showing an identity at the nucleotide level of 99.45% to 100%.9 In the United States, free-ranging raccoons (Procyon lotor) are the main species affected by CDV in wildlife, serving as a potential disease reservoir.3 A large outbreak of distemper in raccoons living around a large suburban zoo in the United States was reported in 2001.11

Infections caused by a morbillivirus are spread by aerosol transmission and show a highly contagious pattern. Contact with exudates (eg, conjunctival and nasal), urine, feces, and skin is often a source of transmission. The virus shows a strong affinity for epithelial cells and lymphoid tissue of the upper respiratory tract. This is where the first phase of viral replication occurs.6 Clinically, this phase is observed 3 to 6 days after infection. It is characterized by lymphopenia and pyrexia. The patient has viremia at this point, resulting in systemic infection of the lymphatic tissue. There is a strong correlation of immunosuppression and virulence. The fever is biphasic and recurs in the second phase of viremia a few days later. The systemic infection of the epithelial cells severely affects the patient, resulting in damage to the mucosal tissue. At this stage, patients show serous nasal discharge, conjunctivitis, and anorexia, clinically resembling an influenza infection (FIGURE 2). Dermatologic signs, including facial and perineal dermatitis, as well as dermatitis on the abdomen, completely resolve between 17 and 22 days after infection.12 The entire respiratory and gastrointestinal tract can be severely affected, and disturbance of the epithelial cell layer predisposes patients to secondary bacterial infections.6 Because of the clinical resemblance to influenza infectious, it is important to diagnose distemper early to avoid potential shedding of the virus and potential contamination of the clinic. 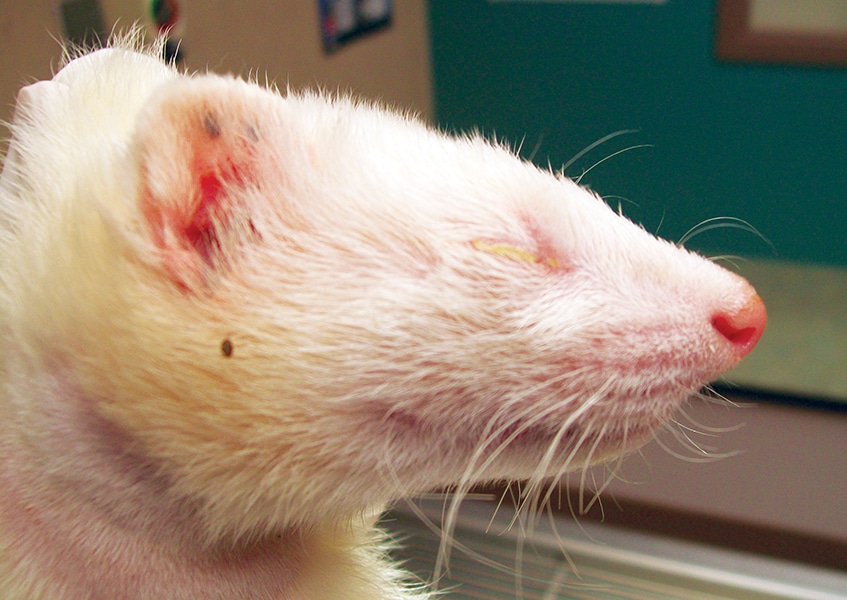 Neurologic signs resulting from acute encephalomyelitis have been described but are not always present in affected animals. Of note, during the previously mentioned 2006 outbreak in Spain, none of the affected animals showed any neurologic signs.4 Depending on the strain of the virus, patients may be moribund after 16 days of infection, a condition that justifies humane euthanasia or results in death. Dermatologic signs, such as hyperkeratosis of footpads or the nasal plane, as observed in canines, are rare (FIGURE 3).12 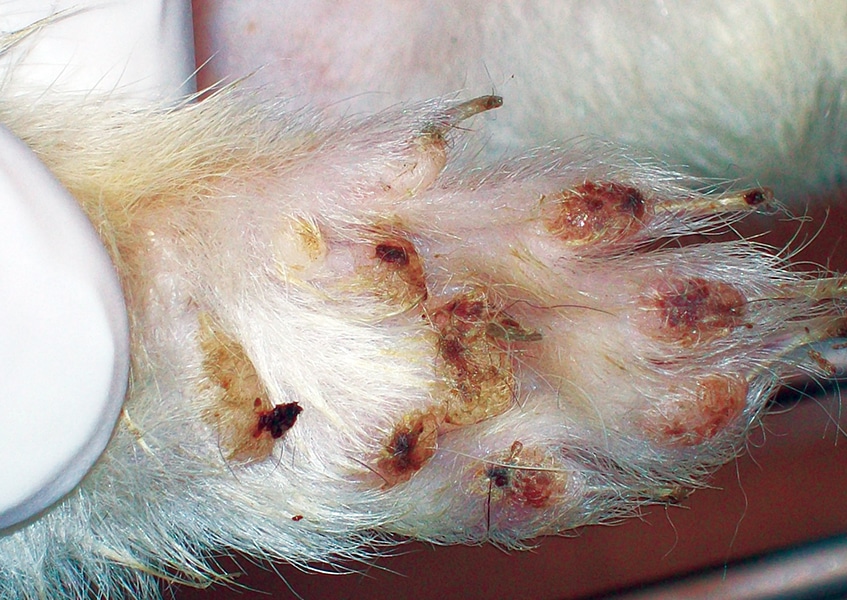 FIGURE 3. The hard pad lesions on affected ferrets are usually not as pronounced as those on dogs, most likely because of the rapid progression of the disease. Photo courtesy of Dr. Jeff Baier

Diagnosing distemper can be challenging and is based on history, clinical signs, and results of diagnostic tests. Abnormal hematologic findings consist of lymphopenia, thrombocytopenia, and regenerative anemia. In the early phase, distemper inclusions can be found in small numbers in circulating lymphocytes. Diagnostic imaging of the thorax shows an interstitial lung pattern in the initial phase. An alveolar lung pattern has been described with secondary bacterial infection.

Immunocytochemistry (fluorescent antibody testing) can be performed, and submitted samples should contain cells from the conjunctival, tonsillar, genital, and respiratory epithelia. This special stain can also be used on cells in cerebrospinal fluid, blood (buffy coat), urine sediment, and bone marrow. In the clinical setting, smears from the epithelial lining of various tissues can be examined for inclusions by using a microscope in the clinic as a quick screening test. Cerebrospinal fluid taps should be performed in patients with neurologic signs. Cytological changes depend on the stage of infection, and a false-negative result can always occur in the early stages of the disease.

Immunohistochemistry of tissue biopsies of the upper respiratory tract and the associated lymphatic system, as well as skin biopsies are diagnostic. Serum antibody titers can be evaluated by using a neutralization test. This is worth checking especially before an unapproved vaccine (in situations where no approved vaccine is available) is used in an animal that received multiple vaccines in the past.

Supportive care with IV fluids (6 ml/kg lactated Ringers solution IV) and antibiotics for secondary bacterial infections can be provided after culture and sensitivity testing. As the reported morality in ferrets is 100%1-5 humane euthanasia is recommended in diagnosed patients with severe clinical signs.12 Patients with a suspected infection should be quarantined and other unvaccinated exposed carnivores must be tested. Preventive vaccination is the most successful treatment of the disease.1 Currently, only Purevax Ferret Distemper Vaccine (Merial) is available for vaccination in ferrets in the United States. It is a lyophilized vaccine of a recombinant canarypox vector expressing HA and F glycoproteins of canine distemper virus. Merial recommends to give two subcutaneous injections of 1mL (1 dose) at 3 week intervals and revaccinate annually with a single 1mL dose.

Because of inadequate circulating maternal antibodies, young ferrets aged 6 to 12 weeks become susceptible to CDV.1 Purevax Ferret Distemper Vaccine (Merial) is approved for use in healthy ferrets starting at age 8 weeks. Vaccination should begin at age 6 to 8 weeks for kits, with booster vaccination provided every 3 to 4 weeks until age 14 weeks. Annual revaccination is recommended. A successful response to vaccination depends on the patient’s immune system. Measuring antibody titers before the annual booster vaccination can be performed is considered the gold standard,15 especially in ferrets with a history of vaccination reactions. A titer higher than 1:50 is currently considered high enough to provide immunity to CDV infection in ferrets.16 A study by Jensen showed that cell-mediated immunity and/or the capacity for rapidly regenerating humoral immunity must be factored in; these can protect the patient from infection even if serum antibody levels are below the threshold.5

Because of the high risk for ferrets to develop a vaccine reaction, if they are vaccinated with the standard CDV vaccine approved for dogs, it was not recommended for use in ferrets in the United States. In 1978, a fatal case of a vaccine-induced canine distemper virus infection was reported among 4 black-footed ferrets in South Dakota. Insufficient attenuation of the vaccine for this species was assumed to be the cause of death.13 A similar case was reported in 2 young kinkajous (Potos flavus) in 1981.14

Most adverse effects consisted of an anaphylactic reaction (FIGURE 4) within 5 to 25 minutes after vaccination.17 They are commonly described in ferrets vaccinated for distemper and in combination with rabies. We recommend using only 1 vaccine (either rabies or distemper) at a time to document which vaccine caused the reaction and to permit the filing of a report (fda.gov). Patients show clinical symptoms of an anaphylactic reaction, including generalized hyperemia, ptyalism, and vomiting. Therefore, observation of the patient for 60 minutes after vaccination is recommended. To prevent any liability issues, owners should be informed about potential risks of the vaccine before application.17 Emergency treatment with IV fluids (lactated Ringers solution, 10 mL/kg per hour), epinephrine (0.1 mL of a 1:1,000 solution SC)17, diphenhydramine (1 mg/kg SC, or 0.5mg/kg PO)17 and metoclopramide (3 mg/kg SC)18 is indicated. Supplemental oxygen and stabilization of body temperature should be provided in severe cases. 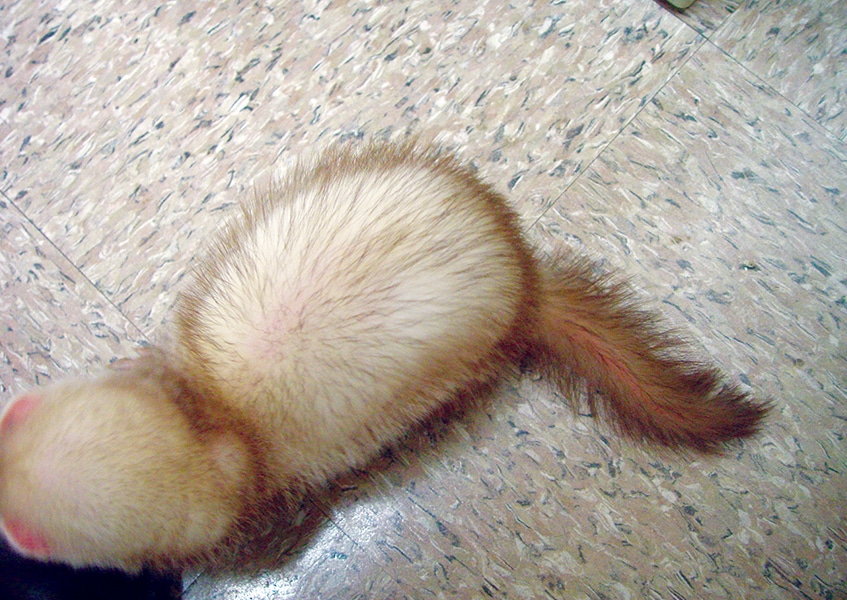 FIGURE 4. An early sign of an anaphylactic vaccine reaction in the ferret. Note the significant piloerection of hair on the body and the tail. Supportive care should be administered immediately.