Work is needed to better understand the most accurate and reliable protocol for heartworm diagnosis in this species.

Zaffarano is an Associate Clinical Professor in the Hixson-Lied Small Animal Center at the Iowa State College of Veterinary Medicine. There she serves as the primary clinician for all exotic companion animal pets and is the director of the Wildlife Care Clinic. Zaffarano has more than two decades of experience in exotic companion animal medicine, having owned her own clinic in Lexington, Kentucky, for many years. 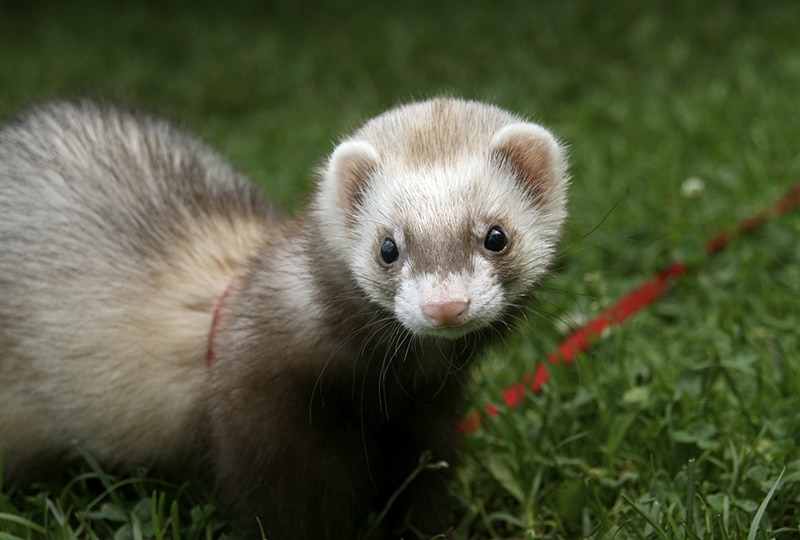 Ferrets (Mustela putorius furo) have been popular pets in the U.S. for decades. They have been domesticated since 4 BC, and have been used in a working capacity to wire American aircraft during World War II, connect wires for computers at the Peterson Air Force Base missile warning center, and clean 300-foot pipes in the Meson Laboratory (National Accelerator Laboratory, Batavia, Illinois).1

Ferrets are often housed in pairs or multiples, and it is common knowledge among ferret owners that ferrets should be vaccinated with rabies and distemper vaccines. However, not all ferret owners are aware that ferrets are also highly susceptible to heartworm infection.2-5

In ferrets, heartworm disease (HWD) is caused by Dirofilaria immitis and is transmitted by mosquitoes—the same way that HWD infects cats and dogs (Figure).

While earlier literature hypothesized that HWD in ferrets was similar to the disease in cats, the disease actually bears an interesting mix of similarities to both canine and feline disease (Table 1).3,4,6

Studies have shown ferrets to be highly susceptible to heartworm infection, with worm recovery rates similar to those of dogs,2,7 while microfilaremia appears to be transient and of low concentrations, as in cats. 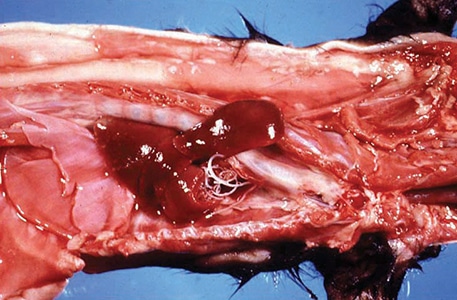 FIGURE. Necropsy of a ferret with heartworm disease.

Work is needed to better understand the most accurate and reliable protocol for heartworm diagnosis in ferrets. To date, substantive studies comparing the efficacy and accuracy of screening methods have not been performed in this species. Current best practices suggest employing a combination of testing methods to confirm HWD.

Due to the apparent transient nature of microfilaremia in ferrets, microfilaria detection is more problematic in ferrets than dogs; however, if found, it is diagnostic.

Combining heartworm antigen tests with imaging techniques, such as thoracic radiographs, echocardiography, and angiography (to detect adult heartworms in the heart and associated vessels), appears to yield a relatively high and accurate detection rate. False negative antigen tests are presumed to be due to antigenic loads below detectable levels—when lower worm burdens or single sex infections are present—similar to feline and canine infections.

Evidence of accuracy and efficacy of antibody testing in ferrets is lacking.

Clinical signs of HWD in ferrets are outlined in Table 2. Bilirubinuria is the clinicopathologic change detected most consistently in ferrets with HWD and, while more work is necessary to investigate this link, it may prove to be a consistent indicator for the disease.2,8,9 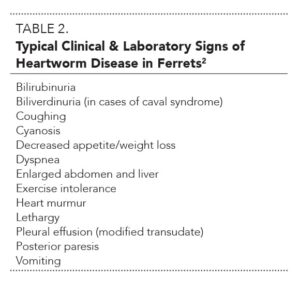 Treating ferrets with heartworms has proven problematic. As with cats, no treatment has been approved for HWD in ferrets; therefore, treatment options (Table 3) consist of extra-label protocols. 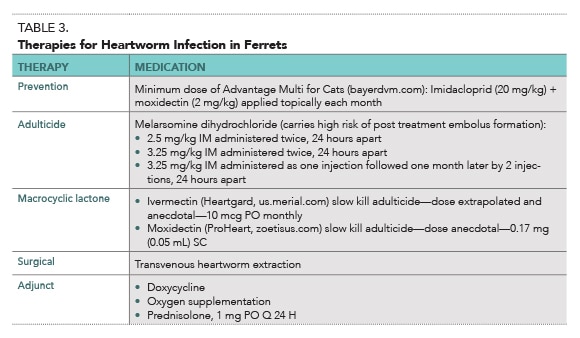 A study in which canine doses of melarsomine dihydrochloride (2.5 mg/kg) were administered intramuscularly 2 times, 24 hours apart, demonstrated approximately 70% efficacy in killing adult heartworms in ferrets.2 However, the treatment worsened both cardiac and respiratory signs in the ferrets.

Melarsomine administered intramuscularly to ferrets at a higher dose of 3.25 mg/kg was found to be equally effective (80.6%−83.3%) when administered either:2

Comparison of these 2 treatment methods was hindered by the small sample size, and statistical significance is difficult to confirm until a larger population is studied.

A small study of adulticides that compared administration of ivermectin (Heartgard, us.merial.com) alone to ivermectin in combination with melarsomine suggested that ferrets may have a higher survival rate when ivermectin is administered alone. However, this study’s small sample size makes the significance of mortality rates, survival times, and comorbid conditions difficult to interpret.2

Anecdotally, moxidectin (ProHeart, zoetisus.com) has been used at 0.17 mg/animal in a small number of heartworm antigen-positive ferrets, with evidence of the potential for higher survivability than traditional treatments with melarsomine or ivermectin.11 Controlled studies to date have not been performed to verify efficacy or safety.

One case of successful transvenous heartworm extraction in a ferret has been documented in the literature.8

Oxygen supplementation and use of prednisolone at 1 mg daily/ferret to decrease lung inflammation may be helpful in clinically affected ferrets.

In dogs, the heartworm treatment protocol recommended by the American Heartworm Society (AHS) includes treatment of Wolbachia species by administration of doxycycline, which blocks the pro-inflammatory effects that follow worm death and transmission of heartworms by reduction of circulating microfilariae. At this time, it is not known if doxycycline could play a role in treatment of heartworm infection in ferrets.

In the years preceding the development and testing of macrocyclic lactones for prevention of heartworm in ferrets, ivermectin, 10 mcg PO, was utilized by many practitioners and found to be highly protective when given on a monthly basis.

The recent licensure and approval of imidacloprid/moxidectin (Advantage Multi for Cats, bayerdvm.com), however, has afforded practitioners a scientifically proven and licensed product for ferret owners. This product should be administered monthly at the recommended minimum dose of imidacloprid, 9 mg/lb (20 mg/kg), and moxidectin, 0.9 mg/lb (2 mg/kg), by topical administration, regardless of indoor/outdoor status.

While no serious side effects were observed during the FDA studies of this product in ferrets, several possible adverse reactions were reported, including pruritus/scratching, scabbing, redness, stiffening of hair, inflammation at the treatment site, and lethargy; all of which resolved without treatment.

Just as in dogs and cats, monthly, year-round heartworm prevention is recommended for both indoor and outdoor ferrets housed in heartworm endemic areas due to their susceptibility to HWD.9 Mosquitoes are found inside homes wherever they exist, and are capable of surviving in microclimates throughout winter (eaves of houses, crawlspaces, etc).