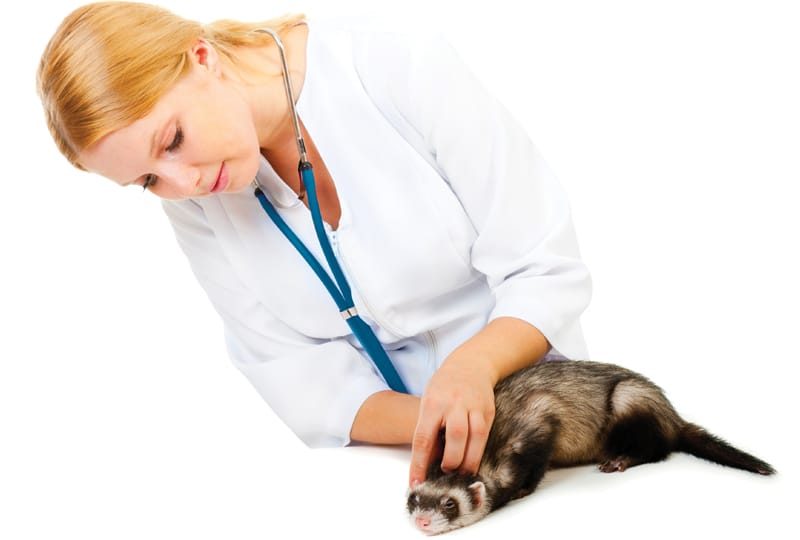 Ferret lymphosarcoma can occur anywhere in the body and clinical presentation and diagnostic results may vary, leading to incorrect diagnosis. A detailed review of the diagnostic approach to this common ferret disease is presented as well as the current challenges with regard to staging and grading for treatment and prognosis.

As one of the most common diseases of ferrets, we expect lymphoma to be easy to diagnose; yet it is a diagnostic challenge in many cases. It is tempting to compare the clinical presentation to that of dogs or cats, but in reality there are as many variations as there are similarities. This disease can occur anywhere in the body and clinical presentation and diagnostic results may vary, leading to an incorrect diagnosis.

The intent of this article is to identify common clinical features of ferrets with lymphoma and to aid practitioners in correctly diagnosing this disease.

Lymphoma in ferrets has a wide variety of clinical presentations.

More recent studies contradict some of these findings. Two recent retrospective studies found a lymphoblastic form of lymphoma occurring in ferrets of all ages.8,9 Lymphocytosis and peripheral lymphadenopathy were rare findings overall.9 This may represent a natural shift in the disease, population shift, regional variation, or many factors yet unidentified.Presence of blast cells in those studies was limited to juvenile ferrets.1,2,7

Regardless, at this time, age of ferrets at time of diagnosis can no longer be considered a reliable indicator of type or extent of disease, nor can it be a prognostic indicator.

Clinical signs of lymphoma in ferrets are nonspecific and usually related to the organ or system affected. Common clinical presentations include:

Some ferrets may have no clinical signs; in my practice, 24% of ferrets diagnosed with lymphoma have been asymptomatic.

Because lymphoma may occur in a single organ or multiple systems, physical examination findings vary greatly, depending on the location and extent of disease. Pale mucous membranes, weakness, abdominal masses, intestinal thickening, diarrhea, respiratory abnormalities, or other nonspecific signs may be present.

Cutaneous epitheliotropic lymphoma may present differently than other forms of lymphoma. There may be erythema and/or swelling of the feet. Although prognosis is good if solitary lesions can be excised, these more commonly occur as multiple lesions or diffuse disease of the feet, and therapy may be unrewarding.10,11

Anemia is the most common clinical abnormality identified with lymphoma.9 In one retrospective study, a total of 22/27 ferrets with lymphoma (81%) had some degree of anemia.

There is no consistent biochemical marker for lymphoma. Biochemical abnormalities are most often related to the organ system affected.

Bone marrow collection is indicated whenever there is an abnormality suggestive of lymphoma in the hematologic profile. Generally, this is in cases of lymphocytosis, leukopenia, or nonregenerative anemia of unclear etiology. Bone marrow can be collected in standard fashion from the humerus or femur, or a core bone biopsy can be obtained. This technique has been described in other literature.12,13

Radiography
Radiographic abnormalities that may lead the clinician to suspect lymphoma include:

However, because these findings may be caused by a variety of diseases, additional diagnostic sampling is indicated. While radiographs are necessary, they should be considered screening or supportive tests.

Ultrasonography may provide additional information and should be performed as part of the staging process. 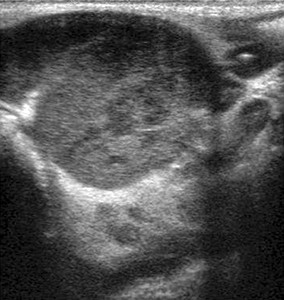 Figure 1. Ultrasound image of the spleen of a ferret with multifocal nodular hyperechoic and hypoechoic regions, showing infiltrative disease eventually diagnosed as lymphoma. 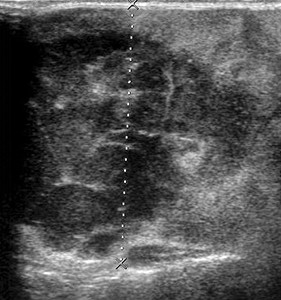 Advanced imaging, such as computed tomography and magnetic resonance imaging, may become more useful in identifying and staging lymphoma as they become more clinically available. These tools are the most reliable way to diagnose spinal and central nervous system lymphoma.15

Cytology or histopathology is the only definitive way to diagnose lymphoma.

Middle-aged to older ferrets are often prescribed prednisone or other steroid therapy for treatment of nonlymphomatous diseases. This may lead to difficulty in diagnosing lymphoma, as lymphocytes are highly responsive to steroids, which may mask evidence of the disease. In these cases, tissue sampling becomes even more crucial but more difficult to interpret.

These terms are frequently used by veterinary and human oncologists, but may be poorly understood by practitioners. They correlate tumor types with biological behaviors.16 Criteria for grade and stage may differ by tumor type, so the following definitions are not necessarily universal descriptive terms. Grading and staging are two very different but equally important pieces of information that can be used for evaluation of tumors.

Grade refers to a description of the tumor cell and is based on its microscopic appearance. Grading systems (or factors used to determine grade) are different for each tumor type, but all are evaluated upon characteristics/information, such as:

An example of grade would be “large cell lymphoma with intermediate mitotic index and round nucleoli.”

Stage refers to the extent or severity of the cancer. It typically is based on the location of the primary tumor and involvement of other sites, either regional or distant. There are several staging systems used in both human and veterinary medicine; however, it is difficult to fit all tumor types into a staging system. This is particularly true for lymphoma.

An example of stage would be “Stage II lymphoma–mediastinal,” which indicates involvement of multiple nodes on the same side of the diaphragm.

Stages of Lymphoma in Ferrets

There is no universal staging system specifically designed for ferrets. Table 1 is a proposed staging system based on the World Health Organization (WHO) staging system, which is also generally accepted by the American College of Veterinary Pathologists (ACVP).17

There is another staging system that is sometimes used in cats that may prove valuable as a secondary staging system for ferrets. It may add information or details when used in conjunction with the above system. This system is based on the anatomic sites of the disease and is outlined in Table 2.

Phenotype provides a description of the cell line of origin. For example, in lymphoma, this would classify the cells as either T-cell or B-cell in origin. This information is not included in descriptions provided by most pathologists, but can be easily identified by either immunohistochemical staining or flow cytometry.8,18 Clinicians can request this information from their pathologist, generally for a nominal charge. Information regarding phenotype is increasingly important and may be the most valuable prognostic indicator for ferrets. 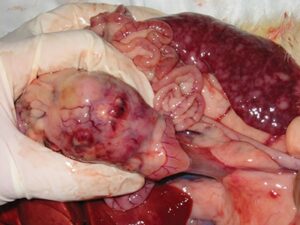 In ferrets, there is a lack of consistency in the literature regarding grade and stage. This makes comparing data extremely difficult. For example, although several retrospective studies discuss lymphoma in ferrets as small or large cell, their criteria for defining small versus large are not standardized, making it impossible to identify commonalities in tumor behavior or prognosis. As more diagnostic tools become readily available, we hope to identify commonalities in tumor type, which will ultimately lead to better treatment and prognosis for our patients.

Lymphoma in ferrets is a multicentric disease with variable clinical presentations. It can be difficult to identify because clinical signs are nonspecific.

Natalie Antinoff, DVM, Diplomate ABVP (Avian), practices at Gulf Coast Avian and Exotics, which she opened in 1997 as part of Gulf Coast Veterinary Specialists. The practice allows collaboration with many exotic pet specialists. She has authored chapters in several texts, lectures nationally and internationally, and is a consultant for the Veterinary Information Network Small Mammal Board. Dr. Antinoff received her DVM from University of Wisconsin–Madison; then she completed a small animal internship and residency in exotic pet medicine and surgery at The Animal Medical Center in New York City.