Microscopic evaluation of a blood film is required to not only verify analyzer results but to identify critical diagnostic features that analyzers cannot evaluate.

Leslie Sharkey, DVM, PhD, DACVP (Clinical Pathology), is a professor of clinical pathology in the University of Minnesota Veterinary Clinical Sciences Department, where she is Director of Clinical Pathology Laboratory. Her clinical interests include critical evaluation of the diagnostic application of testing. She is also involved in comparative and translational research, studying the long-term effects of chemotherapy and radiation in cancer survivors. Dr. Sharkey completed her DVM and post graduate training at Ohio State University and was on faculty at Tufts University before joining the faculty at Minnesota.

Daniel Heinrich, DVM, is a second-year resident in clinical pathology at University of Minnesota. Dr. Heinrich received his DVM from University of Wisconsin–Madison; completed a rotating small animal internship at VCA Veterinary Specialty Center of Seattle, Washington; and practiced at a small animal hospital in Chicago, Illinois, prior to his residency. His interests include diagnostic cytology, the scholarship of teaching and learning, and promotion of clinical pathology continuing education for general practitioners. He is currently completing research evaluating the use of the cell block method to diagnose causes of canine peripheral lymphadenopathy. 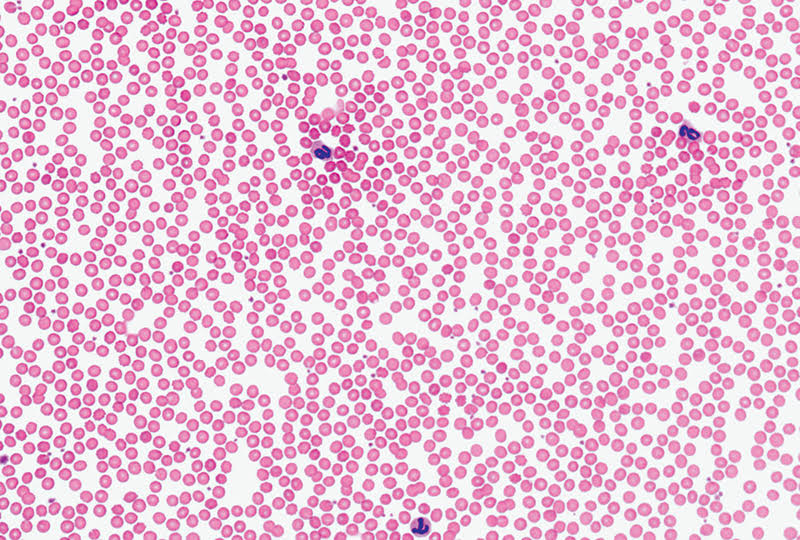 A complete blood count (CBC) is a critical component of the minimum laboratory database for evaluating veterinary patients. The proliferation of in-clinic analyzers facilitates rapid turnaround time that can improve patient care.

However, microscopic evaluation of a blood film is required to not only verify analyzer results but identify critical diagnostic features that analyzers cannot evaluate. Diagnostically essential morphologic abnormalities can be present even in patients with quantitatively normal results for all hematologic parameters.

Prepare blood films immediately after an atraumatic sample is collected to avoid the potential for pre-analytical error and in vitro artifacts. Hand dipping using well-maintained Diff-Quik type stains is used with success for in-house staining, with a limitation of poor staining of some mast cell granules. New methylene blue should be on hand for highlighting reticulocytes and Heinz bodies. In reference laboratories, automated stainers are often utilized for a slightly more complex process that enhances some cytologic features, such as chromatin patterns, for more advanced diagnostic evaluation.

Scan the smear at low magnification (10×), and be sure to: 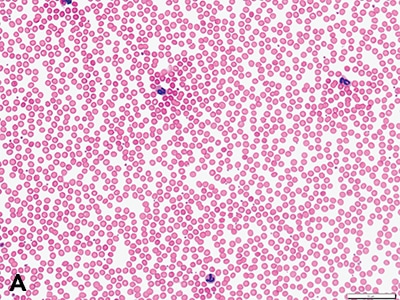 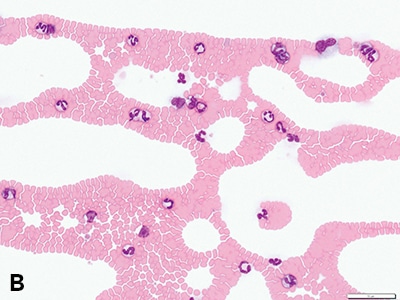 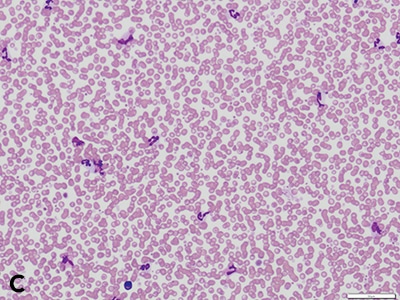 FIGURE 1. Low magnification canine blood film (200×, Wright-Giemsa stain) illustrating the counting area of the slide, which contains red blood cells (RBCs) in a monolayer with minimal overlap; leukocytes present are minimally distorted. The image is taken at 200× instead of 100× due to distortion caused by the microscope imaging program (A). Canine blood film at the feathered edge of the slide is too distorted to easily evaluate cell morphology. White blood cells (WBCs) can become distorted and RBCs can appear as spherocytes (B). Representative field of the body of a canine blood film, which is too thick to evaluate individual RBC and WBC morphology; RBCs are stacked on each other, with leukocytes compressed or distorted (C). 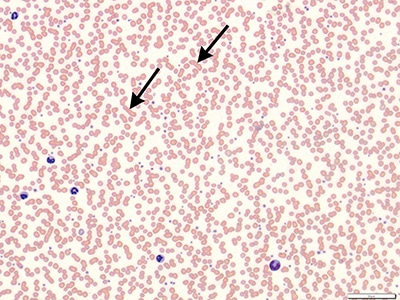 FIGURE 2. Feline blood film with rouleaux (arrows) present, which appear as stacked erythrocytes (similar to a column of coins); this amount of rouleaux is normal in cats. Wright-Giemsa stain; magnification, 200×. 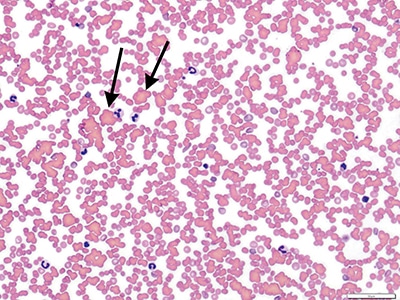 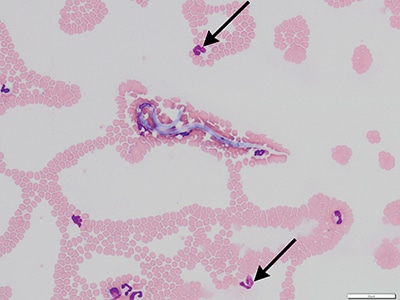 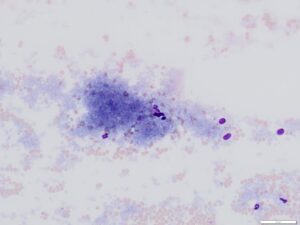 Numerous red blood cell (RBC) shape changes are described in textbooks, but clinicians should focus on identification and interpretation of the most diagnostically specific features that are occurring in significant numbers. These features are keys to screening for some of the most important red cell morphologic abnormalities, including:

Anisocytosis and polychromasia are indicative of regeneration. Reticulocyte counts are considered the reference standard for identification and quantitation of a regenerative response, but polychromasia can be used as an estimate, especially in dogs (Figure 6). A low level of polychromasia is normal.1

Spherocytes, in large numbers, suggest immune-mediated anemia, zinc toxicity, or bee envenomation. Spherocytes are characterized by loss of central pallor and increased cytoplasm density, and appear smaller than other red cells due to their shape change (Figure 6). They are easier to identify and more common in dogs than in cats, and their presence in small numbers is usually nonspecific. Always evaluate for evidence of agglutination (Figure 3) and, if absent, a Coombs test may be indicated.

Heinz bodies in larger numbers (up to 75% of RBCs) are observed in feline metabolic stress, such as diabetes mellitus, hepatic lipidosis, and other conditions, generally without significant hemolysis; however, in dogs, even small numbers of Heinz bodies are considered pathologic. Large Heinz bodies are relatively easy to identify as knob-like extensions emerging from the margin of red cells (Figure 7), but smaller Heinz bodies can be difficult to identify and may appear as small refractile areas of cytoplasm. Staining with new methylene blue can highlight smaller Heinz bodies, as well as identify reticulocytes using a manual method.

Heinz bodies form as the result of oxidative damage and can be important indicators of exposure to toxic amounts of acetaminophen, zinc, onions, garlic, and leeks, among other toxic substances. A careful history that evaluates potential exposure is critical, and radiographs to identify metal foreign bodies may be indicated. Eccentrocytes—red cells with hemoglobin that has pulled away from the cell membrane—also indicate oxidative damage and may accompany Heinz bodies (Figure 8).

Schistocytes, in large numbers, are often reflective of vascular pathology, including potential for disseminated intravascular coagulation and hemangiosarcoma. These fragmented erythrocytes, which can occur nonspecifically in small numbers, are also associated with fragmentation anemia (Figure 9).

Echinocytes are often associated with drying artifact or electrolyte abnormalities. These cells have numerous, even sharp, cytoplasmic projections. They may be present in large numbers, but are not critical from a diagnostic perspective (Figure 7).

Nucleated RBC precursors are released from the marrow as part of a regenerative process, but may also signal endothelial damage (ie, sepsis, thermal), lead toxicity, architectural disruption of hematopoietic organs (eg, spleen), or hematopoietic neoplasia (Figure 11). Large numbers—in the absence of a regenerative response or obvious sepsis or hyperthermia—indicate that a pathologist should evaluate the blood film. Typically, these are metarubricytes, though earlier precursors can sometimes be observed.

Inclusions that may be present: 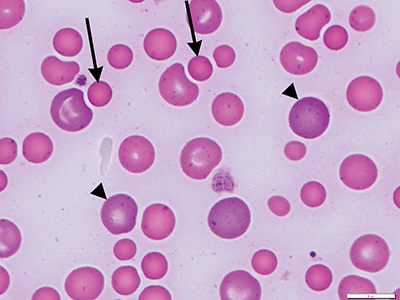 FIGURE 6. RBC morphology: Note anisocytosis due to presence of spherocytes (arrows) and polychromatophils (arrowheads). Normal erythrocytes have eosinophilic cytoplasm and central pallor. Spherocytes appear smaller, darker, and lack the central pallor typically noted in RBCs. Spherocytes can be difficult to identify in feline patients because their RBCs generally lack central pallor. Additionally, in some instances, all RBCs present appear as spherocytes in dogs, which makes identification difficult since typical RBCs are not present for comparison. Polychromatophils appear more basophilic and are frequently larger than typical RBCs. Wright-Giemsa stain; magnification, 1000×. 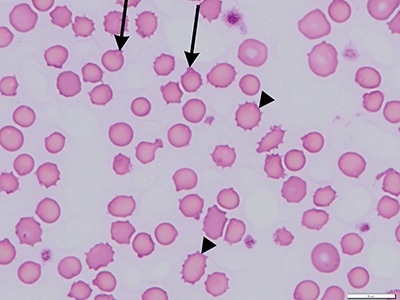 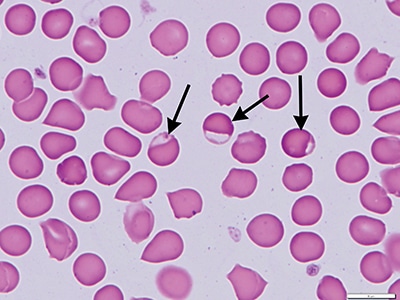 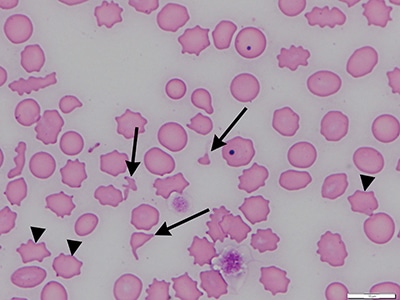 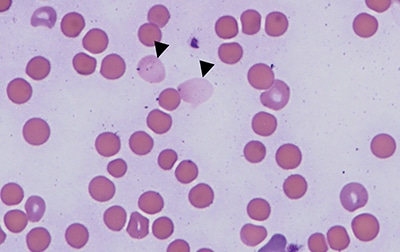 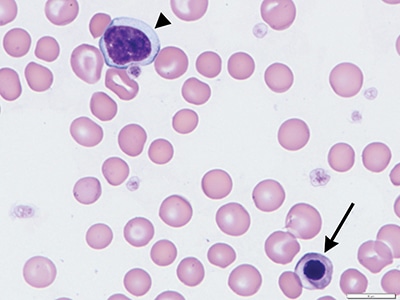 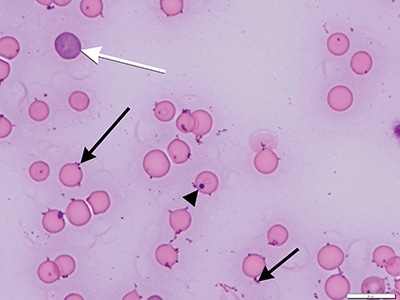 FIGURE 12. Numerous small, basophilic, Mycoplasma organisms (black arrows) on the periphery of RBCs and free in the background; a single Howell-Jolly body (arrowhead) is also present, which is much larger and more basophilic than Mycoplasma organisms. Note the single polychromatophil (white arrow) and ghost cell. Wright-Giemsa stain; magnification, 1000×. 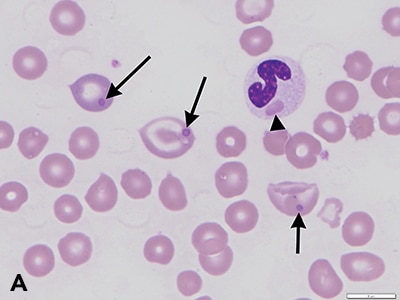 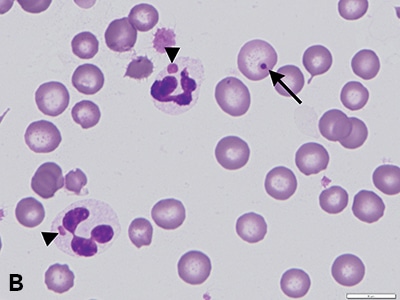 View images of normal leukocyte morphology by visiting the American Society for Veterinary Clinical Pathology’s website (asvcp.org): Click on the Students/Residents tab and select “Download Visual Hematology Guide — Leukocytes as a PDF file” from the new page that opens.

Morphologic observations of white blood cells (WBCs) are made while performing a 100-cell differential cell count at high magnification within the counting area.

Toxic change of neutrophils is a common and diagnostically critical morphologic abnormality indicative of inflammation that may be observed even with normal cell counts (Figure 14). Common components include cytoplasmic basophilia, vacuolization, and presence of Döhle bodies—small irregular inclusions that, in small numbers, can be present in healthy cats.

Reactive lymphocytes are nonspecific indicators of antigenic stimulation. They are characterized by a slightly larger size (in some cases, approximately the size of a neutrophil), increased amounts of cytoplasm that can have enhanced cytoplasmic basophilia, prominent perinuclear clear zone, a few small clear punctate vacuoles, and/or small magenta granules (Figure 16); nucleoli should not be present.

WBC inclusions may indicate an infectious agent. Distemper inclusion bodies can be visualized in leukocytes and erythrocytes (Figure 13); other relevant infectious agents include tick-borne diseases caused by Anaplasma species (Figure 17). Rarely bacteria can be seen within neutrophils or monocytes in septic patients.

High power examination of the feathered edge is recommended to optimize identification of infectious agents. Although leukocyte morphology is often distorted, the concentration of cells usually allows visualization of rare agents. Infectious agents can be identified in patients with quantitatively normal CBC results.

Lymphoblasts (Figure 18), mast cells (Figure 19), and malignant histiocytes are abnormal cells seen with some frequency but not specifically identified by analyzers. 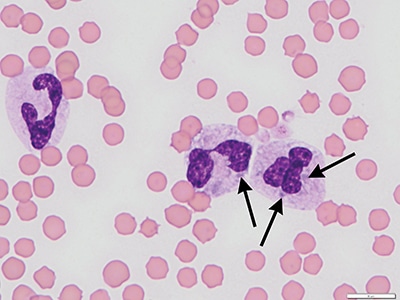 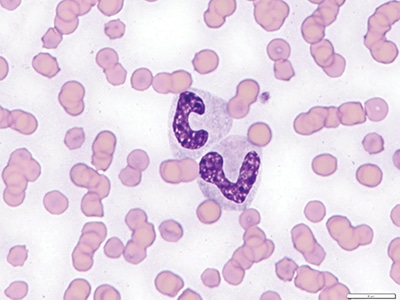 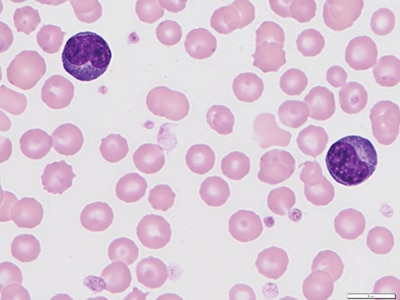 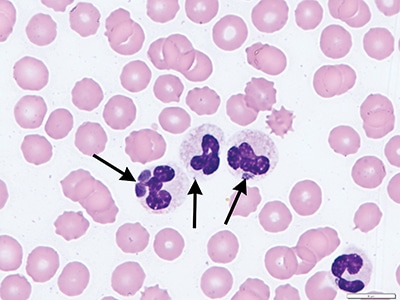 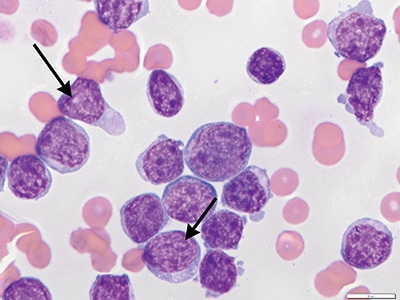 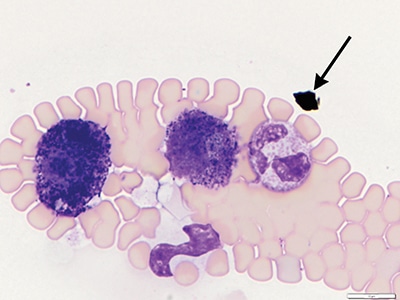 Identification of platelet clumps, including visual estimation by examination of a blood film, is essential to verify the accuracy of automated platelet counts because technical problems can interfere with accurate platelet counting.

Regenerative anemia in the absence of clinical evidence of hemorrhage should prompt careful evaluation of red cell morphology for causes of hemolysis. There is a tendency to presume that hemolysis is the result of immune-mediated hemolytic anemia in dogs, which causes clinicians to overlook less common, but important and treatable, causes that are identified with blood film review, such as zinc toxicity and oxidative and Heinz body anemias (induced by, for example, onions, garlic, leeks, skunk musk, and RBC parasites). Inflammatory leukograms often accompany hemolytic anemia, and platelet numbers should be scrutinized to identify concurrent immune-mediated thrombocytopenia or the potential for disseminated intravascular coagulation.

While mild nonregenerative anemia is frequently a nonspecific response to chronic disease, more severe nonregenerative anemia can indicate bone marrow disease. In addition to evaluating the patient for other cytopenias, it is important to examine the blood film carefully for morphologically abnormal cells that may signal malignancy.

Patients with significant inflammation and circulating neoplastic cells may have normal total white cell counts, and automated analyzers perform poorly when identifying morphologic abnormalities. Be sure to avoid the pitfall of assuming normal numbers equate with normal cells and look carefully for:

Following the guidelines outlined in this article will ensure that in-clinic hematology is a safe and effective tool in your practice.

Responding to a Cardiac Emergency: Pericardial Effusion in Canine Patients