The mainstay of treating acute pancreatitis in a dog is supportive care, including fluid therapy and nutritional management.

Acute inflammation of the pancreas is associated with abdominal pain. Depending on its severity, it may also be associated with mild, nonspecific, self-limiting clinical signs, or signs referable to cardiovascular shock, disseminated intravascular coagulation (DIC), or multiorgan failure. For an overview of the pathogenesis and diagnosis of acute pancreatitis in dogs, please see “Diagnosis of Acute Pancreatitis in Dogs” in the January/February 2020 issue.

Given that the pathogenesis of acute pancreatitis in dogs is a complex, self-perpetuating, autodigestive process, it is difficult to predict whether patients will have mild or rapidly progressive disease. Patients with subclinical and milder forms of pancreatitis may display mild, nonspecific clinical signs such as lethargy and intermittent anorexia, and often the diagnosis in these patients is missed. When pancreatitis is suspected, these patients are often treated as outpatients with antiemetics (e.g., maropitant), subcutaneous fluids, and a low-fat diet. More severe forms of pancreatitis require aggressive supportive care and intensive hospitalization, with treatment including analgesia, nutritional management, antiemetics, gastrointestinal acid suppression, and correction of fluid, electrolyte, and acid-base abnormalities.

This article addresses the major aspects of management of severe acute pancreatitis in dogs. Recommendations are based on published supporting evidence when such evidence exists; however, when objective data to support current recommendations are lacking, they are based on published standard of care guidelines, anecdotal evidence, and clinical experience.

Dogs with pancreatitis have local and visceral pain. Pain scoring systems are routinely used to assess the severity of pain and determine analgesic plans; however, analgesic agents have not been evaluated in dogs with acute pancreatitis.1

At the author’s institution, a multifaceted, individualized approach to analgesia is based on the patient’s level of pain as determined by the use of behavioral and physiologic pain scoring systems.2 The initial choice of analgesic agent is an opioid (full or partial µ agonist). Then, depending on the severity of pain, an NMDA (N-methyl-D-aspartate) antagonist (e.g., ketamine) and/or a local anesthetic agent (e.g., lidocaine) may be added adjunctively as intravenous constant-rate infusions.

Ketamine is the first choice when animals continue to be subjectively unsettled or look uncomfortable after opioid administration. Signs of continued pain may include vocalization/crying, failure to respond or interact with people, and guarding, vocalizing, or pulling away when the abdomen is palpated. Ketamine plays a role in reduction of central sensitization and may help reduce nociception from intra-abdominal organs and visceral peritoneum.1

For animals with continued refractory behavioral and physiologic signs of pain, lidocaine may be added to the medical therapy (TABLE 1). Lidocaine not only exerts analgesic effects, but also has been shown to improve gastrointestinal function and have anti-inflammatory properties.1 Once patients are eating, they are usually transitioned to oral medications like tramadol and/or gabapentin (TABLE 1). Nonsteroidal anti-inflammatory drugs (NSAIDs) are not recommended owing to the presence of hypovolemia and dehydration in most dogs with severe acute pancreatitis.1 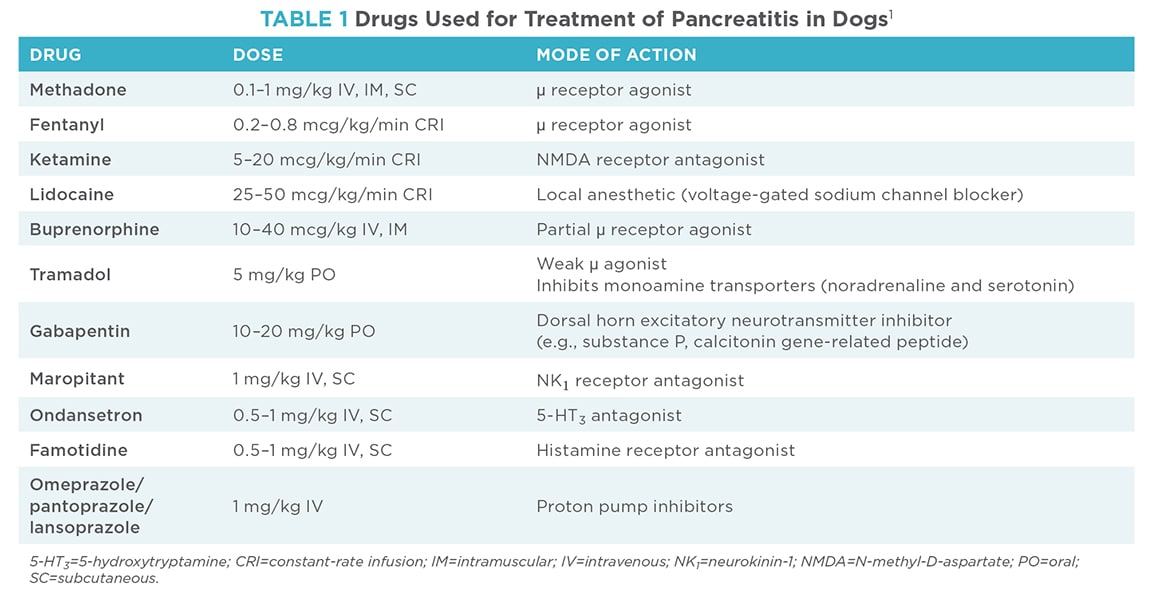 Nutritional Management of Pancreatitis in Dogs

Historically, it has been advocated to “rest” the pancreas during bouts of acute pancreatitis by withholding enteral nutrition to avoid stimulation of the exocrine pancreas and the risk for continued premature zymogen activation.3-6 Supporting evidence for this practice is minimal, and several studies challenge it.6 Evidence is mounting that early enteral nutrition improves clinical outcomes in systemically ill patients.3,4,7,8 Specifically, early enteral nutrition has been shown to decrease ileus and inflammation, stimulate intestinal mucosal regeneration and mucosal blood flow, decrease protein catabolism, and prevent protein-energy malnutrition.4,6,9 A recent retrospective study of 34 dogs with acute pancreatitis concluded that early enteral nutrition (i.e., within 48 hours of hospitalization) had a positive effect on return to voluntary food intake, was associated with less gastrointestinal intolerance, and should be considered as part of medical management.4

Imposed anorexia may be counterproductive to overall gastrointestinal health, as avoidance of enteral nutrition has been correlated with increased gastrointestinal permeability, bacterial or endotoxin translocation, and immunosuppression.3,6,10 Increased metabolic demands, protein catabolism, and bacterial translocation associated with pancreatitis itself may lead to systemic inflammatory response syndrome (SIRS).10

At the author’s hospital, nasoesophageal and nasogastric tubes are often used in management of patients with acute pancreatitis. Placement of a feeding tube is relatively inexpensive and generally well tolerated. Syringe feeding is not recommended based on its practical inability to deliver full nutrient requirements and the risk of food aversion and aspiration.5

Ideally, hospitalized dogs should be fed their estimated resting energy requirement (RER) based on either 70 × (body weight in kg)0.75 = RER (kcal/day) or [30 × (body weight in kg)] + 70 = RER (kcal/day). The first formula is the more accurate of the two and is used at the author’s institution for dogs weighing <5 kg or >25 kg, while the second is an approximation of RER for dogs weighing 5 to 25 kg.1,5 In patients that cannot tolerate their full RER as enteral nutrition, providing at least part of the RER via this route will likely provide some benefit in maintaining the absorptive surface area of the intestines.5

Liquid enteral diets designed for veterinary use are available (TABLE 2). Human enteral diets may be used for short-term feeding, but their lower fat, protein, and essential nutrient profiles make them inappropriate for long-term use.5

Vomiting and nausea-associated inappetence are common in patients with acute pancreatitis, and antiemetics are commonly used for their management. These signs are likely to be mediated centrally by circulating emetic agents and peripherally by ileus, peritonitis, and pancreatic destruction.3 Several antiemetics are routinely used for management and are considered effective and useful, although few have been subjected to rigorous testing;11 common choices are listed in TABLE 1.

Maropitant, an NK₁ (neurokinin-1) receptor antagonist, is a first-line antiemetic that acts both centrally (i.e., chemoreceptor trigger zone and vomiting center) and peripherally (gastrointestinal tract).1,3,12,13 Maropitant has been found to be superior to metoclopramide for management of peripherally stimulated vomiting.13 Rodent studies have suggested that, in addition to its antiemetic action, maropitant may inhibit inflammation by blocking NK₁ receptors in the pancreas.12,14 Other antiemetic agents with proposed anti-inflammatory activity, such as serotonergic antagonists (e.g., ondansetron), can be added as necessary to improve nausea and control emesis.1

At the author’s institution, maropitant is the preferred antiemetic. For dogs that are refractory to this medication, metoclopramide (1 to 2 mg/kg q24h as a constant-rate infusion) or ondansetron (0.1 to 1.0 mg/kg q6h to q12h) is used as additional supportive therapy.

The rationale for intravenous fluid therapy is to replenish blood volume and thus blood flow to the pancreas, with several animal studies demonstrating both improved pancreatic circulation and survival with fluid resuscitation.20,21 However, pancreatic blood flow and oxygen consumption are not completely restored with fluid resuscitation alone.21 Little information is available pertaining to the best initial fluid choice; however, an isotonic fluid (e.g., lactated Ringer’s solution, 0.9% sodium chloride) is appropriate. The fluid plan should incorporate the estimated fluid deficit, any ongoing losses (i.e., vomiting, diarrhea), and the ongoing maintenance requirement. Electrolytes should be monitored and supplemented accordingly.

Crystalloid therapy alone may not be adequate in dogs with severe acute pancreatitis.3 Colloid fluid administration has been studied in people with pancreatitis, with improved outcomes found compared with crystalloid resuscitation.19 The current role of colloid solutions in pancreatitis management in veterinary patients is controversial. Several human studies and a recent veterinary study have suggested that there is an increased risk of renal dysfunction, coagulation/platelet dysfunction, and mortality with the use of colloids.22-24 Additional prospective longitudinal studies in veterinary medicine are warranted to investigate the increased risks (e.g., acute kidney injury) associated with colloid administration in critically ill patients.

Other Therapies for Pancreatitis in Dogs

There is also little information regarding the use of plasma in acute pancreatitis. Purported benefits of plasma transfusions include correction of hypoalbuminemia and replacement of circulating antiproteases (e.g., α-macroglobulins, antitrypsins), coagulation factors, and anti-inflammatory factors.1,3,25 A single retrospective study reported the use of plasma in 77 dogs with acute pancreatitis over a 10-year period.25 The study concluded that there was no benefit to administration of fresh frozen plasma and that until further evidence is published, plasma transfusions should be reserved for pancreatitis patients with documented coagulopathies. Studies of the use of other blood products in these patients are lacking.

Glucocorticoids counteract nearly all pathways of inflammation.26 In pancreatitis, they have been shown to enhance apoptosis and increase the production of pancreatitis-associated proteins, which confer a protective effect against pancreatic inflammation.3,26 A recent clinical study demonstrated that dogs receiving prednisolone 1 mg/kg/day had a greater decrease in C-reactive protein concentration, fewer days until clinical improvement, shorter hospitalization periods, and better survival.26 Conclusions from these studies should be viewed with caution and other facets of aggressive medical management of pancreatitis should be maximized before the implementation of glucocorticoid therapy. Further objective clinical trials are needed to confirm findings from the most recent studies.

Antibiotic treatment for acute pancreatitis is not recommended, as pancreatitis is considered to be a sterile inflammatory process that is often accompanied by pyrexia and leukocytosis.1 Indications for the use of antibiotics include failure to respond to aggressive supportive care, pancreatic necrosis with secondary infection/abscessation, or melena and hematochezia suspected to be caused by bacterial translocation from the small intestine.1,27 When indicated, broad-spectrum parenteral antibiotics that are effective against gastrointestinal pathogens (e.g., amoxicillin-clavulanate) should be considered.1

Surgical management of severe acute pancreatitis may be necessary when there are persistent evidence of biliary obstruction, failure to respond to aggressive medical management, persistent distant organ complications, or pancreatic abscessation or evidence of infection.28-31 The goal of surgery is to relieve the persistent extrahepatic biliary duct obstruction via cholecystoenterostomy or choledochal tube stenting and resect diseased/devitalized or abscessed tissue. Survival rates for dogs requiring pancreatic resection for pancreatic abscessation are 0% to 56%; for dogs undergoing correction of extrahepatic bile duct obstruction, they are 50% to 80.8%.1,28-30 Cellulitis and septic peritonitis are the most common postoperative complications.28

Prognosis for Dogs With Pancreatitis

Once dogs are eating well and are clinically stable (i.e., no evidence of lethargy, vomiting, hyporexia) they can be discharged from the hospital.36 At the author’s hospital, oral analgesics (e.g., tramadol, gabapentin) are prescribed for patients being discharged with continued mild abdominal discomfort.

Dietary modification is the most important component in the long-term management of dogs with acute pancreatitis. High-fat diets, abrupt changes in food type and composition, and access to trash or table scraps should be avoided.5,37 It is generally accepted that the fat content of diets should be <30 g/1000 kcal.5 Hyperlipidemic dogs should be fed 14 g of fat per 1000 calories to achieve lower serum triglycerides and cholesterol.5

Diabetes mellitus is a commonly recognized comorbidity in patients with pancreatitis, with β cells likely succumbing to “bystander damage” either from nonspecific inflammation or the triggering of an autoimmune process.42 However, an underlying question remains: “Does canine pancreatitis cause diabetes mellitus or can diabetes mellitus result in pancreatitis?” The exact cause and effect has not been elucidated, with both diseases possibly exacerbating each other.37,42,43

Dogs that develop diabetes mellitus or EPI should be treated by the administration of exogenous insulin with lifestyle recommendations and dietary management or by adding a pancreatic enzyme preparation to food and supplementing with parenteral cobalamin, respectively.36

5. Shmalberg J. To feed or not to feed? Controversies in the nutritional management of pancreatitis. Todays Vet Pract 2016;6(6):45-51.