Welcome to our series of articles on small animal abdominal ultrasonography. The initial articles provided an overview of basic ultrasonography principles and a discussion about how to perform a sonographic tour of the abdomen. This article—and the rest of the series—will discuss ultrasound evaluation of specific abdominal organs/systems, including scanning principles, normal sonographic appearance, and identification of common abnormalities seen during ultrasound examination.

When using the systematic approach described in previous articles, the sonographic tour of the abdomen begins in the cranial abdomen, evaluating the liver and gallbladder. This article reviews the normal ultrasound appearance of the liver and gallbladder, steps for obtaining appropriate views, and some common abnormalities seen with ultrasonography of these organs. In Part 2, causes of generalized hepatic changes and the ultrasound appearance of biliary abnormalities will be reviewed.

Liver Lobes
The liver is composed of 4 lobes, 4 sublobes, and 2 processes (Figure 1): 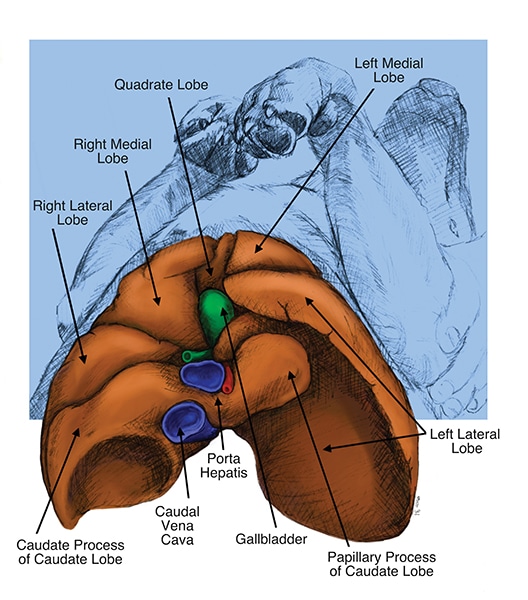 The hepatic lobes cannot be distinguished with ultrasonography. However, when significant abdominal effusion is present, the divisions between the hepatic lobes become more apparent. In dogs, the liver’s left lobe (medial sublobe), quadrate lobe, and right lobe (medial sublobe) encircle the gallbladder. The caudate lobe extends dorsally and caudally, ending with the renal fossa, which contains the cranial pole of the right kidney.

Liver Vasculature
The liver parenchyma has a coarse echotexture, and portal vessels are the dominant vascular structure noted throughout the liver (Figure 2). The hepatic and portal veins form specific divisions to each of the liver lobes. The porta hepatis is the central portion of the liver to the right of midline where the portal vein, hepatic artery, and bile duct (see Gallbladder Evaluation) enter and exit the liver. 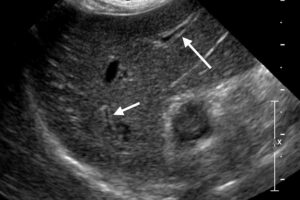 FIGURE 2. Long-axis image of a canine liver. The hyperechoic line along the left side of the image represents the lung–diaphragm interface; the arrows mark the hyperechoic portal vessels. 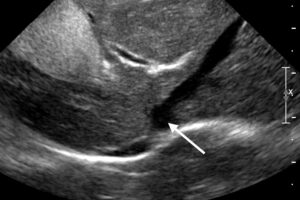 1. With the transducer in the subxiphoid position, angle it to the left to evaluate the left lobe in the long-axis plane, with the diaphragm–lung interface (a bright hyperechoic line) noted along the cranial border of the liver (Figure 2). The fundic portion of the stomach is just caudal (Figure 4) to the left lobe of the liver. 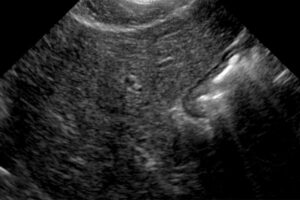 FIGURE 4. Long-axis image from a dog (the cranial side is the left side of the image). The falciform ligament and fat are in the near field, and the liver is deep on the left. The stomach (on the right side of the image) is relatively empty, with gas inside the gastric wall and reverberation artifact extending from the stomach.

2. Angle the transducer back to midline and then toward the right side of the patient to image the gallbladder (Figure 5). 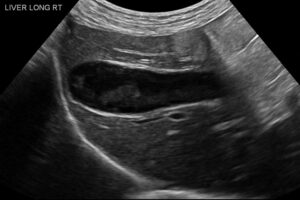 FIGURE 5. Long-axis image from the right side of the abdomen of an adult dog. Echogenic material can be seen in the gallbladder, which is normal in cats.

3. Angle the transducer back to midline, and rotate it 90 degrees, with the notch pointing toward the patient’s right side. Then angle the probe ventrally and dorsally to see the entire extent of the liver. 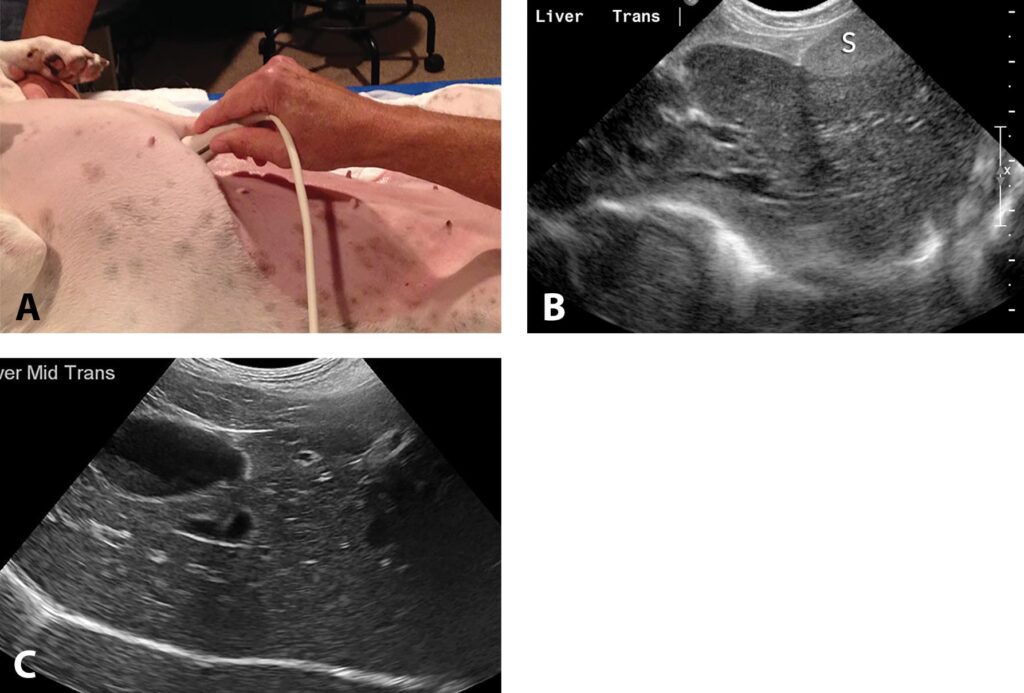 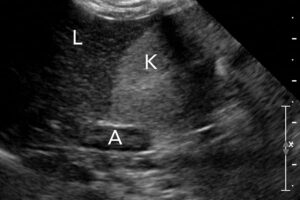 FIGURE 7. Long-axis dorsal plane image, with the notch of the transducer pointing toward the cranial aspect of the dog. The caudate lobe of the liver (L) can be seen, with the renal fossa in the same area as the right kidney (K). The right adrenal gland (A) is in the far field. 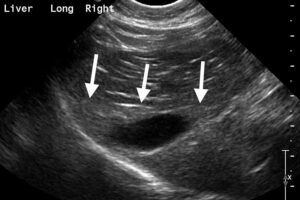 A “window” that is often used to evaluate dogs and cats with suspected portosystemic shunts is a transverse imaging plane between the dorsal right 11th and 12th intercostal spaces. This window allows visualization of the relationship between the porta hepatis and the aorta, caudal vena cava, and portal vein (Figure 9).

FIGURE 9. Dog in dorsal recumbency, with the ultrasound transducer positioned in a transverse imaging plane at the level of the 11th intercostal space and the notch pointing dorsally (A); in this image of the same dog (B), the aorta (AO), caudal vena cava (CVC), and portal vein (PV) can be seen in cross-section from the left to right side.

FIGURE 10. A bilobed liver is a normal anatomic variant in cats. Long-axis image showing 2 chambers associated with the same gallbladder (A); short-axis image from a different cat showing 2 compartments stacked on each other (B).

Parts of the gallbladder that are not normally visualized are the: 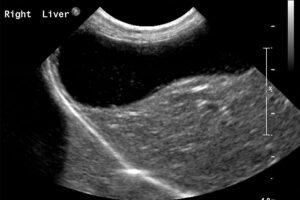 FIGURE 11. Parasagittal (long-axis) image of a normal canine gallbladder, with a small area of echogenic material seen in the gallbladder. 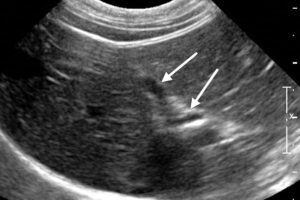 FIGURE 12. Transverse (short-axis) oblique image from a cat of the cranial right abdomen caudal to the level of the gallbladder (cat’s right side is on the left side of the image). The tubular structures are the cystic duct and bile duct (arrows); these ducts measure 2 to 3 mm in diameter and are normal in cats.

Generalized abnormalities will be discussed in Part 2 of this article.

Focal and multifocal nodules are < 3 cm, and can be anechoic, hyperechoic, hypoechoic, and/or heteroechoic, with a target lesion appearance (Figure 13).

Target lesions are nodules with hyperechoic centers and hypoechoic rims. These lesions are often metastatic, particularly if there are multiple target lesions in several abdominal organs (liver, spleen, kidneys). Due to the overlap in ultrasound appearance between benign and malignant lesions, either cytology or histology is needed for a final diagnosis. 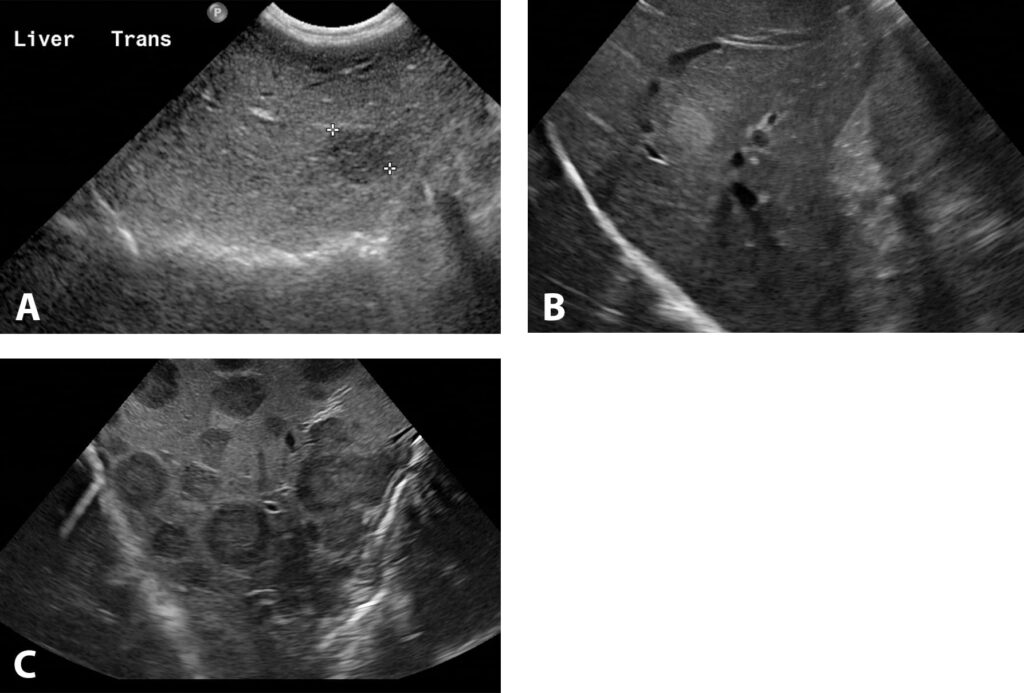 Hepatic masses can be complex, with hyperechoic and hypoechoic features and areas of cavitation consistent with necrosis (Figure 14). These lesions can become quite large and create a cranial abdominal mass effect on abdominal radiographs. A large hepatic mass is most commonly a primary hepatic tumor, with varying grades of malignancy (from hepatoma to hepatocellular carcinoma). 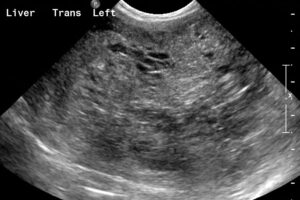 FIGURE 14. Transverse image from the left side of a 10-year-old spayed female dog in which a hyperechoic liver mass is present (> 5 cm in diameter), with some areas of cavitation noted in the near field. On histology, this mass was shown to be a hepatocellular carcinoma.

In cats, cystic adenomas and adenocarcinomas are common and have a hypoechoic appearance with multifocal cystic areas (Figure 15). Other tumors that can cause single or multiple hepatic masses include lymphoma, histiocytic sarcoma, and hemangiosarcoma. Any large tumor mass in the liver can result in hemorrhage and peritoneal effusion. 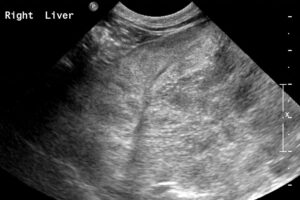 Dystrophic mineralization typically occurs within the parenchyma and can be seen as: 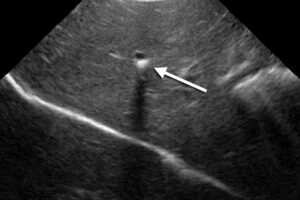 FIGURE 16. Long-axis left-sided image from a dog. There is a focal area of mineralization (white arrow) with distal acoustic shadowing. Active hepatic disease was not seen at this time.

Intraparenchymal gas can be seen: 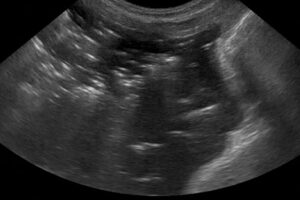 FIGURE 17. Transverse image from the cranial left abdomen of a dog. Note the large hypoechoic mass with multiple areas of speckled increased echogenicity consistent with gas. At surgery, a liver lobe torsion with necrosis was identified; anaerobic infection was found on culture.

Ultrasonography of the gallbladder is complicated by the:

Liver evaluation takes time, with both intercostal and intraabdominal approaches often needed. It is important to note both the structures that can, and cannot, be visualized in the liver and gallbladder (Table 2). 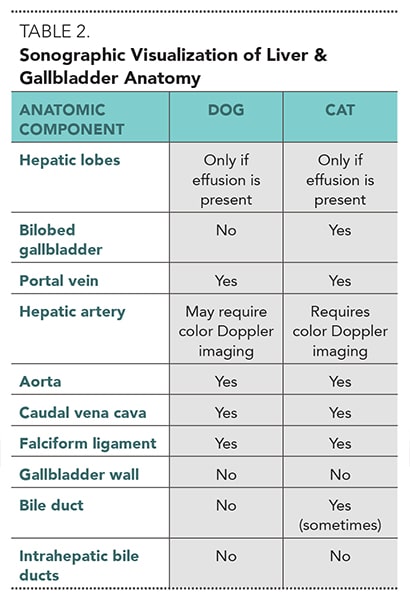