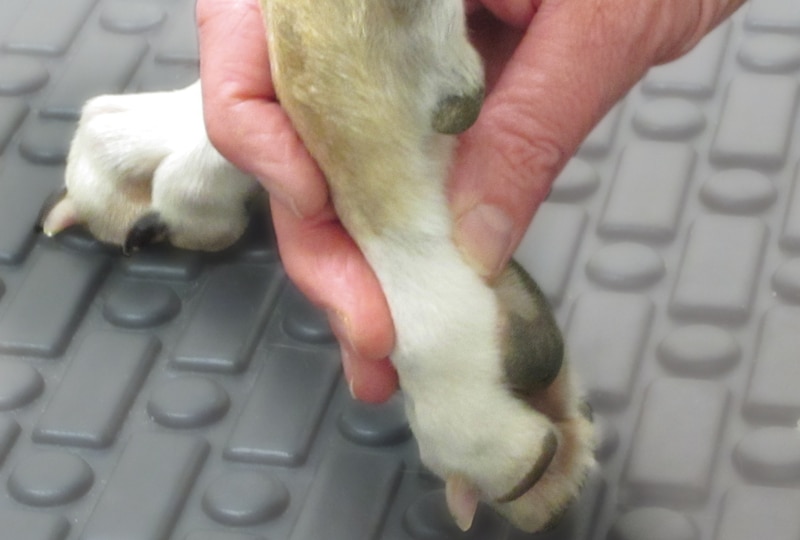 The purpose of the neurologic examination is to:

1. Confirm the existence of a neurologic condition
2. Localize the lesion (ie, make a neuroanatomical diagnosis).

Repeat neurologic examinations are helpful to detect subtle changes or progression of signs.

This article will discuss how to perform the neurologic examination 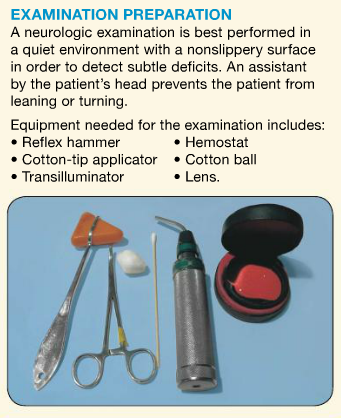 The neurologic examination can be divided by evaluation of:

While taking the patient’s history (see Taking a History: Questions to Ask), allow the animal to explore the examination room, which provides an opportunity to perform a mentation evaluation. This evaluation requires some knowledge of the patient’s normal behavior.

Mentation can be described as follows:

Taking a History: Questions to Ask

Posture describes the animal at rest; the following conditions may be noted:

The following postures are rare but can help in lesion localization:

Gait is assessed both in the examination room and in an area where the patient can be walked; stairs may be useful for detection of subtle gait abnormalities. Gait abnormalities are often a mix of weakness, paresis, and ataxia.

The following key words should be used to describe gait:

Other abnormalities that provide a more precise description of the quality and degree of the paresis include:

Cranial nerve evaluations are either reflexes or reactions:

Several of the tests to assess cranial nerve function rely on responses; for example, when the patient moves its head away when sensation of the face is tested. See Cranial Nerve Assessment for a description of cranial nerve assessment tests, available at todaysveterinarypractice.com (Resources).

To assess motor function in a nonambulatory patient:

Motor function can also be assessed by:

• Then encouraging the patient to walk with you.

•Voluntary movement may be seen as the patient tries to sit up and move forward.

Note: Movements elicited when touching the patient may be reflex movements rather than actual voluntary movement.

EFFERENT NERVES: Carry impulses away from the central nervous system to effectors

Postural reactions are complex responses that maintain an animal in its normal, upright position. An abnormality indicates a lesion anywhere along the ascending or descending pathways in the peripheral or central nervous systems. A lesion in the cerebral cortex may cause marked abnormalities in postural reactions without any change in gait.

Postural reaction tests are challenging to perform well and require good technique and a cooperative patient. The paw replacement test (previously called conscious proprioception) and hopping test are the assessments most frequently performed.

If results are equivocal due to poor technique or an uncooperative patient, other tests can be performed to confirm findings. In patients that are weak from systemic illness or sedated with drugs, the paw replacement test may be delayed or absent.

See Postural Reaction Assessment for a list of tests and descriptions on how to perform them.

• Flex the paw so the dorsum of the paw is on the floor; do not let the patient put weight on the paw.

• The patient should return the paw to a normal position.

• A nonslippery surface and good support of the animal are essential to detect subtle deficits. 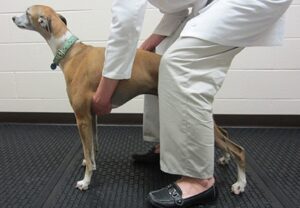 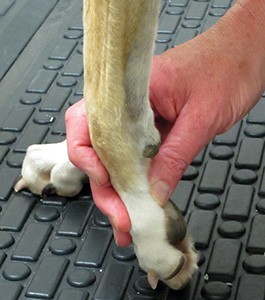 Figure 1. Paw replacement (thoracic limb): The patient is supported under the chest (A) to prevent loss of balance when the paw is knuckled over (B). Place a hand above the paw and only use a few fingers to flex the toes; then the patient will be less likely to pull the foot away when touched. 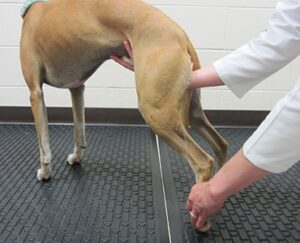 Figure 2. Paw replacement (pelvic limb): Support the patient under the pelvis or caudal abdomen; then place the hand above the paw.

• With the patient in your arms, slowly (so not to induce a vestibular response) approach a table or other surface and let the dorsum of the paw touch the table; the paw “away” from your body is tested.

• Push the patient over toward the foot that is on the ground. 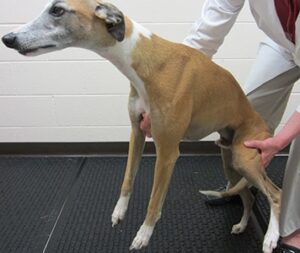 Figure 3. Hopping (thoracic limb): Place one hand under the abdomen to life the pelvic limbs from the ground; the other hand folds a thoracic limb back along the chest while pushing the animal toward the standing limb. 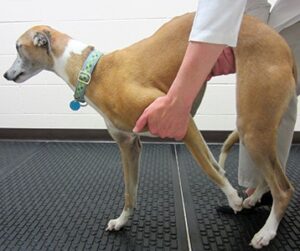 Figure 4. Hopping (pelvic limb): One hand under the chest lifts the thoracic limbs off the ground; the other hand, placed by the femur, lifts one pelvic limb off the ground and pushes the patient toward the standing limb.

• Wheel barrowing can be done with or without extending the neck.

• By extending the neck and elevating the head, visual compensation is removed, making the test more challenging and allowing detection of subtle abnormalities. 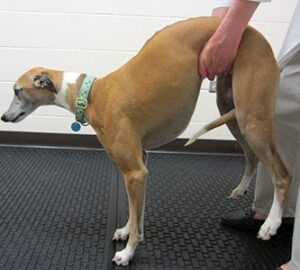 Figure 5. Wheelbarrow: Lift the pelvic limbs from the ground and move the patient forward, just as you would push a wheelbarrow.

• The patient is lifted straight up; then lowered to the ground.

• As the pelvic limb paws touch the ground, the patient extends the hocks and takes a few steps backwards to find its balance.

• The patient should not be walked backwards (ie, reverse wheel barrowing). 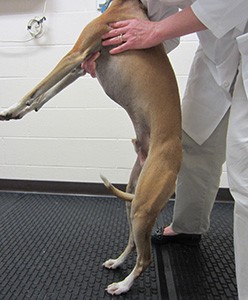 Figure 6. Extensor postural thrust: Elevate the patient from the ground by wrapping arms around chest; then lower animal until pelvic limbs touch the ground.

• Hemiwalking is similar to hopping, but 2 ipsilateral (same side) limbs remain on the ground.

• In severely affected patients, hopping and hemiwalking should either be done carefully or not at all, as these patients can fall, which may result in injury. 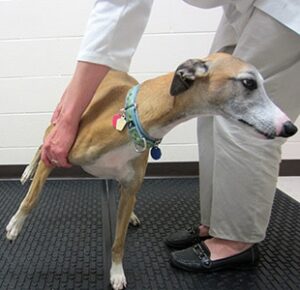 Examination of spinal reflexes assesses the:

The reflex hammer (percussion hammer) is used to hit the tendon of the muscle tested. Keep the muscle and tendon slightly stretched. Repositioning of the limb may be required several times to find a reflex.

Myotatic reflexes for the thoracic limbs: 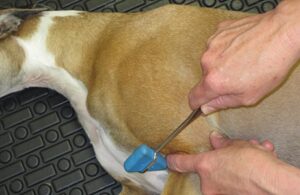 Figure 8. Biceps reflex: While pulling the limb slightly caudally, place a finger over the tendon and tap the finger with the pleximeter. In large-breed dogs, the reflex is easier to see if the limb is held parallel to the floor. 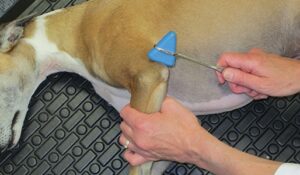 Figure 9. Triceps reflex: Flex and abduct the elbow by holding the limb over the radius/ulna. Tap the triceps tendon with the hammer.

Myotatic reflexes for the pelvic limbs: 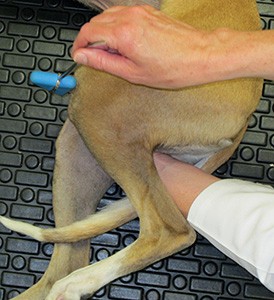 Figure 10. Patella reflex: Slightly flex the stifle and tap the patella tendon with the pleximeter. A normal response is forward movement of the tibia and extension of the stifle. 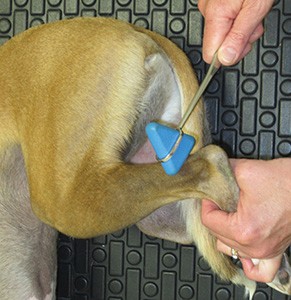 Figure 11. Gastrocnemius reflex: Flex and abduct the hock by holding the limb over the metatarsus; keep the hock flexed, which keeps the tendon tense.

• The withdrawal reflex engages all nerves in the thoracic (C6–T2) and lumbar (L4–S3) intumescences, respectively (Figures 12 and 13). 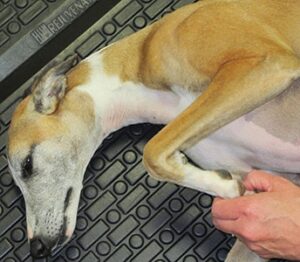 Figure 12. Withdrawal reflex (thoracic limb): Watch for flexion of all joints; the reduced reflex often is best seen in the shoulder joint. 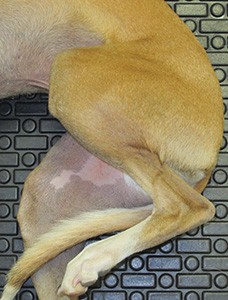 Figure 13. Withdrawal reflex (pelvic limb): Watch for flexion of all joints; the reduced reflex often is best seen in the hock.

• This reflex is induced by touching or pinching the skin of the toe web. A stronger stimulus may be required in a tense patient with increased muscle tone.

• It is important to assess the quality of the entire reflex and watch for full flexion of all joints. 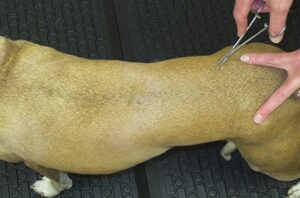 Figure 14. Cutaneous trunci reflex: This reflex is present cranial to the L4 spinal cord segment, which approximately correlates to the wings of the ilium.

The last step in the neurologic examination is palpation along the spine and muscles for pain; muscle tone and atrophy can also be evaluated.

• Assess whether the neck is painful and check range of motion (in all directions).

• Neck flexion is usually not performed postoperatively or if an atlantoaxial subluxation (instability between C1 and C2) or fracture is suspected (Figures 15 and 16).

• Avoid aggravating pain in limb joints by palpating the patient in lateral recumbency. 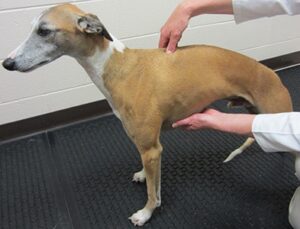 Figure 15. Palpation: When palpating the spine, use the free hand to support the area being palpated and prevent the patient from falling or sitting down. 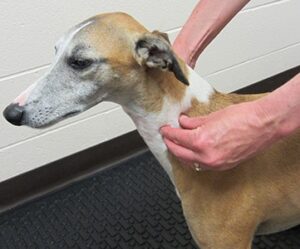 Figure 16. Palpation: When palpating the neck, palpate over the transverse processes of the vertebrae.

In general, pain perception is only assessed in patients with loss of motor function; however, young patients presenting with signs of a sensory neuropathy are an exception.

• Note that a withdrawal reflex can be elicited in animals with loss of pain perception; this reflex should not be mistaken for voluntary motor function or pain perception.

Once the neurologic examination has been completed, a neuroanatomic diagnosis can be made. Read Part 2 of The Neurologic Examination in Companion Animals, which discusses localizing lesions and making a diagnosis, in the March/April 2013 issue of Today’s Veterinary Practice.