Are We Doing Enough to Support Colleagues at Risk for Suicide? 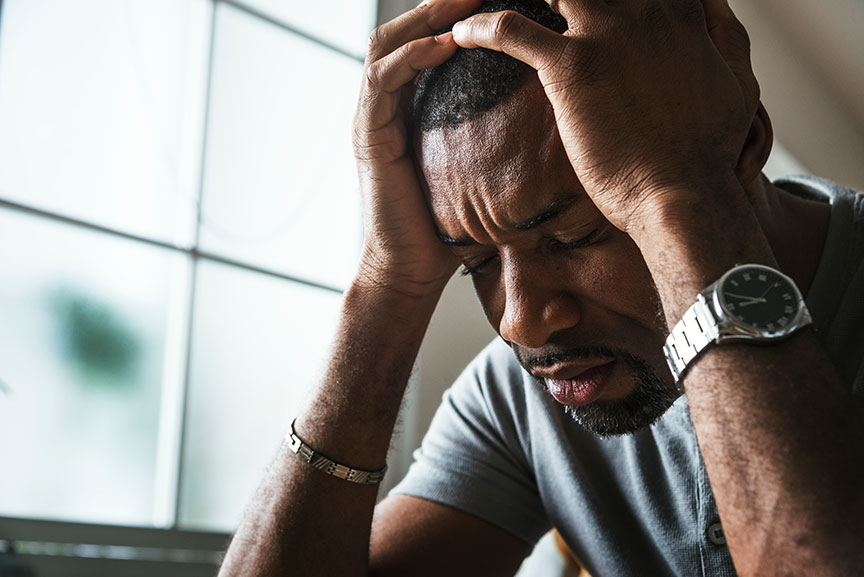 Does your veterinary practice have resources in place for employees who are at risk for suicide? Our poll indicates that we could — and should — be doing more. Photo: Shutterstock.com/Rawpixel.com

Being able to recognize and respond to signs that someone is thinking of suicide may help prevent a death by suicide. Often, it’s not that people miss the signs; it’s more common that they don’t know how to respond.

Even though it’s acknowledged by mental health professionals that how we talk about, write about and report on suicide makes a difference for those at risk, the veterinary profession is struggling with providing workplace suicide awareness and prevention resources.

Here at Today’s Veterinary Practice, we’ve been grappling with the question: Are we doing enough in the veterinary profession to help colleagues who are at risk for suicide? We wanted to become part of the solution, so we began by asking our Facebook fans, “Does your practice have strategies and programs to support employees who may be considering suicide?” 87% of the 71 respondents answered “no,” while only 13% replied “yes.” 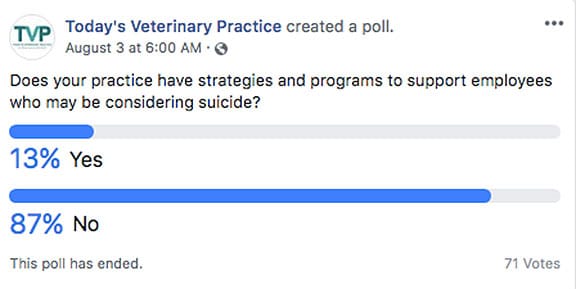 Given the wake-up call the veterinary profession received when the Centers for Disease Control reported that veterinarians in the U.S. are at an increased risk of suicide, a trend that has spanned more than three decades, these results are disheartening. According to the CDC, suicide rates among the general public have increased by 30% since 1999. Nearly 45,000 lives were lost to suicide in 2016 alone. We reported on the CDC findings earlier:

At the time of the 2018 report, CDC Director Robert R. Redfield, M.D., noted, “Our findings suggest mortality from suicide among veterinarians has been high for some time — spanning the entire 36-year period we studied. This study shines a light on a complex issue in this profession. Using this knowledge, we can work together to reduce the number of suicides among veterinarians.”

NIOSH researchers looked at records from 11,620 veterinarians who died during the years 1979-2015. Data for the study came from the American Veterinary Medical Association (AVMA) and CDC’s National Center for Health Statistics.

The National Alliance on Mental Illness reports that being able to recognize and respond to signs that someone is thinking of suicide might help avert a death by suicide.

A sense of belonging, social support and removing the social stigma in addressing mental illness are key components in preventing someone from attempting suicide. Make sure your veterinary practice is providing a safe haven and support for colleagues in need. If you do not have resources in place, it’s time to provide them.

• Be aware of risk factors. Recognize emotional and mental suffering in co-workers, and signs that they may be at risk for suicide. These signs include talking about suicide, hopelessness, not being around, or self-harm. Behavioral signs include mood swings, sadness and hopelessness. A secondary risk factor is possession of lethal weapons or powerful drugs.

• Foster workplace communication. Eliminate stigma related to mental health issues so that all employees feel safe asking for help. Add an Employee and Family Assistance Program (EAP) to provide appropriate support and counseling services to those who may have thoughts of suicide.

• Provide training. Offer workshops, not just printed materials, that focus on recognizing the warning signs of suicide. Workshops and team meetings that encourage conversations centered on emotional and mental health issues allow employees to confide in and support one another. Provide awareness training to all managers. Offer workshops in managing stress and developing coping skills to help people deal more effectively with problems.

NAVC is committed to promoting suicide awareness and helping those at risk in the veterinary community. Learn more about the You Matter track at VMX.