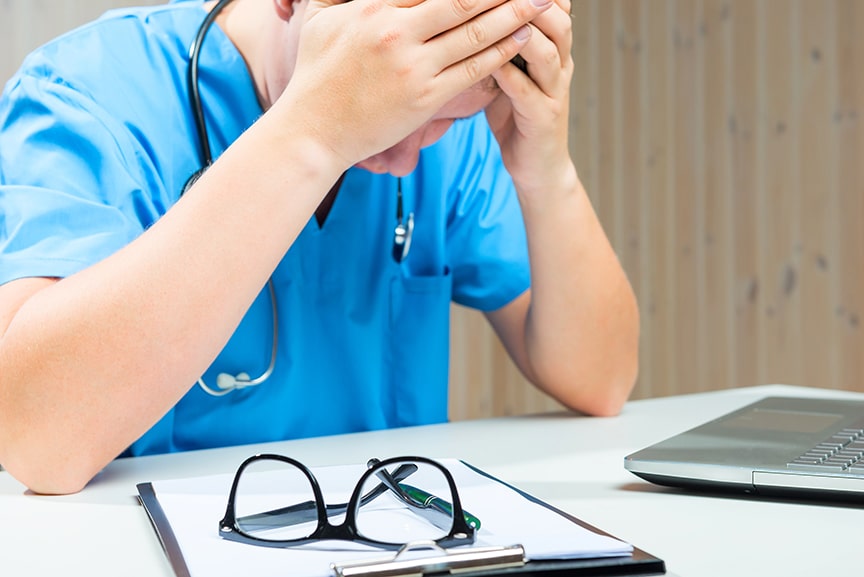 Veterinarians are experiencing climbing rates of psychological distress and suicide. The University of Minnesota is hopes to combat the problem by introducing online therapy for their students. shutterstock.com/kosmos111.

Often, the number one reason people choose becoming a veterinarian as a career is their unconditional love for animals. For many, it is both the best — and the hardest — career choice. That is because for every high the profession provides, there are just as many lows. It’s a tough job. Veterinarians spend 8 years of schooling, accrue a tremendous amount of debt, work long hours, suffer compassion fatigue, and often sacrifice a home life for their work life.

Adding to these stresses are the day-to-day challenges of being a veterinarian. Pet owners don’t always consult their vets for professional advice on key issues such as nutrition, preventives, and exercise. The internet makes it easier for clients to spread false information and slander vets and their staff if something isn’t to their liking. Veterinarians often have to euthanize old, homeless, critically injured or terminally ill animals. Modest incomes and few benefits make it difficult to pay off school loans. Although medicine and technology have contributed to wonderful advances in the veterinary field, appreciation and respect for the profession have stagnated while compassion fatigue and burnout have increased.

Depression and Suicide in the Veterinary Profession

This is why the psychological distress rate, depression rate, and suicide rate for veterinarians is significantly higher than the general population.1 A Veterinary Wellbeing Study by Merck Animal Health (MAH) in February 2018 was conducted to examine the causes of climbing levels of mental distress and suicide rates among veterinary professionals. Debt and stress were cited as the most “critically important” issues, with well over 50% of survey participants feeling that way. 8.7% to 9.1% of younger veterinarians (aged 18–34 and 35–44, respectively) cited increased psychological distress. Psychological distress relative to the amount of student debt increased from 9.5% (owing $1–$99,999) to 11.3% (owing $100,000­–$199,999) before dropping back down to 9.2% (owing $200,000+). The survey found that the higher the debt, the higher the amount of suffering; 15.6% of those owing $200,00+ said that debt impacted their wellbeing. But even 6.1% of those who have no debt say owing (and presumably, paying off) student debt caused their wellbeing (which is defined as “the way individuals think and feel about their lives compared to the best/worst possible lives they can imagine” in the MAH study) to suffer. Finally, only 41% of vets would recommend the career — as compared to 70% of the general population — which speaks volumes about the very real problems that veterinarians face and how the profession can be glorified.2

While most veterinarians manage to handle all these types of stresses, some don’t. A study conducted by the Centers for Disease Control and Prevention (CDC) and published in the Journal of the American Veterinary Medical Association (JAVMA) looked at veterinarian deaths between 1979 and 2015 and found that female veterinarians were 2.1 times more likely to die by suicide compared to the general population, while male veterinarians were 3.5 times more likely. 75% of those numbers worked in small animal practice.1 Those are very disproportionate numbers considering veterinary medicine is a drop in the bucket of professions. The MAH study found that the suicide rate among veterinarians is “critically important” to 52% of survey respondents and moderately important to 29%, yet most practices do not offer any employee assistance programs, whether it be for financial or mental health problems. Only 50% of those experiencing psychological distress sought treatment elsewhere, whether it be therapy or medication.2 Although bigger companies in the veterinary field, such as Banfield, are beginning to implement programs to relieve distress among their employees, smaller practices tend to ignore it or put it on the backburner.

The Learn to Live Program

This is why financial and mental health has to be recognized from the bottom up, where veterinarians begin their career — at the university level. The University of Minnesota (UMN) is doing just that. The university has recently teamed up with Learn to Live, a Minnesota-based online therapy program, to provide a new method of assistance to their student body.

Learn to Live was started in 2013 by psychologist Dr. Russell Morfitt, who wanted therapy to be accessible to anyone. He utilized an online platform and based it on Cognitive Behavioral Therapy (CBT) — known for its to-the-point, short-term, identify-and-rectify methods that work just as well via online sessions as in-person sessions. Both the online aspect and CBT technique made it particularly appealing to mental health clinics at colleges and universities in Minnesota, and eventually piqued the interest of Matt Hanson, Assistant Director of Boynton Health, UMN’s mental health clinic. Students were requesting additional staff and hours from the mental health clinic, so in response, Hanson and a team (comprised of the chief health officer, chief medical officer, mental health director, director of student counseling services, and a representative from the international student and scholar services) settled on Learn to Live.

“There’s a larger group of us that got to meet with Learn to Live, to help shape some of the efforts, some of the content, and some of the planning about how to launch Learn to Live here on campus when it first started a couple years ago,” Hanson shared in a phone interview. “We’d been thinking for a while that we wanted to increase some kind of online presence or offering for U of M students . . . Learn to Live being a local organization was very attractive to us also because we could develop relationships with their executive staff and their clinical team.”

Hanson had heard great success stories from smaller schools in the state and decided that the online, self-paced program would appeal to students who didn’t feel comfortable getting help face-to-face or preferred to complete the modules at odd hours and whenever they felt they needed it. “We know that students do spend a lot of time online, a lot of time on their phones. We thought this would be a good opportunity to allow for some after-hours flexibility.”

The 4 modules of the Learn to Live program are designed to address problems students face nowadays, Hanson says, including “stress, anxiety, and worry; depression; social anxiety; and insomnia.” The program has become quite popular, and many students use it as a complement to the in-house therapy Boynton offers and report the most positive feedback, stating that it helps with reinforcement and continuity between in-house sessions. “There are a lot of benefits just in terms of the process of the delivery of the service to students,” Hanson adds.

The Program Is Available to CVM Students

Learn to Live is available to students attending the College of Veterinary Medicine located at the main campus in Minneapolis, but it was designed for all UMN students. There is no specific data to show what percentage of CVM students are taking advantage of it, but the modules being chosen by students seem to parallel the issues cited by MAH survey participants as being “critically important” — debt, stress, and personal wellbeing. Hanson shared that 44% of the students using the Learn to Live program at the Twin Cities campus chose the stress, anxiety and worry module. The depression module was the second highest one used, totaling 36%.

These parallels suggest that some of these concerns are universal, but programs such as UMN’s Learn to Live could help lower the depression and suicide rates among credentialed veterinarians, as well as help prepare future veterinarians for stressors such as managing debt. These programs could also serve as models for employer’s employee assistance programs.

Learn about how you can manage your work/life balance and wellbeing by reading articles in our Finding Balance column archives.