Beyond the Map: The State of Heartworm Incidence in the United States

The 2016 American Heartworm Society Incidence Survey found increased heartworm incidence in a number of states, particularly in the Southeast, Mid-South, and Delta regions.

Chris Rehm, DVM, President of the American Heartworm Society (AHS) board of directors, is a veterinarian and graduate of Auburn College of Veterinary Medicine. He began practicing in Mobile, Alabama, more than 30 years ago. What began as one veterinary clinic, Rehm Animal Hospital, PC, has grown to 4 American Animal Hospital Association–certified hospitals in 2 counties in lower Alabama. He employs 13 veterinarians and more than 70 support staff.

How many pets in the United States are infected with heartworms? The truth is that no one knows. Because heartworm diagnosis requires one or more blood tests that must be conducted in a veterinary clinic and/or testing laboratory, diagnosis is limited to patients seen in veterinary hospitals and animal shelters. Dogs and cats not seen by veterinarians and/or not tested for heartworms during annual veterinary visits may be infected but go unrecognized.

While an exact number of infected pets cannot be pinpointed, the American Heartworm Society (AHS) has tracked the incidence of heartworm diagnosis in the United States for the past 15 years. The first AHS Incidence Survey was conducted in 2002 and focused on heartworm diagnoses made in veterinary hospitals during the 2001 calendar year, including data from tests conducted both in-clinic and in reference laboratories. The AHS has continued to survey US veterinary practices every 3 years and, since 2007, has added animal shelters to the survey. The survey results are used to create the AHS Heartworm Incidence Map every 3 years. The 2016 map (Figure 1) was unveiled in April 2017. 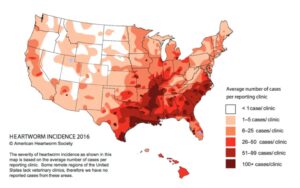 Thousands of veterinary practices and shelters participated in the AHS survey in 2016, and because many have reported data survey after survey, the AHS has been able to use the information to track trends in participating practices, as well as the trajectory of heartworm incidence. This is especially important, given that in the past several decades, heartworms have spread from highly endemic regions of the United States, such as the Southeast and Mississippi Delta regions, to states once considered “non-endemic,” including California and Arizona.

Because it is not possible to know the exact number of heartworm infections in the United States, the AHS survey focuses on incidence versus prevalence. Nevertheless, the AHS has been able to venture a conservative estimate of heartworm prevalence via the following calculations:

Almost 5000 veterinary practices and shelters participated in the AHS survey in early 2017; the incidence numbers reported are based on the 2016 calendar year. Participating veterinarians reported numbers of patients tested for heartworm infection, as well as the number of positive cases from that total. In addition, participants responded to a brief survey designed to provide information on factors behind the data. The following findings were identified:

Heartworm incidence is up. The incidence numbers reported by participants in the 2016 AHS Incidence Survey indicated that the average number of positive cases per veterinary clinic has been climbing, rising by 21.7% over 2013 numbers; this was due to a small increase in both the absolute number of positive cases per reporting clinic and the percent positive per clinic. The average number of heartworm-positive states rose in 26 states, as well as the District of Columbia; stayed the same in 3 states; and dropped in 22 states (Figure 2). Of survey respondents, 23.3% reported seeing more heartworm cases in 2016 compared with 2013, while 19.8% reported a decline in their practice area.

Veterinarians who reported an upward trend in heartworm diagnoses cited several reasons for the change, according to the AHS opinion survey. Almost half (47.8%) cited failure to give preventives, skipping doses. or failing to give preventives year-round as contributing factors. Other factors believed to contribute to incidence increases in certain regions were weather conditions conducive to heartworm transmission in 2016 (weather may also have been a factor where numbers of heartworm-positive dogs fell; regions such as the Southwest and states such as Alabama suffered from drought in 2016) and the movement of infected dogs into practice areas. Insufficient efficacy of heartworm preventives was viewed as a factor by only 3.3% of respondents who saw incidence rise. 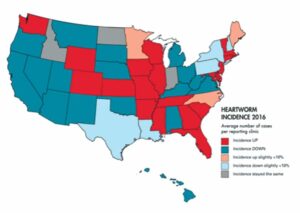 The results of the AHS Incidence Survey represent a mix of bad and good news. On one hand, heartworm incidence has increased in a number of states, especially those states in the most heartworm-endemic areas of the Southeast, Mid-South, and Delta regions. On the other hand, it is clear that there is a straightforward answer to this: (1) convince more pet owners to use preventives and (2) convince them to protect dogs and cats year-round—with no lapses.

The AHS Heartworm Guidelines recommend annual heartworm testing and year-round heartworm prevention for all canine and feline veterinary patients. As the results of this survey suggest, compliance with these guidelines has the potential to dramatically alter the trajectory of heartworm incidence in pets.