The CAPC recommends year-round treatment, control, and prevention of these external parasites.

William Stich, MS, PhD, is a professor of parasitology at the University of Missouri Department of Veterinary Pathobiology. Dr. Stich served as president for the Conference of Research Workers in Animal Diseases and as a councilor for the Society of Tropical Veterinary Medicine. He currently serves on the CAPC Board of Directors and as Editor in Chief of Animal Health Research Reviews. Dr. Stich received his MS and PhD in veterinary parasitology from Oklahoma State University.

Read Articles Written by I. Craig Prior 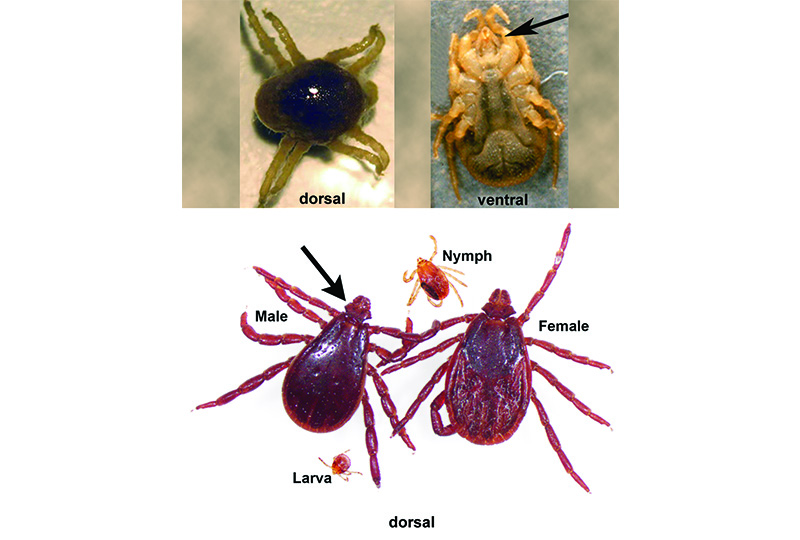 Ticks and other mites are collectively classified into the arachnid subclass/order Acari (or Acarina). Mites that parasitize animals are morphologically distinguishable (Figure 1):

FIGURE 1. Mites that parasitize dogs: The astigmatid mites, Sarcoptes scabiei (A) and Otodectes cynotis (B), have a sack-like structure and can be identified to species level by careful examination of legs and tegument. Prostigmatid mites have distinct structures; for example, the cigar-shape appearance of Demodex (C) and hook-like palps of Cheyletiella (D). Mesostigmatid mites possess long legs, as in Ornithonyssus species (E), that give them a spider-like appearance. Courtesy National Center for Veterinary Parasitology and CAPC

Because these parasites have physiologic similarities, the same molecules are often used for preventive and therapeutic treatments to control a variety of acarine parasites; however, details on long-term control can vary according to the mites encountered.1-3

Transmission. Infestations are transmitted through direct contact between animals or fomites (eg, clipper blades). S scabiei does not have an environmental stage, but there are reports of their survival for several days off of the host.

Diagnosis. Diagnosis of scabies involves visualization of Sarcoptes mites in skin scrapings, which need to be deep enough to examine the full thickness of the epidermis (ie, to produce blood-tinged samples).

S scabiei can be present despite repeated negative skin scrapings. Anecdotally, the ear itch reflex can be more helpful in presumptive diagnosis than skin scrapings. Empirical treatment and monitoring for response to treatment may be justified if mites are not seen but lesions strongly suggest sarcoptic mange.

Treatment. Several flea- and tick-control products are also labeled for preventing, treating, or aiding in treatment/control of canine sarcoptic mange; the active ingredients are listed in Table 1.

Clinical Findings & Diagnosis. Infection with O cynotis—which infest the external ear canal and surrounding skin of dogs, cats, and ferrets—results in head shaking, ear scratching, and inflammation of ear canals. These mites can be observed with an otoscope or by ear canal swabs.

Treatment. Selamectin is labeled for treatment of canine and feline O cynotis infestations. Secondary bacterial or fungal infections can be present, and these conditions should also be treated when suspected.

The cigar-shaped Demodex species is a common parasite of mammals, and mites are usually present in low numbers within hair follicles or sebaceous glands.

Clinical Findings. Demodectic mange in dogs, often attributable to an overgrowth of Demodex mites, is a moderate to severe disease often associated with underlying systemic disease or a suppressed immune system, as described in more detail elsewhere.4,5 Demodectic mange can be exacerbated by secondary bacterial infections, resulting in a severe form of the disease known as red mange.

Treatment. Localized demodicosis may resolve without treatment, or can be treated with rotenone-containing ointment. Generalized demodectic mange may require more aggressive therapy, along with comprehensive measures to address underlying causes of the disease and/ or secondary bacterial pyoderma. Amitraz is the active ingredient of the product labeled for control of D canis.6

These nonburrowing mites appear as walking dandruff on the skin surface of dogs, and are readily distinguished microscopically by fanglike chitinous claws on their palps. These mites can cause exfoliative dermatitis; skin lesions may develop on people in close contact with infested dogs or cats. A product containing dinotefuran, permethrin, and pyriproxyfen is labeled for control of canine Cheyletiella infestations in the U.S., and off-label treatments are described elsewhere.7

This group includes mites that can become pests when brought into buildings by birds or rodents.

These non-burrowing mites feed on the keratin layer of epidermis in canine nasal and paranasal sinuses.

Clinical Findings & Diagnosis. Although heavy infestations can cause sneezing and epistaxis in some dogs, they are often diagnosed by chance. The relatively large adult mites (> 1 mm, with legs extending beyond edges of their bodies) are visible to the naked eye, and may be seen in nasal secretions or crawling in the nasal cavity during rhinoscopy.

Treatment. No drugs are currently approved for treatment of P caninum, but macrocyclic lactones (ivermectin, selamectin, moxidectin, and milbemycin oxime) are reportedly effective.8

Only about 10 of the approximately 850 known tick species have varying degrees of medical importance in the U.S. These include members of the tick families Argasidae (soft ticks) and Ixodidae (hard ticks), the latter of which are further divided into 2 subfamilies, with distinct biologic features that affect feeding behavior and vector competence.

Table 2 briefly describes some of the tick-borne diseases and zoonoses that affect dogs in the U.S.

Soft-bodied ticks lack a sclerotinized dorsal scutum and are further characterized by mouthparts that originate on the ventral surface, though these mouthparts may extend beyond the anterior to become visible from the dorsal surface (Figure 2).

Larval and nymphal stages of the one-host spinose ear tick—Otobius megnini—infest mammalian ear canals, including those of dogs and people. These ticks are not known to be a vector for pathogens but can cause a painful form of otoacariasis.

Members of another argasid genus, Ornithodoros, live in dwellings or bedding areas of their hosts, taking multiple short blood meals over the course of several months to several years. Ornithodoros species have not been demonstrated to parasitize dogs in the U.S.; however, they are known to feed on dogs in other countries,10 and relapsing fever spirochetes vectored by Ornithodoros have been found in dogs from Florida,11 Texas,12 and Washington,13 suggesting that further investigation is warranted.

Most of the important canine tick parasites are classified within the family Ixodidae, which have partial (larvae, nymphae, and female adults) or complete (male adults) dorsal scuta, and mouthparts that originate at the anterior aspect (Figure 2). Ixodid ticks can directly affect dogs (eg, tick toxicosis/paralysis, injury to sensory organs, dermatitis, and anemia); however, pathogens transmitted by ixodid ticks are the major concern for dogs in the U.S. (Table 2).14,15

Table 3 describes the distribution, common hosts, and known pathogens transmitted by ixodid ticks most commonly reported to feed on dogs in the U.S.

Because different ticks transmit different disease agents, tick identification can be useful (Figure 3), especially when evaluating the likelihood for different transmission scenarios and risk for host exposure.16 Fortunately, with the exception of A maculatum, identification to genus level is usually sufficient to determine which infections are not considered transmissible by a tick, and minimal practice is needed to identify most adult ticks with the aid of a dissecting microscope or magnifying glass (Table 4). For example:

All but the genus Ixodes can be eliminated as potential vectors of B burgdorferi, A phagocytophilum, and probably the E muris–like agent.

As previously indicated, controlling diseases caused by tick-borne pathogens is the most important reason for tick control. Historically, the most successful approaches to vector-borne disease control have used procedures that limited vector access to susceptible hosts. Given the diversity of pathogens that ticks transmit to dogs, this is particularly true for canine tick-borne disease.

Canine Lyme borreliosis, for example, may be prevented with the aid of several commercially available vaccines, and the decision to use such vaccines is warranted in areas where Lyme disease is endemic. However, certain etiologic agents of anaplasmosis and ehrlichiosis are adapted to the same Ixodes species that transmit Borrelia burgdorferi; therefore, tick control is still necessary to protect susceptible hosts from these additional pathogens.

Effective tick control is approached from different perspectives, which include measures to reduce tick populations in the host environment as well as on individual hosts.

Environment. Steps to place barriers between ticks and domestic habitats limit canine (and human) exposure to ticks introduced from outside the household, which include:

Dogs. Individual hosts can be further protected by preventing them from roaming into areas frequented by animals unprotected from tick infestation, and ticks found on pets should be removed immediately to limit the likelihood of pathogen transmission.

The array of effective tick preventives on the market is expanding. These products (Table 5) contain one broad range molecule, or a combination of molecules, that kill and/or repel ticks.17 Although choosing from the many effective tick preventives can be challenging, the option of switching to a product based on a different molecule or drug class helps ensure that an efficacious solution is always found.

Note that several of these products can be toxic, and subsequently lethal, to cats, so it is critical to carefully check labels to ensure that the right product is applied to the appropriate host species.

CAPC recommends year-round application of these safe, affordable products to protect pets against unexpected exposure to ticks, even outside of tick season. Additional, in-depth, and regularly updated information regarding parasitic disease control guidelines is available at capcvet.org.