This new column explores the diagnosis, treatment, prevention, and control of parasitic infections based on CAPC’s detailed recommendations. First up for discussion are canine protozoan parasites.

One of CAPC’s principal achievements has been creating recommendations that support practitioners in their efforts to protect pets and people from parasites. These recommendations are based on peer-reviewed, published research findings and the collective parasitologic and clinical expertise of the CAPC board.In this series, CAPC board members will:

The full recommendations are available at capcvet.org.

Protozoan parasites, including vector-borne infections and intestinal protozoa, are responsible for a number of different diseases in dogs (Table). Although many infections are acquired by direct ingestion of infective stages, others may be transmitted by arthropods. These parasites are distributed worldwide or regionally. Accurate, prompt diagnosis and appropriate, specific treatment are critical to managing and preventing protozoan parasitic diseases in dogs.

Distribution. Worldwide, dogs may become infected with Babesia canis, B vogeli, B rossi, B gibsoni, B conradae, and other small and large Babesia species, some that have yet to be named.1,2

Vectors & Transmission. Many different tick species transmit Babesia species when feeding on dogs; the most common U.S. species include: 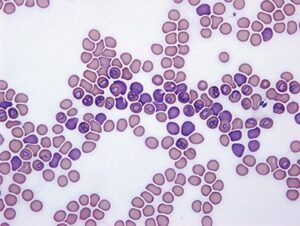 Figure 1. Piroplasms of a large Babesia species in canine erythrocytes.

Distribution. Hepatozoon americanum has only been described in the U.S., while H canis is found worldwide.4 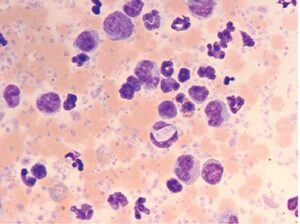 Distribution. Althought fairly uncommon in North America, dogs are infected with Leishmania species throughout much of the world. Infection has been diagnosed in dogs imported from endemic areas, such as the Mediterranean basin and Central and South America.

Vectors & Transmission. In many areas of the world, phlebotomine sandflies that have fed on an infected vertebrate transmit Leishmania species to dogs. In the U.S., transmission by sandflies has not been epidemiologically demonstrated, but canine infections are recognized, particularly in foxhound kennels, and are presumably acquired by direct transmission between dogs.7

Diagnosis. Infected dogs may remain asymptomatic or can develop severe, chronic disease, involving muscle wasting, ocular signs, renal disease, and alopecia and other skin lesions.8 Diagnosis is made by serology or identification of amastigotes in impression smears from affected tissues (Figure 3); PCR assays are also available. 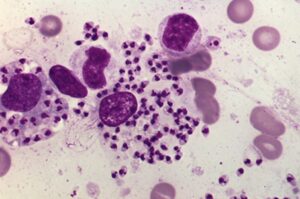 Treatment. Canine leishmaniasis is difficult to treat, although pentavalent antimonials and allopurinol can be used.

Zoonosis. Dogs are a major reservoir host for leishmaniosis—a zoonotic disease. Euthanasia of infected dogs has been recommended to limit transmission to humans and other dogs, particularly in regions where vector-borne Leishmania transmission is not yet endemic.

Distribution. Trypanosoma cruzi is the agent of American trypanosomiasis or Chagas disease. Autochthonous cases are occasionally reported from dogs in the southern U.S., where natural maintenance cycles exist, and are common in parts of South and Central America and Mexico.10,11

Vectors & Transmission. Infection is transmitted from kissing bugs (triatominae) to dogs and humans. Canine infections occur when infected kissing bugs are ingested or the bugs’ feces, which contain the organism, are deposited on or around the skin wound created by their feeding activity; infection is also transmitted transplacentally.12

Trypomastigotes may be identified on stained blood smears from acutely infected dogs (Figure 4); serology and PCR are also available. 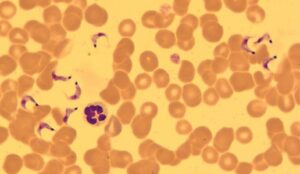 Figure 4. Trypomastigotes of Trypanosoma cruzi on blood smear of dog

Treatment. Benznidazole, the drug of choice for treating T cruzi in dogs, is not available in the U.S., and infected dogs are often euthanized.

Prevention. Preventing infection requires limiting access to kissing bugs by sealing kennels and keeping dogs inside. Limiting predation is also recommended because, although unproven, ingestion of infected reservoir hosts is a suspected route of transmission.12

Zoonosis. T cruzi is zoonotic and, in endemic areas, people are readily infected from a feeding bug vector’s feces. In the U.S., most human infections are associated with blood transfusion or travel to endemic areas.11

Distribution. Coccidia is a common finding in dogs, with some studies suggesting approximately 1% to 5% of dogs may be infected worldwide.

Diagnosis. Many infected dogs remain asymptomatic, developing immunity to limit infection and protect them from future infections; however, diarrhea, weight loss, dehydration, and even death can occur in severe infections, particularly those in young animals.15 Infections are diagnosed by fecal flotation, which reveals the characteristic oocysts (Figure 5). 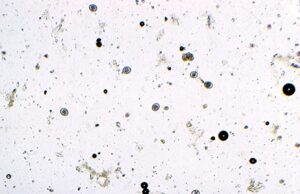 Treatment. Treatment with sulfadimethoxine, which is labeled as effective against the enteritis associated with coccidiosis, or ponazuril is recommended.

Prevention. Oocysts are resistant to environmental degradation; careful attention to sanitation, particularly in kennels and shelters where large numbers of young dogs are cohoused, is necessary to prevent infection.15

Distribution. Cryptosporidium species infect a variety of vertebrate hosts, including dogs and humans. Active infections are present in a very small percentage of dogs; most of these are due to C canis, which rarely infects people.16 The more common zoonotic agent, C parvum, is not known to occur in dogs.

Vectors & Transmission. Oocysts of Cryptosporidium species are immediately infective when shed in the feces, which usually occurs 3 to 6 days after infection.13

Diagnosis. Infections can cause secretory diarrhea, which can be particularly severe in immunocompromised individuals. Diagnosis is by sucrose flotation of feces, but recognizing minute oocysts can be difficult and use of a referral parasitology laboratory is recommended.

Treatment. Treatment is difficult—few drugs are consistently effective against Cryptosporidium species in dogs.

Prevention. Canine infections are considered a low-risk zoonosis; C canis has only been reported in immunocompromised humans in the U.S.16

Distribution. Infection with Giardia duodenalis is common in U.S. dogs.17
Vectors & Transmission. Infection occurs following ingestion of cysts from fecal-contaminated water, food, or fomites, or through self-grooming. The different assemblages of G duodenalis are considered to be fairly host specific.

Diagnosis. Following infection, trophozoites attach to intestinal villi, resulting in maldigestion, malabsorption, and diarrhea. Diagnosis is achieved by detection of:

Treatment & Prevention. No drugs are approved for treatment of canine giardiasis in the U.S., but fendbendazole and febantel have shown effectiveness.18 Bathing dogs removes cysts adhered to the hair and helps prevent re-infection.19

Zoonosis. Giardia is a common infection in humans, although the most common assemblages found in humans are distinct from those most often found in dogs.20 Human giardiasis contracted from a dog has not been conclusively demonstrated in North America. 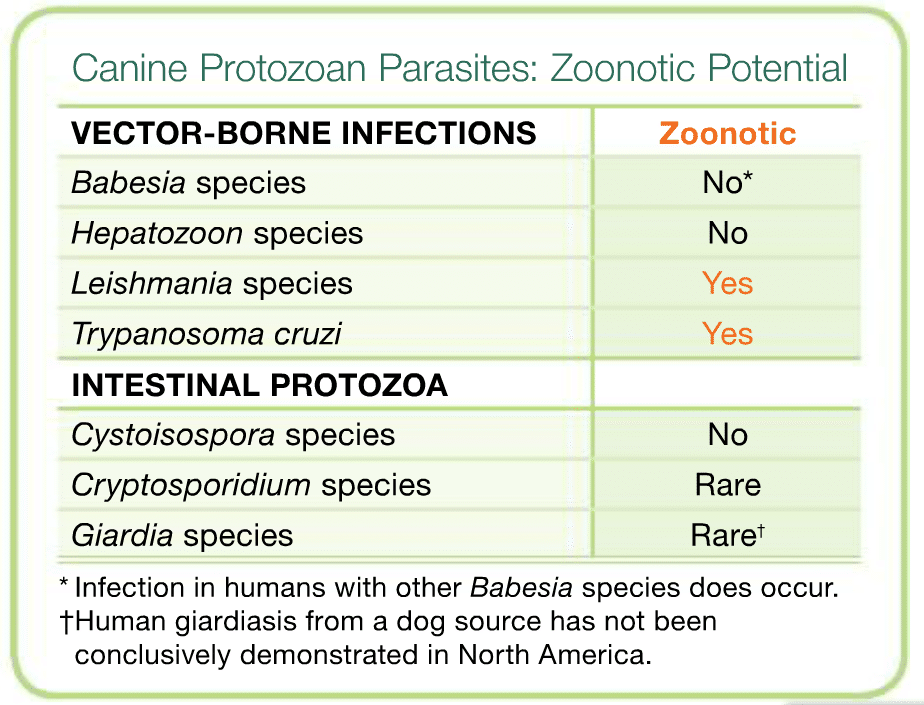 Protozoal parasites of dogs can critically affect canine and human health, with overt clinical disease from canine protozoa most often seen in debilitated or young animals. Infected dogs often present with signs of disease; however, asymptomatic infections also occur, and some protozoa may live undetected within the host for years.8

Identifying protozoal infections largely depends on awareness so that appropriate diagnostic tests are pursued, particularly with vector-borne infections. Careful history taking and physical examination, along with a judicious use of diagnostic tools, can lead to better management and improved outcomes.

VECTOR-BORNE INFECTIONS. Canine vector-borne diseases are highly prevalent, increasing in distribution, and often difficult to treat; preventing infection by consistent use of insecticides and acaricides and limiting exposure to ticks and other arthropod vectors are the most effective ways to protect dogs from these diseases.

Protecting dogs from protozoal parasites is critical to human health. Some of these infections, such as Leishmania species and T cruzi, are well recognized zoonoses, while others, such as canine Cryptosporidium or Giardia infections, are considered to carry a very low zoonotic risk.8,12,16,20 Veterinarians should pay close attention to:

Susan E. Little, DVM, PhD, Diplomate ACVM, is the Director of the National Center for Veterinary Parasitology at Oklahoma State University’s Center for Veterinary Health Sciences, where she serves as Regents Professor and the Krull-Ewing Chair in Veterinary Parasitology. Her research focuses on zoonotic parasites and tick-borne diseases. She has been recognized for teaching excellence, receiving the Pfizer (Norden) Distinguished Teaching Award (1999, 2010) and national Student AVMA Excellence in Teaching Award (1998, 2005), and for her outstanding research with the Pfizer Award for Research Excellence (2012). Dr. Little received her DVM from Virginia Tech and completed her PhD at University of Georgia.

Emilio DeBess, DVM, MPVM, is the state public health veterinarian with the Oregon Health Authority. His primary job is to track zoonotic diseases in both humans and animals in Oregon. He has received 2 Director Excellence Awards from the Department of Human Services in Oregon. Dr. DeBess conducts surveillance projects related to zoonotic diseases, including leptospirosis, toxoplasmosis, cryptococcosis, West Nile virus, and tick-borne illnesses. He received his DVM from University of California–Davis.