Because of their friendly and playful character, ferrets are commonly kept as pets in the United States. Ferrets (Mustela putorius furo) belong to the family Mustelidae. The genus Mustela includes weasels, the European mink, the American mink, ferrets, and South American weasels. Ferrets were originally domesticated and bred to hunt rabbits; although this practice is not common in the United States, it is still in use in Europe and Asia.1 Ferrets, like more than 30 other mammalian species with documented infections, are susceptible to infection with heartworms (FIGURE 1).2 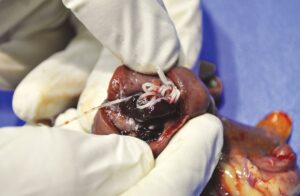 FIGURE 1. The right chamber of a ferret heart affected with Dirofilaria. Image courtesy of pathology service at the University of Georgia (UGA).

The first description of a heartworm infection was written in Italy in 1626; the first description in the United States was in 1847.3 Heartworm disease (HWD) is a vector-borne disease caused by the filarial nematode Dirofilaria immitis. This parasite belongs to the superfamily Filarioidea and the family Onchocercidae.

HWD is widespread and can be found in North America, South America, Europe, Asia, and Australia.4,5 New models have been developed to predict HWD prevalence in dogs based on several factors (climate, geography, and society) and help in predicting outbreaks in the United States. The southeastern US has an exceptionally high risk of infection, but infections are described in all of the lower 48 states.6

Infections with D immitis in ferrets are described in laboratory settings with a susceptibility of 100%.7 Multiple cases of HWD in client-owned ferrets have been reported; however, compared to cats and dogs, there is not as much data regarding prevalence and susceptibility for HWD in ferrets.8 Housing a ferret outside is not recommended in areas where heartworm prevalence in cats and dogs is high. Even housing a ferret indoors 100% of the time is not a guarantee that it will avoid infection. One study found that about 25% of indoor cats have HWD.9 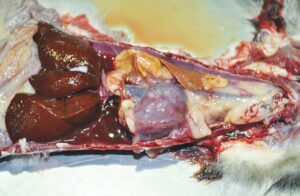 FIGURE 2. A necropsy of a ferret affected with Dirofilaria. Note the globoid shape of the heart. Image courtesy of pathology service at UGA.

Bilirubinuria is a frequently described sign. In a study of clinical observations of naturally occurring HWD in ferrets, bilirubinuria was observed in 83% of the cases.10 A rare case of an aberrant larval migration infesting the subdural space of the cranial cavity was reported in Europe in 2010.11

HWD may be misidentified in ferrets. A study in 2008 showed HWD was diagnosed in 11 black-footed ferrets using an antigen-based enzyme-linked immunosorbent assay (ELISA). Polymerase chain reaction (PCR) amplification of the 5S spacer region of rDNA of the filarial sequences showed only 76% conformity with D immitis; it was reported that the population was infected with an undescribed filarial species.12

The life cycle of D immitis is 210 to 270 days. Female mosquitos can be infected with microfilariae during feeding on an infected host. After ingestion, the microfilariae transform into first-stage larvae (L1). Depending on temperature, L1 molt into infective third-stage larvae (L3) within about 10 to 14 days. The infective L3 are deposited on the skin of a potential host by the feeding mosquito. They enter the subcutaneous tissue of the host through the bite wound and, after a few days, transform into fourth-stage larvae (L4).

The L4 migrate through the subcutaneous and muscle tissue toward the thorax, where they molt to juvenile worms 50 to 70 days postinfection. The immature worms enter the bloodstream via peripheral veins and finally infest the pulmonary vasculature. A mean duration of 70 days after inoculation has been described for this migration. The juvenile worms reach maturity in the pulmonary arteries 180 days after infection. Mating takes place in the pulmonary arteries, and microfilariae are found in circulation at approximately 180 to 210 days after initial infection.3 Ferrets can be severely affected by a low heartworm burden of 1 to 2 adult worms.13

Results of tests using antigen detection of a glycoprotein secreted by female heartworms will be falsely negative in the case of a male-only infection. Screening by blood test is not reliable in ferrets; symptomatic animals should be radiographed to evaluate the cardiac silhouette as the first step (FIGURE 3). A biochemistry profile and a complete blood cell count should always be performed. Changes commonly seen include elevated liver enzymes, azotemia, bilirubinemia, eosinophilia, basophilia, neutrophilia, nonregenerative anemia, and thrombocytopenia.3 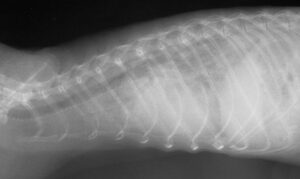 If D immitis microfilariae are observed on a blood smear (FIGURE 4), the diagnosis of HWD is definitive. However, the Difil (Vetoquinol.com) or modified Knott’s test can have false-negative results owing to the normally low levels and transient nature of the microfilaremia in ferrets. 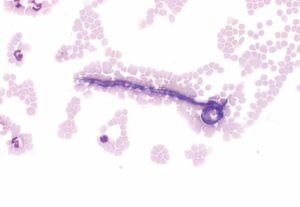 Housing a ferret outside is not recommended in areas where heartworm prevalence in cats and dogs is high. Even housing a ferret indoors 100% of the time is not a guarantee that it will avoid infection. In addition to medical prevention of HWD, housing the ferret in a mosquito-free environment is highly desirable.

Molecular genetic structures can be detected on PCR.3 D immitis can be observed via echocardiography as abnormal hyperechoic structures in the right atrium and/or right ventricle.14 Nonselective angiography provides a sensitive method of detection of adult heartworms in the cranial vena cava.15

Once the patient is stable, the decision to pursue a surgical approach or medical management must be made (TABLE 1). All the published treatment options in ferrets consist of extralabel protocols. Alleviation of clinical signs with prednisone 0.5 mg/kg PO q12h can be elected if the patient is not stable enough for more invasive treatment.14

Successful transvenous extraction of adult heartworms has been described in a 10-month-old ferret.16 After the surgery, the patient was medically managed with corticosteroids and a monthly heartworm preventive.16

If a more conservative approach is warranted, different protocols have been studied. Protocols using melarsomine 2.5 to 3.25 mg/kg IM have been described using a 2- or 3-injection protocol similar to that used in treating dogs. To prevent pain associated with the injections, sedation or anesthesia of the patient is necessary. Strict cage rest is indicated after treatment, as there is a high risk of thromboembolism.

Long-term treatment with moxidectin is described to be associated with fewer risks and can result in antigen-negative patients. In a study performed on 10 naturally infected ferrets, moxidectin was used at a dose of 0.17 mg/ferret SC, and 4 ferrets were reported to be antigen-negative after treatment.17 Because of the small sample size, we hesitate to recommend this protocol as a successful treatment option before further investigation has been performed. However, the longer course of treatment may result in greater endothelial damage from the prolonged presence of the parasites.18

In addition to medical prevention of HWD, housing the ferret in a mosquito-free environment is highly desirable.1

D immitis resistant to macrocyclic lactones have been described in the US Mississippi Delta.5 Therefore, patients receiving macrocyclic lactones to treat HWD should be screened annually for circulating microfilariae.3 However, since circulating microfilariae are not always present in an infected ferret, this screening method must be used with caution.

The diagnosis and management of HWD in ferrets is not as straightforward as in dogs and cats for a variety of reasons. Unfortunately, there are fewer data available for ferrets regarding management of this life-threatening disease, and we hope more data will become available from cases managed in different clinics across the country.

As with other pets, prevention of HWD is recommended. Although the vast majority of ferrets are housed indoors, a preventive approach should be implemented year-round, especially in endemic areas.

Leonie Kondert, DVM, served as a Zoo and Exotic Medicine intern at the University of Georgia. Dr. Kondert received her DVM from the University of Veterinary Medicine in Vienna, Austria and successfully completed the ECVFG exam. She also completed one year of training in Zoological Pathology at the Research Institute of Wildlife Ecology and worked three years with small animals in private practice. Her research interests include small mammal medicine and surgery.

Joerg Mayer, DVM, MS, DABVP, DACZM, received his doctoral degree in veterinary medicine from the University of Budapest, Hungary. He moved to the United States for an internship in zoological medicine and surgery at the Roger Williams Park Zoo in Providence, Rhode Island. Dr. Mayer then attended the Royal Veterinary College in London, England, to study for his master’s degree in wild animal health. After 10 years at Tufts University as the head of the clinical service for exotic animals, he became an associate professor in zoological medicine at the University of Georgia. He lectures regularly at national and international conferences on all aspects of exotic animal medicine, and he has published many scientific articles and book chapters, some of which have been translated into French, Spanish, and Portuguese.