In this case report, a novel surgical approach is required to resolve obstruction caused by nasal cuterebriasis.

Dr. Hecht is a graduate of Ludwig Maximilian University in Munich, Germany, where she also completed an internship, obtained her DMV, and served as a clinical instructor. She completed a residency in diagnostic imaging at the Cummings School of Veterinary Medicine at Tufts University. Dr. Hecht is the editor and coauthor of a German textbook on veterinary radiology and has contributed more than 80 peer-reviewed publications. She is currently a professor of radiology at the University of Tennessee College of Veterinary Medicine.

Cuterebriasis is a parasitic disease that is uncommonly reported in cats.1 Typical presentations include cutaneous warbles (focal swelling of the skin and subcutaneous tissue with breathing holes for enclosed larvae) or signs of upper respiratory disease from larval migration.2-4 Treatment usually involves nonsurgical extraction of the larva and supportive care.4 Prognosis is good if the larva can be easily extracted; however, death can occur with structural damage, severe respiratory compromise, or systemic inflammatory response syndrome.4 This report documents surgical treatment of a cat with bone damage, upper airway obstruction, and hiatal hernia after nasal cuterebriasis.

A 1-year-old female intact domestic shorthair cat was presented to the University of Tennessee Veterinary Medical Center with a 9-month history of stertor, stridor, and inspiratory dyspnea and a 5-month history of intermittent vomiting. As a young kitten, the cat was diagnosed with nasal cuterebriasis; a larva was successfully extracted from the right nostril, but the surrounding structures subsequently deformed and collapsed.

On physical examination, the cat had increased inspiratory and expiratory effort, stertor, stridor, and a nasal deformity (FIGURE 1) that included inversion and stenosis of the tissues surrounding the right naris; stenosis and rightward deviation of the philtrum, left naris, and remaining nasal planum; and a palpable bone deficit in the region of the rostral right nasal bone. The cat was undersized, with a body weight of 2.37 kg (5.22 lb). 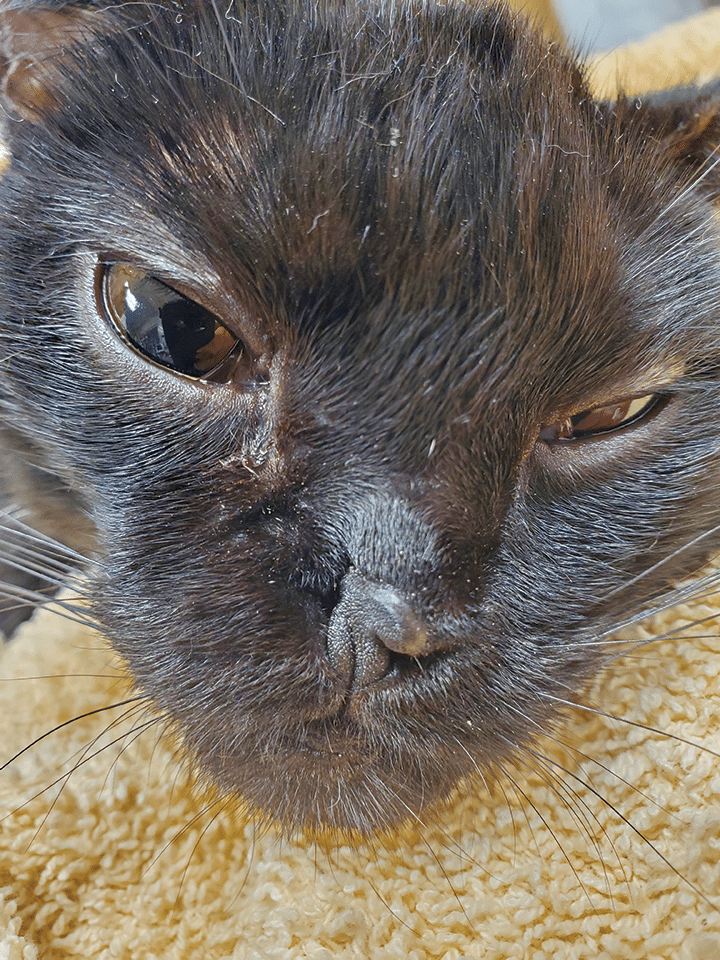 On survey thoracic radiographs, the heart and lungs were normal. A soft tissue opacity in broad-based contact with the diaphragm was noted in the caudal thorax (FIGURE 2), and the intra-abdominal portion of the stomach was shifted slightly cranially and to the left; findings were consistent with a hiatal hernia. The cat was anesthetized for computed tomography (CT) of the head and possible surgery. 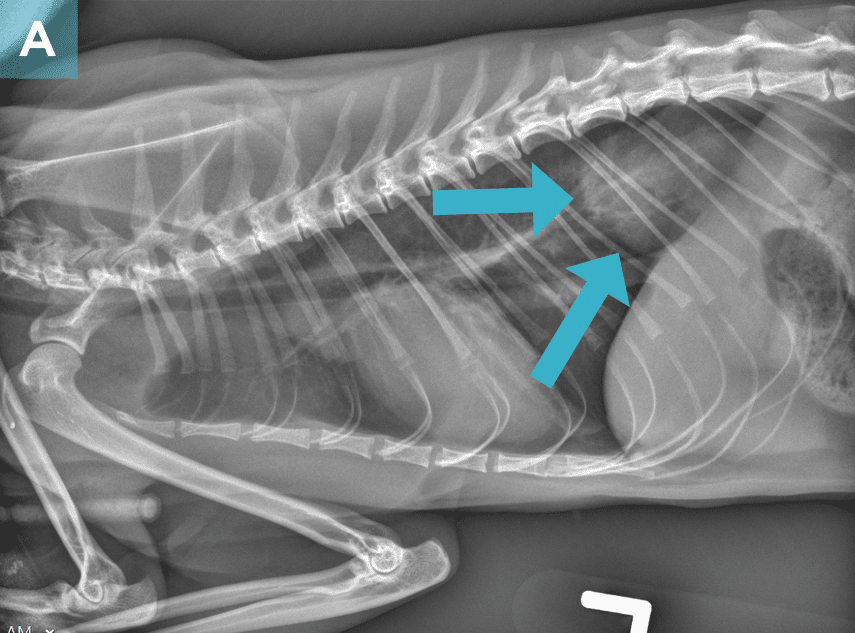 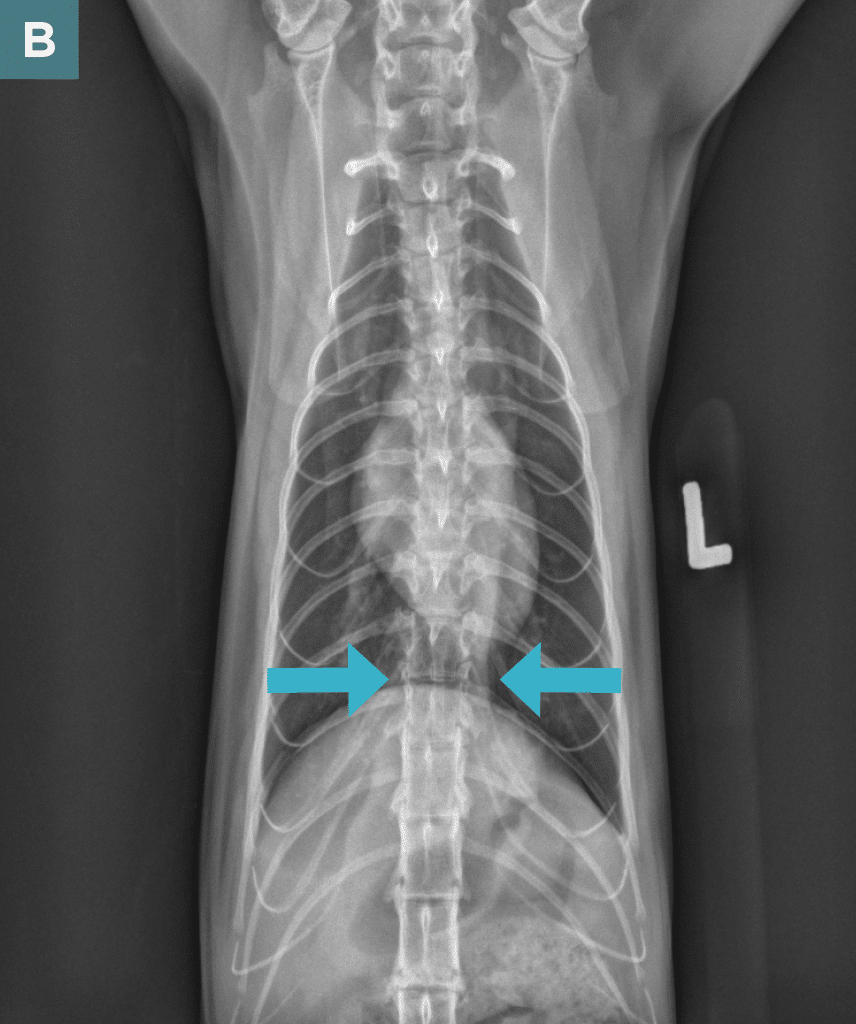 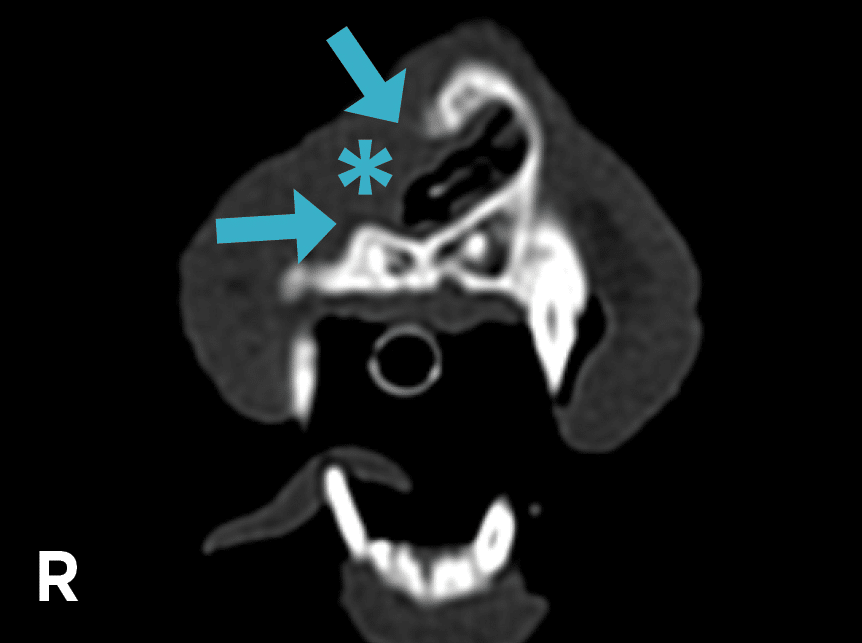 The cat was taken to surgery for abdominal exploratory and right nasal reconstruction. The cat was first positioned in dorsal recumbency, and a midline celiotomy was performed. The entire stomach was located in the abdominal cavity, but the distal esophagus, fundus, and proximal portion of the gastric greater curvature were thickened and white, with a finely cobblestoned surface (FIGURE 4). To treat the sliding hiatal hernia, the esophageal hiatus was narrowed with interrupted 3-0 polydioxanone sutures placed in the dorsomedial margins of the right and left pars lumbalis, and an esophagopexy was performed along the ventral and lateral borders of the phrenicoesophageal junction. An ovariohysterectomy was also performed before routine abdominal closure. 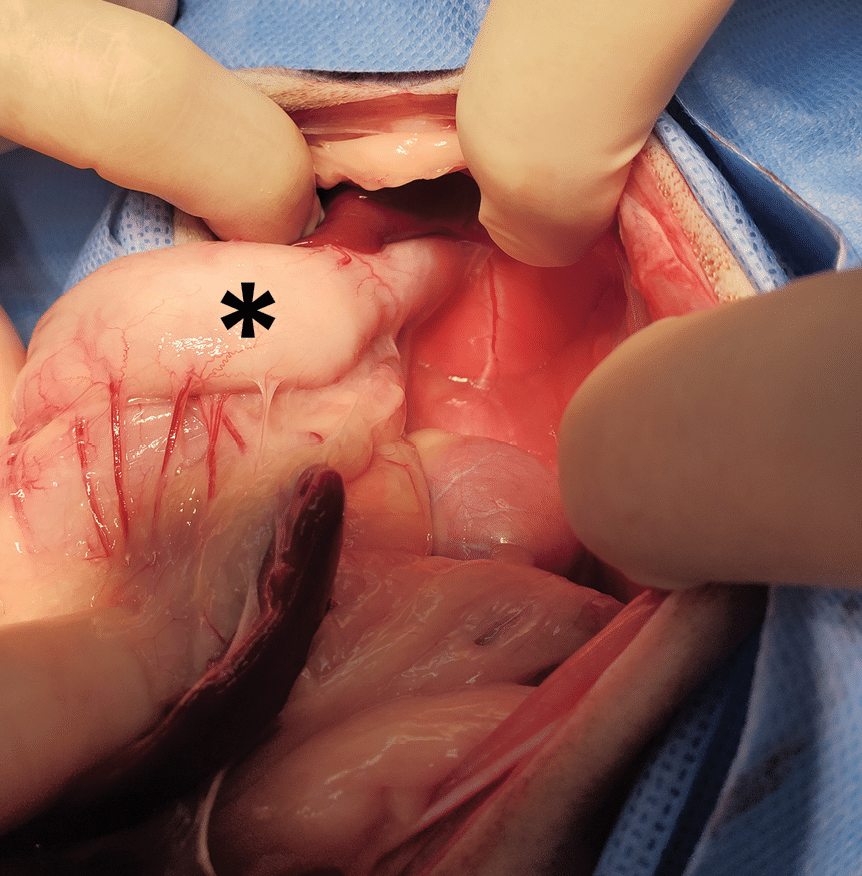 The cat was then positioned in sternal recumbency (FIGURE 5). The right nasal passage was opened by resecting overlying skin and subcutaneous tissue (FIGURE 6). The nasal philtrum was transected ventrally, elevated, and temporarily tacked dorsally with an interrupted stay suture to expose the deviated nasal septum (FIGURE 7). 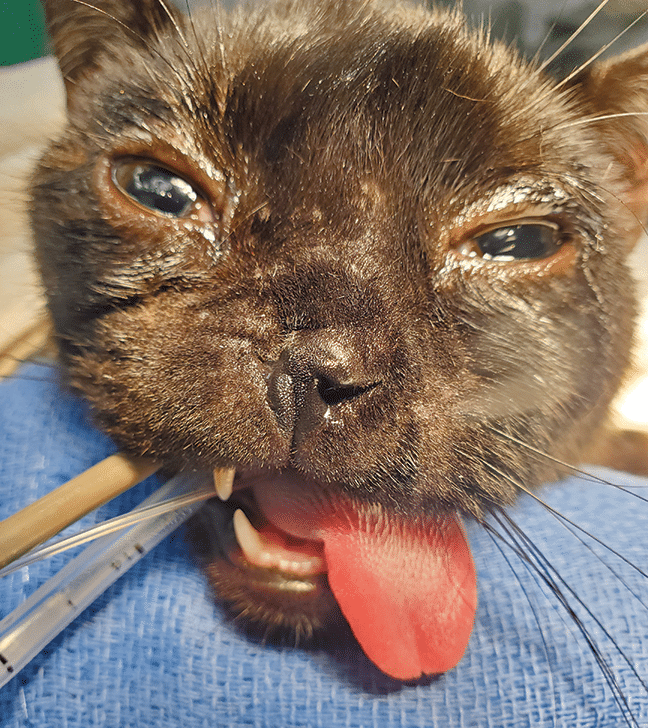 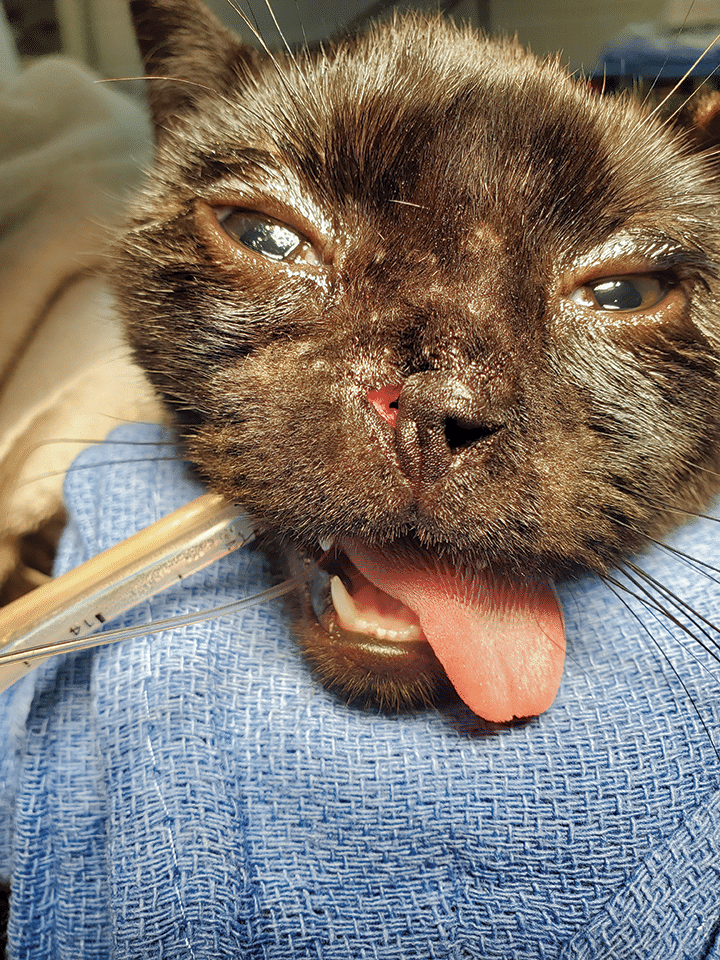 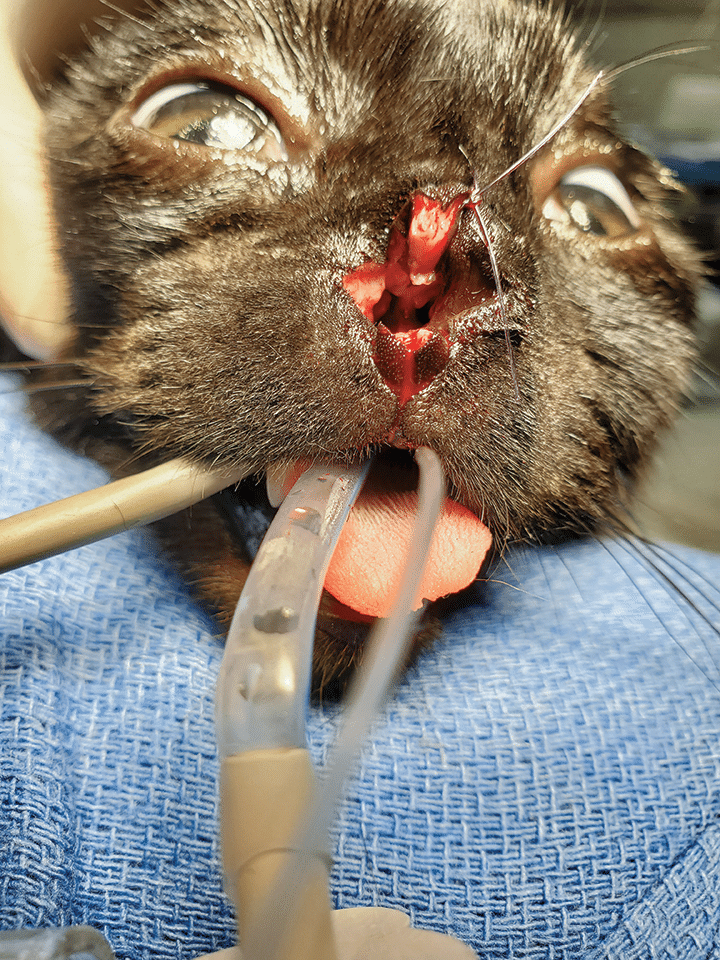 The rostral portion of the septum and turbinates were resected with rongeurs to remove the deviated septal segment and enlarge the nasal cavity (FIGURE 8). The stay suture was released, and the dorsal portion of the philtrum was rotated to the right and sutured to the right dorsolateral wound margin of the new nasal passage with simple interrupted sutures of 3-0 polydioxanone (FIGURE 9). Along the ventral margin of the new nasal passage, nasal epithelium was sutured to external epithelium with simple interrupted sutures of 3-0 poliglecaprone 25 (FIGURE 10). 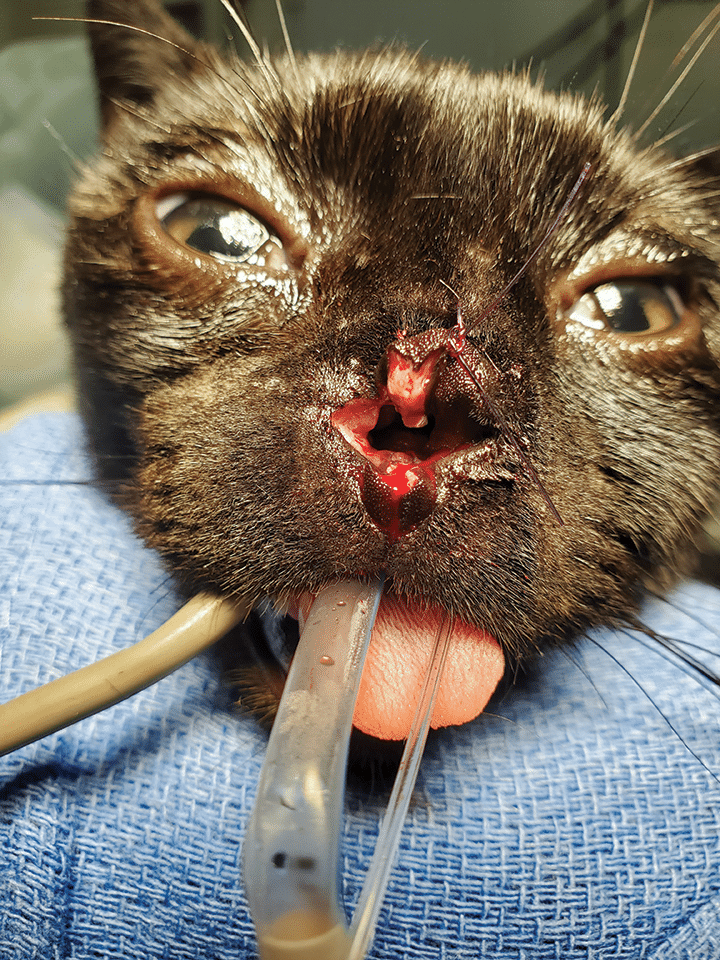 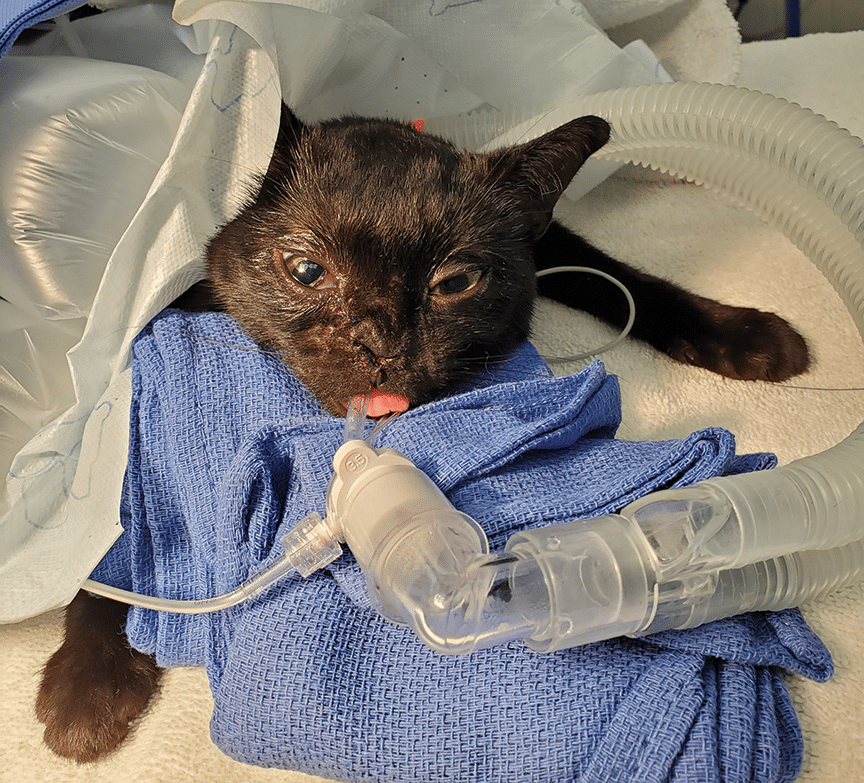 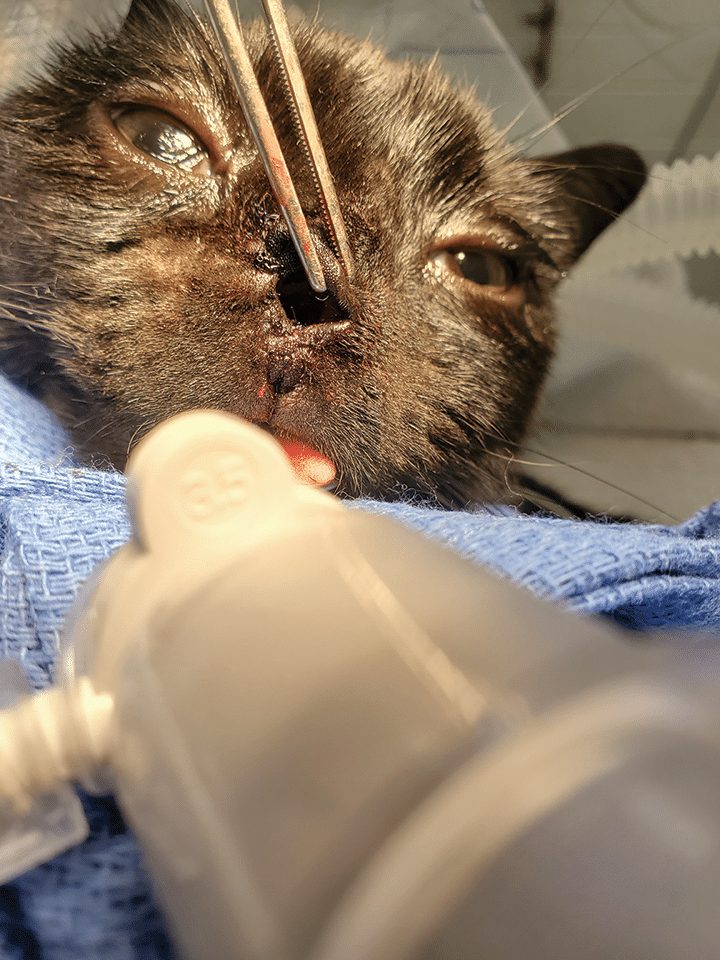 The cat was recovered in the intensive care unit; upon anesthetic recovery, stertor and stridor had resolved and the cat was breathing comfortably (FIGURE 11). The cat was eating well within 6 hours after surgery and was discharged from the hospital 12 hours later with instructions to keep the cat in an Elizabethan collar for 4 weeks. At the 1-month recheck, all respiratory and gastrointestinal signs had resolved, and the cat had gained weight and grown in size (FIGURE 12). 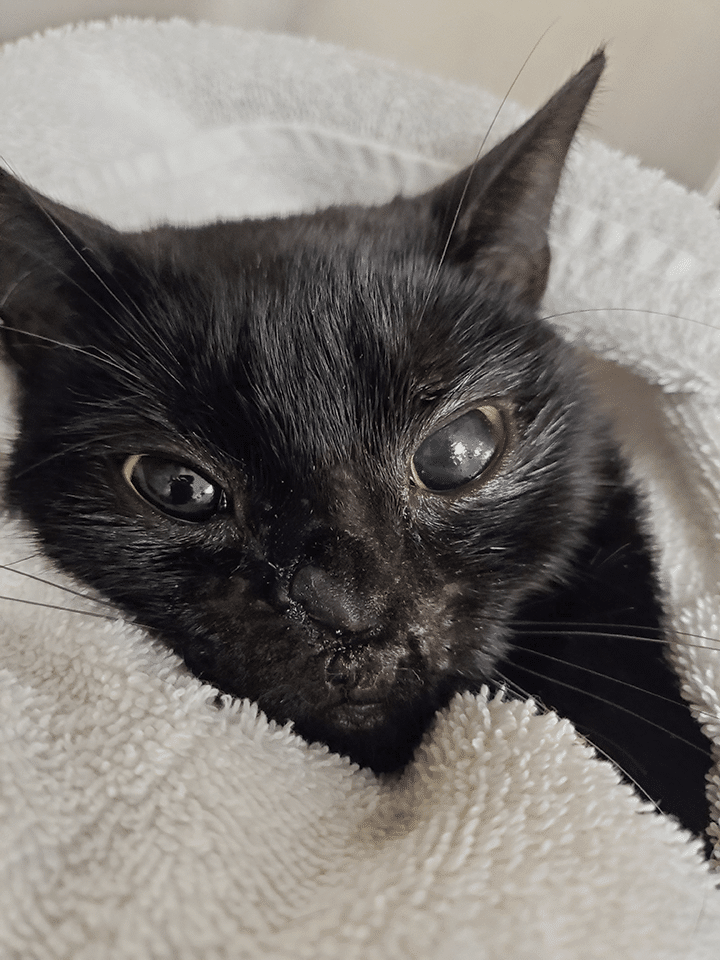 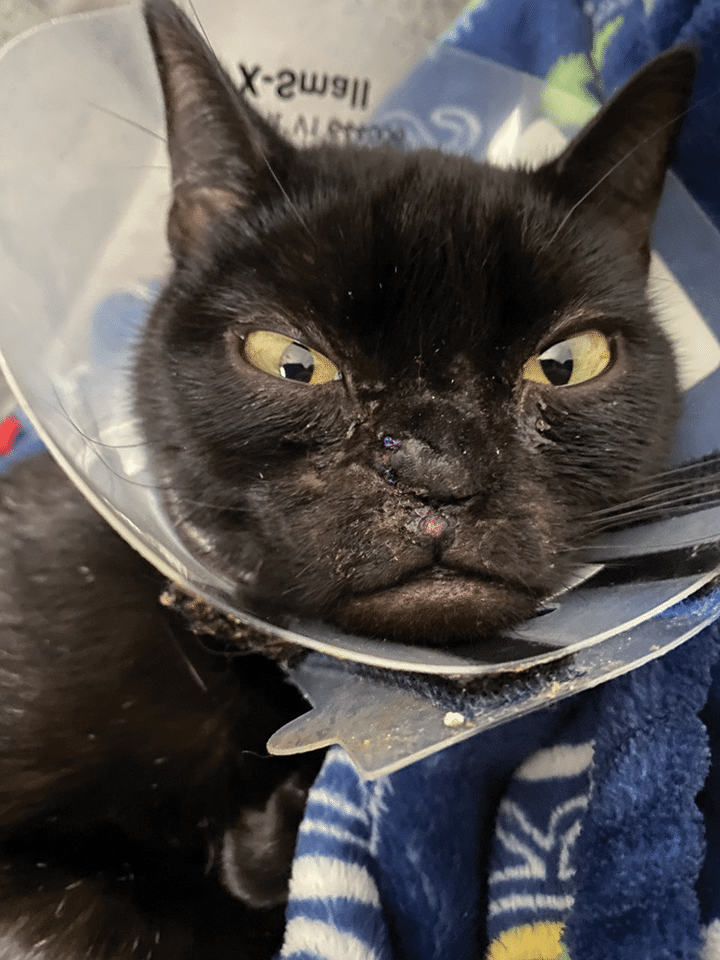 This is the first known case report of nasal deformity and secondary hiatal herniation after juvenile cuterebriasis in a cat. Cuterebra fly larvae usually enter their hosts through the eyes, mouth, nasal cavity, or a wound and then migrate through the body to reach subcutaneous tissues, where they form a swelling or abscess in which they molt into third-stage instars.4 In the United States, typical hosts include rabbits and rodents; in atypical hosts, aberrant migration can occur.4 Reported sites of aberrant migration in dogs and cats include the eyes, central nervous system, trachea, nasal cavity, oropharynx, ear canal, thorax, abdomen, and gastrointestinal and urogenital tracts.1,4 Clinical signs of respiratory cuterebriasis include epistaxis, sneezing, nasal discharge, dyspnea, cyanosis, stridor, gagging, and coughing.1,4 Larvae release toxins to destroy host tissue, and progressive destruction occurs as the larvae enlarge.5 Treatment includes larval extraction and supportive therapy for associated conditions such as infection, swelling, or anemia.

In humans, rare cases of nasal myiasis have resulted in nasal septal deviation, mucosal and turbinate thickening, and erosion of the bony nasal septum and hard palate.5,6 The cat in this report developed nasal obstruction that was considered to be the underlying cause for hiatal hernia development. Hiatal hernia is an abnormal protrusion of abdominal contents, usually a portion of the stomach, through the esophageal hiatus and into the caudal thorax.7 The most common type of hiatal hernia in cats is a type I (sliding) hernia, in which the abdominal esophagus, gastroesophageal junction, and a portion of the stomach displace cranially through the esophageal hiatus into the thoracic cavity.7,8 Hiatal hernias are often congenital, but they can be associated with concurrent respiratory conditions, such as upper airway obstruction.7,9 Inspiratory dyspnea causes greater negative pressure in the pleural and intraesophageal spaces, which may result in stretching of the phrenoesophageal ligament and cranial displacement of the stomach through the esophageal hiatus.7,8,10 In one retrospective study of hiatal hernias, 29% of affected cats had concurrent airway obstruction.7

Common clinical signs of hiatal hernia in cats include vomiting, weight loss, and anorexia.7 Because hiatal hernias can be intermittent, the condition may be missed on survey radiographs but is usually evident on videofluoroscopic esophagography.7 Medical treatment for hiatal hernia includes gastric acid suppressants, prokinetics, and gastric mucosal coating agents.7 Surgical treatment includes left-sided gastropexy, phrenoplasty, esophagopexy, or a combination of those procedures.7,11 Clinical signs of hiatal hernia may improve or even resolve if upper airway obstruction is corrected.9,10,12 Because the cat in this report required ovariohysterectomy, concurrent herniorrhaphy was performed to reduce the risk of recurrence. Additionally, aberrant nasal turbinates, which were not removed in this cat, could increase the potential for continued respiratory obstruction.13

In cats, narrowing of the nasal passages can be congenital, as with stenotic nares in brachycephalic breeds, or acquired, such as with neoplasia, trauma, chronic rhinitis, foreign bodies, polyps, or fungal and bacterial infection.14-16 Extent of disease or deformity is best determined by CT.17 Treatment of rostral nasal passage obstruction in cats usually involves resection of overlying or obstructive tissues, with or without reconstruction.14,15 Stenotic nares can be corrected by alar fold amputation, wedge or punch resection and primary closure, or skin fold resection with advancement flaps.14,15,18 In cats with nasal planum neoplasia, the planum can be resected and the resultant skin margin stabilized with a purse-string suture to prevent further retraction of wound edges.19 A scab rapidly forms in the wound and is subsequently replaced by granulation tissue. Maintenance of the opening depends on epithelialization of the skin edge and deep turbinates; the final passageways are usually much smaller than the resected area.19,20 Because of the small size of the nasal opening after tissue resection and the lack of supportive bone around the site, reconstruction was elected for the cat in this report.

In dogs, approach to the rostral nasal septum through a rostrolateral rhinotomy or nasal planum elevation has been described for removal of septal squamous cell carcinoma.20,21 With both approaches, the philtrum is sutured back in place to cover the defect. Defects of the planum and philtrum can be repaired with bilateral flaps from the lower borders of the nares, which are continuations of the nasal planum, or the lip.20 Primary apposition of epithelial tissues is preferred to prevent subsequent stenosis.20 In cats, the nasal planum surrounds the dorsal and medial edges of the nares; the remaining borders are covered with haired epithelium.14 The nasal philtrum was used to reconstruct the right dorsal nasal planum in the cat in this report, and primary closure of epithelial defects prevented granulation tissue formation and airway narrowing.

In this report, a cat with obstruction secondary to damage caused by nasal cuterebriasis was successfully treated with a novel surgical approach to the nasal cavity. Respiratory and gastrointestinal signs resolved with nasal reconstruction and surgical herniorrhaphy.