The Facts About Feline Heartworm Disease 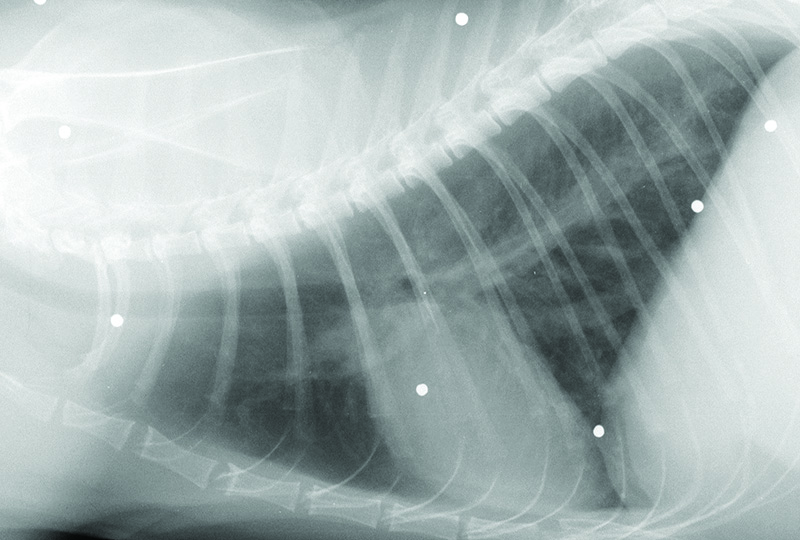 Although feline heartworm disease (FHWD) was discovered in 1922, only within the past 2 decades has it been seriously studied and become better understood. This article provides an overview of FHWD, including the latest information on disease prevalence, and discusses diagnostic testing, treatment, and recommendations for prevention.

FHWD is more widespread and common than previously thought. For many decades it was assumed that cats were resistant to infection, but we now know that this is an inaccurate view of heartworm infection (HWI) in this species.

Cats are more resistant to heartworm than dogs, but they are considered a susceptible host. While the rate of adult HWI in cats is only 5% to 20% of that in dogs,1 these numbers fail to consider the important physical effects caused by immature heartworms that die before they fully mature, and the number of cats whose infections go undiagnosed.

When adult HWIs are combined with the far more prevalent HARD, the true incidence of heartworm disease in cats is vastly greater than previously believed.3 Whether damage is caused by 9-inch adult heartworms or immature adults, it is still considered “heartworm disease” as far as the cat’s lungs are concerned. Both adult infection and HARD are clinically significant, causing significant disease and even death (in patients infected with adult heartworms) in the cat.

Read Current Feline Guidelines for the Prevention, Diagnosis, and Management of Heartworm (Dirofilaria immitis) Infection in Cats at heartwormsociety.org/images/pdf/2014-AHS-Feline-Guidelines.pdf.

Heartworm infection and disease in cats differ significantly from that seen in dogs (Table 1). While primarily considered a pulmonary vascular and secondary heart disease in dogs, in cats, the condition presents itself primarily as a lung disease. 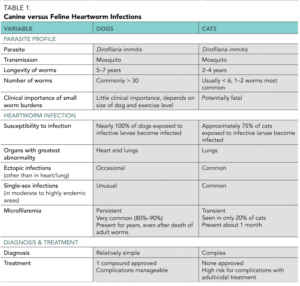 Adult heartworms can live for 5 to 7 years in dogs and 2 to 4 years in cats. Should a cat be unlucky enough to have heartworms that reach the adult stage, even 1 or 2 mature adults represent a substantial worm burden due to the large size of the worm compared with the small size of the cat.

Ectopic infections (in the brain, body cavities, eyes, and systemic arteries), although uncommon, are more frequent in cats than dogs. Same-sex infections also occur more frequently in cats and account for about 1/3 of feline infections. Unlike dogs, cats rarely have circulating microfilaria; if present, the microfilaria persist for only a short period. Therefore, the cat is considered a dead-end host.

The most common presenting signs in cats are:4

The presenting respiratory signs can easily be mistaken for asthma, bronchitis, or an infection.

The largest study to date on client-owned cats demonstrated that 28% of infected cats were asymptomatic.4 This may be due to those cats’ sedentary lifestyle—exercise is directly correlated to severity of heartworm disease in dogs.5

When the adult worm dies, the dying, fragmenting parasite worsens pulmonary inflammation and thromboembolism, often leading to fatal acute lung injury. Sudden death is sometimes the only sign of HWI in a cat, and such reactions in cats can occur from single-worm infections.

Diagnosing heartworm disease in cats is much more complicated than it is in dogs (Table 2). The American Heartworm Society (AHS) feline guidelines state: “The true prevalence of HWI in cats is probably understated due to diagnostic limitations, and the greater tendency of cats to exhibit only transient clinical signs or die without confirmation of infection.”2 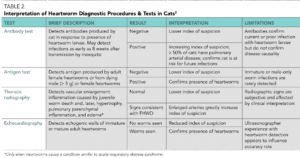 Concentrate testing (filter or modified Knott test) for microfilaria is inadequate due to limited and transient microfilaremia, higher incidence of same-sex infections, and low worm burdens. Nevertheless, approximately 10% of cats with HWI are microfilaremic, and this provides a definitive diagnosis. Therefore, when suspicion is high, a test for microfilariae is still indicated.

Serologic testing of cats for heartworm presents several challenges. No single test can accurately detect heartworms at all stages in the cat, so multiple test methods need to be used—and repeated, if infection is suspected.

Antibody Testing. The antibody test can detect larval infections with both sexes of worms—because the larvae of either sex can stimulate an early, detectable immune response—as early as 2 months after infection. However, positive antibody tests do not indicate the continued existence of an infection, only that an infection (mature or immature, transient or permanent) has occurred.2 False-negative results are a concern, because of varying sensitivities of different antibody tests.

Use of Both Tests. Both juvenile and mature adult worms cause clinical disease in the cat; therefore, both tests are useful and help facilitate an accurate diagnosis when combined.

Approximately 50% of cats with adult HWI demonstrate radiographic changes (Table 3 and Figures 1 and 2).6 However: 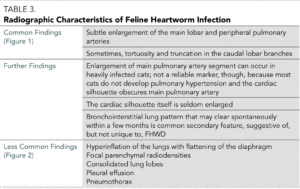 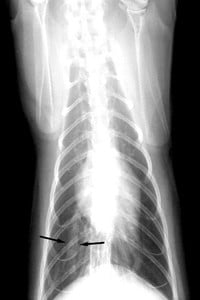 FIGURE 1. Dorsoventral thoracic radiograph from a cat with heartworm disease; pulmonary changes are not dramatic but the right caudal lobar pulmonary artery is enlarged, while the opposite pulmonary artery is somewhat tortuous. Courtesy Dr. Clarke Atkins, North Carolina State University 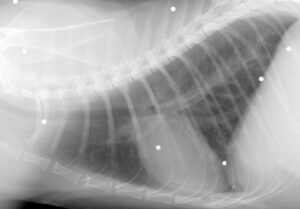 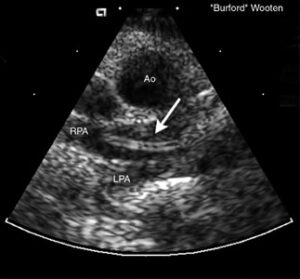 When identified, adult heartworms appear as parallel linear artifacts, commonly called railroad tracks or equal signs (Figure 3). They are found most often in the proximal main and right lobar branches of the pulmonary artery, making it necessary to methodically probe these areas.

Due to the small size of feline pulmonary arteries relative to the larger size of adult heartworms, worms are more likely to extend from the peripheral branches into the proximal segments in cats compared with dogs.2 In cats, adult heartworms (%) are detected in the:8

Of course, single adult heartworms can be seen in more than 1 chamber, simply due to their size.

No approved treatment is available for adult FHWD; in fact, melarsomine is toxic in cats at doses as low as 3.5 mg/kg.

For acutely ill cats, the best course of action is supportive care, including:

For infected cats with clinical signs and/or radiographic evidence of lung disease, prednisone in diminishing doses is recommended: The starting dose is 2 mg/kg PO Q 24 H, declining gradually to 0.5 mg/kg every other day by 2 weeks; then discontinuation after an additional 2 weeks. Treatment can be repeated if clinical signs recur.2

Diuretics are inappropriate, even for infected cats with severe interstitial or patchy alveolar lung patterns. Aspirin and other nonsteroidal anti-inflammatory drugs have failed to produce demonstrable benefit and may actually exacerbate parenchymal pulmonary disease.2

Monitoring both antibody and antigen test results periodically, along with follow-up chest radiography, is appropriate for assessing progress.

Prognosis for cats with FHWD and HWI is roughly equivalent to that of cats with hypertrophic cardiomyopathy. In a study of 50 cats with naturally acquired HWI (n = 48, with adequate follow-up), the median survival duration was 1.5 years (range, 0–4015 days).9

FHWD has been diagnosed in all 50 states and can occur wherever the disease is seen in dogs. Nevertheless, relatively few cats receive heartworm preventives because of long-held assumptions that cats are resistant to HWI and that the disease is rare.

Heartworm prevention in cats is especially important given the lack of an approved or safe and effective treatment. The AHS recommends year-round use of heartworm preventives for cats as well as dogs, and owners have the option of oral or topical monthly preventives, with varying parasite spectra. All cats in heartworm-endemic areas should receive a preventive agent because multiple studies have shown that indoor cats are susceptible to HWI.4,7,12
An added benefit to administering heartworm preventives to cats is that several products also protect cats from fleas, ticks, and ear mites, as well as zoonotic parasites, such as Toxocara and Ancylostoma species, which present a year-round threat in many areas of the country.

Until recently, conventional wisdom held that heartworm disease in cats was a relatively minor disease threat. In reality, the overall rate of positivity for feline heartworm antigens is substantial.

The inaccurate perception of low heartworm incidence rates in cats can be traced to 2 factors:

Unlike dogs, cats with heartworm exposure may develop HARD, possibly without ever acquiring adult worm infections. HARD cannot be detected with antigen tests but is thought to have a substantial effect on feline health. Redefining FHWD to include HARD and adult infections puts the disease in its proper perspective and creates a compelling argument for increased heartworm testing and routine heartworm prevention.

Robert Stannard, DVM, is the owner of Adobe Pet Hospital in Livermore, California, and is the Secretary/Treasurer of the American Heartworm Society. He received his DVM from University of California—Davis and completed the advanced laser surgery/otoscopy program. As a Registry of Approved Continuing Education (RACE) approved speaker, Dr. Stannard has been invited to speak throughout the U.S. and, most recently, Australia.