The Healing Power of Fish Skin for a Dog Named Stella 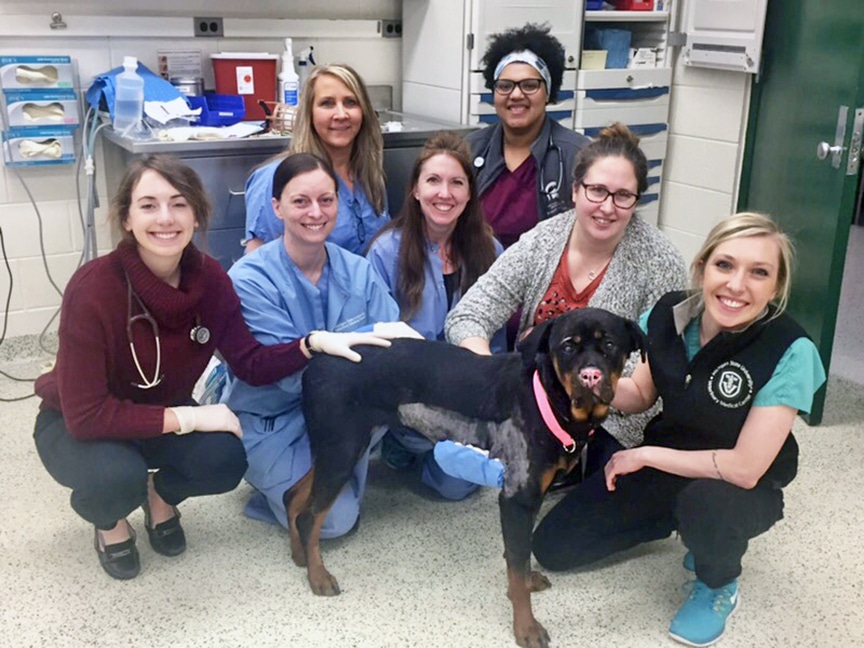 Stella, a severely burned Rottweiler, was treated with experimental fish skin. It took a team of veterinarians and veterinary nurses to monitor and heal Stella. Photo Credit: Michigan State University.

When Stella first entered the emergency department at the Michigan State University Veterinary Medical Center on a Wednesday night, Feb. 13, 2019, she had second- and third-degree burns across 10% of her body.

Stella, a 1-year-old female Rottweiler, had miraculously escaped a house fire in Lansing, Michigan, while her owners were away. Although lucky, she didn’t escape burns across her head, nose, ears, hind end and sides of her body, as well as severe smoke inhalation and respiratory problems. She also developed ulcers and scarring in both eyes due to fire exposure. 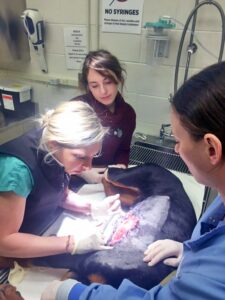 Multiple disciplinarians had to work together on Stella due to the vast majority of injuries she acquired. Photo Credit: Michigan State University.

For two weeks, she fought for her life.

“Stella’s will to live was amazing; she never quit fighting,” said Rose Wahl, one of the licensed veterinary technicians who was there when Stella arrived. “Her resilience and strength have astounded everyone who has worked with her.”

The immediate threat for Stella upon arrival was the trauma and thermal injuries to her trachea and lungs. So, she was put on intravenous, or IV, fluids and pure oxygen to help her breath. Once stabilized, the MSU soft tissue surgery team went to work, while ophthalmologists cared for her eye injuries

“We had to get creative with her burns because of the significant trauma to Stella’s lungs,” said Brea Sandness, a veterinarian and surgical resident at MSU. “She wasn’t a great candidate for anesthesia because of her respiratory injuries.”

That’s when the surgical team turned to a less traditional method – using Icelandic, descaled cod fish skins donated by Kerecis, a company developing fish-skin products for use in burn and other medical procedures in humans and animals. 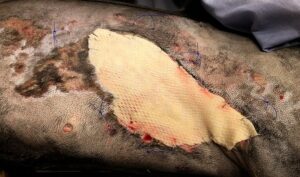 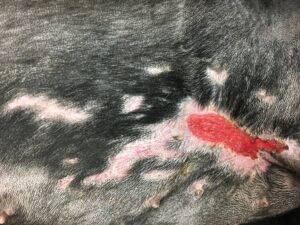 Because of the makeup of the tissue and high omega-3 fatty acids in the cod skin, these grafts have anti-inflammatory and antibiotic properties, important for healing and tissue regeneration. They don’t require heavy sedation, either.

“We were able to place them on her with minimal sedation, which not only allowed us to heal her without additional stress to her lungs, but improved the way her burns healed,” Sandness said.

The descaling of the cod skins is what differentiates them from other fish grafts, such as tilapia. While scaled tilapia grafts, which gained national attention during the California wildfires earlier this year, are effective, they act more as an organic covering while the skin underneath heals itself.

According to Sandness, descaled grafts have been shown to stimulate the production of cells and become functional, living tissue. In Stella’s case, these grafts, which can be changed as often as the burn requires, were absorbed by her body as new tissue grew into the graft.

Today, Stella is back to being a relatively active pup. But even though her burns are healing well, she still struggles with respiratory issues that will likely need close monitoring and care throughout her life. 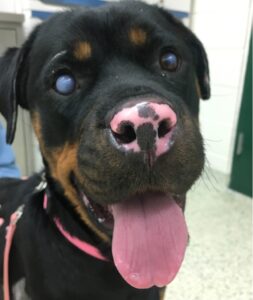 A happy, healthy Stella thanks to the team at MSU. Photo Credit: Michigan State University.

“Stella is one of the bravest and strongest patients I’ve ever encountered,” Wahl said. “Not only did she show incredible endurance and resilience, she has maintained a sweet and kind attitude throughout this whole ordeal.”

Sandness added that beyond her lovable personality, Stella’s case, which will be presented at the Society of Veterinary Soft Tissue Surgery convention in June, will help inspire discussions of using fish grafts in the veterinary medical field, potentially helping other animals who have experienced what Stella has.

“Stella’s case is an inspiration, and her grafts have the potential to be a new and highly effective treatment tool in the veterinary profession,” Sandness said. “She’s a living example that the fire within her burned stronger than the fire that injured her.”

This article was reprinted with permission by Sarina Gleason from msutoday.msu.edu/news.

Interested in more emergency and critical care veterinary medicine? Check out the archives section of our website.