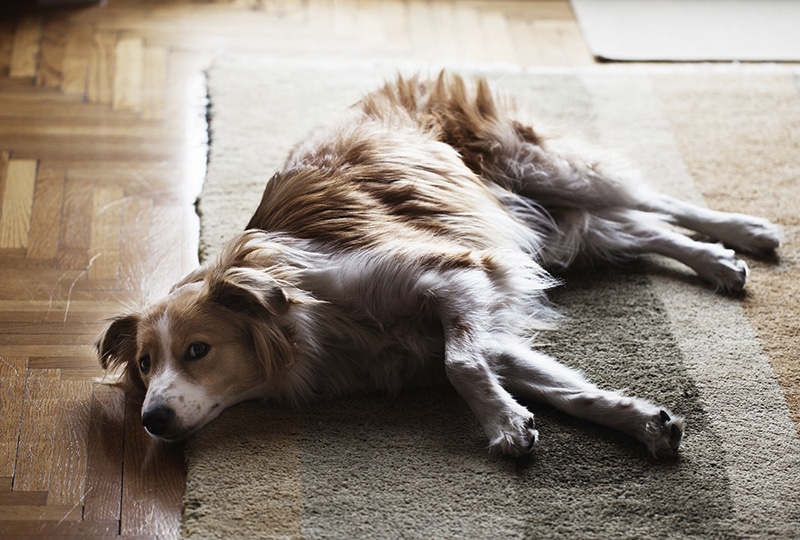 Status epilepticus (SE) is characterized by epileptic seizures that continue for more than 5 minutes, or the occurrence of more than 1 seizure within a 5-minute period in which the human or animal does not return to “normal” in between seizures. Some seizures may last 20 to 30 minutes or longer.

The official definition—as defined by the International League Against Epilepsy—is a seizure that shows no clinical signs of arresting after a duration encompassing the great majority of seizures of that type in most patients, or recurrent seizures without resumption of baseline central nervous system function interictally.

Nearly 60% of epileptic dogs will—at some point in their lifetime—experience one or more SE events.1 The prognosis for dogs with SE is quite poor—up to 25% of affected dogs will not survive to hospital discharge.1 Moreover, the life span of epileptic patients with SE is drastically shortened compared with the life span of epileptic patients experiencing other types of epilepsy (ie, 3-year difference).2 Therefore, SE creates much concern among clinicians and pet owners alike.

Cluster seizures may be a precursor of SE, and are defined as 2 or more seizures within 24 hours. However, they differ from SE because, during cluster seizures, patients regain consciousness, or return to baseline central nervous system function, between seizures.2

SE may be classified as either convulsive or nonconvulsive. Convulsive SE is the classic tonic-clonic seizure presentation, where first muscles stiffen, then the body begins to rhythmically jerk. SE is defined as nonconvulsive if patients do not regain consciousness within 30 minutes to an hour after a seizure, but are still experiencing subclinical cerebral seizure activity. Nonconvulsive SE is characterized by the presence of a stuporous, unresponsive state rather than active convulsions. Electroencephalography (EEG) may show epileptiform activity, even if the patient does not appear to be in a classic seizure-like state (Figures 1 and 2). 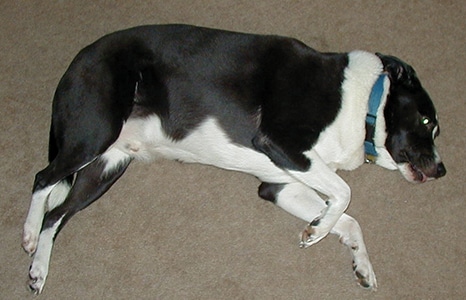 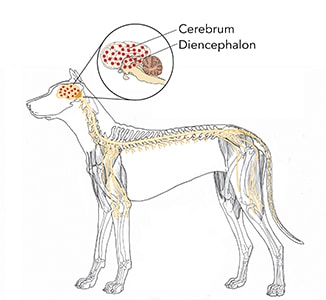 FIGURE 2. Seizures originate in the forebrain (cerebrum and diencephalon); the dots highlight these areas of the brain and suggest possible locations for lesions that might cause SE. Reproduced with permission from Chrisman CL. Neurology for the Small Animal Practitioner. Jackson, WY: Teton NewMedia, 2003.

When seizures occur, functional abnormalities of neuronal cell membrane ion pumps (such as sodium-potassium ATPase and Ca2+ ATPase) cause an imbalance of the intracellular and extracellular concentrations of potassium and calcium, which leads to depolarization. Neurons become more excitable, which allows the seizure to spread more easily. When SE develops, excessive excitation occurs and inhibition, which would stop an isolated seizure event, fails.2

SE has 2 separate phases: early and late; then, the patient enters the maintenance or self-sustaining phase of seizure activity.

Typically, the early phase occurs in the first 30 minutes:

The late phase occurs during the latter portion of an SE event, after the 30-minute mark:

Once the patient reaches the maintenance or self-sustaining phase, a certain amount of neurologic damage has occurred and spontaneous resolution of the seizure becomes less likely. As SE progresses, hyperexcitable networks are enhanced and the seizure becomes more difficult to treat, garnering a poorer prognosis.

In patients with SE, the essential goals for the veterinary team are to:

Currently, there are no FDA-approved drugs specifically for SE in either human or veterinary patients. Instead, standard anticonvulsant and anesthetic drugs are used IV to end seizure activity.

As in most emergency situations, when a patient experiencing an SE episode is presented, the veterinary team should:

It is critical to act quickly because neurologic damage continues to occur until seizure activity is ended.

At the time of IV catheter placement, it is beneficial to obtain a blood sample to perform an initial evaluation of blood glucose and electrolytes, which assists in ruling out a metabolic cause of seizures. Obtaining a packed cell volume/total solids is also ideal to help guide fluid therapy. A brief physical examination should evaluate airway patency, pulse quality, and rectal temperature.

Diazepam is typically administered via the IV route. If IV access is not possible, diazepam can be delivered rectally or intranasally, but it may have variable efficacy via these alternate routes. With regard to rectal administration, the presence of feces, extensive first-pass hepatic metabolism, ejection of the drug, and unpredictable absorption may contribute to lower efficacy.3

Effective vascular access must be established, if necessary, by surgical cut-down or by placement of an intraosseous catheter. If there is no response to IV diazepam after 1 to 2 doses, another AED may be chosen.

Levetiracetam is usually the next AED of choice and can be administered via IV, SC, or IM routes. This drug has less profound sedative effects than diazepam, and may be a better option for patients already in a dull state.2 Because levetiracetam is not metabolized by the liver, it is a safer drug for patients with hepatic compromise. However, it is excreted through the renal system, and patients with kidney disease may not be prime candidates for its use.

Lorazepam and midazolam are other options for AED therapy. Although more expensive, lorazepam tends to provide longer lasting seizure control compared with diazepam. 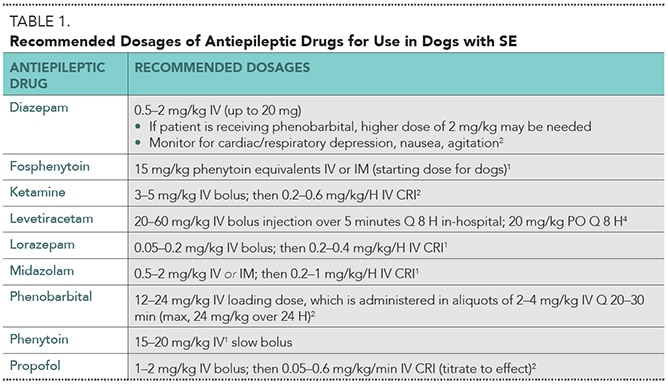 Ongoing Antiepileptic Drug Therapy
Once the patient is stabilized, long-term anticonvulsants can be initiated to prevent recurrence of seizure activity in the coming hours.

= Dose (mg) of phenobarbital to administer

The total calculated dose is divided into 4 to 6 aliquots, which are given no more than every 30 minutes. If the patient becomes excessively sedated, the subsequent aliquot can be skipped or delayed.

If the patient continues to seizure despite administration of benzodiazepines, levetiracetam, and phenobarbital, the following drugs can be added to therapy:

In some cases of SE, the client cannot bring the patient to the hospital quickly enough for management and must administer antiepileptic therapy at home prior to transport to the clinic. Note: For safety, clients should never give oral medications to an animal having seizure activity.

The stabilization process involves many other elements in addition to control of seizure activity (Table 2).

Blood Pressure. Because hypertension, and then hypotension, is common in these patients and can worsen with addition of AEDs, monitor blood pressure at least every 1 to 2 hours while the patient is sedated, more frequently if it becomes abnormal, and maintain systolic blood pressure between 100 and 150 mm Hg.

Technicians should be aware of the Cushing’s reflex in these patients: if hypertension is noted alongside bradycardia, it raises concern for presence of high intracranial pressure. In hypotensive patients, hypertonic saline may be considered at 4 mL/kg over 10 minutes. Administer a balanced electrolyte replacement solution at a maintenance rate or, if needed to treat hypotension, at a higher rate.

Temperature. Patients often are hyperthermic, and body temperature should be regulated, if possible. If the patient has a temperature higher than 104°F, begin passive cooling, and monitor rectal temperature every 15 minutes; end cooling efforts once the patient’s temperature reaches 102°F. Hypothermia may occur in heavily sedated animals once seizure activity stops, and warming may be needed at that time.

Respiration. Patients with SE may be heavily sedated while receiving AED therapy and, therefore, have difficulty protecting their upper airways. Assess gag reflex every 15 to 20 minutes if the patient is unresponsive. If the gag reflex is insufficient or absent, it may be necessary to intubate these patients to help prevent and treat hypoxemia and protect the airway from aspiration. In intubated patients, carbon dioxide (CO2) should be monitored using end-tidal capnography or blood gases.

Note: Nasal oxygen should not be administered because it may increase intracranial pressure.6 For conscious patients, a face mask, oxygen cage, or flow-by method can be used to administer oxygen. If patients are unconscious and have lost their gag reflex, oxygen is most safely and effectively provided via an endotracheal tube.

Oxygenation should be monitored by the arterial blood gas PaO2 or SaO2, which indicates the level of oxygen saturation of hemoglobin. Pulse oximetry can be monitored cageside as an additional continuous indicator of oxygenation levels.

Sodium abnormalities, along with hypocalcemia and hypoglycemia, can occur. During treatment of electrolyte imbalances, monitor heart rate and rhythm via electrocardiography, paying close attention to whether bradycardia is present. Cease treatment and contact a clinician if bradycardia occurs.

Sodium. Sodium should be corrected slowly to avoid contributing to neurologic deficits. In patients with hypernatremia, serum sodium levels should be lowered at a rate of 0.5 to 1 mEq/L/H, as cerebral edema may occur if plasma sodium levels change too quickly.

Administer hypotonic IV fluids to provide free water, diluting the high plasma sodium. If hypernatremia has existed more than 24 hours, perform correction at a slower rate. In rare cases of hyponatremia, 3% saline may be utilized, and the rate of correction should not exceed 0.5 mEq/L/H.

Plasma sodium should be monitored initially every 2 to 4 hours, to ensure that the correction rate is appropriate and allow adjustment of fluid dose and rate, if necessary.

Calcium. Hypocalcemia can be treated by slow administration of 10% calcium gluconate, 0.5 to 1.5 mL/kg IV over 10 minutes.

Glucose. Hypoglycemia is often treated with slow administration of a bolus of 50% dextrose, 1 mL/kg diluted to 25%, over 15 minutes. To avoid adverse effects of hyperglycemia, such as contributing to neuronal injury, administer thiamine, 20 to 59 mg/animal IM, prior to administration of dextrose.2

Protecting the brain during stabilization is vital, as SE can lead to such sequelae as cerebral edema, neuronal necrosis, and increased intracranial pressure.

Other nursing care advised for patients with SE includes:

Once the patient is stabilized, further diagnostics, such as EEG and magnetic resonance imaging (MRI), may be pursued.

EEG should be considered the gold standard for diagnosis of patients with SE. In particular, it is useful for:

Patients in nonconvulsive SE—rather than presenting with a classic grand mal seizure—may instead present in a stuporous and/or unresponsive state or have subtle twitching. Additionally, when patients have received multiple drugs to control SE, as they awake, it may be difficult to distinguish recurrence of seizure activity from normal sedative recovery. Investigation with EEG can help better diagnose these patients and lead to correct treatment.

MRI and computed tomography can help determine structural damage as a cause or consequence of seizure activity. On MRI, lesions can appear within the piriform/temporal lobes as a result of SE, but once a patient is seizure-free, they resolve within 10 days to 18 weeks.2

Blood analysis is also an important diagnostic tool in patients with SE.

Although SE cases can be intensive and difficult to manage, it is important for technicians and supportive veterinary team members to implement the necessary nursing care.

Oriana D. Scislowicz, BS, LVT, is Team Leader of CVCA Cardiac Care for Pets, Richmond, Virginia. She currently serves on the editorial advisory board of Firstline, and has served on the executive board of the Virginia Association of Licensed Veterinary Technicians. Ms. Scislowicz writes for publications, such as NAVTA Journal, Firstline, VetTechLife, and Today’s Veterinary Practice. She received her BS in psychology from Virginia Commonwealth University and her AAS in veterinary technology from Blue Ridge Community College.