Learn how to use these versatile skin flaps to cover large open wounds.

Dr. Smeak is a professor and Chief of Surgery at Colorado State University. His research interests include development and assessment of innovative methods to train students and residents in core surgical skills, as well as investigating a wide range of soft tissue surgical conditions. He remains active in the soft tissue surgery specialty practice at his institution, and he enjoys delivering interactive continuing education lectures and wet labs to veterinarians worldwide.

The caudal superficial epigastric (CSE) flap is a highly versatile axial pattern skin flap that can be used to cover large open wounds (Figure 1) on the: 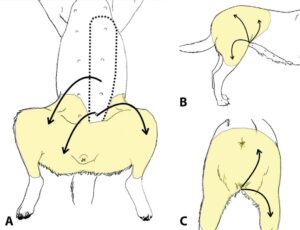 FIGURE 1. Schematic ventral view of a dog demonstrating CSE flap margins (dotted lines); the yellow region denotes range of skin defect coverage and arrows highlight the arc of flap rotation into various regions of the body (A). Lateral (B) and caudal (C) views, with skin defect coverage highlighted in yellow.

In dogs with greater body length-to-limb length ratios (such as basset hounds) and cats, this flap can extend to cover wounds as distal as the metatarsus.

The NAVC and Today’s Veterinary Practice have partnered together to present Practical Techniques from the NAVC Institute, which gives our readers insight into the unique education provided at the Institute through articles published in the journal.

This article reviews information from the session, Practical Techniques in Soft Tissue Surgery, presented at the NAVC Institute 2015.

This extensive range of skin transfer is due to the long, robust CSE artery, which branches from the external pudendal artery in the caudal part of the inguinal canal; then continues cranially just deep to the mammary glands along the mammary row (Figure 2). 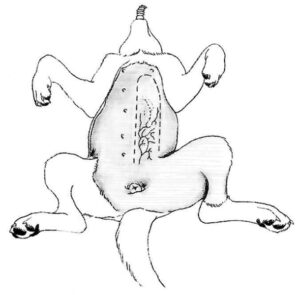 When creating the flap, once the cranial, medial, and lateral aspects of the flap have been freed, most of the skin of the mammary chain can be elevated from the abdominal fascia and effectively transferred to distant skin defects. The donor skin defect can then be closed routinely, similar to closure after a unilateral mastectomy.

Due to the flap’s abundant blood supply and skin with thick subcutaneous tissue padding, the flap can be used to successfully cover:

The most common indications for CSE axial pattern flaps are (Figures 3–5):

FIGURE 3. Skin defect due to wide surgical excision of a fibrosarcoma in left flank area (A) and CSE flap from left mammary chain transferred to cover defect (B). 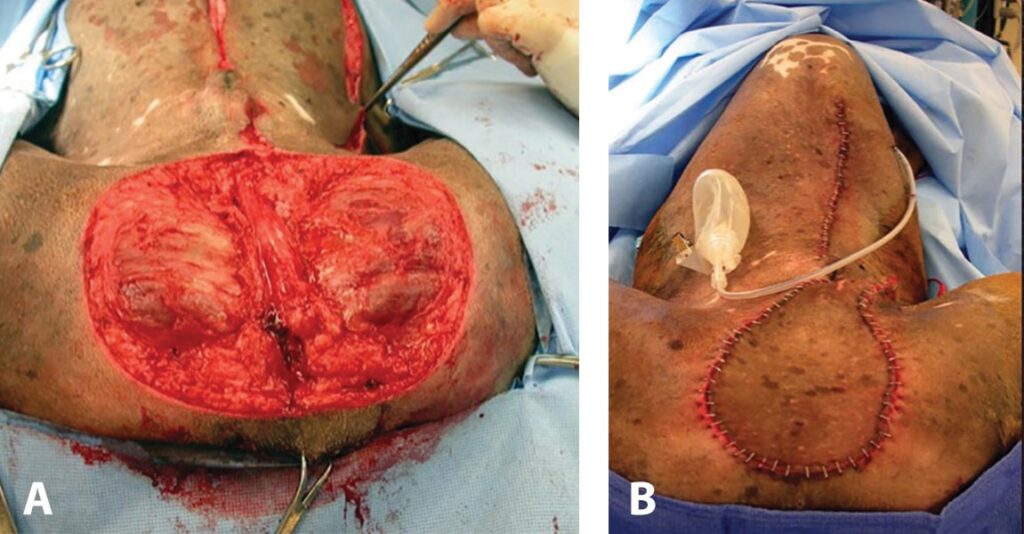 FIGURE 4. Large defect due to wide excision of a large scrotal mast cell tumor in a 10-year-old boxer (A). Left CSE flap reconstruction (B), with a Jackson-Pratt drain placed under the flap and donor area. Note that the drain exit is lateral to the closed donor region. 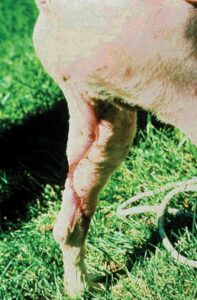 FIGURE 5. A large degloving wound extending from the medial stifle to the tarsus in a mixed breed dog, which was reconstructed with a left CSE flap. The hock region is visible at the distal most aspect of the flap (bottom of image).

For more information on wound management, visit tvpjournal.com and read: 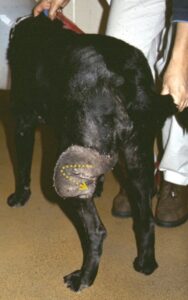 FIGURE 6. Labrador retriever with left CSE flap; the distal aspect is folded to form a “paddle” to reconstruct a large caudal thigh defect after wide excision of a malignant tumor. Yellow dashed arrow depicts the folded distal end of the flap.

1. Using aseptic technique, debride and lavage the wound if it is not fully covered with healthy granulation tissue. Culture tissue removed from the wound bed, particularly if the wound is considered contaminated.

2. Sharply undermine the skin edges of the wound for several millimeters to create a free edge to which the flap will be sutured. Cover the prepared recipient wound with moistened laparotomy pads as you begin flap (donor skin) preparation.

1. Draw the proposed flap dimensions with a sterile drawing pen (Figure 7). The medial border is located on the ventral abdominal midline from the pubis to a point between the first and second mammary glands. In male dogs, the medial caudal border includes the skin just lateral to the base of the prepuce.

FIGURE 7. Large skin defect on caudal medial left thigh of a dog (A). The left limb is pulled upward, showing the medial thigh defect. Ink lines show proposed skin incision to create CSE flap (B); X is over the inguinal ring. The surgeon is drawing the course of the CSE vasculature in the middle of the left mammary chain.

3. Taper down the lateral skin margin toward the inguinal ring area, which makes the donor defect in the inguinal region easy to close after flap transfer.

4. After ascertaining the appropriate flap length, draw a line connecting the medial and lateral skin flap lines at the distal aspect of the proposed skin flap. Create the shape of the distal end of the flap with rounded margins to facilitate closure of the cranial aspect of the donor defect without dog-ear formation.

1. Using a scalpel blade, incise skin along the borders of the drawn lines to outline the flap. Because the skin incision tapers caudally in the inguinal region, do not damage the nearby underlying CSE vasculature. 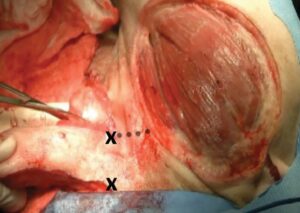 FIGURE 8. The flap has been undermined and the surgeon is using Metzenbaum scissors to free tissue at the base of the flap. Proposed bridging incision (dotted line). Flap base is between two Xs.

3. Cover the donor skin edges and defect with moistened laparotomy pads as you undermine the flap.

Create a Bridging Incision If Necessary

1. If the base of the flap does not extend to include the skin defect, a bridging incision is necessary to allow a pathway for the flap to reach the recipient bed.

2. Make an incision through the skin and subcutaneous tissue directly between the base of the flap and recipient bed. Determine where the flap base best sits within its rotated arc to decide where to create the bridging incision (Figure 9). 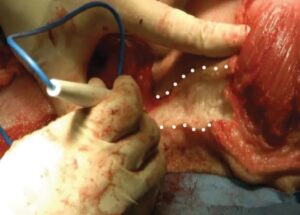 3. Undermine the skin adjacent to the bridging incision to allow for the width of the tapered skin flap base to comfortably fit within it.

Transfer the Flap into the Recipient Bed

1. Rotate the flap onto the wound. KEY POINT: The flap can be stretched somewhat to accommodate the wound defect, but do not allow tension or kinking of the CSE vessel if the flap is rotated 180 degrees or more.

2. Ensure the distal aspect of the flap is positioned in the distal most area of the open wound. Try multiple flap positions until you find the best location for the flap (Figure 10). 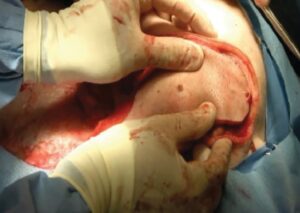 FIGURE 10. The flap location is adjusted to fit within the defect.

3. Once the best flap position is found, move the affected limb in multiple directions to ensure the flap is not under tension (especially for normal standing and walking limb positions).

4. If the open wound is round and wide, and a “U turn” of the distal flap to create a “paddle” is planned, additional flap maneuvers may be necessary before beginning closure (Figure 6).

5. If the flap does not fully cover the open wound, use other reconstructive options for closure.

6. While many surgeons prefer routine closed-suction drainage of these flaps to avoid seroma, I have found that drains are generally not necessary if atraumatic subcutaneous dissection and undermining were conducted and hemostasis was meticulous. If drainage is elected, ensure there is a good seal around the wound edges during closure. Do not exit the closed suction drain through the flap; instead, exit it lateral to the flap (Figure 4).

1. KEY POINT: I prefer not to tack down or use walking sutures in the subcutaneous tissues to attempt to reduce motion and dead space under the flap and inguinal region. These sutures could inadvertently damage the blood supply to the flap.

2. Starting at the distal most aspect of the flap, use widely spaced interrupted hypodermal sutures to fasten the flap into its permanent location (Figure 11). Alternatively, some surgeons use small towel clamps to help hold the flap and donor defect edges together while suturing. 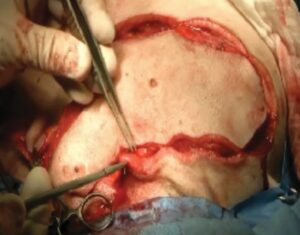 FIGURE 11. Simple interrupted hypodermal sutures are placed to distribute the tension evenly around the flap and defect margins.

4. Keep the donor defect covered with moistened laparotomy pads until the hypodermis of the flap and defect margins is closed. Undermine the donor skin margins if tension develops while closing the defect. 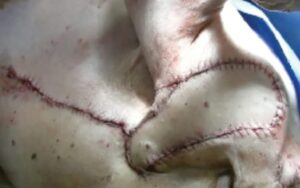 FIGURE 12. Healed CSE flap at suture removal 14 days after reconstruction; this is the same dog shown in Figures 7 to 11.

Once surgery is complete, place an Elizabethan collar on the patient and cover the mammary donor region with a stockinette or light bandage (at the surgeon’s discretion). I prefer not to bandage the flap after surgery as bandages often “ride up” in the inguinal region, which can cause discomfort and, more important, put pressure on the flap vasculature, compromising perfusion of the flap.

The donor area can be cold-packed for several days after surgery, but I prefer to avoid cold packing the flap region, which can cause vasoconstriction of the subdermal blood supply and compromise the flap.

KEY POINT: Expect the extensive skin incision and undermining to cause substantial pain post surgery. Therefore, systemic opioids and nonsteroidal anti-inflammatory drugs are administered postoperatively for 24 to 48 hours. Appropriate orally administered analgesics are given for 5 to 7 days after surgery.

Postoperative antibiotic use is limited to patients with signs of wound infection or those in which there was a break in aseptic technique during the surgical procedure.

Owners are instructed to monitor wounds carefully and seek veterinary attention if they notice increasing discomfort, inflammation, or drainage after surgery. Patients should be strictly limited to leash walks, and prohibited from stair climbing, jumping, or running until suture removal at 14 days after surgery. The patient can then gradually increase activity.

Seromas, hematomas, and wound dehiscence are potential postoperative complications seen after extensive reconstructive surgery such as described in this article (Figure 13). 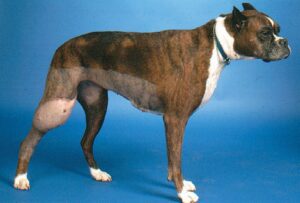 FIGURE 13. Patient with a seroma under a right CSE flap, which was used to reconstruct a defect over the cranial stifle and proximal lateral tibia.

If performed correctly, CSE axial pattern flaps have a low risk for flap necrosis (< 10%) and infection. Minor complications, such as seroma, partial incisional dehiscence, flap edema, and bruising, are generally amenable to conservative management and do not affect long-term prognosis.