In this How I Treat interview, Terry Curtis, DVM, MS, DACVB, answers our questions about key treatment protocols for behavior issues noted when the owner is leaving or not at home, often diagnosed as “separation anxiety.”

Today’s Veterinary Practice “How I Treat” column is based on the popular How I Treat sessions presented at the annual NAVC Conference in Orlando, Florida. This column features interviews with leading veterinary specialists on pertinent clinical topics, with the goal of bringing practitioners essential information on therapeutic approaches.

Q. What are the classic signs of separation anxiety in dogs that practitioners may recognize from an owner’s description of a dog’s behavior?

A. Classic signs of panic in dogs include distress vocalization (howling, yelping), elimination (“fight or flight” urination and/or defecation), attempts at escape that result in destruction (typically through the door by which their owners have left), and/or destruction of other locations or objects (digging at walls, chewing at furniture, etc).

Dogs that feel panic at being left alone typically do so for 3 reasons:

Any of these can be discrete presentations, or they can be seen in combination.

Dogs with departure anxiety tend to show anxiety when they observe their owners’ “pre-departure” signals: putting on certain clothes and shoes, packing a briefcase or handbag, picking up keys, etc. These dogs have learned—through classical conditioning—to associate these actions with being left behind.

Dogs with crate/barrier anxiety are those that panic because they are confined. These dogs typically present for breaking out of crates and, often, injuring themselves (broken teeth, torn claws, or ulcerated muzzles).

Q. What investigative measures would you advise to rule out other causes of these behaviors?

A. A dog with crate/barrier anxiety is the easiest to confirm and treat. To do so, simply leave the dog out of the crate. Many of these dogs were crated as puppies because they were thought to have “separation anxiety,” perhaps because they eliminated in the house as a result of incomplete house training. Once the barrier is removed, this group of dogs is no longer anxious when left alone.

To confirm the other two types, because the behavior that we need to observe is happening out of the owner’s sight, it is important to video the behavior. Once there is a record of the dog’s activity when alone, we have more information as to the correct diagnosis and treatment plan. For example, if the dog is seen pacing, panting, urinating, and defecating just minutes after the owner leaves—that’s panic. However, if the dog urinates by the door 3 hours after the owner has left, this behavior could be “I gotta go!” It is then a matter of the dog not being completely housebroken.

Getting a complete history from the client is extremely important. For example, concerning the destructive dog, one should ask, “What items are being destroyed?” Again, if the video shows the dog furiously digging at the door that leads out to the garage—the owner’s departure door—then that points to a diagnosis of departure/separation anxiety. However, if the dog is seen scanning the kitchen counters and garbage cans for goodies, then we’re dealing with an entirely different problem.

Remember to consider when the behavior occurs. If the dog is okay for Monday, Wednesday, Thursday, and Friday departures but “goes berserk” on Tuesdays—what’s different? It may be that Tuesday is trash pick-up day, or the day when the pool people come. If the behavior is even more random, the owner should keep a log of when the dog exhibits the anxious behavior. Did the dog’s excessive salivation coincide with a storm? Did the dog damage the blinds because of a package delivery? Often, it is not until we start looking for a pattern that we find one.

Q. How can an owner improve separation-related behavior?

A. As mentioned, for dogs that have distress only when crated or enclosed in a small space, treatment can be very simple and straightforward: let the dog out of the crate or small space.

Owners of dogs that have learned that departures or being alone is scary have more homework to do. Often, departure and separation anxiety are seen together, so the following recommendations are indicated for both presentations. First, owners need to address the actions and cues that predict their departure. This can be done several ways:

Once the cues are no longer predictive of a departure, owners can start leaving for longer and longer periods of time, which teaches the dog that it can be alone.

For some dogs, the panic is so severe that other options need to be employed, such as dog-sitters or doggie daycare.

One should take into account the dog’s age when considering a diagnosis. It is important to rule out “normal” puppy behavior: destruction, elimination, etc. Conversely, in an older dog, one should consider the possibility of cognitive decline, especially if it is a recent behavioral change. 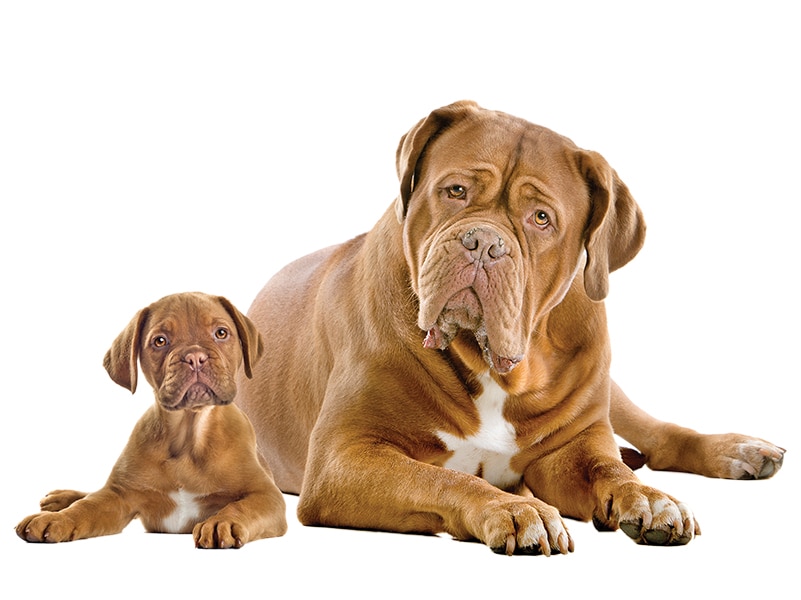 Q. What medications can be used to assist with behavioral modification, and how successful are they?

A. Medications used to decrease anxiety and panic can be very helpful in the treatment of separation-related behaviors. Generally, there are two groups of medications to consider:

Currently, Clomicalm (clomipramine) is the only FDA-approved medication for the treatment of separation anxiety in dogs. It is a tricyclic antidepressant (TCA) that targets the serotonin system. Other, more common medications that positively affect serotonin are fluoxetine (Prozac) and paroxetine (Paxil), which are selective serotonin reuptake inhibitors (SSRIs). All of these medications are given daily and generally take several weeks to reach peak effects. These medications should never be given together, because serotonin syndrome could result.

The benzodiazepines and trazodone are fast-acting and short-acting medications and can therefore be very helpful in addressing the panic that dogs feel. These medications can be used alone or in combination with a TCA or an SSRI.

Antianxiety alternatives such as pheromones, supplements, and diets can also be used alone or in combination with one or more of the medications discussed here.