Sidney had a history of chronic keratoconjunctivitis sicca that was treated with topical cyclosporine.

Two days before presentation, Sidney began refusing to eat and became lethargic. At that time, she was taken to her primary care veterinarian; basic blood analysis and urinalysis were performed (specific results not available). The urinalysis results indicated a urinary tract infection, and Sidney received amoxicillin/clavulanic acid.

However, after initiation of antibiotic therapy, Sidney had loose stools that contained gelatinous red clumps. At this point, her primary care veterinarian referred her for further diagnostics and treatment. 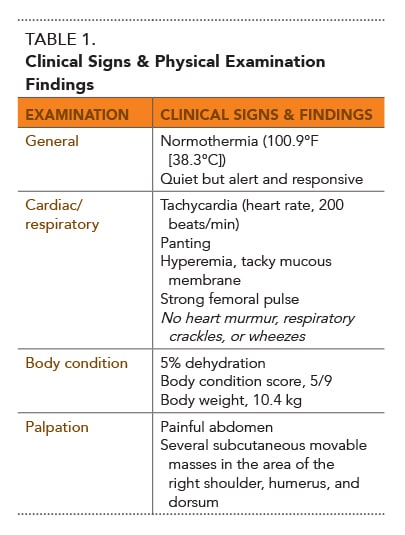 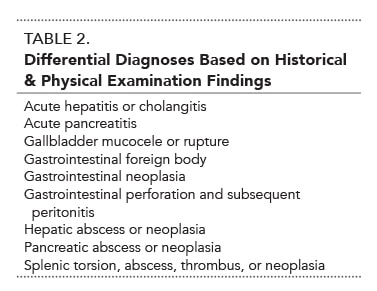 In addition, 3-view abdominal radiographs were taken to rule out a gastrointestinal (GI) foreign body and other obvious abdominal organ-related diseases. On the basis of abdominal radiography results, abdominal ultrasonography with abdominocentesis was performed. The collected abdominal fluid was prepared for analysis and cytology. 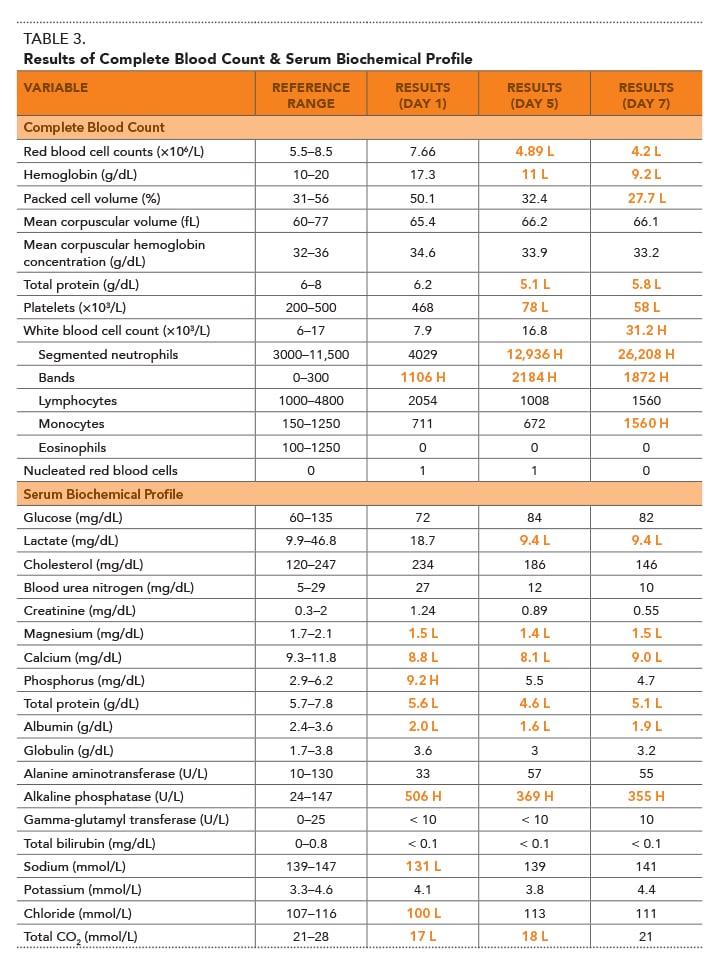 The number of red blood cells (RBCs) was normal at first and mildly decreased later. The normal number of RBCs upon presentation may have been related to the mild dehydration. With aggressive fluid therapy, the patient became mildly anemic due to a dilutional effect on the number of RBCs.

Moderate thrombocytopenia together with the coagulation panel results indicated disseminated intravascular coagulation (DIC). DIC can occur in patients with severe pancreatitis and other serious systemic diseases, such as sepsis due to peritonitis or neoplasia.

Decreases in total protein and albumin are common in dogs with severe acute pancreatitis and other causes of peritonitis due to albumin loss into the peritoneal effusion. However, the pathogenesis may vary and there are many other differential diagnoses for decreased albumin, including:

The urine culture was negative; this result may have been affected by the antibiotic therapy initiated 2 days prior to presentation. The antibiotic was discontinued during hospitalization because there was no evidence of a urinary tract infection and the diarrhea was considered a potential side effect of antibiotic therapy.

DIC was indicated on the basis of thrombocytopenia, mildly prolonged prothrombin time and partial thromboplastin time, decreased antithrombin III, and increased D-dimers, but there were no clinical signs of thrombosis or bleeding. 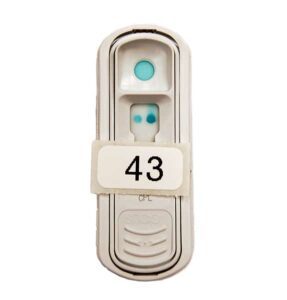 FIGURE 1. Positive result on a SNAP cPL test. The spot on the right (patient spot) is darker than the control spot on the left side, indicating a serum cPL concentration either in the gray zone or diagnostic for pancreatitis, and requiring a serum Spec cPL test to differentiate between them.

Loss of serosal detail in the right cranial abdomen was consistent with peritoneal effusion, while a mildly enlarged and rounded liver was consistent with hepatic venous congestion, hyperadrenocorticism, diabetes mellitus, neoplasia, or an acute inflammatory hepatopathy.

Considering the patient’s clinical signs and radiographic findings, the top differential diagnosis was pancreatitis with extrahepatic biliary obstruction. However, inflammatory hepatopathy, such as a gallbladder mucocele with possible bile peritonitis or hepatic neoplasia with hemorrhagic or neoplastic effusion, were also considered differential diagnoses. 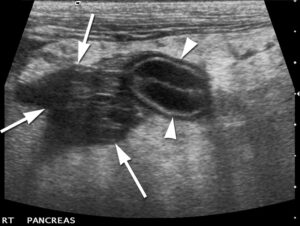 These findings were most likely suggestive of pancreatitis, with no evidence of gallbladder mucocele or obvious pancreatic neoplasia. However, hepatic neoplasia could not be completely ruled out. Further diagnostic workup for possible neoplasia and other causes of enlargement of several abdominal lymph nodes was refused by the client.

On day 7 of hospitalization, all IV fluids and medications were discontinued and Sidney was discharged on oral medications, including tramadol (25 mg PO Q 8 H), clopidogrel (18.75 mg PO Q 48 H), and maropitant (24 mg PO Q 24 H). In an attempt to prevent a recurrent episode of acute pancreatitis, an ultra low fat diet was recommended and any treats with high fat content were discouraged.

Sidney was discharged after 7 days of hospitalization and was presented for a recheck 3 days after discharge. Sidney’s owners reported that she had a good appetite, and there were no signs of abdominal pain. No vomiting or diarrhea was identified.

The prognosis for dogs with acute pancreatitis varies and largely depends on disease severity. There is no universally accepted severity score for pancreatitis that allows prediction of prognosis available in veterinary medicine. In general, systemic complications can indicate severe pancreatitis and a poor prognosis.1

A recent study2 suggested that serum paraoxonase 1 activity, combined with triglyceride and C-reactive protein concentrations, can help evaluate disease severity, but further studies are warranted. In Sidney’s case, prognosis was poor to guarded when she was hospitalized, but upgraded to fair to good upon discharge. However, long-term follow-up was not achieved.

Update on Pathophysiology of Pancreatitis

The exact mechanism of development of naturally occurring acute pancreatitis in dogs is still poorly understood.

It has been postulated that pancreatitis develops as a result of autodigestion and severe inflammation caused by inappropriate premature activation and secretion of proteases (especially trypsinogen to trypsin) within pancreatic acinar cells. Pancreatitis and subsequent peripancreatic fat necrosis can cause focal or generalized peritonitis, and most pancreatitis cases in dogs are sterile.

Studies in human medicine3,4 suggest that a compensatory anti-inflammatory response plays an important role in limiting progression of inflammation locally by upregulating anti-inflammatory cytokines, such as IL-10 or IL-11, but no study has been performed to confirm this in dogs.

When these protective mechanisms fail to prevent damage to pancreatic acinar cells, severe inflammation is caused by secreted proinflammatory cytokines from neutrophils and macrophages. A sterile inflammatory peritoneal effusion can occur due to localized peritonitis and the coagulation cascade can be activated, resulting in DIC.

Lungs, kidneys, and livers are especially vulnerable to damage, causing multiple organ failure due to extensive distribution of capillary vessels. In human medicine, multi-organ failure is recognized as having more important relation to mortality in acute pancreatitis than severity of the disease itself3,5 even though no data is available for dogs.

Even with the advanced diagnostic modalities currently available, accurate diagnosis of acute pancreatitis is still challenging. Practically, acute pancreatitis in dogs is usually diagnosed with a combination of history, clinical signs, abnormally high serum cPLI concentration (as measured by Spec cPL), and abdominal ultrasonographic images consistent with pancreatitis. Concurrently, other intra-abdominal diseases that could cause similar clinical signs are excluded by assessment of laboratory test results, survey abdominal radiographs, and abdominal ultrasonography.

Serum lipase activity has traditionally been used to estimate pancreatic lipase in serum. None of the substrates available (including newer substrates, such as triolein or DGGR [1,2-o-dilauryl-rac-glycero3-glutaric acid 6-methyl resorufin ester]), however, are specific for the measurement of pancreatic lipase, and results of clinical studies using these assays are inconsistent.6,8

Pancreatitis can be confirmed by cytologic evaluation of a fine-needle aspirate of the pancreas.7 Histopathology of the pancreas has traditionally been considered the gold standard for diagnosis and classification of pancreatitis. However, a recent study9 suggests that a negative finding (ie, no inflammatory lesions in the biopsy) does not rule out pancreatitis because pancreatic inflammation can be highly localized.

Advanced imaging modalities, including contrast-enhanced computed tomography (CECT) and contrast-enhanced multidetector helical computed tomography (CE-MDCT), have been evaluated and shown different utility for diagnosing pancreatitis in dogs. A study using CE-MDCT10 showed low sensitivity for diagnosing pancreatitis in dogs presented with acute abdominal signs even though CE-MDCT was suggested as a good screening test to differentiate between surgical and nonsurgical conditions. A more recent study11 using CECT concluded that CECT under sedation can confirm a clinical suspicion of pancreatitis. However, these modalities have limited availability for general use.

Because most cases of acute pancreatitis in dogs are idiopathic, the mainstay of treatment is supportive care that includes risk factor control, fluid therapy, nutritional support, and pain control.

Fluids are important to correct hypovolemia, dehydration, and electrolyte and acid–base imbalances as early as possible to prevent any systemic complications, which can be associated with a negative outcome. A study in human medicine12 suggested a possible benefit of using lactated Ringer’s solution because the alkalinizing property of that solution prevented further trypsin activation within the acinar cells, but no data are available for dogs.

Several studies in both humans and dogs suggest that early enteral nutritional support is superior to parenteral feeding in patients with acute pancreatitis as long as it is tolerated.13-16

Every dog with acute pancreatitis should be considered as having abdominal pain even if it is not clinically apparent. A multimodal approach for pain management is advised for better pain control, lower dosages, and fewer adverse effects.

Antiemetic treatment should be started as early as possible even in dogs without overt nausea or vomiting to encourage patients to eat voluntarily.

The proposed advantage of using plasma in dogs with acute pancreatitis includes supplementation of alpha-2-macroglobulin (scavenger proteins for activated proteases in serum), coagulation factors, and anti-inflammatory factors.20 Due to the high cost and lack of confirmed benefits in dogs, however, plasma transfusion is generally reserved for dogs suspected to have DIC.

Bacterial complications are extremely rare in dogs with naturally occurring acute pancreatitis. Only dogs with overt bacterial infections or a strong suspicion for such an infection should be given broad spectrum antibiotics.

Amoxicillin/clavulanate acid (12.5–25 mg/kg PO Q 12 H) or ticarcillin (33–50 mg/kg IV or IM Q 4–6 H) has been recommended as first choice antibiotics, if needed, but this recommendation is based on expert opinion rather than critical research.21

If identifiable, any risk factors should be discontinued or avoided when a patient has been diagnosed with pancreatitis (Table 5). Specifically, medications that have been shown to cause pancreatitis should be considered for discontinuation or replacement with another medication.

Canine acute pancreatitis is a reversible disease when diagnosed promptly and managed appropriately. Avoiding known risk factors and careful monitoring after the first episode are important in prevention of progression to chronic pancreatitis or recurrent acute pancreatitis.

Jörg M. Steiner, med.vet., Dr.med.vet., PhD, Diplomate ACVIM & ECVIM (Companion Animal), AGAF, is a professor in the Departments of Small Animal Medicine and Surgery and Veterinary Pathobiology, as well as director of the Gastrointestinal Laboratory, at Texas A&M University. He has authored or coauthored more than 210 peer-reviewed articles, 75 book chapters, and 330 research abstracts, and is a Fellow of the American Gastroenterology Association. He received his veterinary degree from Ludwig-Maximilians University, Munich, and completed an internship at University of Pennsylvania, residency in small animal internal medicine at Purdue University, and PhD at Texas A&M University.

Chee-hoon Chang, DVM, MS, is a PhD student in the Gastrointestinal Laboratory at Texas A&M University. Dr. Chang received her DVM and MS from Chonnam National University in South Korea and completed her small animal rotating internship and specialty internship in emergency and critical care at Washington State University. She is also a small animal internal medicine resident at Texas A&M University. Her research interests include gastrointestinal and pancreatic diseases.

Neutrophilic Cholangitis in Cats: Are You Missing Out on an Easy Diagnosis?