David Bruyette, DVM, Diplomate ACVIM, is the medical director at VCA West Los Angeles Animal Hospital and President and CEO of Veterinary Diagnostic Investigation and Consultation. He was an assistant professor and head of internal medicine at Kansas State University and director of its Analytical Chemistry Laboratory. Dr. Bruyette received his DVM from University of Missouri and completed an internship at Purdue University and residency in internal medicine at University of California–Davis. He then became a staff internist at West Los Angeles Veterinary Medical Group and member of the Department of Comparative Medicine at Stanford University. 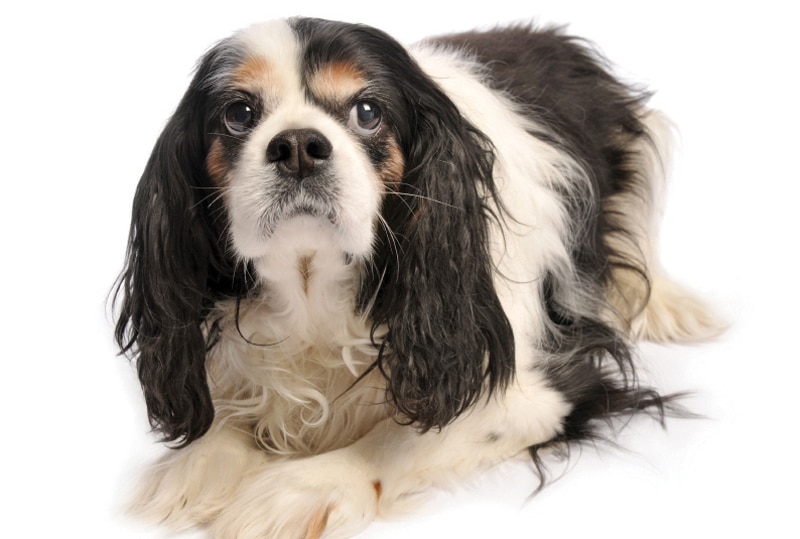 Canine pituitary dependent hyperadrenocorticism (PDH), also known as Cushing’s disease, is a common endocrine disorder in older dogs. This disorder is caused by a pituitary adenoma (PA) that secretes inappropriate amounts of adrenocorticotropic hormone (ACTH), which results in bilateral adrenal hyperplasia and disorderly and excessive production of cortisol by the adrenal gland.

As with all central nervous system tumors, the Tumor–Node–Metastasis system used by the World Health Organization does not apply. Current classification systems for PAs in veterinary patients are based primarily on secretory characteristics of the tumor. However, in humans, PAs are currently classified based upon:

In both humans and dogs, pituitary corticotroph adenomas that are responsible for Cushing’s disease (ie, PDH in dogs) are classified as functional ACTH-secreting PAs (ACTH-PAs). 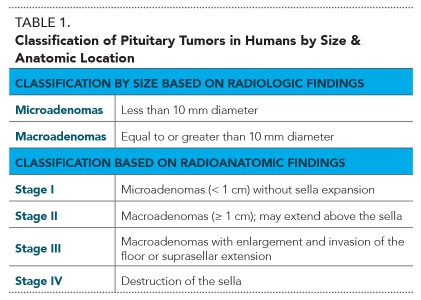 The World Health Organization classification system for PAs in humans has been refined to include designations for benign adenoma, atypical adenoma, and pituitary carcinoma on the basis of proliferation indices (p53 immunoreactivity, MIB-I Index, mitotic activity) and the absence/presence of metastases.2

The study of pituitary tumors in both humans and animals is important because new discoveries regarding pathogenesis and treatment options in one species may cross over to the other, resulting in an example of One Medicine.

In humans, PAs are common tumors, with an overall prevalence in the general U.S. population estimated at 16.7%.2

Functional ACTH-PAs have a reported incidence of 0.2% in all dogs (1–2 cases/1000 dogs/year), with approximately 100,000 dogs affected yearly in the United States.3,4 PDH accounts for approximately 85% to 90% of cases of hyperadrenocorticism, with the remainder of cases resulting from functional adrenal tumors, meal/food-induced cases, occult, or atypical disease.4

The pathogenesis of pituitary tumors that produce ACTH is becoming more evident based on ongoing studies evaluating gene and protein expression in both humans and dogs. This information will aid our understanding of tumorigenesis and point us toward targeted specific therapies.

Two theories have been put forward to explain the development of an ACTH producing pituitary tumor (ACTH-PA, corticotrophinoma):8

In this theory, the hypothalamus stimulates corticotrophs through enhanced secretion of corticotropin releasing hormone (CRH) and vasopressin.9 In addition, concurrent defects in the pituitary glucocorticoid receptors (GRs) on the corticotroph cells lead to decreased negative feedback by cortisol on CRH and ACTH synthesis.10

Gene Mutation. Karl and colleagues11,12 and Lamberts10 described a mutation in the gene in humans that encodes the GR, with a reduction in the sites of DNA binding, while maintaining affinity for cortisol. This de novo mutation promotes GR resistance that precedes the formation of the corticotrophinoma.

Recent studies by Teshima and colleagues,13,14 using trilostane to decrease cortisol, demonstrated pituitary tumor growth as a consequence of a reduction in negative feedback. Their studies on canine ACTH tumor cells suggest that reduced negative feedback might first lead to corticotroph hyperplasia followed by a subsequent somatic mutation that could lead to tumor development.9

Dopaminergic Actions. Other possibilities for a hypothalamic theory of PDH include:

With this possibility, adenomas would evolve secondary to somatic mutations in hyperplastic cells.

The hypothalamic theory is reinforced by the recurrence of ACTH producing tumors following surgery or in patients in which no tumor was found on MRI or when exploring the sella. Both scenarios suggest stimulation or lack of inhibition of ACTH producing cells from higher centers (hypothalamus or hippocampus). This hypothesis is also supported by the fact that individuals with chronic stress and greater activation of the hypothalamic–pituitary–adrenal axis show corticotroph hyperplasia.21

The main evidence against the hypothalamic theory is presence of tumor clonality in the majority of the adenomas studied in humans.9,22 The monoclonal theory argues that the adenoma occurs in the pituitary outside of other influences and arises through the somatic mutation of a corticotroph cell, resulting in a tumor clone. This mutation precedes the clonal expansion of the tumor.23

Unknown are which mutation(s) result in the development of a tumor. Taking into account microadenomas and macroadenomas, the existence of a variety of corticotrophinomas is suggested. The majority of microadenomas in dogs do not progress to become macroadenomas. Macroadenomas can display a variety of behaviors, from limited growth and indolent course to more aggressive behavior as seen in human patients with Nelson’s syndrome in which the pituitary tumor grows rapidly following bilateral adrenalectomy or suppressive medical therapy.24

Gene Origin. In humans with functional ACTH-PAs, studies have identified 43 genes and 22 proteins as overexpressed and 58 genes and 15 proteins as underexpressed compared with normal pituitary tissue (Table 2).2 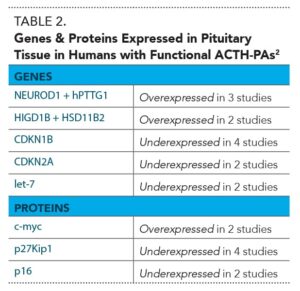 In dogs, we are just beginning to learn more about genes and protein expression in patients with PDH. The recent demonstration of expression of somatostatin receptor subtypes and dopamine receptor subtype 2 (D2) in canine corticotroph adenomas offers the possibility for novel medical treatment of PDH with somatostatin analogs and dopamine agonists.19

Cancer Stem Cell Origin. Another possible origin of pituitary adenomas is found in cancer stem cells. In a recent study in dogs, the expression of melanotroph specific transcription factor paired box protein 7 (Pax7) and stem cell marker and reprogramming factor sex determining region Y-box 2 (Sox2) was determined and correlated to parameters, such as tumor size. This study suggested that Pax7 and Sox2 remain interesting targets for molecular investigations into their roles in pituitary tumorigenesis, but were unsuitable as clinical prognosticators in dogs.25

The ratio between pituitary height and area of the brain (P/B) has been used to evaluate pituitary size:

A recent study investigated the expression of proliferation markers Ki-67 and minichromosome maintenance-7 (MCM7) in canine corticotroph adenomas in enlarged and nonenlarged pituitaries, and evaluated their relation to the size of canine pituitary corticotroph adenomas:26

Thus, MCM7 may be superior to Ki-67 as a proliferation marker in canine pituitary tumors.

A polymorphism is a DNA sequence variation that is common in the population, and no single allele is regarded as the standard sequence. Instead, there are 2 or more equally acceptable alternatives.

In contrast, a mutation is defined as any change in a DNA sequence away from normal, implying that there is a normal allele prevalent in the population and the mutation changes this to a rare and abnormal variant.

The cut-off point between a mutation and polymorphism is 1%: To be classified as a polymorphism, the least common allele must have a frequency of 1% or greater in the population. Once the frequency is less than 1%, the allele is regarded as a mutation.

A recent study in 14 dogs with PDH examined the expression and mutation analysis of Tpit in normal canine pituitary and corticotroph adenomas:27

The study concluded that Tpit can be used as a reliable marker for corticotroph and melanotroph cells in canine pituitary tissue, but that mutations in the Tpit gene are unlikely to play a major role in pathogenesis of canine corticotroph adenomas.

Leukemia inhibitory factor (LIF) is a cytokine of the IL-6 family that activates the hypothalamic–pituitary–adrenal axis and promotes corticotroph differentiation during development. LIF and leukemia inhibitory factor receptor (LIFR) expression were studied in pituitary glands of control dogs and specimens of corticotroph adenoma tissue collected from dogs with PDH.28

Their results demonstrated that:

Since tumors in dogs and humans express epidermal growth factor receptor (EGFR), in another study we examined whether EGFR might provide a therapeutic target for Cushing’s disease.29

These study results indicate that inhibiting EGFR signaling may be a novel strategy for treating Cushing’s disease.

Diagnosis Of Cushing’s Disease in Dogs

Clinical signs, as well as laboratory abnormalities, seen in patients with PDH are secondary to the effects of steroid excess, well recognized and similar in scope to those seen with exogenous glucocorticoid supplementation (Tables 3 and 4). 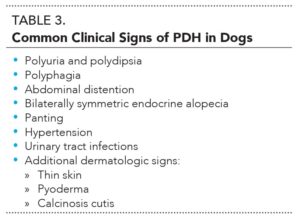 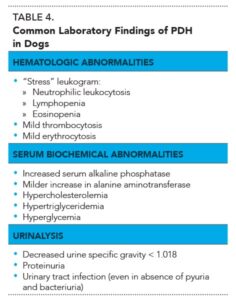 Awareness of PDH has increased over time, resulting in the presentation of patients with only mild clinical signs, clinical signs affecting only one organ system (eg, polyuria and polydipsia or alopecia), absent clinical signs, or unusual isolated manifestations of the disease (Table 5). 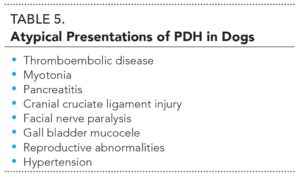 Specific endocrine tests and imaging modalities are available to diagnose PDH and distinguish between the various causes of hyperadrenocorticism. No single test is perfect and, if the initial screening test is negative and high clinical suspicion of PDH exists, additional tests should be performed to rule it in or out. Endocrine evaluation of patients with PDH and nonadrenal illness can be difficult; it is important to eliminate or manage the concurrent illness before undertaking adrenal function tests.

Further information about diagnosis of canine PDH is discussed in this follow-up piece.