In dogs, nutrition is increasingly used to modify the response to tissue injury as part of a multimodal approach. Several nutritional factors should be evaluated, including dietary protein, fatty acid composition, and energy intake.

Justin Shmalberg, DVM, DACVN, DACVSMR, is a clinical associate professor of integrative medicine at University of Florida College of Veterinary Medicine. His service specializes in the incorporation of nutrition, rehabilitation, hyperbaric oxygen therapy, and acupuncture with conventional care; he holds certifications in acupuncture and herbal medicine. Dr. Shmalberg’s research interests include nutritional oncology, sports and rehabilitative nutrition, evaluations of new small animal dietary trends, and the safety and efficacy of Chinese herbal products. He received his DVM from University of Wisconsin-Madison. Dr. Shmalberg completed an internship in veterinary acupuncture at University of Florida along with a residency in small animal clinical nutrition. 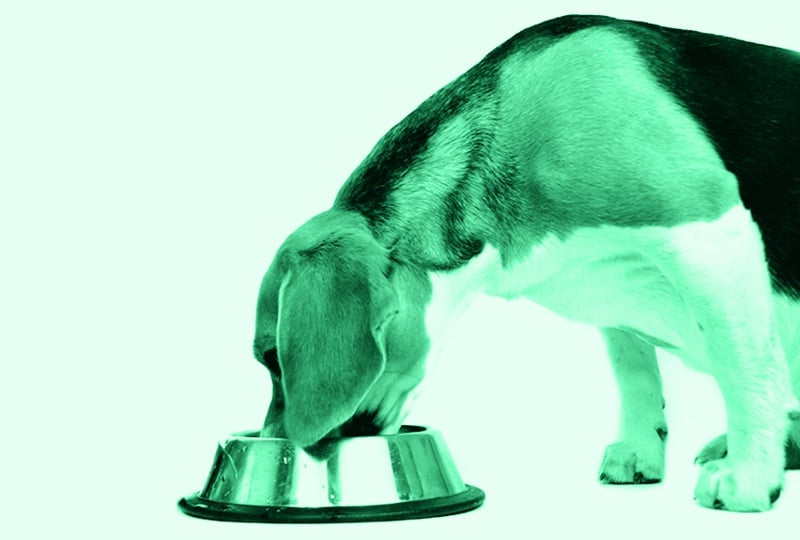 Injured dogs—whether sedentary or active—benefit from specific nutritional considerations during recovery from musculoskeletal trauma or surgery. An expanding body of evidence suggests best practices for dietary modification during rehabilitation, and practitioners should be prepared to discuss these practices with interested owners.

In canine patients, nutrition is increasingly used to modify the response to tissue injury as part of a multimodal approach. Several nutritional factors should be evaluated, including dietary protein, fatty acid composition, and energy intake (Table 1).

Presently no diets are expressly marketed for rehabilitation. However, several diets labeled for osteoarthritis are suitable while others contain potentially suboptimal levels of protein for rehabilitation. Diets formulated for growth, athletic performance, or working dogs are more likely to contain the targeted levels of macronutrients compared with many maintenance formulas. The guaranteed analysis of any diet can be used to calculate and objectively compare the amount of each nutrient (grams) per 1000 kcal of food.

Injured dogs may have higher rates of protein turnover and decreased energy expenditure due to inactivity. As a result, in most cases, diets elevated in protein should be selected (> 75 g/1000 kcal) to prevent relative deficiencies. Specific amino acids, such as leucine, help decrease exercise-induced proteolysis in dogs during muscle activity.1 Extensive data in humans suggest that leucine stimulates skeletal muscle protein synthesis, and this benefit most likely applies to convalescing dogs as well.2

Information about the leucine and overall amino acid composition of many diets is not easily obtained. However, selection of a high protein diet generally increases an animal’s leucine intake because adequate leucine is present in both animal-source proteins and in some concentrated vegetable proteins commonly used in pet foods.

To learn more about managing osteoarthritis in dogs and cats, read our Managing Chronic Pain in Dogs & Cats Series:

These articles were published in the November/December 2013 and September/October 2014 issues, respectively.

Veterinary-exclusive “joint” diets vary widely in composition and should not be considered interchangeable (Table 2). Joint diets with a minimum of 75 g of protein per 1000 calories should be used in food-restricted obese patients in order to preserve lean body mass.6 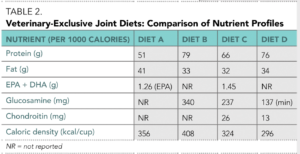 Energy provided during rehabilitation should be adjusted to prevent weight gain.

Underwater treadmill therapy may mildly increase a patient’s energy expenditure if performed routinely at higher speeds, such as during inpatient rehabilitation.

Overweight animals are theorized to be at a greater risk of musculoskeletal injury given increased loading forces on limbs. Therefore, weight loss can be an important part of rehabilitative nutrition.

Calorie restriction—but not protein restriction—should be pursued in overweight animals to achieve a slow rate of weight loss of 0.5% to 1% weekly. Higher rates may be associated with a greater risk of lean body mass loss. Caloric reduction by a minimum of 33% is often necessary.

Diets high in protein appear superior to those with moderate amounts of protein,6 and the energy density of the diet is often decreased by limiting the fat content (the energy density of fat is greater than 2× that of protein and carbohydrate), increasing the moisture content, or adding dietary fiber. Detailed recommendations for weight loss can be found in the article, Treatment of Obesity, published in the September/October 2013 issue of Today’s Veterinary Practice, available at tvpjournal.com.

Weight loss protocols and diet changes are best initiated 2 weeks following any surgery to avoid inadvertent muscle loss in the immediate post-recovery period, and to prevent food aversion to the new diet. Most activity- or cage-restricted patients should, however, have their daily intake initially reduced by 10% to 15% to account for reduced activity during this period.

Long-term caloric restriction for weight loss typically requires less than 70 × (ideal BW in kg)0.75 kcal/day in normal animals, or generally 2/3 of the known weight-stable intake. Dogs with postsurgical cage confinement may require restriction to 50 × (ideal BW in kg)0.75 kcal/day or less to achieve the target rate of weight loss. Diets for weight loss must be higher in protein, essential fatty acids, and some vitamins and minerals per calorie to prevent deficiencies.

Increased exercise is unlikely sufficient to achieve weight loss unless calories are concurrently reduced. For example, an obese dog that weighs 35 kg—its ideal BW should be 25 kg—fed 1000 calories Q 24 H would use only 6% more calories daily if walked a total of 3.2 miles.

While underwater treadmill therapy has been shown to be a part of a successful weight loss protocol, the study lacked a control group, and effect of hydrotherapy alone was unclear.10 Studies in normal dogs walking on an underwater treadmill showed only slightly increased energy expenditure as compared to walking at the same speed on a dry treadmill, as described earlier in the article.

Supplements are aggressively marketed for use in osteoarthritis but have limited evidence supporting their use, with the exception of DHA and EPA.11

Studies of glucosamine and chondroitin are mixed. One study showed a benefit after 70 days, whereas another 60-day trial found no improvement.12,13

Glucosamine and chondroitin products are absorbed orally, but owners should be counseled that their efficacy is not well established.14,15 If owners administer these products, wait at least 2 months before evaluating effectiveness. Client reports of immediate improvement should be met with skepticism based on the available literature. Hyaluronic acid is included in some glucosamine and chondroitin supplements for osteoarthritis and is absorbed following oral administration, but clinical efficacy has not been shown in dogs.

Green-lipped mussel is touted as an alternate dietary source of glucosamine, omega-3 fatty acids, and trace minerals for osteoarthritic patients.16 Studies suggest that some owners will document dramatic improvements, even when given a placebo to administer to their pets, and that clinical improvements with this supplement are mild.17

Boswellic acid, derived from frankincense, is found in some veterinary joint supplements. An anti-inflammatory action has been documented in laboratory studies,18 but only uncontrolled veterinary trials suggesting an effect are available.19

Curcumin is found in veterinary nutraceuticals marketed for arthritis. Its utility as a natural NF-kB (nuclear factor kappa-light-chain-enhancer of activated B cells) and cyclooxygenase-2 inhibitor is documented in humans but not in dogs.20 However, its gastrointestinal absorption in most species appears to be poor. An extract of turmeric, the spice from which curcumin is derived, produced subjective, but not objective, improvements in dogs with arthritis.21

Compounds from the oil portion of avocados and soy are extracted to produce ASU. Human clinical trials have suggested a nonsteroidal anti-inflammatory drug sparing effect. Synovial fluid analyses of dogs receiving the supplement showed increased transforming growth factor beta (TGF-beta) compared with control animals, and TGF-beta is thought to mediate the synthesis of collagen by mitigating effects of interleukin-1.21 Inhibition of nitric oxide synthase and matrix metalloproteinases by ASU at 10 mg/kg has also been shown in experimentally-induced canine arthritis.22

A study identified positive changes in force plate analyses and lameness scoring when dogs were fed labeled doses of an elk velvet antler product.23 The mechanism of effect is unclear but is thought to result from the large collagen content of the product or the unique proteins found in the antler. Adrenal lesions and subsequent death were reported in 2 dogs receiving the supplement, but this could not be linked to the study product.

Gelatin hydrolysate, protein fractions from hyperimmunized cow milk, and undenatured type II collagen are other supplements that have been preliminarily studied in dogs, and additional information is necessary on their efficacy.