The Practitioner’s Guide to Neurologic Causes of Canine Anisocoria

When evaluating patients with asymmetric pupils, the practitioner needs to determine whether one or both pupils are abnormal in size and localize the lesion responsible for anisocoria.

Heidi Barnes Heller, DVM, Diplomate ACVIM (Neurology), is a clinical assistant professor at University of Wisconsin–Madison. Her research interests include feline seizure disorders and the development of anti-epileptic drugs, brain and spinal cord surgery, and inflammatory CNS disease. She received her DVM from Michigan State University, completed a rotating internship at University of Illinois, and completed a combined neurology and neurosurgery residency at University of Florida.

Ellison Bentley, DVM, Diplomate ACVO, is a clinical professor and section head of comparative ophthalmology at University of Wisconsin–Madison. Her research interests include ocular applications of high resolution ultrasound, glaucoma, management of ocular pain, and non-healing corneal erosions in dogs. She received her DVM from University of Florida and completed a small animal internship at North Carolina State University and a residency in comparative ophthalmology at University of Wisconsin–Madison. 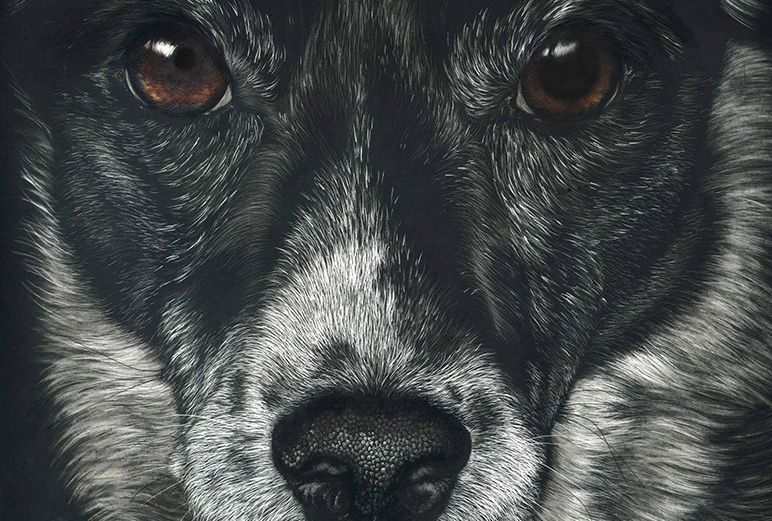 Anisocoria is defined as pupil asymmetry, and may be seen with ocular or neurologic dysfunction (Figure 1).1 When anisocoria is caused by neurologic disease, unequal pupil size may result from malfunction of the sympathetic, parasympathetic, or visual systems. 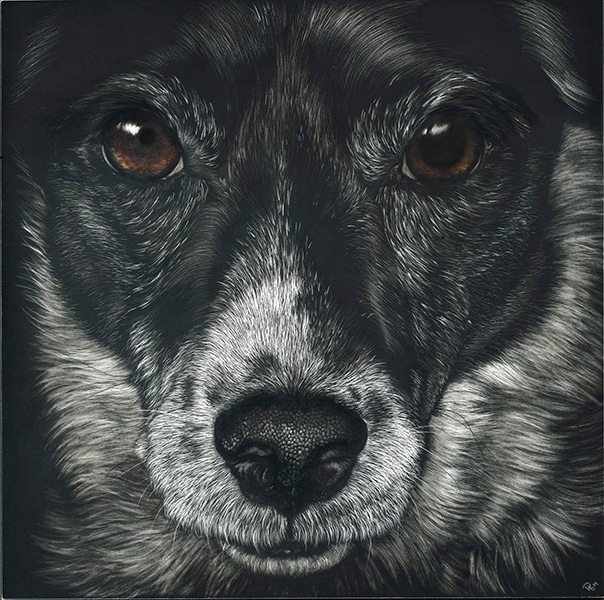 FIGURE 1. Representation of a dog with anisocoria.

When evaluating patients with asymmetric pupils, the practitioner needs to:

The visual pathway (Figure 2) is composed of the retina, optic nerve (also known as cranial nerve II), lateral geniculate nuclei (LGN) in the thalamus, and occipital cortex in the cerebrum.

When light enters the eye, it activates the retinal photoreceptors. This information travels along cranial nerve (CN) II via the optic chiasm to the optic tracts and then the LGN. Optic radiations relay the visual information from the LGN to the occipital cortex. In dogs, about 75% of optic nerve fibers cross to the opposite cerebral cortex at the optic chiasm.1 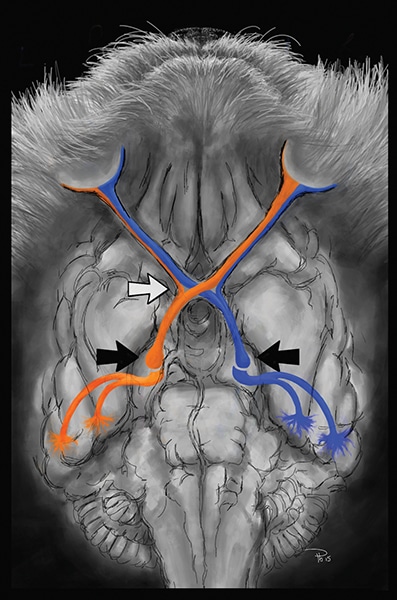 FIGURE 2. Visual pathway from the ventral aspect of the brain. The blue and orange lines represent visual fields from each eye. White arrow—optic chiasm. Black arrows—lateral geniculate nuclei in the thalamus.

The parasympathetic pathway to the eye (Figure 3) is a short, 2-neuron pathway that originates in the midbrain. The paired parasympathetic nuclei of cranial nerve III (PSN CN III), along with the somatic nerves from the oculomotor nerve (CN III), send fibers—called first order neurons, or preganglionic fibers—to the eye. After synapsing in the ciliary ganglion, the short, postganglionic fibers course to the iris sphincter muscle and cause pupil constriction. 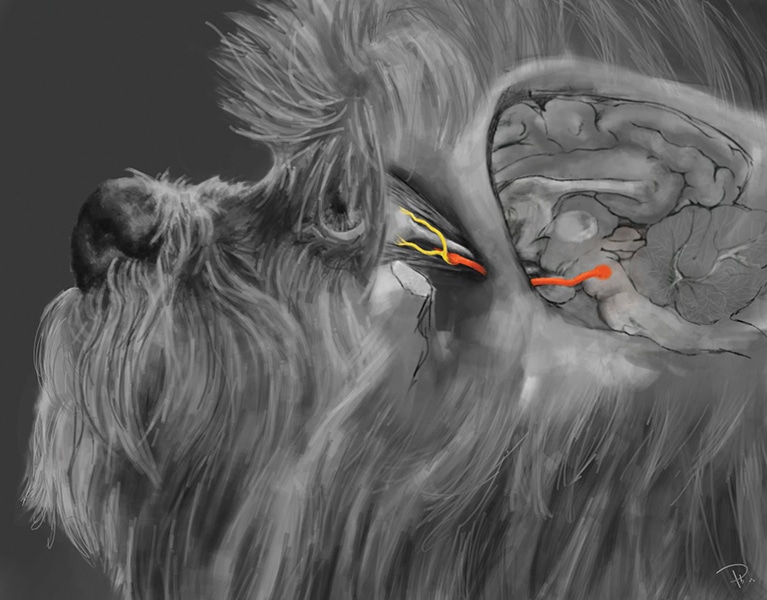 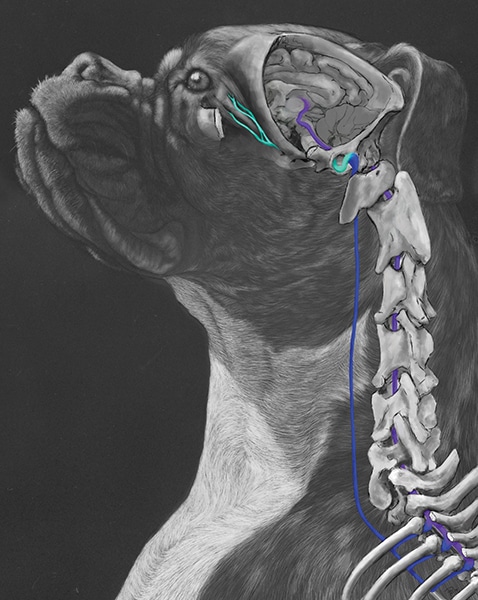 Dysfunction anywhere along this pathway results in a comparatively miotic pupil, which results from failure of the iris to dilate in reduced ambient light, typically accompanied by enophthalmos, ptosis, and third eyelid protrusion over the globe.

In a patient with left eye miosis, left thoracic limb paresis, and absent to decreased left thoracic limb reflexes and postural reactions, the practitioner would localize the lesion to a site that would affect all these structures simultaneously. In this patient, loss of left brachial plexus function and sympathetic innervation to the left eye could be explained by a single lesion at the brachial plexus, which is located between spinal cord segments C6 and T2.

The neurologic examination allows the practitioner to localize the lesion to the visual, sympathetic, or parasympathetic pathways (Table 1). Since each neurologic test has a sensory (afferent) and a motor (efferent) component, the examiner must determine which component is affected.

Table 2 lists the tests most commonly used to evaluate the neuro-ophthalmic system. A detailed description of how to perform each test can be found elsewhere.2 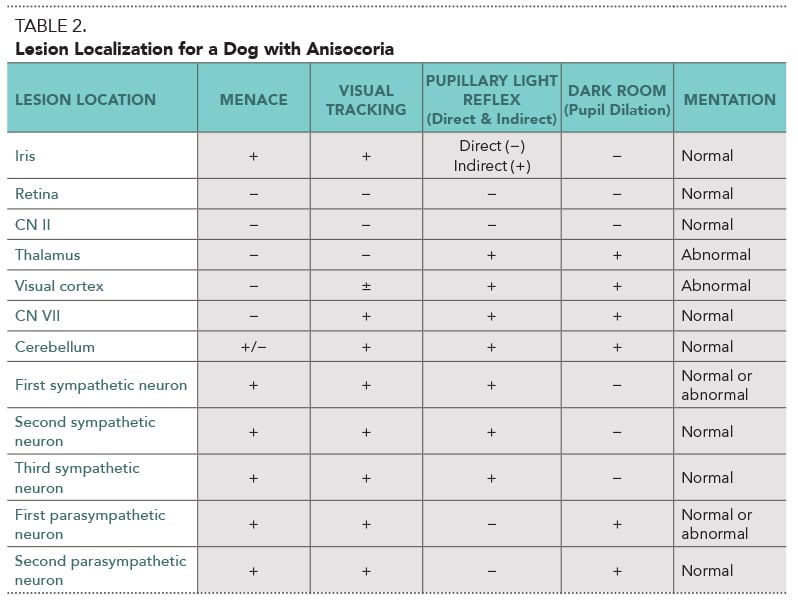 Pharmacologic testing can aid the practitioner with lesion localization within the sympathetic or parasympathetic system.

Physostigmine (0.5%) is a cholinesterase inhibitor and, thus, requires an intact postganglionic neuron to induce miosis.

Dilute pilocarpine (0.2%−1% solution) is a parasympathomimetic alkaloid that may be used to differentiate iris atrophy and other lesions of the iris, such as posterior synechia, from a lesion of the parasympathetic system.

Dilute phenylephrine (1%) can be used to test the sympathetic system. 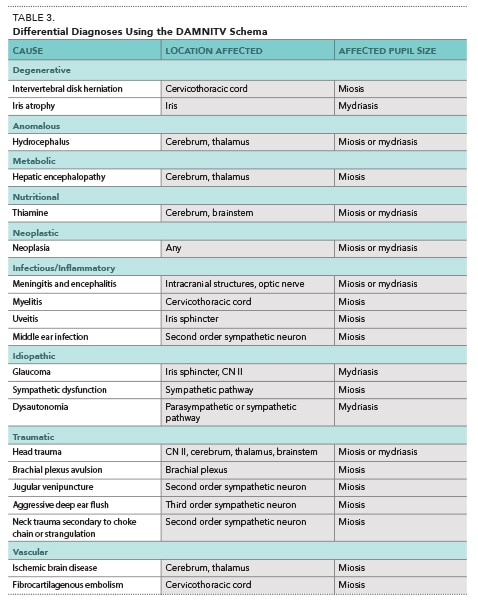 Iris atrophy—thinning of the iris stroma, especially at the pupillary margin where the iris sphincter muscle is located—is a common finding in older dogs. This condition may result in anisocoria and/or PLR abnormalities if dysfunction of the sphincter muscle is notably asymmetric (Figure 5). 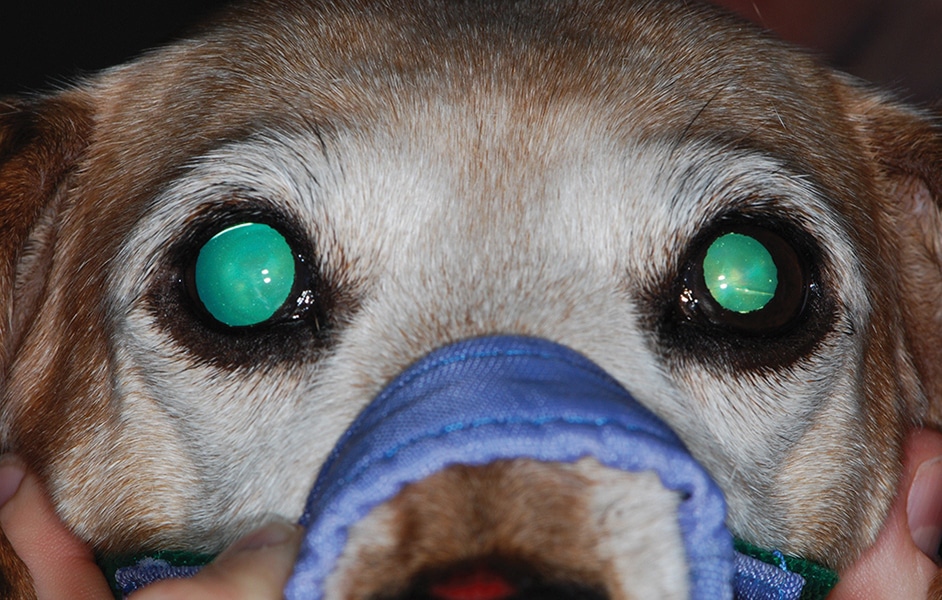 Diagnosis is made by careful examination of the pupillary margin.

A direct PLR will be slow or absent, while the consensual (indirect) reflex in the contralateral eye should be normal.

Neoplasia may occur anywhere throughout the central or peripheral nervous system.

Intracranial Neoplasia
The most common intracranial neoplasm in dogs and cats is meningioma. Anisocoria may result from disruption of either the afferent or efferent pathways of pupil innervation. Meningioma routinely occurs in the CN II, cerebrum, brainstem, and spinal cord. Glioma, lymphoma, peripheral nerve sheath tumors, and cranial thoracic masses may cause anisocoria but are less common.

Iris & Ciliary Body Neoplasia
Neoplasia of the iris and ciliary body can also cause anisocoria, through prostaglandin-mediated uveitis (miosis), secondary glaucoma (mydriasis), synechia formation (miosis, mydriasis, or dyscoria), or mass infiltration of the iris with subsequent physical obstruction of the pupil.

Sympathetic Dysfunction
Approximately 50% of dogs with sympathetic dysfunction (commonly termed Horner’s syndrome) are diagnosed with idiopathic dysfunction.3 The lesion may be located in the second or third order sympathetic neuron based on pharmacologic testing.4-6 No treatment is indicated for these animals and many spontaneously recover.6

Dysautonomia
Dysautonomia is an idiopathic disease that affects both branches of the autonomic system. Risk factors for development of dysautonomia include young to middle age, medium to large breed dogs, and living in rural housing.7

Many affected animals are visual, but demonstrate mydriasis with absent PLR, along with other systemic signs of autonomic dysfunction. Dysautonomia is not treatable; therefore, humane euthanasia is usually recommended due to poor quality of life.

Otitis Media
Otitis media accounts for 1% to 4% of the cases of sympathetic dysfunction in dogs and cats.3,8 While management of otitis is important, miosis often persists.

Uveitis
Uveitis (intraocular inflammation) can also cause anisocoria. Although this can occur as a result of iridal swelling, more commonly, prostaglandins active within the eye during acute inflammation act directly on the iris sphincter muscle to cause miosis. Thus, a unilateral or asymmetric uveitis can lead to anisocoria.9

Additional signs of uveitis include blepharospasm, episcleral hyperemia, deep corneal vascularization, diffuse corneal edema, aqueous flare, swollen and/or hyperemic iris, and decreased intraocular pressure. These should be assessed before a neurologic cause of anisocoria is investigated.

Posterior Synechia
Posterior synechia—adherence of the iris to the lens—can result in a fixed, nonmobile pupil that can either be relatively miotic, mydriatic, or abnormally shaped.

Immune-Mediated or Infectious Disease
Immune-mediated or infectious disease can affect any portion of the central nervous system (CNS), causing visual, sympathetic, or parasympathetic dysfunction in any combination.

The majority of dogs with immune-mediated CNS disease require immunosuppressive therapy to control their clinical signs; this, however, requires that infectious and neoplastic causes are first eliminated.10,11

Infectious agents implicated as causes of CNS disease include viruses, bacteria, fungi, protozoa, and, rarely, rickettsial infections. Treatment and prognosis varies depending on the cause of the infection.

Glaucoma
Glaucoma (increased intraocular pressure) can cause a unilateral mydriasis. The mechanism by which mydriasis occurs in glaucoma is not entirely clear, but likely involves iris or optic nerve dysfunction associated with elevated intraocular pressure. Other signs may include blepharospasm, episcleral hyperemia, deep corneal vascularization, and diffuse corneal edema.

Brachial Plexus Avulsion
Brachial plexus avulsion is a common cause of damage to the second order sympathetic neurons between T1 and T3. Brachial plexus injury commonly occurs after vehicular trauma and may result in partial or complete loss of the affected nerve roots. Amputation of the affected limb may be indicated if recovery is not likely; however, ocular sympathetic dysfunction does not resolve with amputation of the limb.

Head Trauma
Head trauma is a common cause of parasympathetic dysfunction due to compression of the midbrain at the level of the PSN CN III. Compression occurs secondary to hemorrhage or increased intracranial pressure, resulting in herniation of the brain.

Prognosis is guarded when miosis is detected, and grave after mydriasis, with absent PLR, is identified.1 Treatment to decrease intracranial pressure should be started as soon as possible.

Jugular Venipuncture
Jugular venipuncture can cause anisocoria due to iatrogenic damage to the second order sympathetic neuron as it courses through the jugular groove, deep to the jugular vein. Excessive probing for the vein may result in damage to this nerve. Care should be exercised when attempting jugular venipuncture, performing deep ear flushes, and using choke chains to minimize risk of trauma to the surrounding structures.

Disruption of Blood Flow
Disruption of blood flow to any part of the autonomic or visual system may result in compromised function. The cause is unknown in almost 50% of dogs with cerebrovascular disease, therefore, treatment is supportive.12 Treatment should be directed at the underlying cause in dogs for which a diagnosis is obtained.

Anisocoria may occur secondary to disease of the eye, optic nerve, and central and autonomic nervous system. Lesion localization is critical to developing an appropriate differential diagnosis list. This can often be effectively conducted using knowledge of the neuroanatomical pathways, along with standard cranial nerve testing.

Pharmacologic testing may help further isolate sites of dysfunction within the autonomic system. Further diagnostic testing should aim for an etiologic diagnosis and can be chosen based upon neuroanatomical localization. Treatment should always be directed at the underlying cause of anisocoria.