Small Animal Abdominal Ultrasonography, Part 1: A Tour of the Abdomen

A systematic pattern for scanning the abdomen 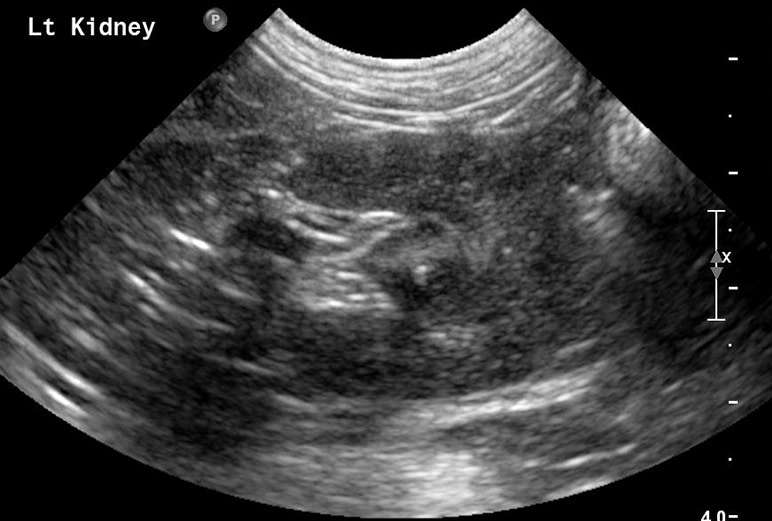 Welcome to our series of articles on small animal abdominal ultrasonography. The first 3 articles provided an overview of basic ultrasonography principles, while this article and the next will review a systematic pattern for scanning the abdomen. Future articles will discuss scanning principles and normal sonographic appearance of abdominal organs and systems as well as identification of common abnormalities seen during ultrasound examination.

Abdominal ultrasonography is a noninvasive technique that provides cross-sectional anatomy of the organs of the abdomen based on differences in acoustic impedance. The first 3 articles in this series have discussed:

A systematic pattern for scanning the abdomen is an important aspect of any abdominal ultrasound (US) examination. In approaching abdominal ultrasonography, the practitioner should identify the questions the scan needs to answer; however, a negative US scan does not rule out disease.

For abdominal US, the dog or cat can be in dorsal or lateral recumbency; both scanning techniques are equally effective. This article discusses a systematic approach to scanning the abdomen using a dorsally recumbent technique; however, the approach is just as applicable to scanning in lateral recumbency. The sonographer must learn to scan the patient in either position.

Basics of Driving the Transducer

There are 3 different types of transducer motions:

Figure 1. Transducer placement on the abdomen of a dog in dorsal recumbency: The transducer is placed perpendicular to the skin and is just caudal to the xiphoid process (A); the transducer notch is pointing cranially as the image is in long axis with the dog. The transducer angled cranially (B); all images would be considered long-axis views and in a sagittal plane.

The relative echogenicities can be remembered using the mnemonic For Most Cats Love Sunny Places, which designates a progressive increase in echogenicity:

Probe orientation and orientation of the image relative to the transducer can be confusing during abdominal ultrasonography. A notch on the probe has a “logo” that corresponds with the image display screen, identifying which way you are driving. 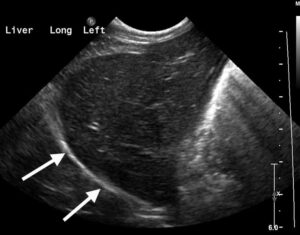 Look for abnormalities in the described size, shape, margins/contours, location/position, number, and echogenicity (a feature that replaces opacity for radiographic changes).

The hardest and most subjective aspect to evaluate is the relative echogenicity of a given organ or structure. It is easy to turn the gain too high or too low, resulting in images that are hyperechoic or hypoechoic overall, respectively (see Basics of Imaging Optimization—How to Obtain High-Quality Scans in the November/December 2015 issue).

In addition to the overall gray scale or echogenicity, the echotexture of the organ or structure of interest is also important (Table). 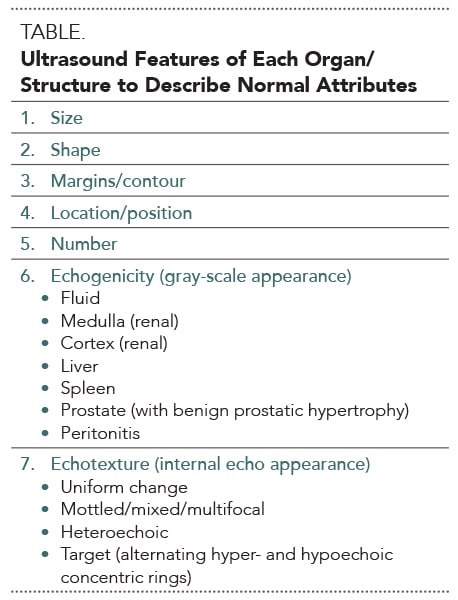 Make sure that all images are labeled appropriately, with correct orientation. These images will become an official part of the patient’s medical record.

Tour of the Abdomen

With the dog in dorsal or lateral recumbency, begin with the probe just caudal to the xiphoid process.

Ultrasound of the Liver 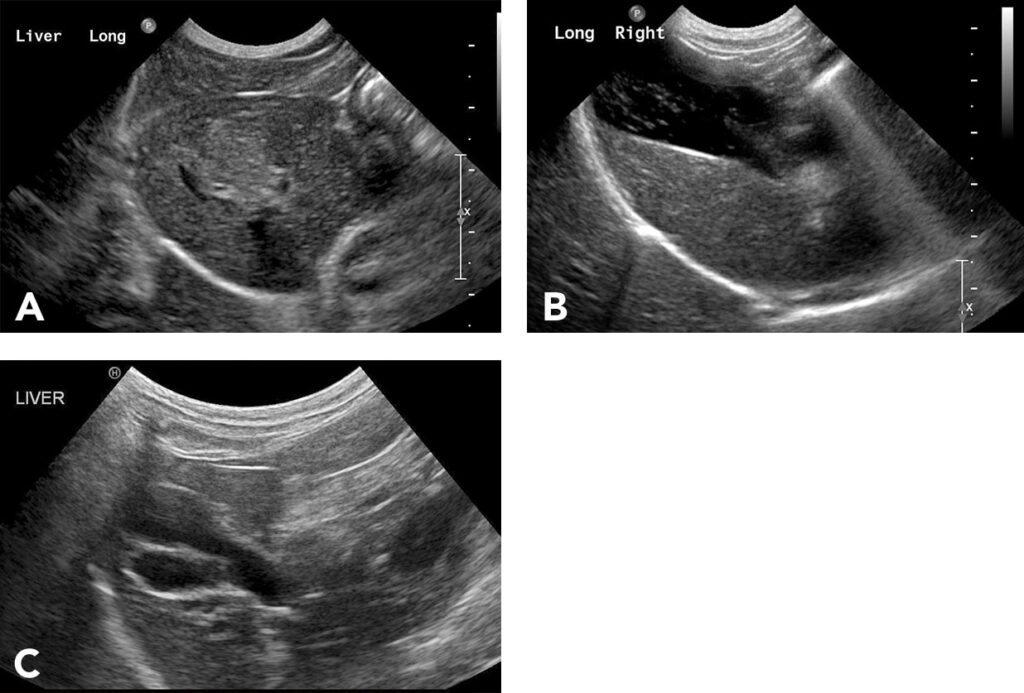 The normal liver has a coarse echogenicity and contains vessels: 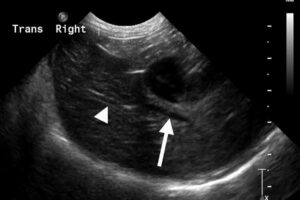 Figure 4. Short-axis (transverse imaging plane) view of the liver (right is to the viewer’s left). The hepatic veins (arrow) are the hypoechoic vessels without a bright echogenic wall, whereas the portal veins (arrow head) are the hypoechoic vessels with a bright echogenic wall. In the normal liver, portal veins usually dominate the landscape. 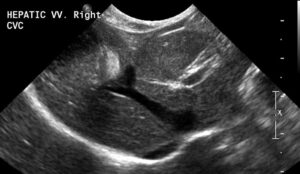 Figure 5. Hepatic vein entering the caudal vena cava as it courses through the liver (quadrate lobe).

Fat within the falciform ligament is seen in the near field, particularly in cats. This fat can be isoechoic to the liver (Figure 6). Distance motion may need to be used along the costal arch on both the right and left side to evaluate the entire liver. In some dogs, an intercostal approach is necessary to evaluate the liver and gallbladder. This is usually the case in deep-chested breeds or dogs with small livers and a barrel-chest conformation. 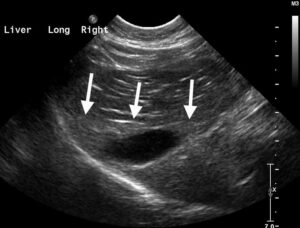 As with all US examinations, make sure to visualize each organ or structure in 2 imaging planes; rotate the probe 90 degrees to view the liver in transverse plane prior to moving on to the next organ.

Ultrasound of the Stomach

From the xiphoid position, slide the transducer caudally so that the stomach is in short axis (in transverse section) even though the transducer is still aligned with the long axis of the patient (Figure 7); then evaluate the stomach in its entirety in both long- and short-axis images. When the transducer is swept toward the right side, the pyloroduodenal junction is visualized as the thickened area of the muscularis between the pylorus and proximal duodenum.

Figure 7. Long-axis image of a transverse section of the body of the stomach in a dog (A) and cat (B). In the cat, the bright submucosa is seen to be hyperechoic due to the fat deposition in this layer (arrow).

Ultrasound of the Spleen

Slide the transducer caudally and to the left to identify the spleen. Initially evaluate the spleen in transverse section, even though the probe is still oriented along the long axis of the patient. In the dog, the spleen is a large structure that extends across the abdomen from the left side (head of the spleen) to the right side (tail of the spleen, Figure 8). The feline spleen is a very small and thin structure (usually 5–7 mm thick) found in the left cranial and lateral abdomen in the near field (Figure 9). 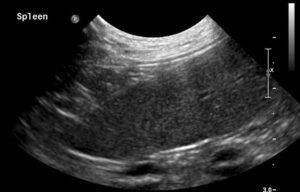 Figure 8. Long-axis image of the spleen in a dog. The spleen is seen in a triangular transverse plane due to its orientation as it courses from the left to the right side of the abdomen. 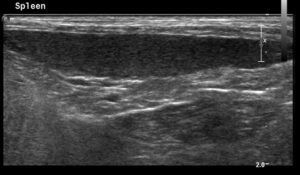 Figure 9. Long-axis image of the spleen in a cat. The spleen is also superficial but is smaller in the cat. This spleen is relatively hypoechoic to the surrounding fat but, in some cats, it can be isoechoic and, therefore, difficult to identify.

From the level of the spleen, move the transducer with a medial and slightly caudal distance motion to identify the left kidney (Figure 10) and evaluate the kidney in long and short axes. From the left kidney, angle the probe medially; the abdominal aorta is seen in long axis (Figure 11). The celiac and cranial mesenteric arteries and the left renal artery form the cranial and caudal vascular delimiters, respectively, for the area where the left adrenal gland can be found (Figure 12). Part 2 of this article will discuss identification of the right kidney and adrenal gland.

Figure 10. Long-axis sagittal (A) and short-axis transverse (B) imaging planes of the left kidney in a dog. 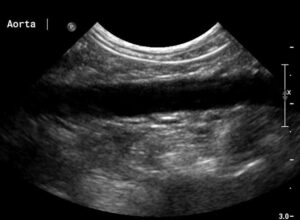 Figure 11. Long-axis image of the abdominal aorta in a dog; the cranial direction is still to the viewer’s left. 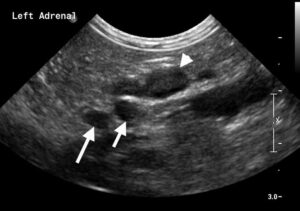 Ultrasound of the Left Ovary

The left ovary in an intact female is located caudal to the left kidney in the near field (Figure 13). Depending on stage of estrus, the ovary can be indistinguishable from the surrounding fat (anestrus) or can be seen as a hypoechoic structure with multiple anechoic cysts (estrus). 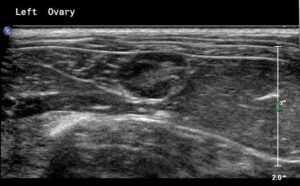 Figure 13. The left ovary is seen as a hypoechoic structure relative to the surrounding fat. This image was obtained from a dog. The transducer has been placed just caudal to the left kidney.

Ultrasound of the Urinary Bladder

Move the transducer caudally to a central and caudal abdominal position. Evaluate the urinary bladder in long and short axes (Figure 14). Always evaluate the trigone area carefully, particularly as it extends caudally into the urethra or prostate gland (if the dog is a male) (Figure 15).

It is important to be systematic about your examinations and make sure that all images/video clips are correctly labeled and all normal/abnormal findings are well documented for future reference, particularly when follow-up evaluations are used, as in complex medicine cases or oncology cases. Part 2 of this article will review further exploration of the abdomen.